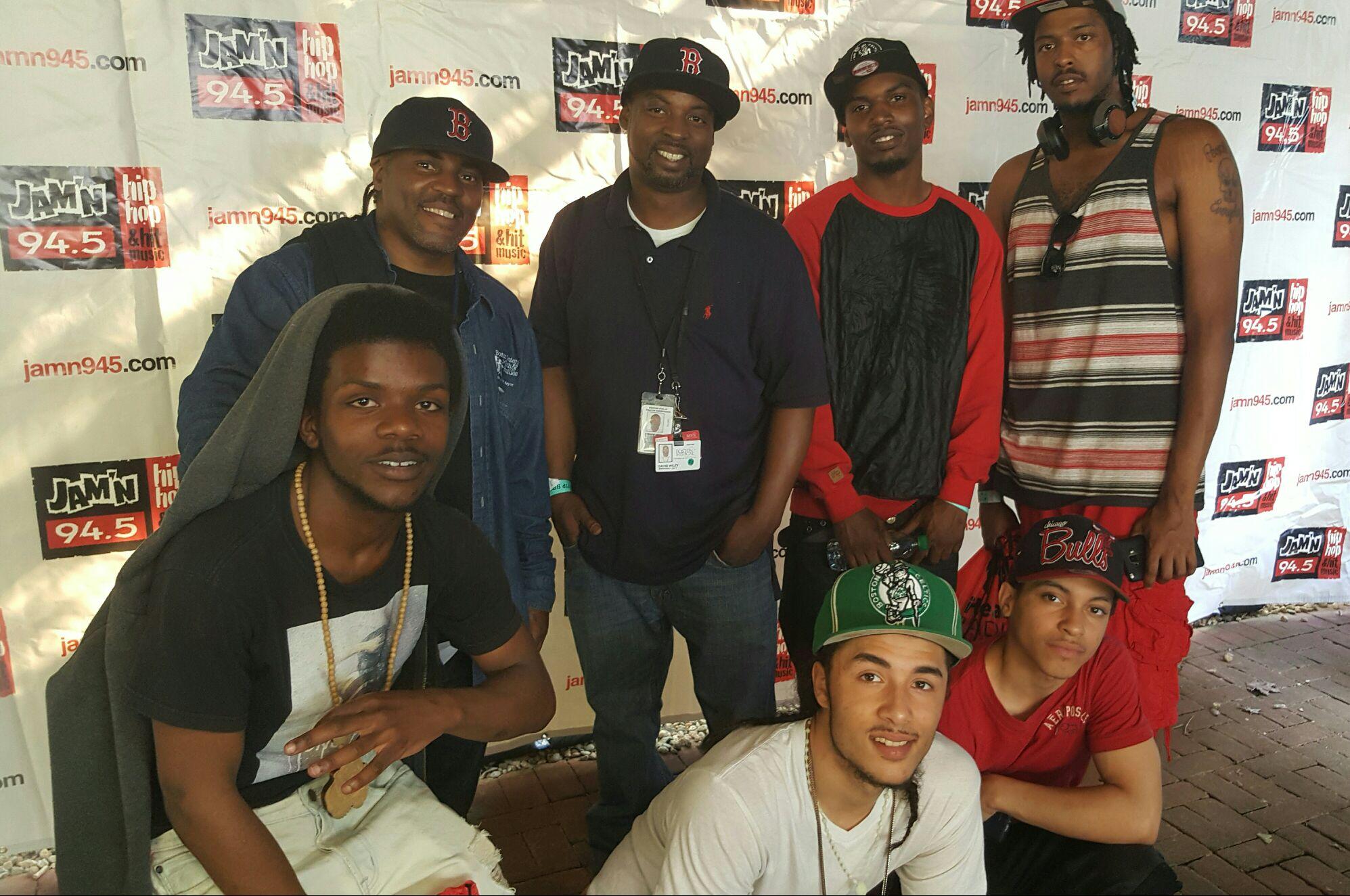 How do you eliminate an infectious disease that kills thousands of young men every year in the U.S.?

An innovative program at the Boston Medical Center (BMC) has been a leader in a national movement to re-think the strategies used to prevent community violence, and to heal the individuals and communities most susceptible to the potentially-debilitating impacts of that violence.

Data shows that homicide is the most common cause of death for black males, 15 to 34 years old in the United States.1 The Violence Intervention Advocacy Program (VIAP) at BMC has found that when community members, service providers, law enforcement, and policymakers are able to expand their understanding and view violence as a public health problem which infects whole communities, new possibilities for solutions emerge.

Dr. Thea James, now the Vice President of Hospital Mission at Boston Medical Center, and an Emergency Room doctor, founded VIAP in 2006. She noticed that many of the gunshot wound victims she was treating in the Emergency Room at BMC had been previously treated for similar injuries.

Studies show that exposure to violence is a strong predictor of future violent injury.2 Up to 45 percent of those shot or stabbed are assaulted again, and some act out violently against others.3,4

Dr. James noted that each assault traumatizes many people beyond the direct victim --  including siblings, partners, parents, children, friends, and others in the community. VIAP’s staff approach community violence like any other disease that spreads through exposure, and can be most effectively addressed by identifying and treating the underlying causes and risks, rather than just mending the physical wounds or symptoms.

Merriam-Webster defines “contagious” as a behavior “exciting similar emotions or conduct in others” like “contagious enthusiasm” or “contagious laughter.”

The dictionary doesn’t mention “contagious” violence. But research on traumatized populations show that it works the same way.

The range of complicated emotional responses to trauma can excite “similar emotions or conduct,” often leading to more violence -- against oneself, loved ones, and others in the community. So, in a moment of vulnerability, when an individual infected by repeated experiences of violence perceives a new threat, responding violently often seems like a viable (or maybe even the only) survival strategy.

And the contagion spreads.

In communities with limited safety, health, economic, and educational resources to reduce physical and emotional vulnerability, transmission rates can be particularly high.

That’s where VIAP steps in to help stop that spread.

VIAP staff approaches anyone being treated in the Emergency Department (ED) at BMC who has been intentionally shot or stabbed. As the largest safety-net hospital in New England. BMC serves a predominately low-income, uninsured, and vulnerable population. Nearly 70 percent of the people VIAP serves (about 345 clients annually) are boys and young men of color.

VIAP’s Trauma Response Team staff, Rusti Pendleton, and Donald Osgood, are placed full time in VIAP through a collaboration with the City of Boston and the Boston Center for Youth and Families Streetworker Program. They are usually VIAP’s first point of contact, responding to the hospital shortly after a victim of shooting or stabbing arrives.

“Being in the community and maybe knowing the family, or I may know an individual, it can be an easier conversation for us,’’ Pendleton said. “We can help be a buffer.”

VIAP program manager, Elizabeth Dugan, explained that, added to the medical interventions provided by the ED staff, VIAP is able to offer individuals who have been victimized services to promote healing from the psychological aftermath of the assault.

Each person is assigned a support team; an advocate to help navigate systems and to stabilize day-to-day living; a family-support person to help those close to the individual who’s been shot or stabbed; and a mental health clinician, to address the resulting emotional trauma. VIAP is able to offer a comprehensive array of supportive services for two years or more after the initial assault, including mentoring and educational opportunities.

“Our approach works because we’re genuine,” explains Kendall Bruce, one of VIAP’s Violence Intervention Advocates. “We’re not going in there telling you to change your life. I’m just telling you what it can be, if you choose to take this route with me. Usually people don’t get to hear those hard conversations. I’m here to put it on the table when you’re in that vulnerable position. Let’s get to the nitty-gritty. I got you! Everybody I’ve met respects that and is willing to work with it.”

A new demonstration project, funded by two grants from the U.S. Department of Justice, Office for Victims of Crime (OVC), is providing access to job training and placement, and housing. These basic needs were identified by VIAP clients as critical to helping individuals build a productive and hopeful path to healing, and to move away from the cycle of violence. Opportunities for gainful employment and affordable housing provide people recovering from being shot or stabbed alternative strategies to the survival options they’ve previously had.

“This is not just about an apartment or a job,” explained Curtis Santos, a Violence Intervention Advocate and Housing Specialist. “This is about a mindset and life skills. They’ve been through a lot. They need to believe change can happen and that they deserve it. We work with them to make sure they have a stable job and are saving money; that they have a self-sufficiency-goal plan; that they’re looking forward.”

Of course, trust is key. And VIAP has had to overcome challenges forming trusting relationships, not just with the highly traumatized people who have been victimized, but also with providers and professionals who may historically view the victims of community violence with fear and suspicion.

Even among hospital staff and other providers with good intentions and a commitment to healing and recovery, deeply-held biases, assumptions, and judgmental attitudes often cloud how these victimized community members are viewed and treated, Dr. James noted. Responses based on notions of “worthy victims” and “unworthy victims” can further traumatize individuals and families desperate to feel safe, and can limit their sense of options.

Dr. James explained that providers can unconsciously set a low bar for victimized people, conveying the belief that “that’s all that’s possible for you because you’re who you are, and you came through these doors. They get stigmatized,’’ she said. “From the day this program started, it’s been about setting a higher bar for what’s possible. We want to be aspirational for the people” VIAP serves.

The VIAP Program is a founding member of the National Network of Hospital-based Violence Intervention Programs (NNHVIP), a collaboration of 34 hospitals around the country using a public health approach to fight the spread of violence. VIAP has developed an elective option for medical residents in the Emergency Department. So far, nine doctors have spent their entire rotation shadowing VIAP staff, including home visits, and providing support at court and school meetings, where they learned important lessons about the challenges patients face.

Over the past 11 years, VIAP has nurtured partnerships with the Massachusetts’ Governor’s Office, Boston’s Mayor’s Office, and other programs serving vulnerable populations in the city. These include the Boston Public Health Commission (which funds one full-time Violence Intervention Advocate), Boston Public Schools, Police and Sheriff’s Departments, the District Attorneys’ and Probation Offices, and corrections systems, youth-serving agencies and mental health programs, all crucial alliances in the effort to change practice.

Training partner agencies and providers about the value of viewing people who have experienced violence through a lens of Trauma-informed Care (TIC)5 has been a key part of transforming the culture of violence intervention in Boston. “Trauma-informed” practice frames commonly-seen responses, including non-compliance, anger, and defensiveness, as normal and predictable (if often counter-productive) coping mechanisms after a traumatic experience, rather than evidence of character defects or resistance to help.

Dugan noted that “the special thing we do is about respect, empathy, and empowerment.” Changing deeply-held attitudes and norms can be a slow, often frustrating process, she said. “It’s sometimes five steps forward and two steps back,”

Still, Dr. James believes that great progress has been made. As others gain a new understanding about the spread of violence, some are starting to ask the right questions.

“Like, what’s causing you to be in this situation and to have this wound? How did this happen?’’ she explained. “Even on a purely medical basis, like for high blood pressure, if I don’t know that, I don’t know where to begin, and I definitely can’t prevent it from happening again.”

“You can’t just treat the disease or make an assumption that they’re non-compliant. That doesn’t make sense to me. Why would people choose to be sick rather than be well?  There’s usually a reason. So, I want to know how that happened. And, if you ask, you usually get the right answers.”

Peter Pollard is a Visiting Fellow at the Office for Victims of Crime (OVC), U.S. Dept. of Justice.  He has worked for the last 30 years as a violence prevention and intervention specialist

including 15 years as a state, child-protection social worker; communications director for 1in6, Inc. national organization serving men who have had unwanted or abusive sexual experiences; and as a group facilitator for males participating in an intimate-partner-abuse-prevention program. Since 2003, he has served as the Western Massachusetts coordinator for SNAP (Survivors Network of those Abused by Priests).