The word puberty is derived from the Latin word “pubertus” which means “age of manhood.” It refers to the biological developments that lead to physical maturity and capacity for reproduction. There has been a secular (time-related) trend towards an earlier onset of menarche with a decline of two to three months per decade [Wyshak, Tehrani] An Indian study has shown that in the last three decades, the age at menarche has been lowered at an average rate of about six months per decade and reflects upon the improved socio-economic, nutritional, and general conditions in India. [Bagga]

This study was undertaken with the research question, “Do children with higher growth parameters attain menarche earlier?”

Study Design: This is a cross-sectional study on rural school going girls.

Study population: Girls in the age group of nine to 15 years studying in rural schools.

Approval for study: The study had been done only after receiving approval from the institutional review board and ethics committee. The school principals had been approached for permission to do the study and written informed consent had been obtained from the parents and the girls.

All girl children in the age group of nine to 15 years studying in the rural school were enrolled to the study if they fulfilled the selection criteria and their parents had given the consent.

Children who were absent on the day the data was collected and who had given back the consent form.

Children had been enrolled from selected schools in this rural area by consecutive sampling. Every girl child in the selected classes who had fulfilled the selection criteria and whose parents had given informed consent had been recruited to the study till the sample size was achieved.

Sample size was calculated using nMaster Sample Size computer software. [N Master] In the reference study by Bagga and Kulkarni done in Pune, the mean menarcheal age was found to be 12.5 years. Of the 366 girls majority (68 percent) achieved menarche between the ages of 12 years and 14 years. The early onset of menarche was recorded in 18 percent and late onset in 13.6 percent of the girls. [Bagga]

Using the mean values from the above study which reported early menarche occurred in 18 percent of girls in the study sample of 366 girls. The Sample size was 227 girls for a single group for a confidence interval of 95 percent and estimated precision of five percent. The required sample size will be 227 girls in the age group nine to 15 years studying in rural schools. The formula is given below.

Sample size was calculated using the formula given below. 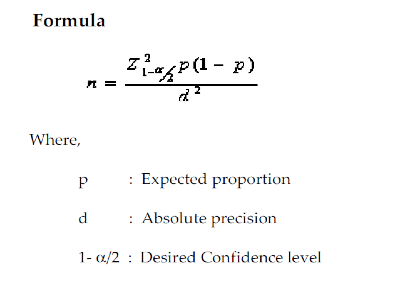 The sample size for a 95% confidence interval and precision of 5% required will be 227 rural girls in the age of 9 to 15 years.

The study had been submitted to the Institutional Review Board for scientific review and to the Ethics Committee for ethical review. After permissions were obtained from the school principal, the parents had been approached to obtain written informed consent. All girls were children in the age group nine to 15 years, whose parents had given written informed consent and had been consecutively enrolled to the study if they fulfill selection criteria.

The demographic data, relevant history, and anthropometric measurements had been entered into the Case Study Form. The children had been divided into two groups: early and average menarche. The demographic variables and risk factors had been compared in the early and average menarche groups using Chi square test for categorical variables and student t-test for continuous variables using SPSS software.

The study will be conducted after we receive permission from the school authorities and written informed consent from parents and also from the girls participating in the study. A handout will be given to all children detailing the principles of good menstrual hygiene. The investigator will take a class for the children and explain the basic physiology and the good practices of menstrual hygiene.

Of the 227 girls, majority (62.6p.c) achieved menarche between the ages 12-15 years and early onset of menarche in age nine to 11 years was recorded in 37 percent of girls.

Table 1: Anthropometric values such as mean weight, mean waist circumference and BMI had significant impact on attaining early menarche. The girls who achieved menarche earlier (between 9-11 years) showed the maximum mean body weight (52.35kg) than other group, being 4.42kg more than average group who showed (47.93kg). 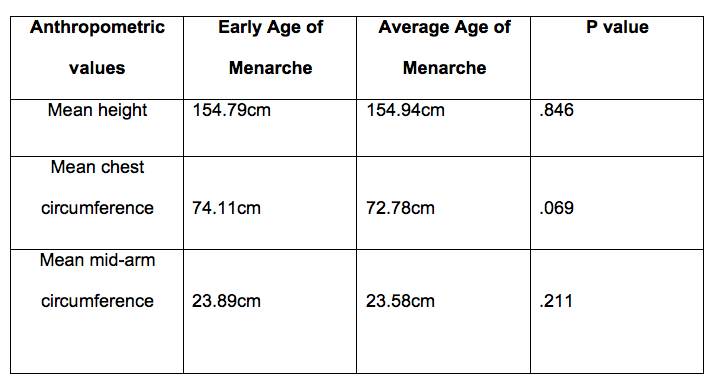 Table 2: Mean height had no impact on attaining early menarche except for mean chest circumference and mean mid arm circumference the difference between early and average menarcheal group were statistically significant.

TV Viewing and Age at Menarche

From the above figure there is secular trend in attaining early menarche for those girls who viewed TV more time than the average group. This would be due to sedentary lifestyle which leads to early Menarcheal age. The p value was found to be .054. 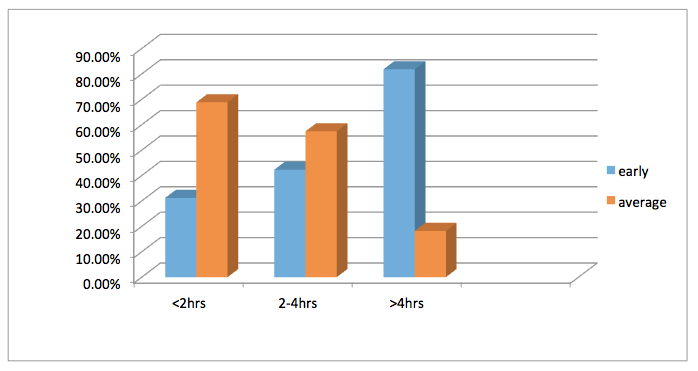 From the above figure, there is again secular trend in attaining early menarche for those girls who played more computer and mobile games than average group. This would be a changing sedentary lifestyle that these girls attained early menarche. The p value was found to be .009. 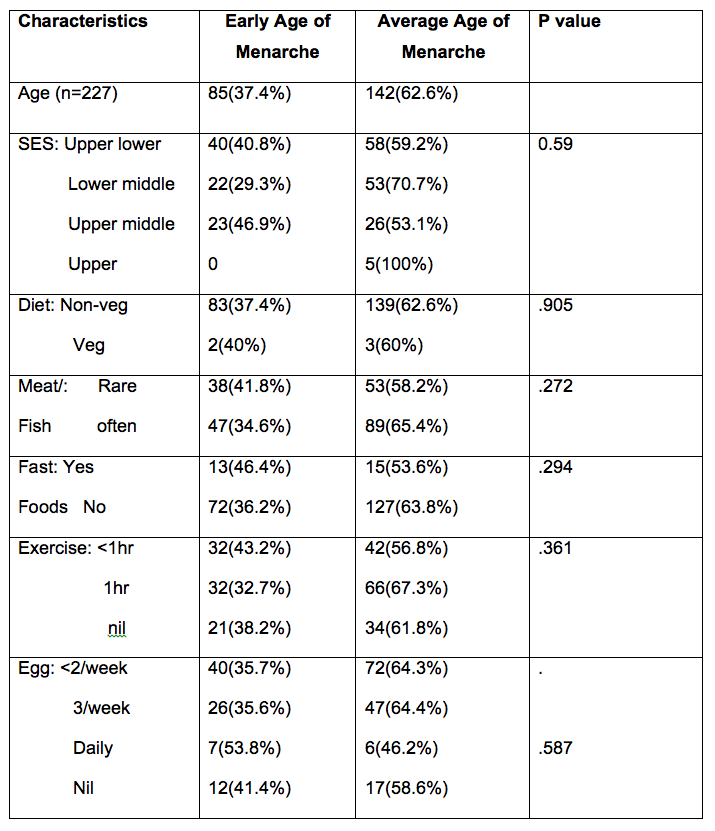 The prevalence of early menarche was found to be 37 percent.

This will be a valuable experience for me to develop skills in interviewing, history-taking, and clinical examination of a child. It is important to use the principles of research methodology and good practices in research and I hope to use these principles in this study.