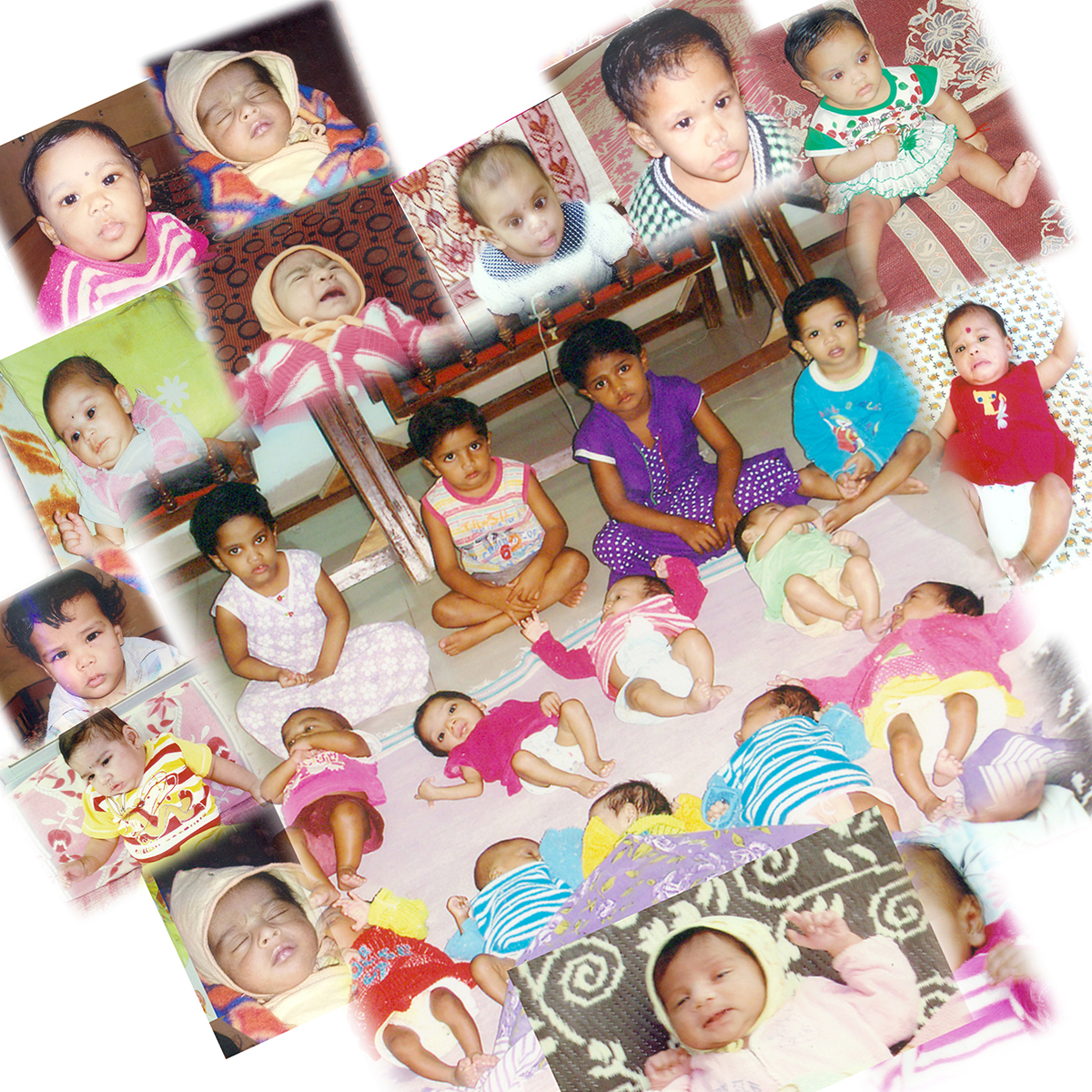 The babies of the Aakanksha, Shishu Kalyan Kendra Women and Children Centre (Babies’ Home), Mahatma Gandhi Institute of Medical Sciences, India. The Center’s name translates to Baby Ambition Welfare Center, reflecting that dreams for the infants’ safety, wellbeing, and future can all be accomplished.

Adolescents with unwanted, advanced pregnancy who seek abortion late are in danger of getting killed, their babies are in danger of dying in utero, immediately after birth, or during infancy. Complications of unsafe interventions remain a major public health issue globally.

Girls who reported for abortion with pregnancy beyond 20 weeks (under India’s abortion law) knew about pregnancy, were counselled and offered medical, social, and financial help to safely deliver and legally surrender their baby to the Aakanksha, Shishu Kalyan Kendra Women and Children Centre (Babies’ Home) under India’s legal system. Most girls were admitted, some were not, but those who came back, had a safe birth and babies were legally adopted. It was long journey filled with obstacles before a system of local, legal adoption was established.

Over three decades 547 girls were helped, with the youngest 12 years of age. 147 girls were victims of rape under Indian law because they were in relationships and under the age of 18 and therefore unable to consent, while 26 girls were victims of sexual assault. In addition, abandoned babies were brought in by police from temples, railways, hospitals, and farms. Some babies brought in had defects but were helped and under the local system there were 203 direct adoptions during the last decade.

The mission of preventing deaths, disabilities with long term health impacts, honor killings, dangerous interventions for termination, and enabling girls to lead normal lives was achieved with the safe survival and adoption of unwanted babies who brought joy to infertile couples wishing to become parents.

Unwed mothers many times do not seek abortion in time, and report unwanted, advanced pregnancy when abortion is no longer an option under Indian Abortion Law. They are then in danger of getting killed, (an honor killing), committing suicide, or suffering health complications due to unsafe interventions. Their babies are in danger of dying in utero, immediately after birth, or during infancy due to complications. Unsafe interventions to terminate an unwanted pregnancy remain a major public health issue around the world (Neutiyal et al 2012, Stubblefield et al 2012). Preventive strategies to reduce the problems that arise due to unsafe termination interventions are essential. Unfortunately, prevention of death from abortion remains more of a political issue than a medical one. Laws are made to clarify what is legal and what is illegal. However, a law’s first purpose is to prevent unjust action, yet the question of unjust to whom and by whom are big questions which need deliberation. There is a need for society to take action now.

In Indian sociocultural milieu, an unwed pregnancy is a social stigma. It not only ruins the girl’s life, but her family’s too. While advocacy of “do and don’ts” for young girls continues in families and society, girls do indulge in sex either because of their own desire or because of exploitation by relatives or friends and rape by acquaintances and strangers alike is not rare. Resulting pregnancies are responsible for suicides, honor killings, sufferings of the mother, and even the loss of babies. India has a liberal abortion law under which pregnancy can be terminated up to 20 weeks for various reasons. However, there are problems with many girls seeking an abortion because of the lack of awareness, availability of services, and resources among other reasons. Oftentimes, unwed mothers with advanced unwanted pregnancy are reported or brought in by mothers, relatives, and neighbors due to the distension of an abdomen that is thought to be a tumor and the diagnosis of pregnancy is a shock for their family. When abortion is refused, termination of pregnancy is somehow attempted at home or in unsafe places by untrained health providers which can lead to death, permanent problems, and the loss of the baby. Tracking girls in this situation is impossible because usually false addresses are given.

The objective of this work is to share information about social responsiveness to help unwed adolescents and widowed mothers with unwanted advanced pregnancies.

In response to all of the problems girls with unwanted advanced pregnancies face, socially responsible treating clinicians created a system under which the hospitalization of girls with unwanted advanced pregnancy were helped. This was in response to the girls’ feelings of insecurity with staying at home due to the social stigma attached to their circumstances. In the hospital they were provided safety, meals, medication, and a safe delivery. Safe abortion services were always available for those reporting pregnancies under 20 weeks of gestation. In the beginning the babies delivered were sent with their mothers to nearby babies’ homes. It was difficult to reach the homes and track the mothers and babies. Oftentimes when social workers checked in to ensure that they reached the place for legal surrender, the deaths of the babies and other problems with the babies were revealed. So, another system was created under which social workers from better run babies’ homes came to the place of birth. Mothers could surrender babies, but the legal system did not permit surrender to distant babies’ homes. Eventually, one of the babies’ homes opened a branch nearby the hospital but the branch was required to have a license which they were unable to attain. A licensed home for babies, The Aakanksha, Shishu Kalyan Kendra Women and Children Center (Babies’ Home). was then started at the same location where the system for safe births was created. Abandoned babies, be it at temples, farms, roads, railway stations, or hospital gates, were also admitted to the home through the legal system. It has been followed by a licensing for national adoption which has become an international license under current adoption laws.

Over the years, 547 girls, nearly all of whom were unwed although a few were widowed, with advanced unwanted pregnancy reported that they were helped, with the youngest, a 12-year-old girl. Abandoned babies were brought by the Woman and Child Department of Government police and those who had defects were helped through surgery. There have been 203 direct adoptions under this system during the last decade.

In the beginning, civil society management had apprehensions about helping adolescent girls with advanced unwanted pregnancies, later of keeping such babies and their eventual adoptions, especially overseas. However, results demonstrated, two lives were saved, two families were given an opportunity to be happy, and so the system was embraced. Human rights issues came about with cases where the baby’s life was lost, with babies who had low birth weights, or anomalous babies. However, most babies are happily living with families or in the Babies’ Home. Along the path it was realized that there was a lack of awareness, availability, and/or use of contraceptives. Many times girls had no knowledge about how conception occurred. In view of the information gathered from these unwed girls about the lack of knowledge of conception, beginning in the year 2000 Family Life Education (FLE) has been imparted in schools in the district which have a population of around 1.5 million. The stakeholders (education and administrative departments of state government and civil society) have been involved. Adolescent school girls are provided information with visual aids in local languages about their growth and development, menstruation, conception, contraception, prevention of sexually transmitted diseases including HIV/AIDS, safe abortion, safe birth, and breastfeeding. Adolescents are also helped in finding answers to their doubts and dilemmas about reproductive health to ensure that there is a promotion of overall health of adolescents’ preventive, curative, rehabilitative, and promotive health (Chhabra 2016). The mission is the prevention of deaths and disabilities with long-term health benefits to adolescent girls who should be able to lead normal lives. They become better prepared for their role as mothers, knowledgeable about the prevention of sexually transmitted diseases, and learn the essentials of safe birth and care of a baby. Many infertile couples go from pillar to post seeking pregnancy and oftentimes fail to get pregnant even after assisted reproduction. Under this project the unwanted babies of unwed mothers are surrendered under the legal system to adoptive parents who desperately want a baby thereby creating a new joyful family.

If mothers need further help in rehabilitation they are also provided support. However, utility of this remained limited because the attempt to help them become self-sufficient was not well received because of social issues. The girls do not wish to stay in the same area or be around people they are recognized by. However, some girls have been rehabilitated by taking positions in households, or even as nurse assistants or seamstresses. Over time their confidence is rebuilt as they earn money and settle down and have the possibility of a bright future ahead of them.

Sensitization of health professionals, medical students, and nurses towards the needs of society requires action and sustainability is essential. In the beginning, Children Protection Fund, Aarhus, Denmark, a nongovernmental organization, helped in running the project for unwed girls with advanced unwanted pregnancy and running the Babies’ Home for some years. Now the system is almost self-sufficient with some support from the Medical institute, Kasturba Health Society, Sewagram, and philanthropists.

This project demonstrates the effectiveness of comprehensive care of adolescent girls in a cost effective and sustainable way from a clinical department of a medical educational health care institute. It involved midwifes, social workers, postgraduate students, in addition to stakeholders, a health care medical education institution, communities, and government. The startup phase of this project was made possible with the support of an international nongovernmental organization focused on saving adolescents’ lives, promoting their health, and couples who wanted to become parents being paired with as a one-of-its-kind program in this country. At this institute there are medical and nursing students from all over the country and neighboring countries so this project is sure to have a ripple effect.

A simple step can help by providing social justice to many unwed girls and women with unwanted advanced pregnancy, enabling the safe survival of unwanted babies, and help to parents and babies in becoming families. Unwanted babies of unwed mothers now are longed for and bring joy to infertile couples who want to be parents from around the globe – there were a lot of obstacles on the journey of this program but it we have reached our destination – a successful program protecting the lives and health of unwed mothers, ensuring safe delivery and surrender of their babies, and creating new families across the globe.