Elderly immigrants are among southeastern Pennsylvania’s most vulnerable residents, and providing cost-effective, culturally and linguistically targeted services for this population is a pressing challenge facing nonprofits in the Philadelphia region. Southeastern Pennsylvania’s Asian population increased by 58% in the past 10 years according to U.S. census data, much faster than the 5% growth in the region’s population. The Asian American community’s demographic expansion tells a story of vibrant, growing communities; however, a corresponding increase in the needs of the most vulnerable, particularly the elderly, has accompanied this growth. Asian seniors are more likely than other seniors to face language and cultural barriers in accessing needed social services including health information, public benefits, housing, socialization and recreation activities and transportation. While only 12% of seniors in the United States are immigrants, 81% of Asian seniors were foreign-born. Additionally, 60% of Asian seniors report speaking English “less than well” compared with 8% of all seniors, and 12.5% live below the poverty line compared to 10% of seniors nationwide (Asian American Federation 2009). Asian seniors are thus more likely than other seniors to encounter linguistic and social isolation and live in poverty.

Despite the Asian American community’s growth, few senior centers, government agencies and other social service agencies in the region have the linguistic and cultural skills necessary to meet the needs of Asian seniors. Additionally, nonprofits serving Asian seniors in the region are often fragmented and lack the financial resources to offer high-quality programming for Asian seniors.

PASSi has established trust between southeastern Pennsylvania’s Korean community and its 13 bilingual, skilled administrative staff capable of supporting programming for Korean seniors. PASSi’s mission is to support the well-being of ailing Asian American seniors disadvantaged by language and cultural barriers, and 100% of the Asian seniors PASSi serves are low-income.  PASSi currently provides home care to 393 frail, elderly Asian Americans, approximately 100 of whom are Korean seniors.

KSCAGP is a nonprofit organization led by Korean seniors that was founded in 1971 to meet the needs of Philadelphia’s growing number of Korean seniors struggling to adapt to life in the United States with limited financial resources. With more than 60 active members, KSCAGP offers weekly senior programming that educates seniors about American culture and improves their English skills; organizes interactive workshops on a variety of health, civic and social topics; and offers free music and dancing classes.

KSCAGP initially relied on donations from small Korean-owned businesses to fund its operations and weekly senior programming. Since the 2008 recession, KSCAGP has found it difficult to raise funds for its weekly senior programming from the local Korean business community. Additionally, KSCAGP lacks any paid staff and its leadership speaks limited English.  KSCAP thus lacks the administrative capacity to secure other funding streams and is not equipped to meet the growing demand for senior programs among low-income Korean seniors in Philadelphia.

PASSi and KSCAGP secured a $20,000 Targeted Investment Grant from the United Way of Greater Philadelphia and Southern New Jersey to fund a strategic alliance focusing on joint programming for Korean seniors. PASSi and KSCAGP share the goal of assisting English-limited Korean seniors in Philadelphia and have a long history of collaboration. The United Way funding allowed the organizations to expand an existing partnership and create a strategic alliance that has increased the capacity of both organizations to serve Korean seniors.


KSCAGP now has access to PASSi’s bilingual administrative staff, and the capacity to pursue diverse funding streams. The strategic alliance has increased KSCAGP’s administrative efficiency and the quality of its senior programming while still allowing Korean seniors to lead KSCAGP. This saves KSCAGP money and allows KSCAGP to allocate its limited financial resources to programming rather than overhead and salary expenses.

Additionally, PASSi and KSCAGP have qualitative evidence that Korean seniors are extremely satisfied with the improved programming. The strategic alliance has allowed PASSi and KSCAGP to move the programming location from KSCAGP’s office in Northeast Philadelphia on Rising Sun Avenue to Hankuk Daily News’ Cheltenham office. KSCAGP’s office lacked space for exercise programming, was poorly maintained and was inconvenient to public transportation. Hankuk Daily News’ office is located close to public transportation and Philip Murray House, a large senior housing complex with a significant concentration of Korean residents. PASSi and KSCAGP used the larger facility to add line dancing, a popular activity with Korean seniors, as an important part of the program. This provides a fun way for Korean seniors to remain physically fit. 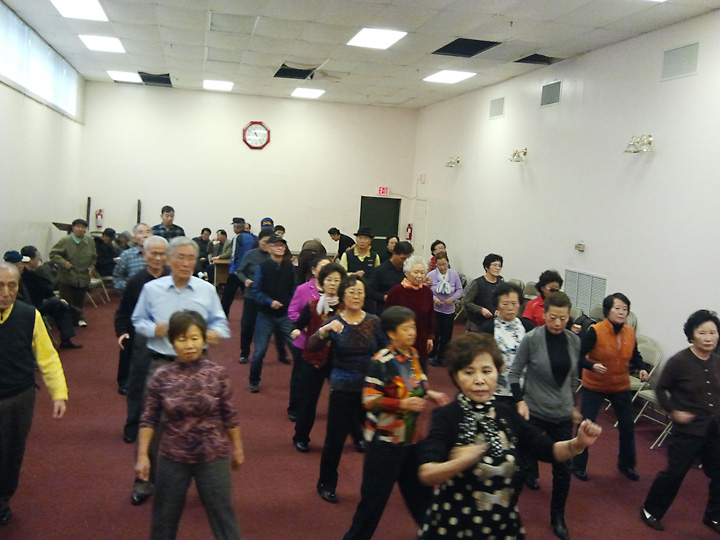 In addition to finding a better location, KSCAGP and PASSi have leveraged the strategic alliance to enhance the quality of programming. Previously, KSCAGP only had limited funds for refreshments and usually ordered pizza. Pizza has poor nutritional value and is not especially appetizing for Korean seniors who strongly prefer Korean food. KSCAGP and PASSi used their shared resources to purchase Korean lunch boxes for all attendees. These lunch boxes include a choice of sautéed beef, chicken, or pork, fish, rice, and vegetables prepared Korean style. This hot, nutritious meal is a very important benefit for Korean seniors who often are too old to cook for themselves and have limited means to purchase healthy food.

PASSi has leveraged its strong community connections to enhance the senior program’s content.  PASSi’s administrative staff worked with KSCAGP to identify topics of interest to Korean seniors and then secured Korean experts in the particular topic. Topics discussed at the weekly program include information about common diseases, nutrition, senior housing resources, transportation resources, the Access card for seniors, how to obtain American citizenship, personal safety in Philadelphia, acupuncture, herbal medicines, Korean verses American art, music, culture and many other topics.

Equally as important, the strategic alliance has increased interest among other Koreans in volunteering to help with KSCAGP and PASSi’s weekly senior program. The program now has three Korean volunteers who assist with logistics, publicity, and other items. These volunteers will help the program remain sustainable over the long term by reducing staff costs.

Patricia Hampson Eget is the fund development manager at Penn Asian Senior Services where she oversees all development activities. She earned a PhD in history from Rutgers University and a bachelor of arts from Johns Hopkins University. She lives in Philadelphia’s Fairmount neighborhood and is active in various civic organizations.