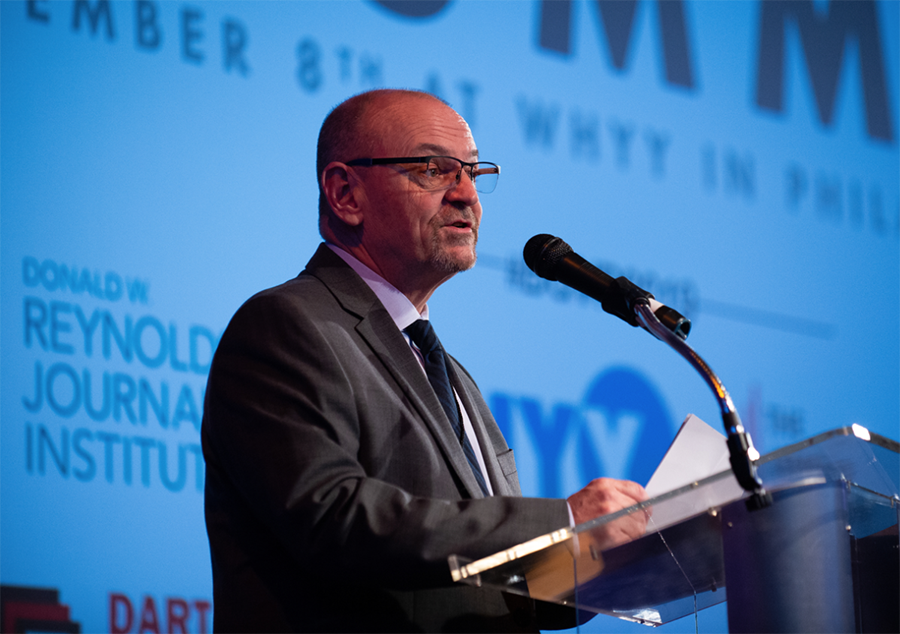 Before sitting down to talk with Jim MacMillan I did what any normal person would do before meeting with someone whom they had never met, I Googled him. I found myself feeling intimidated. His experience was distinguished, where he was a photojournalist for The Philadelphia Daily News, The Associated Press, and freelanced at The Boston Globe; he was the assistant director for external affairs at the Klein College of Media and Communication at Temple University; held instructor positions at the University of Missouri, Swarthmore College, Temple University, Tufts University, and New York University; and had been awarded with the Bayeux Prize for War Correspondents, National Headliner Award, and the renowned Pulitzer Prize. When I finally met with him, my feeling of intimidation immediately dissipated when he expressed genuine interest in my group’s work, and I learned about his incredibly warm and humble character.

Humble is also the best word to describe his leadership style, though he doesn’t self-identify with any approach or theory. Humble leaders foster a collaborative, trusting environment with mutual respect and they understand they have limitations in their knowledge. They listen to others well, are open-minded, and value opinions from all. Complementary to his humble leadership, his strengths include being a life-long learner and a “connector.” Prior to his career in reporting, he earned a bachelor’s of science in Education at Tufts University, and completed mid-career fellowships from the Dart Center for Journalism and Trauma at Columbia University, the Philadelphia Social Innovations Lab, the Knight-Wallace Fellowship at the University of Michigan, and is currently a fellow at the Reynolds Journalism Institute at the University of Missouri School of Journalism.  The concept of a “connector” was popularized in Malcolm Gladwell’s The Tipping Point, where they are described as the people who “link us up with the world,” and “have a special gift for bringing the world together.”  Similarly, Strengths Finder describes “connectedness” as understanding the link between the person and the community, embracing humanity.  The nonprofit he founded, The Initiative for Better Gun Violence Reporting, incorporates his humble leadership and his strength in connectedness.

MacMillan spearheaded the Initiative for Better Gun Violence Reporting (IBGVR) after his co-authored opinion piece with Dr. Jessica Beard entitled, “To understand Philly’s gun violence crisis, in-depth reporting is needed,” was well-received. He felt the initiative was the appropriate next step. He developed the IBGVR with the intention to “inform a new set of best practices for journalists reporting on gun violence and to explore the hypothesis that changing the way this issue is covered could actually prevent shooting incidents and save lives.” Dependent on partnerships, the IBGVR addresses their intention by bringing together community representatives, reporters, trauma specialists, researchers in public health, criminology, and communications, and families of shooting victims to develop best practices for news organizations covering community gun violence. He is hopeful for this initiative, believing it could eventually lead to a center for gun violence reporting on a national level.

Since the launch of the IBGVR, it has been a success. In four months, the IBGVR hosted its most important contribution to date, a summit with panelists from The Trace, WHYY, The Lenfest Institute, Johns Hopkins Center for Gun Policy and Research, Mothers in Charge, The Philadelphia Inquirer, and health professionals from the University of Pennsylvania and Temple University to name a few. In conferences, meetings, or panels, unproductive discourse is common, with little to no action following. The IBGVR Summit, however, was a forum for force multiplication. MacMillan stated:

“One of the women from Mothers In Charge, whose son had been murdered, talked about how she couldn’t find any resources and wondered why news organizations didn’t provide resources at the end of gun violence [stories], like the way we do with articles on suicide or sexual assault and domestic violence.  Within a week, the folks at Billy Penn developed a set of resources and made them available to any partners, and then the folks at Resolve sort of enhanced that product and made it into an interactive website, and then just yesterday on a report about an overnight gun violence, NBC 10 included that resource on that report.”

MacMillan’s connectedness cannot be overstated. In fact, his connectedness is what sets him apart from other organizations combating gun violence. During his closing remarks of the IBGVR Summit, MacMillan asked for a minute of silence to reflect on those who had lost their lives to gun violence. The world of gun violence is emotional, controversial, and loud. Finding peace when surrounded by this rough world may seem difficult. Sharing peace may seem impossible. Jim MacMillan, in his own humble way, demonstrates otherwise.

Linda Fontanilla is a Doctor of Nursing Practice nurse anesthesia student at the University of Pennsylvania. She’s a former Army nurse with one combat deployment. Currently, Linda is service director of the non-profit Action Tank.