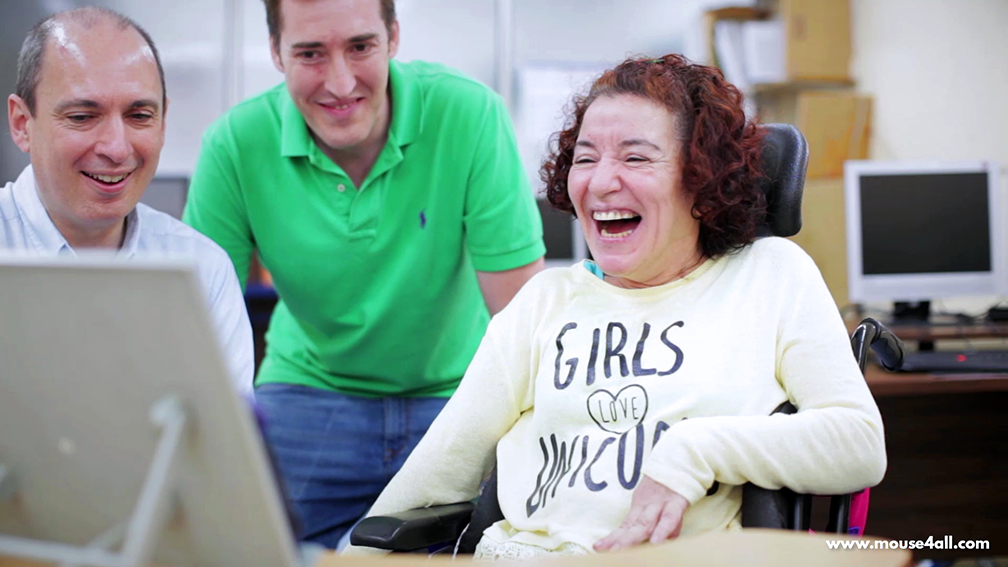 The digital revolution is here but unfortunately not for everyone. The world is becoming mobile; however, we have left behind millions of people who cannot use a touch screen, namely: people with severe physical disabilities resulting from cerebral palsy, spinal cord injury, multiple sclerosis, Amyotrophic Lateral Sclerosis (ALS), or neuromuscular diseases. Mouse4all is an assistive technology which enables everyone to access an Android tablet or smartphone with alternative input interfaces: switches, adapted mouse, trackball, or joystick. This solution makes accessible the entire Android device and all its installed apps, improving the autonomy of persons with severe physical disabilities. We are already experiencing the impact in the users: it improves their privacy, self-esteem, and self-confidence. Mouse4all enables them to make their own decisions and participate in digital society. We have already launched in Spain and our plan is to expand our distribution network internationally to solve a global problem experienced by persons with disabilities worldwide.

Not Everybody Can Touch a Touch Screen

In the last decade, access to information has changed radically. We have replaced keyboards and mice with touch screens. Although desktop computers still coexist with smartphones and tablets, they are used mainly in an office environment. On the other hand, mobile devices are used everywhere anytime, for messaging, accessing information, and consuming multimedia content. Unfortunately, the millions of people with severe physical disabilities that cannot touch a screen are not participating in this revolution. We realized this issue back in April 2015 when we started conducting interviews with the Administration, therapists, associations, and families of persons with disabilities (PWDs).

Accessibility solutions for desktop computers were available for people with motor disabilities. Unfortunately, the mobile world with its omnipresent touch screen interface was lagging. Apple with iOS was an option, but its low market share and high cost made it affordable only for a limited part of our target group. Android offered only a small number of standalone communicator apps. This left out access to the most popular apps like social networks, messaging, and games.

Given this scenario, we took a holistic approach to the issue, instead of making one specific app accessible we decided to make the entire Android device accessible: a person who could not touch the screen should still be able to use every app installed in their device. We started to design a solution that would work in any off-the-shelf Android device.

To sum up our findings at the time:

Mouse4all consists of a smart combination of hardware (connectivity box) and software (Android app). The hardware box allows the connection of the standard alternative input devices that our users require (switches, adapted mouse, trackball, or joystick). The app displays a mouse cursor on the screen. The solution is plug and play: the virtual mouse starts automatically when the box is connected to the Android device and provides a common interface for all the apps.

Two years ago, there was no proper working solution for Android devices. Today, the situation has somewhat improved with accessibility features included in newest versions of the Android OS. Also, some companies are providing alternative interfaces based on head tracking and accelerometers. Mouse4all keeps a strong competitive advantage in terms of functionality and ease of use. Understanding everyone has specific needs we have designed an easy-to-use User Interface (UI) that can be configured according to a user’s capabilities and preferences.

The solution brings autonomy and privacy to its users. They only need assistance from someone to switch on the Android device and physically connect the alternative input device, from that moment, the users can and do work on their own.

We have already verified the benefits that Mouse4all brings to PWDs and their families. We have observed a renewed motivation in end users and a deeper integration with their extended family and social groups, thanks to the access to social networks and communication apps. The fact that Mouse4all users are connected anywhere, anytime is a game changer for them. Now they can certainly decide when, where, and what they use their mobile devices for. It is also important to highlight that many of the users have severe speech impairments so Mouse4all becomes their voice in society.

The impact that Mouse4all makes in the lives of our early adopters can be illustrated with two real examples:

a. We were introduced to a woman with speech impairment who had never used a tablet or smartphone. She could only push an adapted switch with the back of her head. Anyway, during the first training session, within less than one hour, she took a selfie without any external help. All therapists in the room and the user herself burst into tears of emotion.

b. Another of our early adopters was in hospital due to internal surgery. During the recovery period, his Mouse4all prototype physically broke. He promptly called and urged us to go to the hospital to repair the unit. For more than a year, he has been using his Android smartphone mounted on his wheelchair daily. He is always connected through WhatsApp.

Some of the activities that our current users do empowered by Mouse4all include using WhatsApp throughout the day, watching YouTube videos, accessing Facebook, browsing the Internet, reading online news, taking photos, or playing games.

Our business model is based on the sale of the Mouse4all products and services and we have already achieved relevant milestones since the project started in mid-2015. We launched commercially last July and have already closed our first distribution agreement in Spain. Before that, we developed and tested our first product in collaboration with multiple associations and centers of PWDs. Mouse4all has also been included in the Catalogue of Assistive Technologies managed by CEAPAT (Spanish National Center for Personal Autonomy and Assistive Technologies). In 2016, we won the Innovation Award of Vodafone Foundation, a turning point in our journey. Mouse4all SL was funded with the work and savings of its two founders. Until we achieve financial sustainability through product sales, we also rely on the sale of professional services and money received from prizes.

Our plan is to expand the distribution network internationally. We are solving a global problem experienced by persons with disabilities worldwide. Our moral duty is to reach any person who can benefit from Mouse4all and the mobile revolution no matter where they live.

More information is available at mouse4all.com.

Javier Montaner and José Ángel Jiménez are both engineers and cofounders of Mouse4all.SL, working as a team since 2015.

Javier Montaner is Industrial Engineer with an MSc in Computer Science. After more than 15 years of working in technical areas of multinational companies (Alcatel, Gemplus, Vodafone) he has lately collaborated with startups in the areas of IoT and eHealth (Carriots, Bioserenity). He is an active contributor to social entrepreneurship projects such as nlazados (in collaboration with Imserso CEADAC) and EasyCall (Congreso Iberdiscap 2013, Prize Hack for Good 2013).

José Ángel Jiménez is Telecommunication Engineer with concentration in Electronics and Bioengineering. He has an extensive professional experience in management, design, architecture, and development of Information Systems and SW applications. After 12 years of working in Telecom (Airtel, Vodafone, France Telecom), founded in 2011 Anneo Technologies, microenterprise dedicated to development of hardware and software solutions.