For the past three years, the Thomas Scattergood Behavioral Health Foundation has partnered with Drexel University’s School of Public Health (DUSPH) to address pressing behavioral health issues in Philadelphia. Each year, the Scattergood Foundation (TSF) and DUSPH collectively work together to solve current behavioral health issues and to identify future trends in health care. This ongoing project has enjoyed considerable success and acclaim, and has won DUSPH’s Exemplary Community Based Master’s Project award several years running.

The process, or framework, through which the project is led at the Scattergood Foundation is known as design thinking. Design thinking hinges on the 4 Cs—collaboration, creativity, critical thinking and communication—and is the foundation for effectively solving myriad problems. Design thinking is a common practice in product development in the for-profit sector. Large companies such as Apple, Google and General Electric have used design thinking theory and tools. For the nonprofit or service sector, a community-based approach involves collaboration on intervention, ideas or service development. Through the feedback provided by the community, these interventions or services can be applied to specific needs.  The design thinking framework is the springboard for a critical component of the project known as the Design Challenge. The Scattergood Design Challenge is a method used to find multiple solutions to behavioral health issues through competitive and/or collaborative means.

At its core, the Design Challenge is a community-based approach focused on combining new problem-solving techniques, unique or unexpected collaborators and public health theories to 1) inform people about, 2) change people’s practices regarding and 3) help people think differently about mental health issues. Addressing access issues through a design challenge framework allows for the use of the bottom-up approach known as divergent to convergent thinking, which allows consumers to help create choices and participate in the decision-making process. 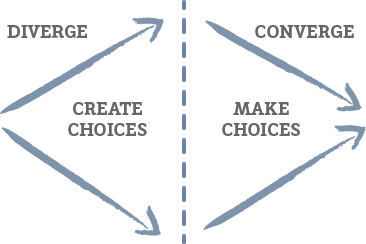 The Scattergood Foundation’s definition of a design challenge is: To pose a question or problem to a group of people and lead the group members through a process of generating and selecting solutions to the question or problem. The 2014 Design Challenge sought to integrate behavioral health care into convenient care clinics (CCCs, also sometimes called retail clinics) located within pharmacies. CCCs such as the CVS MinuteClinic are primarily rooted in physical health care needs and currently lack a behavioral health component. It is estimated that the number of CCCs will double in quantity, nationwide, by 2015 to nearly 3,000 clinics. As CCCs continue to emerge, they are becoming an integral part of the patient-centered model by disseminating information, increasing access and expanding treatment to populations that lack those services. This project aimed to judiciously explore effective avenues to integrating mental health services into CCCs.

The Phases of Design Thinking

The first phase of design thinking is “understand.” From July to August 2013, the project conducted a review of current mental health practices and services. The review demonstrated needs at the local, state and national levels for mental health services that included education, access and treatment services. The review included a literature review of peer-reviewed journals, national storylines and government documents. The research completed during this time led to the development and implementation of an online poll and interviews with several leaders in the health care delivery system in Philadelphia.

There were two topic areas that were further explored because of their potential impact on education, access and services. The two areas were the development of a smart-phone application designed specifically for mental health and implementation of mental health services at CCCs. Thorough review revealed additional pressing topics in mental health, though they were not selected for the 2014
Design Challenge.

To gain insight from the public, the second phase of design thinking is known as “observation” and was conducted through an online poll and key informant interviews. During October 2013, a poll was designed on the Scattergood website to ask the community about the perceived impact mental health services could have through a mobile application or in CCCs. One of the most useful questions asked was: “Which services would an individual use if offered at a CCC?” The top-rated answers of referrals, resources, screening and crisis management were all taken into account in structuring the design challenge question.

Interviews were also a vital component of the observation phase. Key informant interviews were completed with local leaders in health care delivery. The interviews discussed the feasibility of mental health services being adopted in CCCs as well as the benefits and drawbacks to the development of a smartphone application. The responses varied, but several themes were apparent: the need for transparency within health systems, the development of telehealth (particularly in CCCs), an efficient provider referral process and creating an appropriate resource guide. The project extrapolated this qualitative data, similar to the poll, to cultivate the design challenge question. The interviewees’ concerns were also addressed, including the unknowns surrounding reimbursement rates, the effect of the Affordable Care Act, mental health stigma and even the display language for this project in a CCC space.

The third aspect of design thinking is the “define” phase of the question. This stage is the beginning of the design challenge, when Scattergood narrows the topic and asks the community to submit their ideas. This year’s question was: Create an intervention (idea + plan of action) that includes an Education, Access and/or Service component for Behavioral/Mental Health in a Retail Clinic. Any intervention submitted must be able to be implemented by May 14, 2014. **Limitations** cannot include physical space expansion or the hiring of new staff. This year, Scattergood required each submission to address how the intervention would have impact, its readiness for May 14th and its feasibility and sustainability and also to include evaluation metrics.

This year’s Design Challenge was developed with the intention of being displayed at a national scale. However, TSF has always prioritized having a local presence first. This vision allows for expanding mental health education across the United States while influencing policy change concerning access at the state level. However, the Foundation considers increasing access to mental health care in the small neighborhoods of Philadelphia its first priority. Establishing a local presence requires an appropriate and mutually beneficial collaboration between Scattergood and its partner(s).

This year’s local partnership is with a Resources for Human Development subsidiary organization, the Family Practice and Counseling Network (FPCN) and their retail clinic, QCare, which is located in a ShopRite in North Philadelphia. FPCN agreed to implement the winning intervention through the Design Challenge. ChesPenn Health Services of eastern Pennsylvania has also agreed to implement a design challenge intervention. Both implementations are scheduled to begin in May 2014. The Scattergood Foundation is also in communication with CVS about piloting the winning submission in its Philadelphia-area MinuteClinics. Lastly, to help in disseminating and marketing to a wider audience, TSF partnered with Mental Health America and National Register of Health Service Psychologists.

As the design thinking process unfolded to stage four, “ideate”, the design challenge question was narrowed, collaborating organizations were in place and the media strategy developed, this year’s topic gained significant momentum. The Design Challenge officially launched on January 15, 2014. On that date, the Foundation began accepting submissions and began the crowd-fund campaign. By late January 2014, the Design Challenge had garnered attention from national news outlets including PsychCentral, home to over 6 million monthly visitors; Psychiatric News, an academic news outlet; and Bipolar/PTSD Supporters Magazine. The Design Challenge was also shared on social media sites not only in and around Philadelphia but also throughout the country.

In February and March 2014, the Design Challenge began working more closely with local and national partners and utilizing a more complex social media strategy. Through this strategy, the Design Challenge team was able to disseminate press releases, submission requirements and crowd-fund information to a more varied audience. This included those involved in the convenient care clinic business, academic and health professionals and the general public. By March 2, 2014 (the Design Challenge deadline), TSF had solicited nine submissions. Applicants included local Philadelphia-area LCSWs, a career psychiatrist in Illinois, a PhD candidate in Texas and the CEO of PsychCentral. Additionally, the Design Challenge was covered by national leader in Pharmacy News, Drug Store News and leading mental health academic journal Mental Health Weekly. The crowd-fund ended on March 15, 2014, and totaled $4,627, with over 50 funders.

After the Design Challenge submission deadline passed, there was a two-week public commentary and voting period. This year, the Design Challenge applicants received a total of over 600 votes and 430 Facebook Likes. These results were then given to an expert panel of judges for further review that included the CEO of Mental Health America, a health policy professor at DUSPHand a prominent psychologist. The Scattergood Foundation determined the winning intervention.

The anticipated outcome of the Design Challenge was to cultivate ideas and suggestions for developing a mental health service, including community feedback and expert recommendations, in a convenient care clinic setting. The Design Challenge was intended yield a mental health service that would be feasible, replicable and sustainable. The winning intervention would address increasing mental health literacy, reducing stigma and integrating care. This project will also include the elements of social media for community support, awareness and education.

The fifth and sixth stages of design thinking, “prototype” and “test” will begin in April 2014 in collaboration with TSF and FPCN. This year, the winning intervention was Wellness at Your Fingertips submitted by the Philadelphia Department of Behavioral Health and Intellectual Disability Services (DBHIDS) and Screening for Mental Health, Inc. This winning intervention was able to meet, and exceed, criteria expectations and therefore will have the opportunity to be implemented at FPCN, ChesPenn and potentially CVS.

Media as a Tool

TSF has been building its media and new media presence since 2010. This includes a newly formatted and interactive website, a robust Twitter following, a strong Facebook community and newly developed LinkedIn and Instagram accounts. This has allowed the Foundation’s work to be seen across Philadelphia, the Delaware Valley, the United States and the world. Building on these developments, this year’s Design Challenge reached out to behavioral health organizations, potential Design Challenge participants and other members of the community through these means, as well as through traditional press releases to news outlets. This year, the Design Challenge also utilized a crowd-funding campaign website, Indiegogo, to raise funding for the final implementation. Indiegogo is another social media outlet that can raise awareness, raise dollars and raise support for a project, especially those rooted in social issues.

Design thinking and the tool, the Design Challenge, can be extremely effective if used in a strategic manner with willing participants and a dedicated staff. It is critical to understand and observe the issue before defining the question posed to the community, just as it is critical to engage potential collaborators early in the process, to ensure their commitment throughout the design challenge. Additionally, all organizations and individuals who submitted an intervention to the Design Challenge were encouraged to promote their ideas through their own social media accounts. TSF has found that social media can solicit input, increase reach (through “shares” and “retweets”) and be a tool for change if used consistently. Also, for those engaging in a crowd-fund campaign, it is imperative to have a finished product or service before launching, to ensure that the global community understands where their donation is going. TSF believes that design thinking and the Design Challenge can be effective ways to address behavioral health concerns in communities across the United States and is also steadfast in the belief that behavioral health integration is critical to the evolving health care structure in the United States; convenient care clinics are just the beginning.

Issue 18 | What Works and What Doesn't