President Obama’s fight against deep and persistent poverty created the Promise Zone Initiative in January 2014. The initiative was built on the Neighborhood Revitalization Initiative (NRI) as part of the President’s Ladders of Opportunity agenda, which allows the federal government to work with local communities and brings federal investment and attention to needed areas. The five key activities in these areas are: create jobs, increase economic activity, improve education opportunities, reduce violent crime and leverage private capital. The first five zones are in San Antonio, Los Angeles, southeastern Kentucky, the Choctaw Nation of Oklahoma and Philadelphia.

Philadelphia has the worst poverty rate of the 10 largest U.S. cities. Twenty-eight percent of the population (430,000–440,000 people) live below the federal poverty level, and about 1,500 Philadelphian families become homeless every year. Children are the most frequent users of emergency shelters, outnumbering adults almost two to one. The greatest concentrations of poverty can be found in North and West Philadelphia; West Philadelphia has 35,315 residents and a poverty rate of 50.78%, nearly double the city’s overall rate.

Philadelphia also has a rich and invaluable history, with talented and skilled citizens, dedicated community leaders and passionate organizations that are committed to service. There’s a reason Philadelphia is known as the City of Brotherly Love, and the Philadelphia Mayor’s Office of Community Empowerment and Opportunity (CEO) shows tangible proof by bringing City of Philadelphia citizens together against poverty.

In January 2014, West Philadelphia received a 10-year Promise Zone designation through the efforts of over 100 stakeholders (from public agencies and nonprofit organizations to institutions and the business sector) led by CEO.

The Mayor’s Office of Community Empowerment and Opportunity is led by Eva Gladstein, the Executive Director. She, together with Mary Horstmann (Chief of Staff) and the CEO office, held a meeting with the interested Mantua community and other groups, such as Drexel University, that had current projects to plan to apply for the Promise Zone designation. In three weeks, numerous goals and an organizational framework were created, leading to the success of receiving the designation in January 2014.

“By working with committed partners, planning with the community and by keeping the community’s voice front and center” – Mary Horstmann, CEO Chief of Staff

Having applied the philosophy of collective impact to Promise Zone Philadelphia, CEO was able to create an organizational structure that encourages stakeholders’ flexibility to communicate, collaborate and maximize their ability to participate in the initiative. It also allows actions to build upon previous successes. Promise Zone Philadelphia’s organizational structure is led by the mayor, under whom is the executive committee, composed of CEO itself and each committee’s implementation partners. The executive committee works with the Resident Engagement group, which comprises Mt. Vernon Manor and the People’s Emergency Center CDC. Under the executive committee are six subcommittees: education, public safety, housing, economic opportunity and health and wellness. Each committee has two to three implementation partners and eight or more supporting partners. Subcommittees are also formed based on the needs of the community even if this was not originally part of the five Promise Zone key activities. 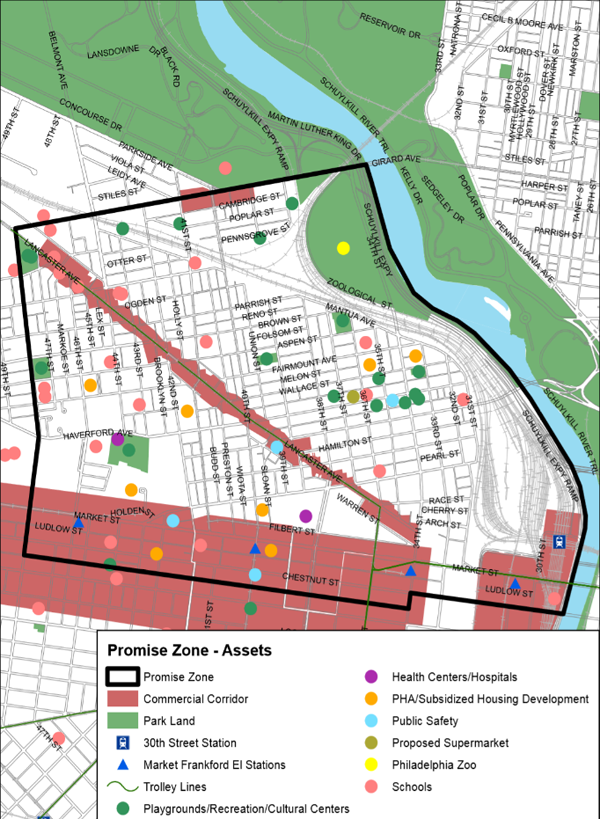 The collective impact philosophy of the Shared Prosperity Philadelphia action plan enables CEO to organize and implement a coordinated approach that can be acted upon timely and extended beyond the administration. It includes a system of assessing and measuring poverty that can be shared and continuously communicated among all of the different stakeholders. Because of this, numerous stakeholders are able to apply their own theories of change towards antipoverty initiatives, and CEO can focus on connecting and holding different stakeholders together in order to maximize the impact of every federal, state and philanthropic activity.

In just the one year since Promise Zone Philadelphia received its designation in January 2014,

CEO intends to weaken the presence of poverty and replace the negative effects with their vision of “a diverse, prosperous, and vibrant Philadelphia where all citizens are treated with dignity and respect—a city where the impacts of poverty are acknowledged and action is taken to support those most in need” by keeping partners together and energized to continuously make a positive change, by maximizing the support of the AmeriCorps VISTA volunteers, by knowing the right tools, by having clear measurements and a clear agenda and by having different aligned activities.

Philadelphian synergy shows what it means to be people for people. Soon, the future of residents in West Philadelphia will not be negatively determined by their neighborhood. With CEO as a backbone strongly holding all of the different stakeholders together, I believe that the cycle of poverty can be broken and that we can gain a truly shared prosperity not only in our community and in our city but in our country as well.

So can a deep and persistent cycle of poverty in West Philadelphia be broken?

And not only can you watch it come true, but you also can, and must be, a part of it.

Finding the Heart of an AmeriCorps VISTA Volunteer in the Data

Dan enjoys making and reading graphs and finding and understanding data and trends. Also, one of his motivations to come to work is seeing the different ranges of perspectives and activities that the initiative brings to the table each day. For the past five or six months since he began working with CEO, Dan has been collecting basic data in the community. His next step will be creating multiple data dashboards for each committee.

Dan hopes to help bring real positive changes to the Philadelphia Promise Zone community by helping set a strong foundation for how the area’s progress is tracked that also sets a framework for incorporating future goals.

Executive Order No. 6-13: The Mayor’s Office of Community Empowerment and Opportunity retrieved from www.phila.gov/Newsletters/PhilaPromiseZoneDoc3.pdf

Michaela Boren is from the Philippines. She is currently earning her master’s degree in environmental studies at the University of Pennsylvania, concentrating on environmental education and advocacy.