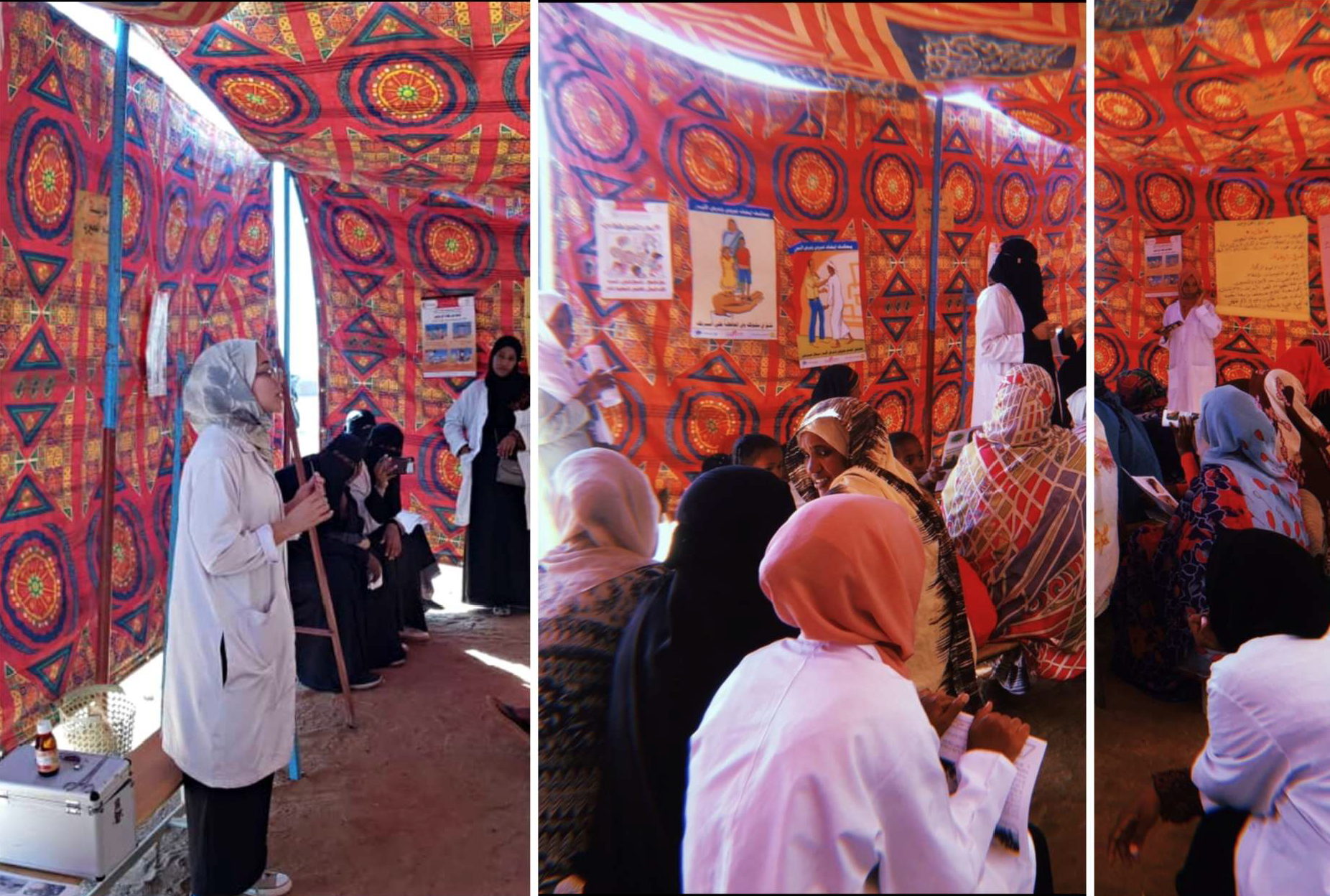 The maternal health situation in Sudan is quite challenging, yet it is considered to be moderately good. For a variety of reasons, the health of Sudanese women and young girls in underserved communities is heavily compromised. Based on these experiences, we came to understand the need for health education and awareness campaigns in the Sudanese rural areas.

We came up with the idea of establishing maternal health promotion and educational campaign in a far small village. The purpose of this initiative was to assess the degree of awareness about reproductive health, raise community empowerment and social accountability, help offer this population health care welfare, promote international maternal health standards, and provide guidance and support health systems for making motherhood safer.

This project was created and developed over the course of Interdisciplinary Field Training, Research, and Rural Development Program (IFTRRDP) assigned by the University of Gezira, Faculty of Medicine, Sudan.

The health of women and children has been clearly addressed by Sustainable Development Goals (SDGs) and hence, the academic and health institution as priority areas. Education activities that start during the antenatal period and continue postpartum appeared to be more effective than methods which focus on education during pregnancy only.

The maternal health situation in Sudan is critical and it’s considered moderately good while still progressing. Due to a variety of reasons, the health of Sudanese women and young girls in underserved communities, such as rural areas and villages in particular, has been heavily compromised. Some of these reasons include

cultural/social beliefs, lack of accessibility, financial instability, neglect, and ignorance, all of which undermine their access to health care resources. However, we came to understand the need for health education and health awareness campaigns in the villages.

We address important issues concerning health education during pregnancy, which is important to improve the outcomes for maternal and children health. For many women and girls gender discrimination systematically undermines their access to health care, reasons for this include fewer financial resources and constraints on mobility. This is compounded by additional burdens imposed by gender disparities which limit their ability to stay healthy.

We came up with the idea of presenting a small maternal health promotion and educational campaign in a small village population. The purpose of this idea was to assess the degree of awareness about health issues mainly reproductive health, to raise community empowerment and social accountability, offer help to this population in the form of health care welfare, promote international maternal health standards, and provide guidance and support health systems to make motherhood safer as a top priority.

The idea was created and developed throughout a two phased Interdisciplinary Field Training, Research, and Rural Development Program (IFTRRDP) course. The project was designed, and institutional approval was obtained, then the data collection process was completed in the first phase.

The location of the University of Gezira, Faculty of Medicine is in the central rural areas of Sudan and provided an excellent opportunity for rural development. During the course of IFTRRDP my colleagues and I were assigned to  spend one week every two years in the named “Al-Keibair” 90 kilometers away from Wad Medani City, the capital of Gezira State in Sudan, a very small village with few, yet very kind villagers.

Data was collected through a questionnaire developed by the University of Gezira. We surveyed 100 families randomly chosen out of the total number of approximately 228 villages, using direct interviews like small talks with the women of each household to assess and evaluate their knowledge about reproductive health issues, such as maternal health, contraception, and family planning, et al.  In addition to the various maternal health issues including: the antenatal, pre and postnatal care for women, female genital mutilation, vaccination

We collected the data as a preliminary step before intervening (and prior to the promotional sessions). Later throughout the week we created a "Health Education Day" which is an open platform to talk and address our topics. Most of the women were cooperative, attentive, and willing to accept new information. They started asking questions about habits that they used to have, and they received the right answers which turned the talk into an interactive session that was beneficial to all participants.

Due to the low socioeconomic status and poverty levels of the women, very few had access to social media platforms, television, and mass media. The main approach we used at the “Health Education Day” was a verbal method (talking, interaction) and visual methods such as written posters, demonstrative posters with educational messages, and pictures about the main points that we obtained from the public health/health education department from the Ministry of Health-Gezira State. We hung visuals all over the school yard so that everyone who can read will have access to them. We also used small handouts that we distributed to all attendees and presented in an easily understood format.

We overcame the availability of low resources by looking to alternative tools like direct health education sessions. We mobilized the community to make contributions from villagers themselves to non-governmental organizations, governmental institutions, and charities, all coming together to help. Unfortunately, neither a health facility nor a health care provider in the village was available, and in general situations the well-trained midwife was used to take care of all minor emergencies. She did have a first aid kit in addition to her essential case of surgical instruments that were used for delivering babies, but all major emergencies or even slight illnesses like the flu, required travel of at least 30 minutes by car to reach the nearest village with a health care facility. And on rainy days this wasn’t an option because travel is limited due to the muddy road conditions. This led to us establishing a small health care center that we began building in November of 2018. The health care center was fully equipped with an attending health care provider offered by the Gezira Ministry of Health after we informed them of the need. Also, village community leaders were involved in the design and implementation of the project, this put community leaders in a position to be of help in the continuation of this project.

Our main goal was to provide optimum health care along with essential education and promotional health programs to raise awareness and increase social empowerment. Hopefully, this shores up the ongoing sustainability of our project.

The evidence impact of the project was very obvious during the second phase, and the amount of progress people were able to achieve was clearly noticed through their behavioral habits in addition to the data which we were able to collect. We used additional discussions and the same questionnaire again for data collection.

The results of the second phase showed the following:

82% of pregnant women had their doubled-dose tetanus vaccine shots.

56% had only one dose of their tetanus vaccine shots compared with 44% in the first phase of the study.

52% were on folic acid supplements during pregnancy in the first phase, compared to 59% in the second phase.

According to birth control and children spacing: 71% of the women never used contraceptive methods, and 54% did not know about them which lead to 78% becoming pregnant. This percentage dropped to 44% in the second phase of the study.

We found that 67% of pregnant women never had any health education, and 20% of women received health education from the village's midwife. We organized a TOT (training of trainers) approach, by educating two midwives to help to sustain the project. Health education was taught by a doctor for 73% of women, but they faced a lot of difficulties due to the unavailability of a nearby primary health care center with a committed medical practitioner. In addition to transportation being difficult, especially at night and during rainy seasons. The idea of this project has been shared with junior students in the faculty through public lectures and social media. It was helped to enlighten them about the importance of the issues that we noticed and inform the students about what they might undergo experience while observing and studying.

The novel approach was presented over the long term, with posts shared all over social media websites to raise the awareness of the campaign. Also, regarding the women’s day celebration festivities in Wad-Medani City, there was a small TED talk (by the author) for all of the attending females there about the campaign and what was experienced through work in the village, while introducing them to the same topics covered there. Furthermore, they were educated about their role in developing a socially accountable society, and what they can do to make real change in spite of limited resources to spread the message to every woman.

In conclusion, this project happened because we addressed a true community health need, since safe motherhood is an incredibly important issue. The focus being to highlight the need of underserved populations --  women and rural areas.

A concerning factor of this project lies specifically in the financial support that might be an obstacle to the completing the building of the health care facility, and of course the social/cultural norms that they may revert to. Also, there is the challenge that there is not availability to revisit the village any time soon to evaluate the final impacts due to many reasons (Sudan political issues throughout the last year and now the coronavirus

(COVID-19) situation). Other risks that will affect such projects in general is financial accessibility, real or perceived discrimination, lack of information and embarrassment, neglect, and ignorance. This is not only a concern of medical students and the medical field personnel but rather a community issue. Everyone is accountable for the health of the community and big actions must be taken to bring about the needed change.