Estimations are that in Ghana, 21% of young girls are mothers by the time they are 18 years old. Unplanned pregnancies among young girls occur mainly due to lack of knowledge about sexuality issues and inappropriate use or non-use of contraceptives. The aim of the study was to determine what influences the choice and use of contraceptives by teenagers in Sunyani west district. The study design was exploratory, descriptive and quantitative. Simple random sampling was used to select respondents from the lists of pregnant teenagers and those having a baby or babies provided by professional nurses in specific health care centers selected for the study. Data was collected by means of a structured questionnaire during respondents’ normal routine visit to the designated health care centers.

Pregnancies and childbirth among teenagers are historically common in Ghana. At this age all girls are expected to be pursuing their studies or learning a vocation. However due to a complexity of reasons; economic, social, cultural and religious, many girls from 13 to 19 years find themselves starting motherhood unprepared (Ghana Health Service, 2005:138; Ringheim & Gribble, 2010:17). For many young mothers, however, pregnancy and parenthood mean an early conclusion to their education with consequently reduced career opportunities, increased likelihood that they will find themselves socially excluded and living in poverty (Fraser, Copper, Nolte, 2006:72; Oyadele, Wright and Maja, 2013:95).

Teenage pregnancies are generally associated with higher rates of maternal morbidity and mortality and greater risks for clandestine abortions, delivery complications and low birth weight of infants (Ehlers, 2010:15; Oyadele et al., 2013: 97). Furthermore Wekwete (2010:170 mention that teenage girls are vulnerable to sexually transmitted diseases including HIV/AIDS because they are mostly unable to negotiate safe sex. By using contraception effectively, teenage girls would be improving the quality of their own lives and the lives of their children. They will also be reducing the risks associated with pregnancies at such young ages and ensuring that childbirth is commensurate with their family income, autonomy, thereby improving the quality of their own lives and of their children (Durojaye, 2011:1-29; Zungu & Manyisa, 2009). Yeatman and Trinitapoli (2008:1854) argue that, despite a wealth of research describing prevalence of and patterns in the use of modern contraceptive methods in high fertility settings such as sub Saharan Africa, the role of a host of socio cultural factors in facilitating or impeding the effective use of contraception remains only partially understood.

STATEMENT OF THE RESEARCH PROBLEM

Globally, unintended and unplanned pregnancies are highest in Africa. In Ghana, nearly 60% of teenage girls report that their recent birth was unintended (Ringheim & Gribble 2010:19). This occurs because they are not fully matured psychologically, are less prepared and not economically independent. In most cases teenage girls bear the consequence of unplanned pregnancy.

Blanc, Tsui, Croft and Trevitt (2009:68) note that teenage contraceptive use is characterized by shorter periods of consistent use with more contraceptive failure and more stopping for other reasons. Lack of contraception or contraceptive failure by sexually active teenagers pose serious threats to individuals, families and communities. Individual lives and families can be damaged as girls experience frequent, difficult and complicated pregnancies. Teenage motherhood has several disadvantages both to mother and the child and if left unattended, the children to teenage mothers would themselves become teenage mothers thus perpetuating a vicious cycle (Ghana Health Service National Adolescent Health and Development Programme, 2005:138). Though the knowledge of the availability of contraceptives seems high in Ghana, there is a wide gap between knowledge and practice which must be explored.

PURPOSE OF THE STUDY

The aim of the study was to determine the influence on choice and use of contraception by teenage girls in Sunyani west.

OBJECTIVES OF THE STUDY

The objectives of the study were to:

The research design was exploratory, descriptive and quantitative. Polit and Beck (2008:20-21) explain that exploratory studies are useful if the researcher wishes to assess and understand a phenomenon in a new light, ask questions and search for new insights, as was the case in this study. Descriptive study designs aim at gaining more information about characteristics within a particular field of study (Burns & Grove, 2005:232).

The study was conducted at two health care centers; a public and private health centers in the Sunyani West district, Odomase township, Ghana. The population of the country recorded 24,658,823 with a significant proportion of 38.3% below the age of 15 (Ghana Statistical service, 2013). Health care is the responsibility of the Ghana Health Service (GHS) which is one of the four bodies under the Ministry of Health. Each region has a regional referral hospital under the regional health directorate. There are three independent teaching hospitals which offer specialized services on referrals only.

Teenage girls meeting the selection criteria for the study were invited to participate during their visit to the specific health care centers in Sunyani west district until the required number of 80 (40 respondents from each health care center) was reached. Data was collected by means of a structured questionnaire designed and approved for this research. Each section addressed a specific area that was deemed necessary to understanding the choice and use of contraception among teenage girls. Data was collected during respondents’ normal routine visit to the designated health care centers.

A Statistical Programme for Social Sciences (SPSS) version 16 was used for analysing data. Descriptive statistics such as frequency distribution, and measures of central tendency allowed the data to be organized in ways that gave meaning. Inferential statistics were used in making judgments about the population based on the evidence from the study sample (Burns & Grove, 2005:452).

Validity includes truth, strength and value of any findings or conclusions drawn from the data (Grove, Burns & Gray 2013:393). Face and content validity were deemed more applicable for this paper.

Reliability was achieved by conducting a pilot study which produced the same results when repeated for the main research.

Permission to conduct the research was obtained from the Research Ethics committee of Health Studies, UNISA and authorities of two health care centers in the Sunyani West district.  Ethical standards adhered to throughout the research included; protecting the human rights of respondents, balancing benefits and risks in the study, obtaining informed consent and submitting a research proposal for institutional review (Burns & Grove, 2005:176).

Most respondents, 82.52% (n=65) had knowledge about contraceptives whilst 19.48% (n=12) lacked contraceptive information. This result tallies with Ghana Demographic and Health Survey (GDHS) (2008), stating that knowledge of contraceptive methods is very high among girls, 93.4% for girls aged 15 to 19 years and 97.9% for all women.

Source of information about contraception

School teachers ranked high, 31.16% (n=24) as the main source of information about contraception, then health workers, 27.27% (n=21) and friends represented 18.18% (n=14). A further 10.39 %( n=8) respondents, were informed about contraception by their family members whilst 12.99% (n=10) got information from the media. In contrast, De Freitas (2007:122) found that the main source of information about contraceptives for adolescents attending the Asa Branca health center in Luanda, Angola was the nurse (28%). Radio and television had 19% and 17% respectively whilst the school contributed 11%. Hagan (2012:125) in a study of 244 students with knowledge of contraception in selected senior high schools in Central Region of Ghana found that 60% of respondents obtained knowledge about contraception from the media (television/radio) and 30% were informed by peers.

Figure 1: Source of information about contraception

Influence on choice of contraceptive method

Partner influence was reported as significant in the choice of contraception by respondents, 36.62 % (n=26) and 22.54% (n=16) indicated that it was because the chosen contraceptive had no side effects. Furthermore, 21.13% (n=15) decided to use a specific method because it was easy to use, 12.68 % (n=9) easily available and 2.82% (n=2) felt it was affordable. In contrast, De Freitas (2007:143) report that 43% of adolescent respondents in her study claimed they themselves decided on using contraceptives whilst partners, 26% decided on contraceptives, 21% were influenced by their family and 5% by community or religious leaders. 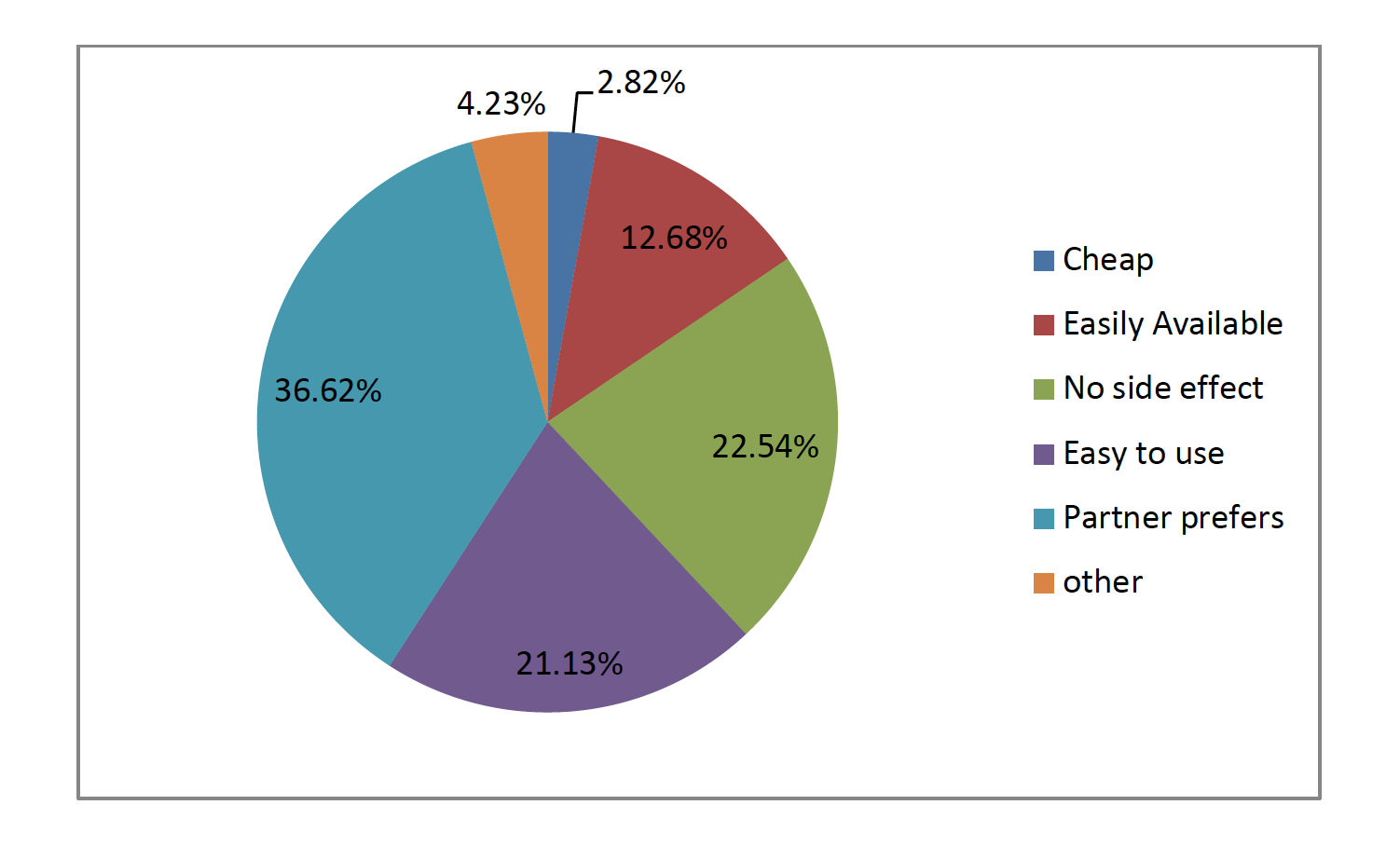 Reasons for discontinuing contraceptive use

Of the respondents, 35.62% (n=26) had stopped using contraceptives due to side effects, 32.88% (n=24) partner dislike of the contraceptive method and the cost compelled 9.59% (n=7) to stop and the same percentage discontinued use due to unavailability. Similarly, Osaikhuwuomwan and Osemwenkha (2013:58-62) found that 68.7% of respondents felt embarrassed or ashamed to use or purchase condom/contraceptives and 50.3% noted it was because male partners disliked condoms.

Side effects of using contraceptives

As many as 55.71% (n= 39) had experienced no side effect whilst 17.14% reported to have spotting after the use of these contraceptives, 10% (n=7) experienced headaches, 7.14 % (n=5) had gained weight, (4.39%, n=3) felt nauseas and 5.17% (n=4) had amenorrhea. In their paper titled “Intrauterine Contraception in Adolescents and Young Women: A descriptive study of use, side effects and compliance”, Lara-Torre, Spotswood, Correia and Weiss (2011:39-41) state that 9% of respondents complained of pelvic inflammation disease, 28% of pain, 9% that partner felt strings and 32% complained of bleeding. In contrast, most respondents from this study experienced no side effects. This could be attributed to the fact that the respondents in this study mostly used condoms whereas Lara-Torre et al (2011: 39) specifically examined respondents using IUDs.

Figure 4: Side effects of using contraceptives 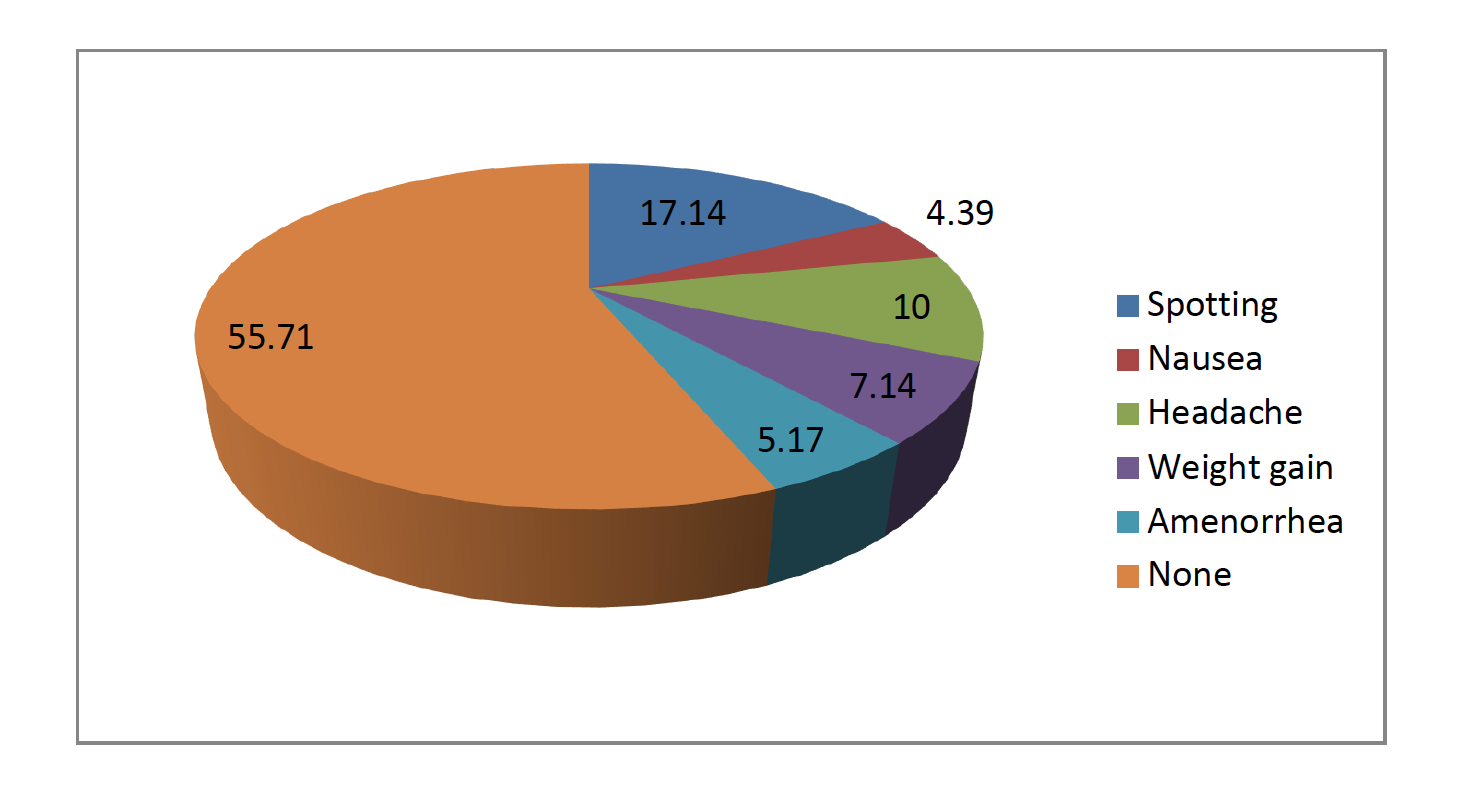 Based on the results of the study, the following recommendations are made:

The district health directorate should target young male counterparts of teenage girls with information, education and communication highlighting the advantages of contraceptives used by females like the female condom, the combined oral contraceptive pill and injectables.

Collaboration between the two agencies would increase the capacity of teachers not just to inform the students about sex and contraceptives but to encourage utitlization of contraceptives, inform on side effects of all the choices and encourage abstinence or safe sex among the teenage girls.

Adolescent health and reproductive services must be resourced to reach out to more young people; training peer educators, making available contraceptive commodities and providing friendly, stigma free services for the uptake of these services by teenage girls.

LIMITATIONS OF THE STUDY

Generalization of the study’s results might be limited since the study was done in one district- Sunyani West district due to the small sample size. Since contraception involves sexual behavior, some respondents might have felt embarrassed to answer sensitive questions.

To all the young women who participated in this study, thank you.

Durojaye, E. (2011).  Access to contraception for adolescents in Africa: a human rights challenge in Comparative and International Law Journal of Southern Africa, 44 (1):1-29.

Hagan, J. E. (2012) Contraceptive Knowledge, Perceptions and Use among Adolescents in Selected Senior High Schools in the Central Region of Ghana. Journal of Sociological Research, 3(2).

Lara-Torre E, Spotswood L, Correia N & Weiss PM. (2011). Intrauterine Contraception in Adolescents and Young Women: A Descriptive Study of Use, Side Effects and Compliance. Journal of Pediatric and Adolescent Gynecology, 24(1):39-41.

Wekwete NN. (2010). Adolescent pregnancy challenges in the era of HIV/AIDS: A case study of a selected rural area in Zimbabwe. Addis Ababa. Organization for Social Science research in Eastern and Southern Africa.