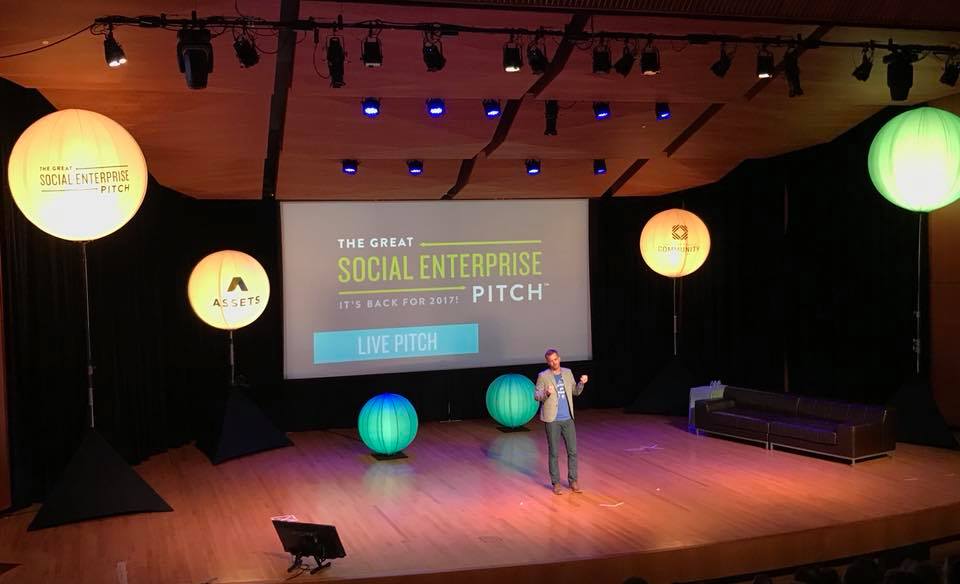 Caption: Jonathan Coleman speaks in front of a sold out crowd of more than 350 attendees at the Great Social Enterprise Pitch in Lancaster, Pennsylvania.
Photo Credit: ASSETS

Technological innovation has a long history of being centered in large metropolitan areas. Abundant funding sources, top-notch universities churning out a talented workforce, a culture of high-risk/high-reward initiatives, and an entrepreneurial energy that is unique to a bustling, urban environment are just a few of the reasons that these ecosystems develop and thrive.

For these same reasons, social innovation has traditionally followed a similar course. Within these urban hubs of technological and the social innovation, a self-feeding ecosystem forms, with one success built off the back of another. The successful entrepreneur becomes the next prominent angel investor while in the same way, the successful social enterprise encourages a new generation of impact-minded entrepreneurs. Unfortunately, this means that both technological and social innovation have been slow to catch on and grow in smaller cities and rural environments.

Steve Case, prominent investor, philanthropist, and founder of AOL, has recently been focusing his energies on ways to combat this phenomenon through a concept he calls, “Rise of the Rest.” His hypothesis is that the next wave of technological innovation will come from smaller cities in the interior of the country which have not had access to the resources found in the prominent innovation hubs, like San Francisco, New York, or Boston.

This movement is exciting, but it should not stop with technology. Just as Rise of the Rest seeks to encourage technological innovation in Middle America, so too should social innovation be fostered outside of large urban environments. If it is not, large swaths of the country will continue to be left behind and the resulting economic carnage will further drive the cultural and economic divide between urban and rural America.

Lancaster, Pennsylvania, a small city of 60,000 people, within a metropolitan area of 500,000, is a perfect example of why this is important. Located approximately 80 miles outside of downtown Philadelphia, or 40 miles from its outer suburbs, the city has a poverty rate that hovers around 30 percent, which is significantly higher than its larger neighbor. Other similarly-sized cities in the mid-state have even more dire economic hardships. How then do we encourage social innovation that addresses these issues in small urban environments?

This is a question that ASSETS, the organization I help to lead, has been trying to answer. Over the past several years, ASSETS has made hypotheses about what this might look like and has been laying the groundwork for the creation of an impact business ecosystem. And it appears that those hypotheses are proving correct as we are beginning to see a local impact-focused ecosystem take shape. Here is how we did it:

1.) Educate Through Action, and Make It Sexy.

In Lancaster, the term “social enterprise” was virtually unknown four years ago. Outside of a small group of nonprofits seeking to generate earned income for their missions, the term did not resonate with the general population in any way. In order to help remedy this, we partnered with the Lancaster County Community Foundation to create a very public social enterprise incubator and pitch competition, called The Great Social Enterprise Pitch. The goal of this initiative was as much about educating the public as it was about launching new social enterprises. Four years later, we annually sell out a 350-person venue, along with livestreaming of the event through several media channels, and most importantly, we can say the words “social enterprise” without having to include the requisite definitions and explanations. We could have run around for years talking up the tenets of social entrepreneurship and would not have the impact or influence of one night with tangible examples that the public is energized to learn more about. This is the first step!

Small-city funders are not always known to be the most innovative. However, if one or two local foundations are willing to step out of their comfort zone, many more doors will open. Lancaster is lucky enough to have a forward-thinking community foundation that recognized the limits of philanthropy and began to include social enterprise, not only into their vernacular, but also into their grantmaking, dedicating funding and support to nonprofit social enterprises. However, they soon realized that in order to see large-scale impact, the for-profit sector needed to be allowed to participate as well. This led them to partner with ASSETS in launching the Great Social Enterprise Pitch, bringing attention and financial resources that were previously unavailable to for-profit impact-focused entities. The success of this initiative has opened the door for other foundations to both better understand and participate in the funding of social enterprises.

3.) Ensure that ALL demographic groups are provided opportunities.

In many communities, there is a wealth of energy and resources devoted to supporting entrepreneurial opportunity for low-income or historically under-represented people groups. However, the worlds of social innovation and “business for good” often live in the upper classes, with little education or resources available for socially impactful business innovation available to under-represented groups. At ASSETS, we have imbedded social impact into our traditional micro-enterprise training, consulting, and financing functions so that solutions can more naturally rise-up from within the communities being “helped.” The last two winners of our social enterprise competition have been a Somali refugee providing economic opportunity to the refugee community in Lancaster, and two young African American women producing all-natural beauty products.

4.) Convince the traditional businesses to join the party

Social Innovation need not live in start-up enterprises alone. In fact, in order to see significant impact in a local economy, larger businesses must be invited to participate. At Assets, we have found a unique entry point into this world through the faith community. Many big business owners in Lancaster and other small communities in the U.S. desire to make the world a better place through a faith lens. Unfortunately, that lens does not always carry over to traditional ways of doing business.

However, helping to make the case that business itself can be an avenue of moral living can be done in a number of ways. One key to curate this connection has been to provide a tool and framework to help businesses understand, measure, and improve social and environmental metrics. We have partnered with B Lab, the creators of the B Corporation Certification to provide resources for this to happen. Our goal is two-fold: we hope to grow a community of B Corporations in order to shine a light on the brightest performers from the business world, and to set a public standard for best-practices amongst businesses. Additionally, we seek to see a majority of local businesses using the B Impact Assessment as a way to measure and improve upon their social and environmental impact. The old adage of “you can’t manage what you do not measure” holds very true regarding social innovation and impact, and bringing in a world-class tool to our community has allowed that to happen.

The final piece of the puzzle in building out a social innovation ecosystem is to have a robust local impact investing movement. Local CDFIs need to be more innovative with their financing options, acting more like impact investors and less like banks. Foundations need to begin implementing strategies to invest their endowment into the local economy and impact business opportunities that enhance their grantmaking. Finally, local investors, who are already few and far between in a small community, should be encouraged to consider more than just the financial returns on their investments. They must also have vehicles to invest locally

Creating social innovation outside of traditional hubs is not an easy task and although we are excited by the movement in that direction in Lancaster, we have not yet reached the finish line. Getting there will take continued work, creativity, and intense collaboration between the local business support services, philanthropic funders, investors, entrepreneurs, and CEOs.

Jonathan Coleman is the Co-Executive Director of ASSETS, a Central Pennsylvania-based organization whose focus is to help create equitable and ethical local economies where all citizens prosper. ASSETS is a national leader in integrating social enterprise and impact-focused business practices into the microenterprise development and community development finance industries.

In his four years at ASSETS, Jonathan has overseen the launch of several successful social enterprise-focused initiatives, including The Great Social Enterprise Pitch -- a social enterprise incubator and pitch competition, an Impact Loan Fund, and the Measure What Matters program, in partnership with B Lab (the non-profit behind the B Corporation Certification). Jonathan has also been chosen by the World Economic Forum as a Global Shaper, FIELD at the Aspen Institute as an ELM² Fellow, and received the 2016 Innovator Award from the Lancaster Chamber of Commerce. He holds an MBA in Economic Development and is fluent in Spanish.