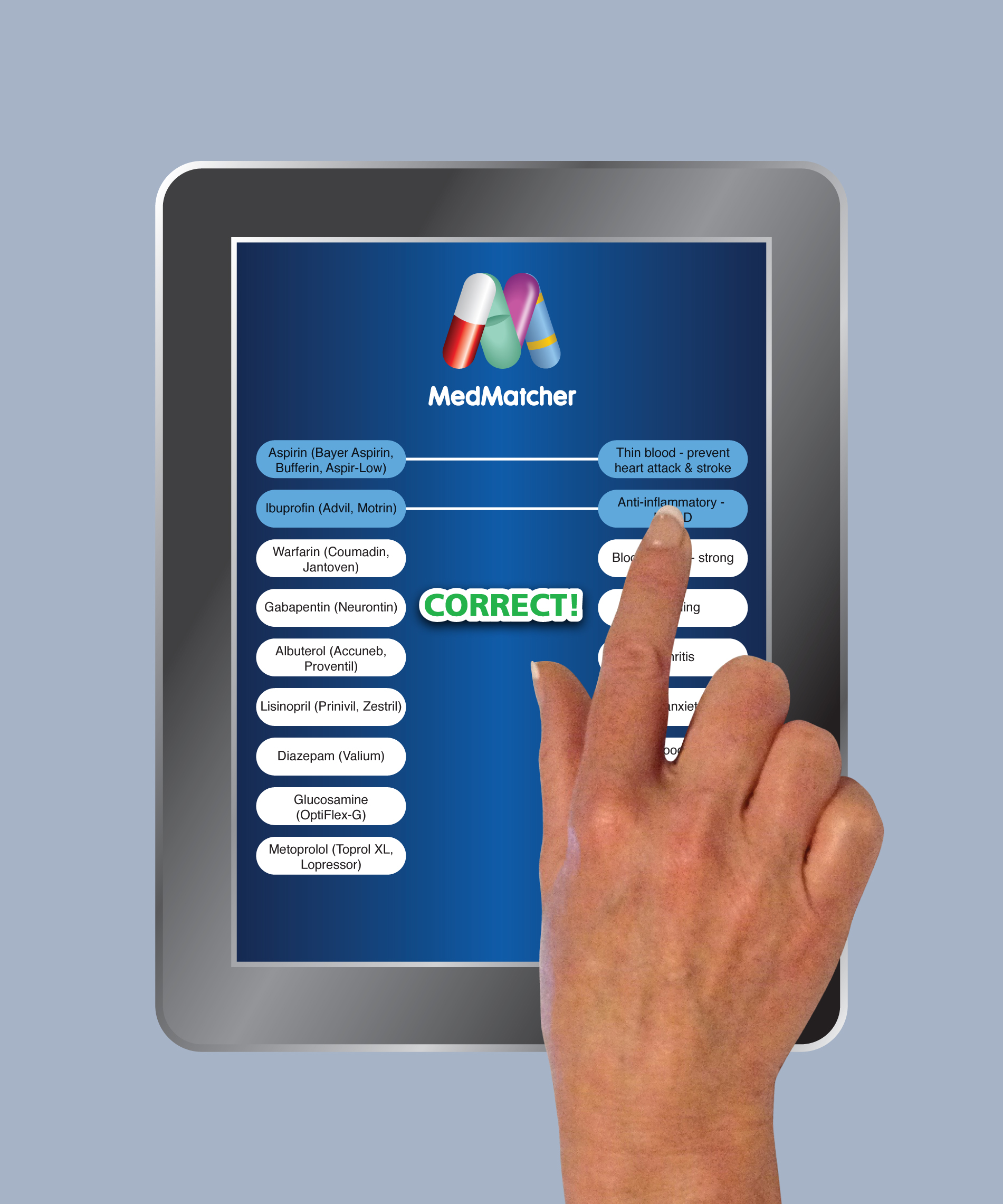 MedMatcher is a mobile game designed to help educate patients about the medications they have been prescribed and the reasons for taking those medications. Through a simple interface, the matching game can be played as many times as desired by both patients and family members. Preliminary trials have indicated that MedMatcher is an ideal adjunct to existing medication education, and has the potential to significantly increase medication understanding.

Medication understanding and adherence has become a leading issue throughout all fields of healthcare. It has been established that as high as 70 percent of elderly patients do not understand their medications.1 This issue is further complicated by the sheer number medications many people are prescribed. According to a nationwide study, 60 percent of adults 65 years and older take a minimum of five medications; 15 percent of such patients take ten or more.2

At a 580-bed community teaching hospital, 40-50 percent of discharged patients reported being unable to describe the reasons for their medications. An innovative concept was suggested and pursued to create a simple mobile game which could reinforce medication education at discharge for both patients and families or caregivers. Numerous mobile apps have been demonstrated to improve adherence and understanding of medications for patients.3

A nurse, a doctor, and an application developer collaborated to create a simple matching game for the iPad. A small grant was obtained to complete the application, MedMatcher, and to purchase seven iPads and cases. MedMatcher was designed to include the 200 most common discharging medications at the trial hospital. Nursing standard work was developed to incorporate use of the game without adding any extra time or work to established nursing care.

A 27-bed medical telemetry floor was chosen as a trial area for MedMatcher. As part of regular education about medications during discharge, a nurse or nursing assistant would select the patient’s medications within MedMatcher and explain how to play the game. The patient and/or family members could then simply play a matching game between the names of the medications and the reasons for prescription. If the patient chose the wrong answer, a “try again” message encouraged the patient to select a different answer. An instantaneous “correct” appeared when the patient chose the appropriate answer. Once completed, there was an opportunity for the patient to rate the helpfulness of the game and play it again.

The iPads were usually with the patient and family for three hours and then were collected, cleaned, and given to the next patient. Statistics were maintained for how often the game was played, percentage of correct answers compared to first and future plays, and whether users found the game helpful for understanding medications. After a three-month trial, patients overwhelmingly reported that they found MedMatcher easy to use, fun to play, and beneficial for understanding their medication names and purposes. Furthermore, the trial area experienced a 20 percent increase in patient experience scores related to medication understanding and medication education effectiveness.

MedMatcher is a truly unique solution to medication education. Rather than utilizing mere auditory cues and overwhelming printed information which is typically ignored, MedMatcher adds both visual and tactile learning within the familiar framework of a game. The game also adds the benefits of self-controlled pace and immediate repetition to allow end users to learn at their own pace and frequency. In addition, the game can be easily played not only by the patient, but also by the patient’s family members or other caregivers to expand the education to include all parties involved in the health and well-being of the patient.

Based on early successes, MedMatcher is planned to be used in further testing to establish its effectiveness as an educational tool. Feedback from patients led to adding popular trade names to the generic medication names, and also the development of a second matching game for common side effects with a simple interface to easily switch between the two matching games.

MedMatcher use extends far beyond the hospital setting. Outpatient clinics, assisted-living facilities, and pharmacies could also use the game to educate patients. As the public has become more familiar with mobile devices, and apps for such devices have become ubiquitous, the implications for MedMatcher are enormous. By expanding best practices for all forms of learning, and incorporating the simplicity and value of technology, medication understanding could be increased to a point of true significance.