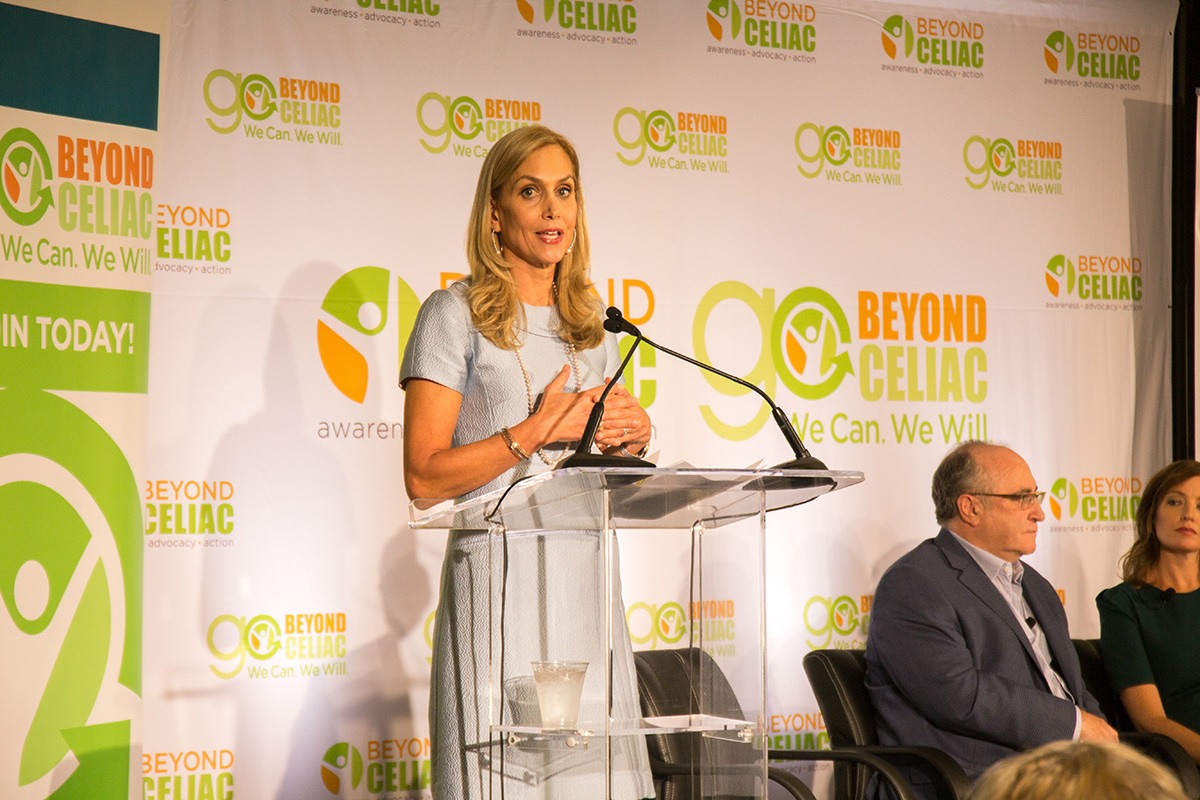 Alice Bast, Beyond Celiac CEO, introduces an expert panel of physicians, researchers and thought leaders in the field of celiac disease at the 2018 Beyond Celiac Research Symposium.
Photo Credit: Beyond Celiac

As the head of Beyond Celiac, a leading global celiac disease patient advocacy and research organization, for the past 15 years, I have learned a lot about disease burden.

Those who have faced the difficult path to diagnosis know that celiac disease is a serious, currently incurable, autoimmune disease that affects much of the daily lives of the estimated three million Americans who develop it.1

One of the most difficult aspects of this disease is the long road to diagnosis itself.2–4 I experienced the challenge of getting an accurate diagnosis firsthand. My journey included seeing 23 doctors, all while dealing with debilitating symptoms and heart-wrenching experiences, including a full-term stillbirth and multiple miscarriages.

Unfortunately, my story is not unique, and it was this difficult path that was one of the catalysts for starting Beyond Celiac. The journey to diagnosis can feel isolating and can affect your relationships, your mental health, and your trust in physicians.5,6 You’re looked upon as faking symptoms or even crazy by some. Healthcare providers may not believe you or brush off your concerns. Some members of the community are advised to go gluten-free before they receive a diagnosis, only to find out later this makes testing inaccurate. Those individuals face the dilemma of undertaking a likely painful “gluten challenge” or of living without knowing if they truly have the disease.

Our organization has helped to increase the diagnosis rate and shorten the time it takes for many to become diagnosed. However, the magnitude of the issue remains huge, and many of those with celiac disease remain undiagnosed or misdiagnosed.1

In a study from Canada, diagnosis in children with celiac disease was commonly delayed, with some cases taking 15 years to be diagnosed.7 In the Journal of the American Medical Association, Dr. Daniel Leffler highlighted another missed diagnosis. “Ms. J” had become anemic 20 years prior and experienced three miscarriages before being diagnosed at age 46.8 A Beyond Celiac Facebook member was told she may have colon cancer only to find out she had celiac disease, despite her doctor previously assuring her it couldn’t be that. The son of another member of our online community ended up in the emergency room after being initially misdiagnosed and given a strong antibiotic. Another woman’s gallbladder was removed when celiac disease was actually the cause of her debilitating symptoms.

Once correctly diagnosed, a person with celiac disease typically is told the gluten-free diet is all that is needed for full recovery. For many, that’s far from the truth. Ciaran P. Kelly, MD, Director, Celiac Center at Beth Israel Deaconess Medical Center/Professor of Medicine at Harvard Medical School notes, “At least 10 percent of those with celiac disease who follow a gluten-free diet have ongoing or recurrent celiac disease-related symptoms or signs and physicians are not sure why that is whether it is continued exposure or other causes.”9 Further, people with celiac disease report a very high burden of disease, comparable to end stage renal disease.10 In one study, 15 percent of patients stated that the diet is so burdensome they regretted being diagnosed .11

The unique challenge required an innovative solution. Jake Hughey, PhD, a celiac disease researcher at Vanderbilt University who has celiac disease himself summed it up, “Celiac disease is tremendously variable in the symptoms people have and how well (or not) they respond to the gluten-free diet. Research would benefit greatly from having access to quantitative population data about the patient journey to improve diagnosis rates and the burdens of living with the disease.”

Go Beyond Celiac asks patients about:

The Go Beyond Celiac registry allows Beyond Celiac to let patients know about clinical trials for which they qualify, and to assist researchers in pre-screening and recruiting potential patients. This reduces a barrier to successful research, accelerates opportunities to improve diagnosis rates, and helps people with celiac disease better cope with this serious genetic autoimmune disorder.

We’ve already learned a lot of interesting things from survey participants, including that more than 50 percent of respondents had at least three years between the time symptoms first appeared and a celiac disease diagnosis, and that more than one-quarter saw four or more doctors before getting a proper diagnosis. What’s more, half of Go Beyond Celiac participants said their doctor did not discuss the long-term consequences of celiac disease with them.

The gluten-free diet is an incomplete and unreliable treatment, and yet it’s all we’ve got. No other options have been developed since the antigen for celiac disease was unearthed some 70 years ago. We deserve better. Celiac disease is an old problem that needs innovative thinking to move the field forward. We need a 21st Century research agenda and Go Beyond Celiac is just that.

To learn more about celiac disease and Go Beyond Celiac visit https://go.beyondceliac.org/. 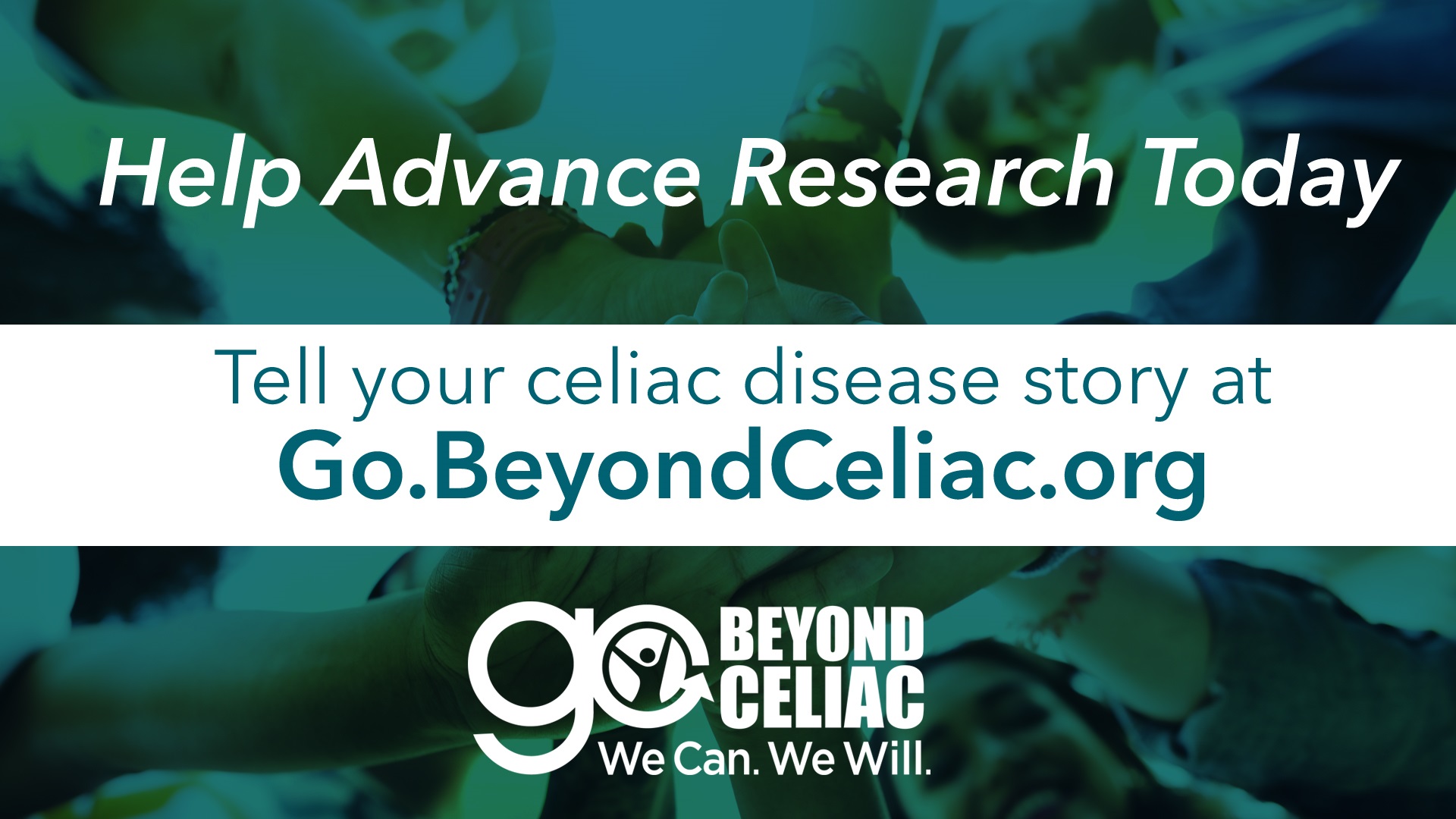