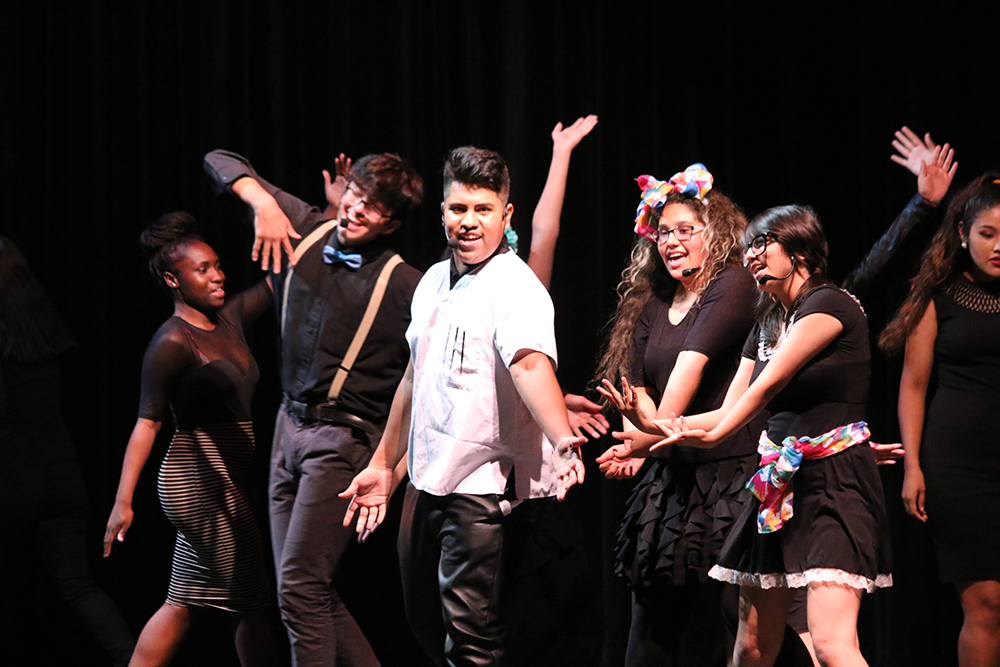 Over the past ten years, numerous studies and reports have come out focused on the benefits of the arts in schools, and the consequences of their absence. Cities and school districts across the U.S. have taken different approaches to acting on the findings, which have included how the arts foster creativity and innovation, increase student achievement and teacher satisfaction, and have an even stronger impact for at-risk students.

In Chicago, the arts resurgence really began stirring eight years ago, in response to a Wallace Foundation report citing the dismal state of arts education in the nation’s third largest school district. Long-time funders and providers of the arts in schools came together with teachers and others in education to determine the steps needed to stem the inequities that had been building across the City for the better part of 30 years. After 18 months of convening involving more than 400 people, Ingenuity was created to find the gaps in arts instruction, foster better relationships between community arts providers and schools, and eventually ensure a quality arts education for every Chicago Public Schools (CPS) student.

From the beginning, Ingenuity’s mandate included data collection and dissemination. After all, there is no better way to determine where arts are and are not, than to collect and share that data. But the real key to Ingenuity’s success has been the integrated way in which data is paired with the advocacy needed to encourage arts-positive policies, and the professional learning needed to enhance the capacity of arts provision across CPS.

The coming together of all these parts is the Creative Schools Initiative, created in 2012 in close partnership with CPS’ Department of Arts Education as a way to activate the district’s first Arts Education Plan. The six goals in the Plan span each aspect of arts provision in schools, from increasing instructors and partners, to dedicating the funding and physical space needed to provide quality instruction. The Creative Schools Initiative is meant to foster the conditions needed to affect that kind of institutional change, and truly embed the arts into the school day.

The aspects of the Initiative: the people, the data, the funding, and the reporting are intertwined with incentives and accountability measures for each stakeholder group. Think of each component connecting to the others to form a circle.

First, the people. CPS created the role of Arts Liaison, a volunteer already on staff who is nominated by their principal to be the arts champion for the school. Most Arts Liaisons are an arts instructor at the school, and this elevation of their role serves to bring attention to the arts, and provides classroom instructors with a point person to help them coordinate arts programming.

Then, the data. Along with coordinating arts programming, Arts Liaisons answer the Creative Schools Survey each spring via Ingenuity’s online portal called artlook® Schools. They provide or verify information including the school’s instructors, number of community providers, budget, and levels of student access, among other key indicators. Community arts providers complete profiles in artlook Partners, including data on the schools with whom they work and the programs they offer. This data is crosschecked, and additional data from CPS and the state board of education are utilized to paint the most complete picture possible. Each school is ranked along the Creative Schools Certification five-point continuum from Incomplete Data to Excelling.

Data drives the funding. When the Arts Liaison completes the Creative Schools Survey, they are awarded funds for arts supplies and materials, simply for providing their data.  The $1,000-2,000 Arts Essentials grant amount may appear small, but the impact is two-fold. Schools have very little discretionary funding, so this makes an immediate difference. The long-term impact comes in the relationship building between the Liaison, other curricular staff, and the principal as they plan the spending. When planning the Initiative, both Ingenuity and CPS were intentional about ensuring funds would go to schools, not vendors, and not to pay the types of stipends afforded athletics coaches. The approach has worked to build much needed resources, and the Arts Liaisons are instead offered professional learning and opportunities to grow in their position. They also earn access to apply for up to $15,000 in Creative Schools Fund competitive grants for arts programs and capital needs. Ingenuity provided more than $1.5 million in grants across 141 schools in the 2016-17 school year. 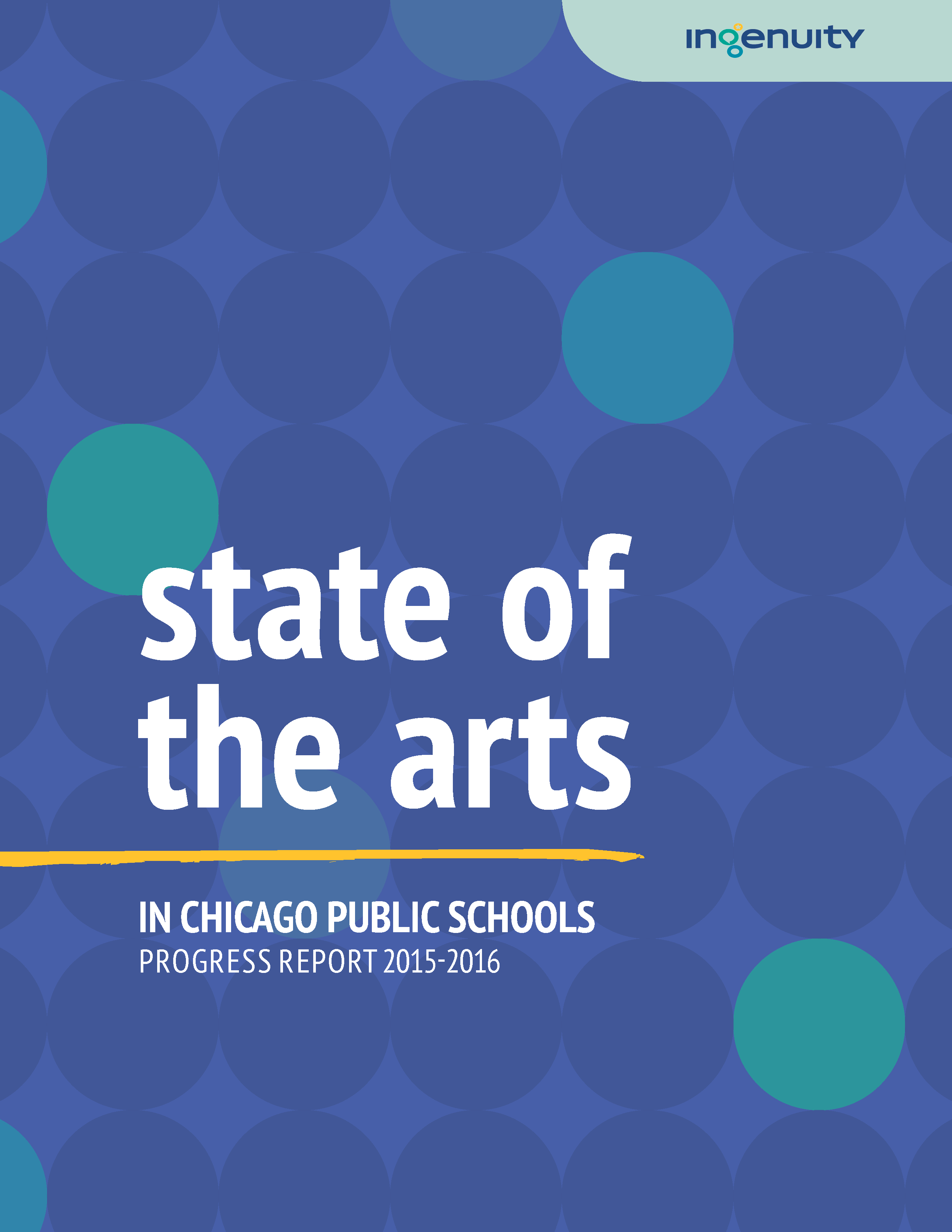 To bring it all together, the reporting. Along with making the data available via artlook® Map, Ingenuity publishes a State of the Arts in Chicago Public Schools progress report each year. Every school and its Creative Schools category are listed. The data are also used to track trends across the district and within neighborhoods and individual schools. CPS also uses the data for each school’s progress report card published each fall, and most recently the Creative Schools Certification was added to the district report card alongside the NWEA and ACT tests and other school and academic measures. Future goals include adding the Certification to the district’s school quality report.

Each part of the Initiative feeds the others. Without the Arts Liaisons, the data would not be available to generate targeted plans and programs, in part funded by the Creative Schools Fund. The fund serves to fill service gaps, and establish equity in access and programs whereby all schools are excelling in the arts. Everyone has a role to play from CPS district leaders, to principals, to teachers, students and parents, as well as the nearly 1,000 community arts providers in Chicago.

The federal administration recently released its first draft budget plan, which increases military spending at the expense of both the Department of Education and the National Endowment for the Arts. This offered a stark reminder of one of the many reports noted above. The Council on Foreign Relations’ 2012 report, U.S. Education Reform and National Security noted that there were four U.S. shortcomings that opened the door to the 9/11 terrorist attacks. Failure of imagination on the part of U.S. security agencies was one. “The Task Force believes that all young people—those who aim to work in national security and those who aim to work in corporations or nonprofit organizations—must develop their imaginations from an early age…The Task Force members believe that to retain this important competitive edge, lessons in creativity—whether in the arts or in creative analysis or imaginative problem solving, must begin in early elementary school."

Ingenuity and Chicago Public Schools have the Initiative.

AmySue Mertens is the Director of Public Affairs.