While most anti-poverty programs focus their efforts either on adults or children, two-generation models provide opportunities for parents and children simultaneously. In other states, two-generational programming has been successful in reducing the student achievement gap, breaking the cycle of generational poverty by providing increased family supports and engagement, and moving the family towards economic security through education, workforce training, and related supported services.

While Diversified’s two-generation model was a worthy investment by the William Penn Foundation, sustainable funding after the initial 30-month grant will be hard to come by. Diversified intends to sustain this programmatic innovation with an innovation within its nonprofit business model. Diversified is seeking to open a for-profit business, whose profits will be used to produce sustainable earned income to fund its two-generation strategy.

The new two-generation model works off the assumption that educating young children while lifting their parents’ income simultaneously would be more effective in reducing generational poverty than serving them individually. While a number of two-gen programs have proven effective across the country, keeping them sustainable has been a challenge. Therefore, a cycle of poverty continues to repeat itself.

More than 400,000 Philadelphians live in poverty, about 26 percent of the population—the highest poverty rate among the nation’s 10 biggest cities. In Point Breeze, where Diversified Community Services is located, the poverty rate is 37 percent. The poverty rate among Philadelphia’s children is 39 percent.1 Research tells us that the biggest predictor of a child’s economic success is his/her parents’ level of educational attainment. According to the Brookings Institute, it takes about five generations for the advantages or disadvantages of family background to die in the Unites States. Therefore, many children in Philadelphia inherit a legacy of poverty that dates back generations.

Ross Thompson, a professor and research affiliate for the Center for Poverty Research at the University of California, has written that children’s early social experiences shape their developing neurological and biological systems for good or ill. The kinds of stressful experiences that are endemic to families living in poverty can alter children’s neurobiology in ways that undermine their health, their social competence, and their ability to succeed in school and in life, says Thompson.2 Attempting to educate young children without stabilizing the home becomes an almost impossible proposition, because unsafe and stressful home conditions prevent the children from learning. Marjorie Sims, Managing Director at Ascend, acknowledges that the benefits of two-gen programs are biological as well. While research has shown that, in neurological terms, children in poverty face barriers to learning, two-gen programs do a great job at reversing those barriers.3

The Ray Marshall Center for the Study of Human Resources says that the goal of a two-generation strategy is to break the inter-generational cycle of poverty by moving the family toward economic security and stability through education, workforce training and related support services.4 Diversified Community Services is a multi-purpose nonprofit that provides quality, nationally accredited early childhood education in the Point Breeze community of South Philadelphia. But what makes it different from other quality childcare centers is that Diversified’s two-generation strategy provides opportunities for both parents and children. This strategy provides economic supports, social supports, and peer support services for the entire family.

According to the Ray Marshall Center, there are three key components to an effective two-generation strategy and five important facilitating factors: 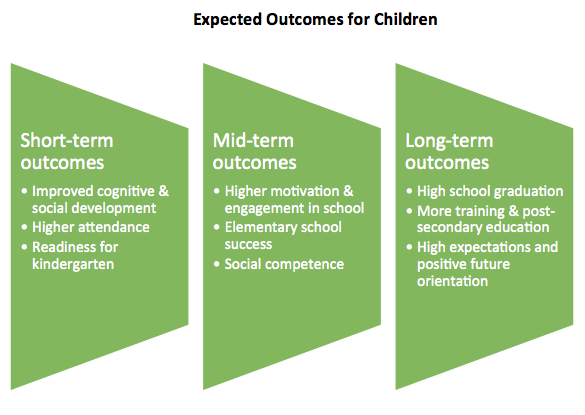 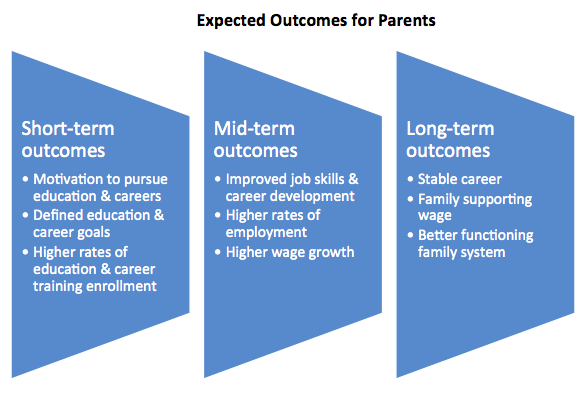 How the Model is Funded

Of the five facilitating factors for successful implementation of a two-generation strategy, the funding model is really key. Integrated and flexible funding streams are important to make it all work. Two-generation models work across various agencies and perform multiple functions including early childhood education, workforce development, adult education, housing, and a host of other social services. Currently, all of these functions are funded by different sources. Two-gen programs should not be funded by a singular source.

Two years ago, Diversified Community Services was fortunate to receive a $438,000 grant over 30 months from the William Penn Foundation to start its two-gen program. It later attracted grants from other private funders. However, in order to sustain its two-gen model, Diversified is exploring additional earned income opportunities in the form of social enterprise.

To help sustain its two-gen model beyond foundation funding, Diversified is seeking to operate a for-profit business, whose profits will be used to produce sustainable earned income to fund its nonprofit program. Diversified could ask a foundation for a half-million dollars to fund its two-gen model for two years, or it can produce earned income to sustain the two-gen model in perpetuity. The for-profit business that has been chosen to operate is Menchie’s, the largest self-serve frozen yogurt franchise in the world.

Many nonprofits are following a market trend of incorporating wholly owned, for-profit subsidiaries into their business models to drive sustainable income. This has been successful because it allows social enterprises to thrive without dependence on external funding by providing a consistent stream of revenue to carry out their social mission. Furthermore, this model gives social enterprises the opportunity to further impact the local economy.

Diversified also operates two large early childhood education (ECE) centers that collectively have operating budgets of more than $2 million and more than 50 employees. While the ECE centers operate under the arm of its nonprofit, the ECE earned income business model is identical to other for-profit ECE centers.

The nonprofit ownership of for-profit franchises has shown to be effective in other areas as well. In the heart of Buffalo, New York, a Subway franchise located in the same building as True Bethel Baptist Church is owned and operated by the church itself. True Bethel has used the franchise to provide employment and job training to the surrounding neighborhood. This successful social enterprise model was featured on the television program, Undercover Boss.

In addition to already having a successful business model, Menchie’s mission is family-oriented and is consistent with Diversified Community Services’ family-centered two-generation strategy. Menchie’s, specifically, has designed their stores to be inviting and fun, and a great place for families and guests of all ages to gather. For Menchie’s, making people smile is the corporate mission statement, with strong value assigned to the connection to families and communities. Profitability is not the goal; it’s a byproduct of the value added to each family who walks in the door.

The frozen yogurt industry is an $8 billion industry and is projected to continue growing. Menchie’s is the largest and fastest growing self-serve frozen yogurt franchise in the world. There is ample room for growth in the Philadelphia market, particularly in the Point Breeze community that Diversified serves. Menchie’s Frozen Yogurt Franchise was ranked among Entrepreneur’s Top 500 Franchises in 2014. The Menchie’s franchise makes business sense for Diversified Community Services, with this being Diversified’s first for-profit business venture. The franchise business model provides a proven and simple model. It has a low buy-in cost of a $40,000 franchise fee and approximately $350,000 for initial startup costs. The self-serve frozen yogurt model also has low operating costs. Lastly, Menchie’s provides business support including:

Two-generational models are the most effective way to reverse generational poverty because of their holistic focus on the entire family. The multifaceted structure requires flexible and nonrestrictive funding streams. Earned income opportunities, particularly social enterprise, give organizations like Diversified the ability to support two-gen models without being defined by the restrictions of a particular funder.

Otis Bullock serves as Executive Director of Diversified Community Services, a 100+ employee community-based organization with more than $4 million in assets. Otis has dedicated his career to fighting poverty, strengthening communities, and ensuring equal opportunity for all Philadelphians.

Otis served as the Outreach Director for the 2007 Nutter for Mayor Campaign, subsequently joining the Administration as the Deputy Executive Director at the Mayor’s Office of Community Service, and later appointed as the Executive Director of the Mayor’s Office of Community Service, managing $7 million of state and federal grant funds, and developing anti-poverty initiatives for the Administration.

Otis has been honored by The Philadelphia Tribune as one of Philadelphia’s Most Influential African American Leaders. He was featured in Billy Penn’s “Who’s Next, The Givers: 15 young Philadelphians shaping the city’s philanthropy sector.” Otis is also a recipient of the 2015 MLK “Drum Major for Justice” Award, and the 2012 Legacy of Leadership Award, presented by West Chester University. Otis currently lives in Strawberry Mansion with his wife, State Rep. Donna Bullock, and two sons Malcolm and Xavier.