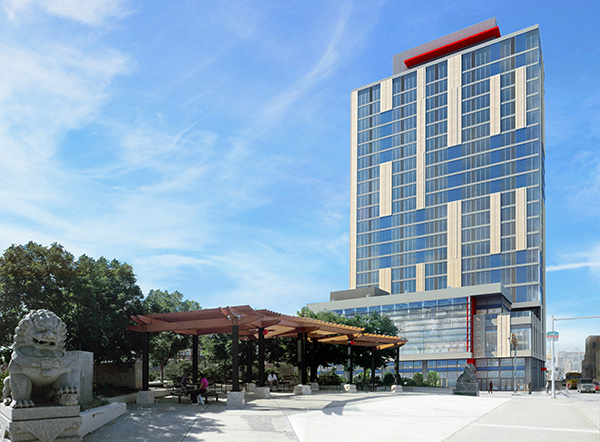 The Eastern Tower Community Center is the $75 million answer to the question posed by a small group of neighbors – where will our children play?

Along the way, this question created other questions. This group of concerned neighbors became neighborhood planners as they envisioned a comprehensive response to Chinatown’s needs for recreation space, health and public services, cultural event and meeting space, and significant reinvestment in the physical landscape around the Vine Street Expressway. When they enlisted a private developer, the City of Philadelphia and the Commonwealth of Pennsylvania, the leading foundations in the metropolitan region started paying attention. So did a number of highly-respected banks and private investors. All told, this New Markets Tax Credit (NMTC) project has raised an astonishing $6.4 million in grant monies alone, or about ten times PCDC’s annual budget. The financing includes a federal Immigrant Investor Program (EB-5), which encourages economic development and job creation, and a tool which has been rarely tested for community development projects.

Eastern Tower Community Center is a landmark project for Chinatown. It will bring bilingual healthcare, early childhood learning, recreation and social services programs to our community. It will create a critical combination of services, businesses and residents to drive momentum for revitalization in a historically blighted landscape on the doorstep of a highway. Finally, it will be a Center that will boost people’s hope for better outcomes for Chinatown, because the Center’s providers will communicate understanding and concern and intervene in a culturally competent way.

Sometimes it’s appropriate to offer small-scale, strategic solutions. But we must respond to big problems with big solutions, because there are very few bites at the apple for Chinatown - it is landlocked in a downtown commercial residential neighborhood and we don’t have the luxury of time.

Chinatown faces a complex array of challenges: a concentration of extreme poverty, linguistic and cultural obstacles to accessing social services and mainstream sources of capital, and physical vestiges of former manufacturing and redevelopment eras which have left its physical landscape bereft, blighted and hostile to new growth. Its expanding role as a hub of services, culture and commerce for the city’s rapidly-growing Chinese immigrant community places the added demand of serving thousands of other people who neither live nor work in Chinatown, but are in every other way community members.

In a city which struggles with high poverty rates and low educational attainment levels, nearly four in ten households in Chinatown make less than $20,000 a year. In Chinatown’s central Census Tract, thirteen percent of residents have less than a ninth grade education. In the City, about one out of two Chinese households are Limited English Proficient (LEP), and fifty-six percent of Chinese households are low-income. Extreme poverty, low education and language barriers, combined with the lack of bilingual Chinese language services in the City, result in several issues: 1) An overwhelming demand on Chinatown’s service organizations, which offer language and culturally-sensitive social services to immigrants. These organizations are also constrained by their limited physical space; 2) Barriers to jobs that provide higher-wage opportunities. LEP immigrants’ choices of employment are limited to labor-intensive, low-wage jobs; and 3) Children and youth who grow up with parents unable to provide them with the same opportunities as mainstream families. In fact, most children of immigrant parents have to carry the family burden of acting as the parents’ interpreters, much to the humiliation of parents.

Despite Chinatown’s incredible population growth (doubling from 2000 to 2010), it must overcome major physical obstacles to development, including decades of disinvestment and blight in the formerly industrial area north of Vine Street. The elephant in the neighborhood is the Vine Street Expressway, a high-speed, high-volume, twelve-lane local thoroughfare from the urban renewal era which has stymied growth northwards. The area is littered with vacant lots, former industrial uses and buildings long-abandoned by the dwindling manufacturing companies.

A powerful combination of community spaces, bilingual services, residents and small businesses housed in a physical development of a significant scale is the solution. Eastern Tower is not just one person’s, one organization’s or one government’s solution to a series of problems. Rather, it is the outcome of a community and its members who have embraced the power of self-determination and who have, in the process, invoked the confidence and support of neighbors, governments and foundations. Eastern Tower is truly a collaborative solution of private and public investment to solve a community problem. Beginning with community demand for positive change, the solution was an outcome of community planners leading a community-driven process, supported and made possible by an array of private and public actors.

Eastern Tower is the capstone, transformational phase in a strategic series of responses to change Chinatown’s physical environment. Physical development of Chinatown North has occurred over the last twenty years and includes multiple phases of housing development and streetscape improvements. These projects that have come before Eastern Tower are part of a broader neighborhood planning vision for Chinatown and have laid the groundwork for Eastern Tower’s success.

At 195,000 square feet, and located on the doorstep of the Vine Street Expressway, Eastern Tower delivers a strategic combination of uses at a scale that has no option but to be impactful. What was formerly a vacant parcel and a remnant from the Vine Street Expressway construction thirty years ago will be replaced with a purposeful community building, hosting programs which will raise the level of service to low-income families.

The Center’s future tenants will offer a comprehensive spectrum of services, including early childhood learning, primary and related healthcare, youth development, STEM, social, recreation, cultural and intergenerational services. Multiple service providers, housed under one roof, will encourage cross-promotion of services and a comprehensive service destination for all family members, from children to elders.

Eastern Tower establishes a Center and destination for those who seek help. It makes it easy for people to want to seek healthcare when a Center offers a comprehensive suite of medical specialties. It also makes it easy for service providers to want to locate at the Center. The Center is within three blocks of almost 1,000 pre-K through eighth grade students who require pediatric healthcare. It makes sense for parents, who are looking for afterschool care for their children while they still are at work, to send their children to the Center. It makes sense for the Center to offer sports activities to the many high school-aged students who consider Chinatown as a hub and destination after school. Eastern Tower serves as a hub in the truest sense. It addresses barriers on both the service and demand side. On the delivery side, Eastern Tower is a solution for service providers who need Eastern Tower’s help to find language and culturally-competent staff to serve the Chinese-speaking community.

Mayor James Kenney, City Council president Darrell Clarke and Deputy Mayor Otis Hackney returned from a visit to Ohio and put forth a vision of community schools. This vision recognizes that if you centralize services, and people use the services, you can better reduce health, income and learning disparities. Beyond convenience, this model brings service to the community, where residents feel most secure and trusting. Similarly, Eastern Tower implements a community-based model. 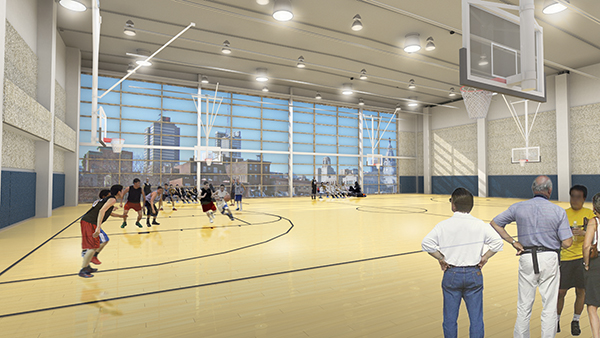 Eastern Tower is the outcome of an immigrant community’s desire for change, and the result of a resident-driven process in partnership with community planners that has empowered Chinatown to determine its own solutions. Collaborative approaches to community development are not new, but they are very hard to accomplish. Eastern Tower is not only Chinatown’s solution, but one adopted by private and public partnership, which is financially supporting and advocating for this project. Each partner validates and supports the other.

Eastern Tower Community Center is a project that brings scale for maximum impact to address social and physical challenges in Chinatown. It is a response to an underdeveloped area and will serve as a landmark development that underscores Chinatown’s standing as a regional hub. It will lay the path forward for the expansion of the commercial corridor, create jobs and have a significant impact for the neighborhood. Eastern Tower will function as a headquarters for cultural and language-appropriate services not only for the residents of Chinatown, but especially for those who live outside Chinatown and consider Chinatown their community. When communities drive their own futures, they also redefine their own identities.