Founded in 1985, the New Kensington Community Development Corporation (NKCDC) has been an integral player in bringing change in the form of equitable development to Fishtown, East Kensington and Port Richmond. For thirty-one years, NKCDC has earned the reputation of being an innovative, "can- do" organization, improving the neighborhoods it serves.

A recent example of the CDC's innovative approach is Awesometown, a project in Fishtown that involves construction of fourteen new homes on a vacant brownfield site. The development is being done with no government money, although NKCDC obtained the land from the City of Philadelphia for one dollar.

NKCDC partnered with Postgreen Homes, a private developer in Northern Liberties and Fishtown, to build the homes on the 400 block of Moyer Street seeking LEED platinum certification. Ten of these homes were sold at market rate, roughly $430,000. The proceeds were used to internally subsidize the other four homes to make them affordable to moderate-income homebuyers earning less than the area's median income. 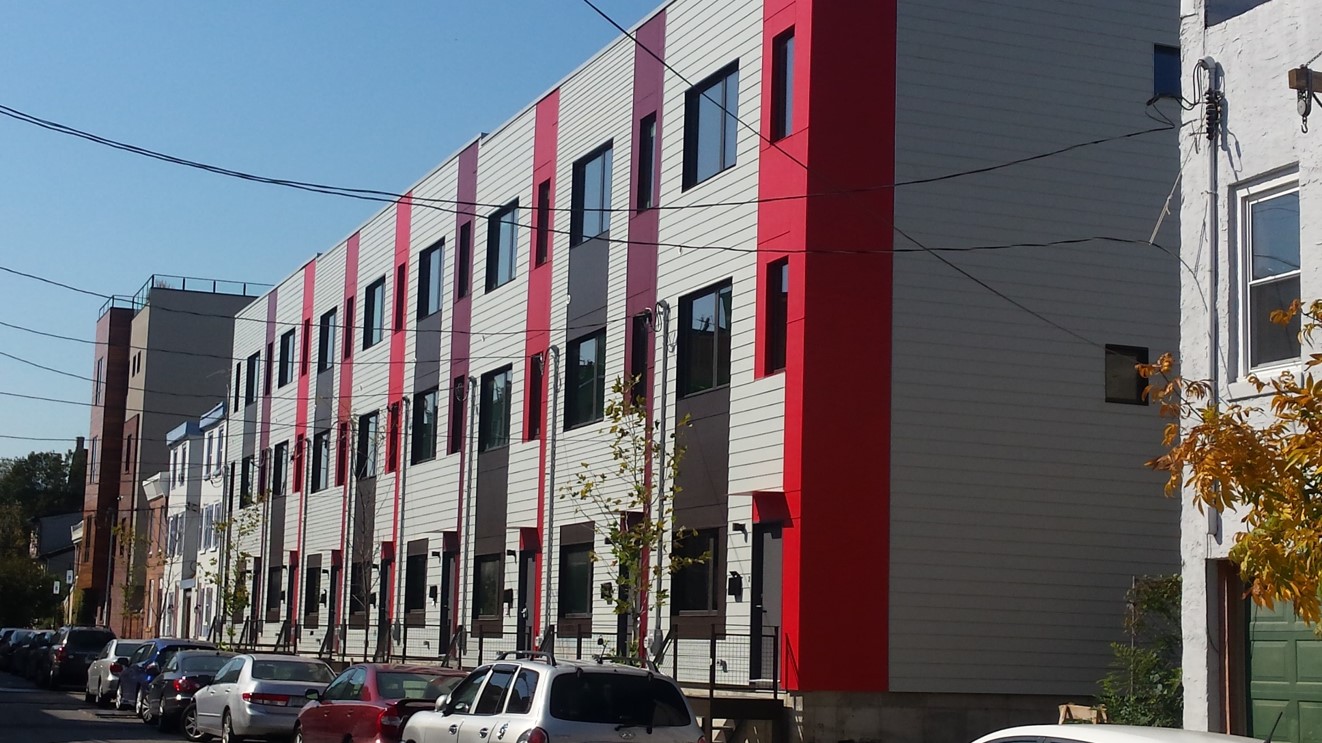 Chad Ludeman, president and founder of Postgreen Homes, says in an interview with Next City, “This is one of the few public-private partnerships where we’re using private funding in order to bring a mixed-income development to Philly.…This is one where we’re using a normal construction loan from a normal bank to get this off the ground.”

Kevin Gray, real estate development director at NKCDC, explained how this loan worked. In this case, the proceeds from the market-rate properties are being used to “fill the gap between what you pay as an affordable buyer versus what you pay as a market rate buyer.” NKCDC held a public lottery for the four affordable units.

All the homes are the same, with no one able to tell which units are affordable. “Not singling out someone who has a different income level was the goal,” Gray said. “What you do by making it mixed-income is prevent isolation and segregation socioeconomically.” This is unlike most affordable housing developments as “the funding sources that make these projects work require that the income levels are pretty much in the same range,” said Gray.

Gray sees the benefit in a mixed-income model like Awesometown. “You’re including everyone in the model. You’re not creating a separation of income levels. You’re providing housing for an inclusive population.”

When NKCDC began thirty-one years ago, according to Gray, “the majority of the work we did was really in Fishtown proper.” The CDC has an extensive housing counseling department that offers first-time homebuyer assistance and foreclosure prevention counseling, among other things. It began its work in Fishtown by purchasing single-family homes, “in poor condition and with really low value from the City and Sheriff sales.” They rehabbed these properties in what Gray refers to as a “block-by-block strategic stabilization,” to be sold to low- and moderate-income buyers. According to Gray, most of these income- eligible homebuyers were being funneled through the NKCDC housing counseling program. Gray went on to say, “So you build a neighborhood that way, building it from the ground up.”

As any Philadelphian knows, in the years to come, Fishtown’s property values skyrocketed. As Center City rents increased, people were forced to the next neighborhood outside of the core. For example, according to Zillow, a house on Memphis Street in Fishtown sold for $60,000 in 2000. This same property was sold for $220,000 in 2010 and was recently listed for sale in December of 2015; the asking price: $327,000. The Philadelphia Daily News investigated gentrification and found that from 2010 to 2014, Fishtown rent increased by forty-one percent. NKCDC had succeeded in reviving this neighborhood and the diligent work it did in the years before ensured that long-time members of their community still had a place to live.

After seeing such great success from its efforts in Fishtown, the organization turned to East Kensington, with the hopes of stabilizing a community in despair. The latest census data show that 47 percent of Kensington’s residents live below the poverty line. In East Kensington, the effort was started with a partnership formed between the Philadelphia Horticultural Society and NKCDC.

From 1995 to 2001, vacant lots that had been filled with waist-high trash and deteriorating structures were cleaned, trees were planted, and split-rail fences installed to dissuade short dumpers. This improved the appearance of East Kensington, specifically one of the neighborhood’s major corridors, Frankford Avenue.

NKCDC’s goals for redevelopment in East Kensington were similar to the organization’s goals in Fishtown, but as Gray points out sometimes “we need to step back and ask what do the residents want.”  In 2004, NKCDC helped establish the East Kensington Neighborhood Association (EKNA), creating a relationship between NKCDC and community residents.

Gray said, “It shouldn’t be us telling them what to do, but creating a dialogue that enables us to tie the goals of the neighbors with what you believe as an organization to be the best thing to do for the neighborhood.”

Also in 2004, NKCDC released its comprehensive plan for Frankford Avenue, the “Frankford Avenue Arts Corridor” to redevelop Frankford Avenue and revitalize East Kensington. According to this comprehensive plan, “NKCDC has one goal for the Frankford Avenue commercial corridor (between Girard and Lehigh Avenues): to create a destination arts district.” The report also states that “The commercial corridor will become the commercial center of a community that embraces the creative class. Artists will build equity in the corridor and become a key community asset.” Art galleries and workspaces were moving to Kensington, with artists soon to follow, as they were being priced out of neighborhoods to the south. The big thing missing in Kensington was an attractive affordable housing complex for artists.

In September of 2005, NKCDC opened Coral Street Arts House near Frankford Avenue. Using Low Income Housing Tax Credits, the organization rehabilitated an old textile mill, Beatty’s Mills Factory (or Powell Mills), and converted it into twenty-seven affordable rental apartments for artists. Gray talked about the effect this project had on the surrounding neighborhood. 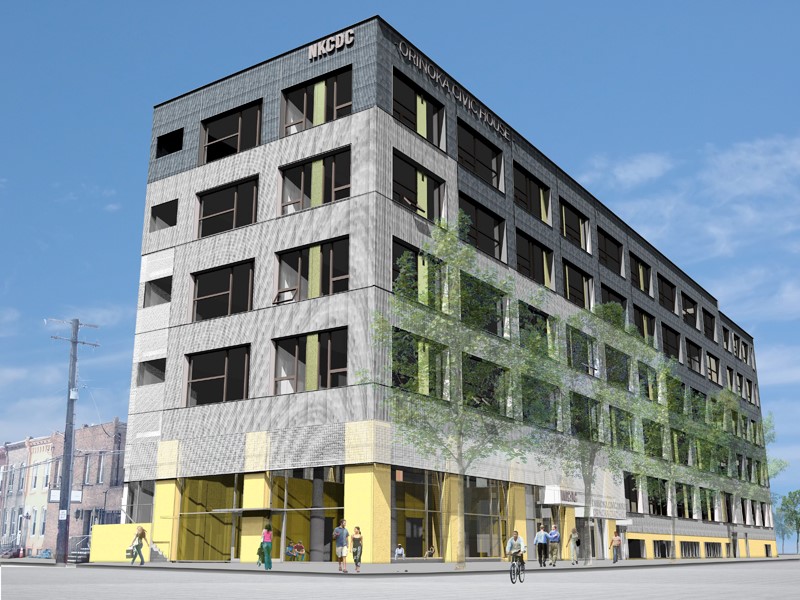 By 2014 more than forty percent of the industrial buildings in the surrounding area had been or were in the process of being rehabilitated.  In addition, Gray mentioned that a few of the artists who called Coral Street home at one point had bought homes in the surrounding blocks of East Kensington. Another sign of progress came when new $400,000 row homes were built across the street from Coral Street Arts House. The arts are now a part of this neighborhood’s fabric, on display during events like the Trenton Avenue Arts Festival and the Kensington Kinetic Sculpture Derby.

“Before SNBL was even formed no one would come out, no one wanted to meet and talk with people, they were afraid,” Gray said.  Now, on average, thirty members attend the monthly meetings at SNBL.  After extensive community engagement, NKCDC released the “North of Lehigh Neighborhood Revitalization Plan” in 2013.

NKCDC recently started rehabilitation of an old abandoned textile mill, Orinoka Mills. This will be the organization's catalyst for change in this neighborhood: Orinoka Civic House, fifty-one units of affordable rental apartments with retail space and home to NKCDC’s new office.

“And it’s not that we are leaving where we are currently," Gray said. “It’s just that a lot of the momentum is already there (East Kensington) and you see private investment happening on its own.”

The Orinoka Civic House will bring development to a neighborhood where fifty-three percent of the residents make less than $25,000 a year. In order to spur private investment within this neighborhood, NKCDC needed a large-scale and visible project that could become a game-changer and attract private market development. As an $18 million project, Orinoka appears to have the capacity to do just that.

NKCDC tapped many different funding streams to make this project happen. It was one of seven CDCs nationally to receive a pilot predevelopment design grant from the Enterprise Community Partner’s Foundation, and was awarded three loans from the Federal Home Loan Bank’s Affordable Housing Program. It will also use Low Income Housing Tax Credits and funding from the City of Philadelphia to complete the redevelopment.

In addition, the Energy Coordinating Agency provided home repair and weatherization services to low-income homeowners on the blocks surrounding the development.

“Seeing those incremental changes over the course of a few years and slowly building up to the organization being able to do Orinoka has been incredible,” Gray said.

Cormac Ferrick is a recent graduate from the University of Delaware where he earned a Bachelor of Arts in public policy with a concentration in urban planning, development and historic preservation. A native of South Philadelphia, he is currently the policy and research intern at the Philadelphia Association of Community Development Corporations (PACDC).