When Harold Barrow discovered ACHIEVEability, a West Philadelphia nonprofit, in the mid-1980s, he was struggling to raise two children while living with addiction and homelessness. He embraced ACHIEVEability’s Family Self-Sufficiency Program, which helped him obtain stable housing for his family, while a team of coaches worked with him to develop parenting, personal and financial skills that he used on his journey from an eighth-grade education to a master’s degree in social services. Today, Harold shares his expertise as a self-sufficiency coach at ACHIEVEability. His story is both a reminder of the value of the organization’s mission and a model for others as he helps shape the lives of countless individuals who embrace the program.

Harold writes, “People remain in poverty because they don’t have skill sets and opportunity to do anything else. So poverty just becomes the acceptable way of life. Education is what breaking the cycle of poverty is all about.” ACHIEVEability’s program pairs the provision of a safe and affordable home with these tools to break the generational cycle of poverty. Its evidence-based model mandates rigorous admissions criteria for single-parent families who are homeless or at risk of homelessness. The admissions process identifies individuals with the motivation to change the trajectory of their lives and the dedication to use education to do it. The social impact for families and the broader community is meaningful. In FY2014 alone, 19 parents earned college degrees, and degree-earning participants who exited the program in FY2014 increased their annual wages by over $15,000; meanwhile, 63% of currently enrolled participants have seen their incomes increase by an average of $4,200. The impact on families is evidenced by high-school graduation rates for participants’ children that typically exceed 95%, and over two-thirds attend college; both of these are well above city averages.

As a pioneer in the use of tax credit projects to develop and manage affordable housing, ACHIEVEability has built a portfolio of over 150 residential units that have become homes for its participants. However, when ACHIEVEability undertook a strategic analysis in 2012 that identified a key competency as the development of self-sufficiency through education and coaching support, the organization was also seeing a changing landscape in financing and managing affordable housing that made leadership consider new models to preserve and expand its transformational mission.

ACHIEVEability leadership considered the concept of the Flywheel Effect, popularized by Jim Collins in his book, Good to Great. The organization recognized that funding, in the form of contributions, grants, rental revenue and real estate development fees, allowed it to invest in affordable homes, programs and services. When implemented effectively, these investments generated outcomes such as the social impacts described above that kept the wheel turning. Meaningful outcomes drove funding, which drove investments. Unfortunately, the inconsistency of real estate development revenue and lost expertise in the highly complex area of Low Income Housing Tax Credits threatened to slow the flywheel down at the same time that the 2008 financial crisis impacted numerous nonprofit organizations.

Enter the Mission First House Group. Founded in 1988 in partnership with the City of Philadelphia, HUD and the Robert Wood Johnson Foundation, Mission First has grown to manage housing for over 3,000 individuals in the mid-Atlantic. Traditionally, Mission First has served populations including veterans and individuals living with mental health challenges. The organization pairs effective management with an innovative approach to property development and back-office operations that makes it a “go-to” choice for partners looking to invest in their communities. At the same time, affordable housing developments increasingly include supportive services, but they are much less intensive than those that ACHIEVEability has been offering for over 30 years.

An affordable and safe home is a critical component of Mission First’s vision for its residents to live independently. At the same time, Alfredo de la Peña, Mission First’s Chief Operating Officer, realizes that providing housing and providing services can be two different competencies. With a small but growing tenant services department, Mission First has recently made investments to expand services to its residents. De la Peña has structured the organization to “focus on what we do well” while also offering deeper levels of services to those who are interested. He declares, “We dedicate ourselves to helping our tenants every day. The impressive outcomes ACHIEVEability demonstrates are a game changer; they change the direction of lives”

Both ACHIEVEability and Mission First Housing Group have a strong understanding of what they are passionate about, what they do well and what drives their resource engine—the key components of Jim Collins’ “Hedgehog Concept.” At the same time, external influences are constantly suggesting new avenues of growth or service that could either complement or threaten the existing offerings. As both organizations contemplated their futures, they identified the basis of a partnership that would allow each to critically focus on what they did best. 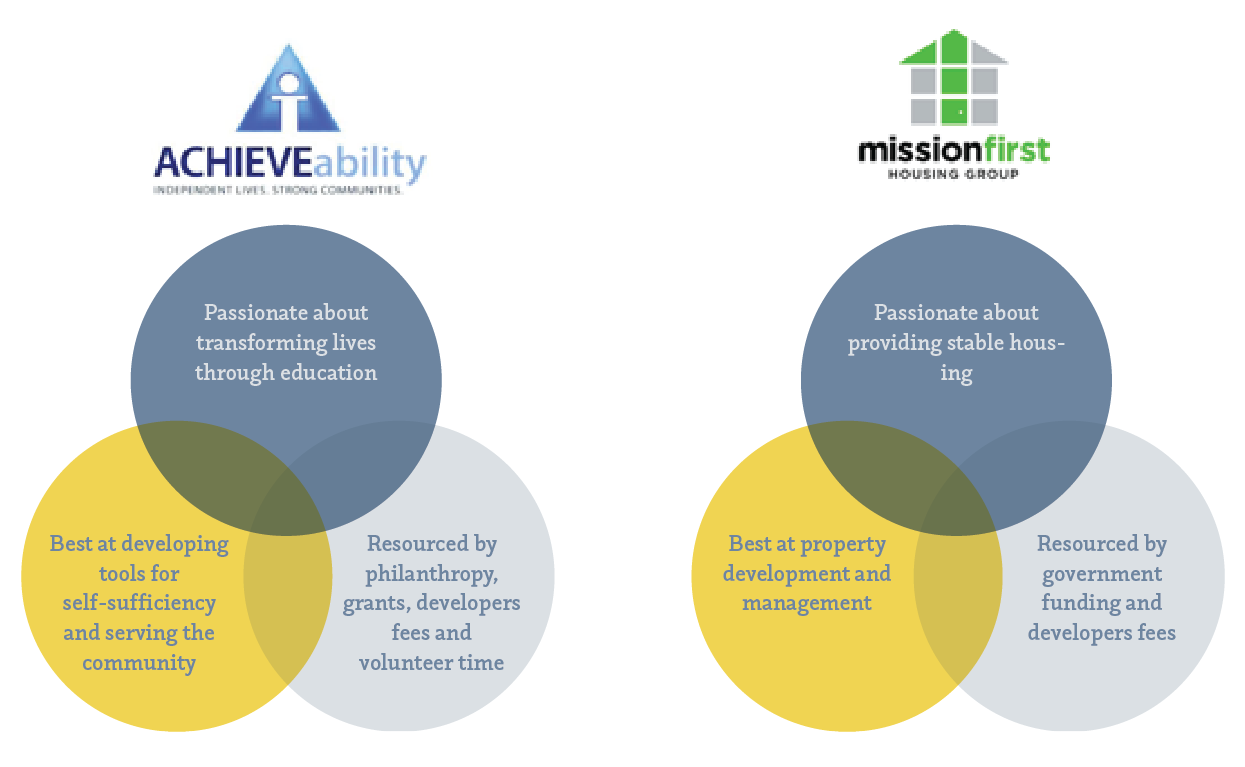 As they explored an alliance, the two organizations discovered that they had complementary skills and needs. For example, ACHIEVEability faced the challenge of renewing 15-year tax credits that were set to expire in the coming years in a competitive and regulatory environment that was very different from the climate when the credits were originally awarded. Mission First is expert in this arena and has been recognized by investors and government alike for reinvigorating seven projects representing over 250 units that faced expiring tax credits and extending their useful lives by an additional 30 years.

At the same time, Mission First realized that depending solely on funding from government and developer fees limited its flexibility. ACHIEVEability has long cultivated philanthropic engagement through volunteering and fundraising. Its annual spring “Food for Thought” event raises over a quarter of a million dollars to support the work of breaking the generational cycle of poverty. Such engagement requires measuring outcomes and community impacts, another important strength of the organization. A 2011 report by Econsult showed that ACHIEVEability participants reduced their reliance on public subsidies by 25%, increased their earned income by 54% and increased their taxes paid by 84%. Through the alliance, Mission First seeks to develop increased the levels of donor engagement and outcome documentation that has been the hallmark of ACHIEVEability.

Nonprofit mergers aren’t for the faint of heart. A 2012 study by Wilder Associates found that over half of combined organizations saw a reduction in contributions and grants. But on the other hand, the average organization actually increased revenue by 9%. Because Mission First and ACHIEVEability have limited overlap in funding sources, especially from corporate sponsors and grant makers, they are less likely to see cuts than would a combined organization. In fact, strengthening both organizations has positioned both to embrace opportunities that might have previously been out of reach.

Wilder Associates goes on to suggest that, “When organizations were able to identify potential mutual gains that could be realized in the merger there was a statistically greater likelihood that staff would integrate well into the new organization and be better aligned with the needs of the new organization and those whom it intended to serve.” The potential gains have been carefully identified and articulated by the leadership and boards of both organizations. The alliance with ACHIEVEability helps Mission First achieve its own service goals by potentially expanding an innovative and proven services program to Mission First residents while at the same time Mission First brings its expertise in real estate and back-office operations to ACHIEVEability.

Kevin Dow, Senior Vice President of Impact and Innovation for United Way of Greater Philadelphia and Southern New Jersey agrees: “This alliance will allow the combined organization to serve even more of the basic needs of Philadelphians and reflects sound management in a challenging funding environment for area nonprofits.” 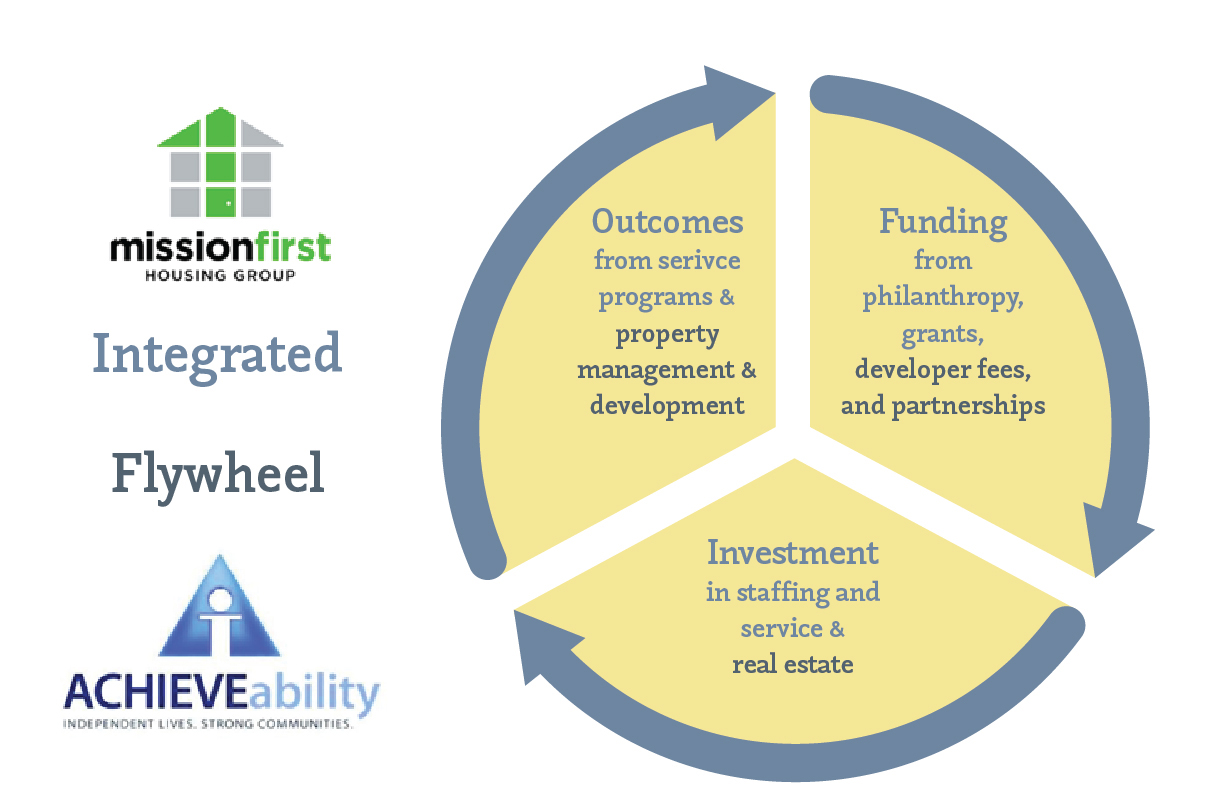 About the Author: Marc Balcer is an entrepreneur who likes to develop transformational ideas into real-world solutions. He is currently pursuing a master’s degree in nonprofit leadership at the University of Pennsylvania.

About Mission First: Mission First manages over 2,400 units of affordable housing with a track record of sophisticated real estate development financed with Low Income Housing Tax Credits in the mid-Atlantic region. It employs over 100 individuals, with its headquarters in Philadelphia.

About ACHIEVEability: With a focus on West Philadelphia, ACHIEVEability runs evidence-based social services through its flagship Family Self Sufficiency Program and Community Services Office. In FY14 alone, 19 parents earned degrees while working and investing in personal development.