In 2009, a contract from the City of Philadelphia and local foundation support enabled Depaul USA to open Depaul House, a 25-room, transitional housing program for homeless men in Germantown, Philadelphia. Over the next two years, Depaul USA expanded its programming and staff at Depaul House. During this time, the funding model for Depaul USA essentially remained the same. The city contract covered approximately 60 percent of program costs and grants from foundations covered the vast majority of remaining expenses. These funding investments proved effective. Benefitting from robust services focusing on employability, each year approximately 80 percent of Depaul House graduates transitioned to independence— securing jobs and places to live.

The Need for a Sustainable Business Model

The Need for a Sustainable Business Model

By 2011, Depaul USA was planning for further growth. Expansion, however, required a more sustainable financial model. While the city and foundations remained champions of Depaul USA’s work, an environmental scan revealed challenges. Budget cuts and looming deficits threatened future discretionary spending for housing programs at the federal, state and local levels. Foundation funding, by nature, was not guaranteed to be perpetual. Over time, some funders were certain to turn to other issues and needs.

In response to these challenges, Depaul USA determined to move forward on three fronts. First, programs would be reviewed to reduce base operating costs in an effort to become increasingly sustainable. Second, Depaul USA would develop a robust individual giving program. Third, Depaul USA would work to increase its unrestricted earned income.

As Depaul USA’s primary goal was revenue maximization, my interest pivoted to “social franchising,” a sub-sector of the social enterprise movement. I learned that, across the U.S., more and more nonprofits are purchasing and operating franchise businesses, including restaurants and service companies, to generate operating income. The logic behind the franchise model is compelling. Franchises provide nonprofits with things they often lack—proven business plans, developed operating systems, brand names, marketing programs, and ongoing advice and assistance. All of these inputs exponentially increase a new business’ chances of success.

This recommendation was based on affordability and low barriers to market entry. Cleaning franchises typically do not require costly investments in physical plants or inventory. Many also offer guaranteed contracts or “books of business” to their franchisees. In addition, the commercial cleaning sector has a reputation for being recession-resistant and the local market is large and not saturated. Our review of franchise business models revealed that a modest investment could produce $12,000 in unrestricted revenue annually for Depaul USA with the potential for significant future growth. Moreover, residents of Depaul House often found work as janitors, so the new business would have the added benefit of a potential in-house source of labor.
Depaul USA staff researched and interviewed different commercial cleaning franchises, ultimately selecting Heits Building Services as its preferred franchisor. Depaul USA began contract negotiations with Heits and drafted a grant proposal for local foundations requesting seed funds to purchase the franchise and a van to transport workers, as well as hire an attorney specializing in social enterprises to determine and establish the franchise’s legal structure. In a nod to its location on the campus of the Church of the Immaculate Conception, Depaul USA christened its new business “Immaculate Cleaning Services.”

After learning about Depaul USA’s grant request, Laura Kind McKenna, Managing Trustee of the Patricia Kind Family Foundation, reached out to Depaul USA and made an intriguing counter-offer. Instead of making a grant to Depaul USA, she proposed a multiple year low-cost loan with a gradually increasing payment schedule. Ms. McKenna noted that structuring her foundation’s investment in Depaul USA as a loan would provide multiple benefits. “This loan can do multiple duties,” she told me. “Initially, the funds will help Depaul USA launch a social enterprise. As Depaul USA repays the loan, the funds can then be re-invested in other programs that benefit still more Philadelphians.” According to Ms. McKenna, the loan will also help Depaul USA run its janitorial franchise as a true for-profit business. “In order for Immaculate Cleaning Services to succeed, it is very important that Depaul USA think like a business. A loan creates greater incentives than a grant to focus on the bottom line and be fiscally disciplined.” 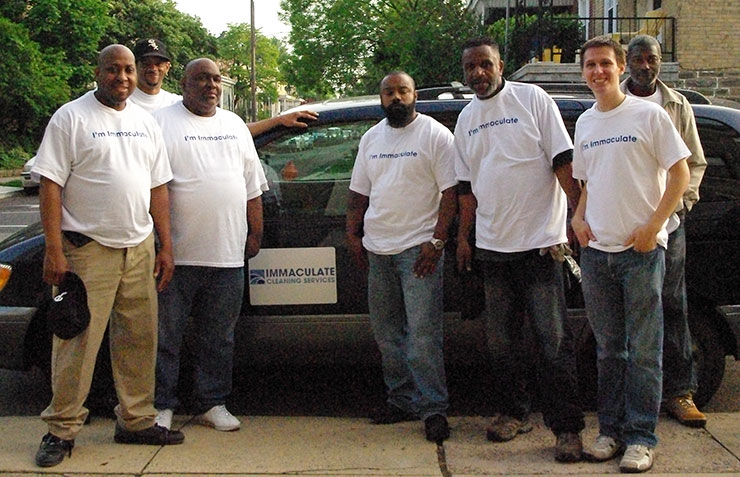 Revenue from Immaculate Cleaning Services alone will not resolve Depaul USA’s financial challenges. A material change to our bottom line requires investment of a scale far greater than Depaul USA’s current capacity. It would also likely require multiple partners. To this end, I am exploring the concept of a “social franchise fund” seeded by a consortium of nonprofits, foundations and venture capitalists. The fund would allow member nonprofits to take equity positions in new franchise ventures across the Delaware Valley without assuming the resource-consuming responsibility for these ventures’ day-to-day operations. Professionally and sagely administered, the fund could generate significant returns for the nonprofits while simultaneously catalyzing the creation of job-generating businesses in neighborhoods across the region.

In the interim, the process of purchasing and inaugurating a franchise has increased Depaul USA’s board’s familiarity and comfort with social enterprises. It has also created a more entrepreneurial staff culture. My goal is that this familiarity and the success of Immaculate Cleaning Services will create the appetite for a larger franchise venture in the future. For her part, Ms. McKenna told me she would like to see more small and medium-sized Philadelphia foundations offer program related investments (“PRI”) to area nonprofits. “PRIs like the Depaul USA loan are straightforward to structure and, given their financial return, they allow foundations to make more investments and impact more programs and people,” she explained. “The Patricia Kind Family Foundation views its loan to Depaul USA as a potential model that can be replicated throughout the Delaware Valley.”

Charles W. Levesque, Executive Director, Depaul USA, has a law degree from Northwestern University, a Masters in Public Administration from the University of Illinois and graduated from Georgetown University, School of Foreign Service. He served as Chief Operating Officer and General Counsel for the Interfaith Youth Core, Chicago, June 2007 to August 2010, was Deputy General Counsel for the Chicago Housing Authority, August 2002 to February 2007 and Program Officer for the U.S. Department of State, Diplomat, 1996 to July 2002.