There has been a lot of talk about device-infused programs driving results and whether or not one-to-one programs can create a culture that is fueling the integration of technology. The iPad program at MaST Community Charter School is a little more than a year old and was implemented and rolled out with student ownership and environment as the key factors in the equation. iPads are devices that have quickly risen to the forefront of the education discussion. Are they the key to the success of our children’s moving into the future or are they simply a distraction and a threat to the organization that affects the focus required for student growth? There have been many debates about this topic, most of which surround the idea that devices are replacing textbooks.

MaST decided to take on this challenge and presented a new way of looking at one-to-one devices by thinking about them as replacements for a school supply product called the Trapper Keeper used in the1980s. The goal was simple: We wanted every student to have access to a device that could store and function every necessary document and application that would coincide with what students were learning in the textbooks.

MaST Community Charter School in Philadelphia has grown over the past three years by offering an innovative platform of personalized learning in combination with the tools that fit a 21st-century futuristic school environment. This learning has been driven by the ability to continue to push the learning environment into more hands-on development of technological resources that help to drive the imagination with a focus on STREAM (science, technology, robotics, engineering, arts and math). MaST has been educating students since 1999 and has continuously pressed the gas to accelerate. Over the past two years. it has implemented a one-to-one iPad program that replaces the idea of the Trapper Keeper and follows a plan that was developed on “cloud-based” apps that allow students to use the devices in an educational manner but gives them the freedom to personalize their usage.

The result is that over 5,000 applications per year over the last two years have been submitted from students who long to attend, but because school enrollment is “capped” by the School District of Philadelphia at 1,250, the school cannot grow or expand. In a city that hopes to change education for the better, innovation is certainly on the list, which MaST clearly addresses, but unfortunately, MaST isn’t getting respect from the surrounding district. However, MaST is one of the only top schools in the city that faces a lottery selection process and that cannot choose or evaluate its students ahead of this process.

Vision for the iPad Program

Every vision starts off with goals, and MaST viewed its iPad program goals as simple: “We want iPads to be learning devices that coincide and help to develop students to be better and more efficient managers of content that will help them to succeed in the classroom.” This mission statement is a bit different from the articles you read in the everyday magazines about other educational institutions that utilize devices in their programs, because with our program the students have the  flexibility to maintain and create ownership of their devices. MaST created a pool of apps that were key in giving the students a much-needed start with this mission. Every app on their iPads was cloud-based, meaning they could access their content from anywhere. For example, one app, Evernote, syncs with the cloud application so that if students are away from their iPads, they can access all notes via the website evernote.com. Other apps include Google Drive, which allows every student access to mobile word processing, database, spreadsheet and also presentation software, and Educreations, which allows every teacher and student to have an interactive whiteboard in order to write on their iPads. There is also Bamboo, which turns every iPad into a writing device with a stylus, and a full-size graphing calculator, which saves students from purchasing and dragging home a calculator every day, along with a daily planner app called myhomeworkapp, which allows students to completely replace their daily planners and lets them access the app from any computer via the website. The model is unique in the sense that the planning for each cycle of iPad rollout was built around a few key steps: having an organized MDM (management device system; we use the Casper Suite by JAMF software) for the application rollout; the ability for students to make each iPad their own and give them a sense of ownership by giving them a core set of apps but the freedom to install other apps to help them in the learning process; and finally, the ability for teachers to suggest and install applications relative to their content areas. The MDM allows students to enter a library of apps and “click to install,” which saves time because it can be done in under a minute.

MaST made it mandatory for each high school student to have an iPad, but with three options. The first option was that MaST would give the iPad to the student as a loaner for the year, but the iPad would have to be given back before the summer. Second, the student could buy the iPad or set up a payment plan to do so in order to own it. And, lastly,  the student could lease the iPad with an option to buy at the end of the three-year period. MaST created its own system for purchasing iPads but offered them at a discount and offered three years of coverage insurance on the iPad for $100. The only difference in purchasing the iPad was that a student would get to keep it over the summer and no return was necessary. This was widely appealing, with about 70 percent of the 9th grade population buying their iPads and 60 percent buying the insurance. This allowed MaST to apply those funds back to the technology budget to help offset the cost of fronting the iPads for the 10th graders. A rollout that was planned to be implemented over three years took about one year to implement for grades 9–12. The total cost of ownership and savings to the school was also found in apps like the graphing calculator—where a normal TI calculator would cost close to $100, the app would only cost about $10. If you look at the overall savings across each application for each subject, you will see that the device pays for itself in a short period of time, and it also brings great value to each student.

Although the iPad cannot currently be used for state testing, the TCO the school has saved just by not having to buy as many calculators and by students’ being able to carry just their iPads has been a huge advantage.

Preparing for the Future

There was a recent survey on appstorm.net that weighed in on the public’s view of devices. The results were very divided, as shown on the chart below. 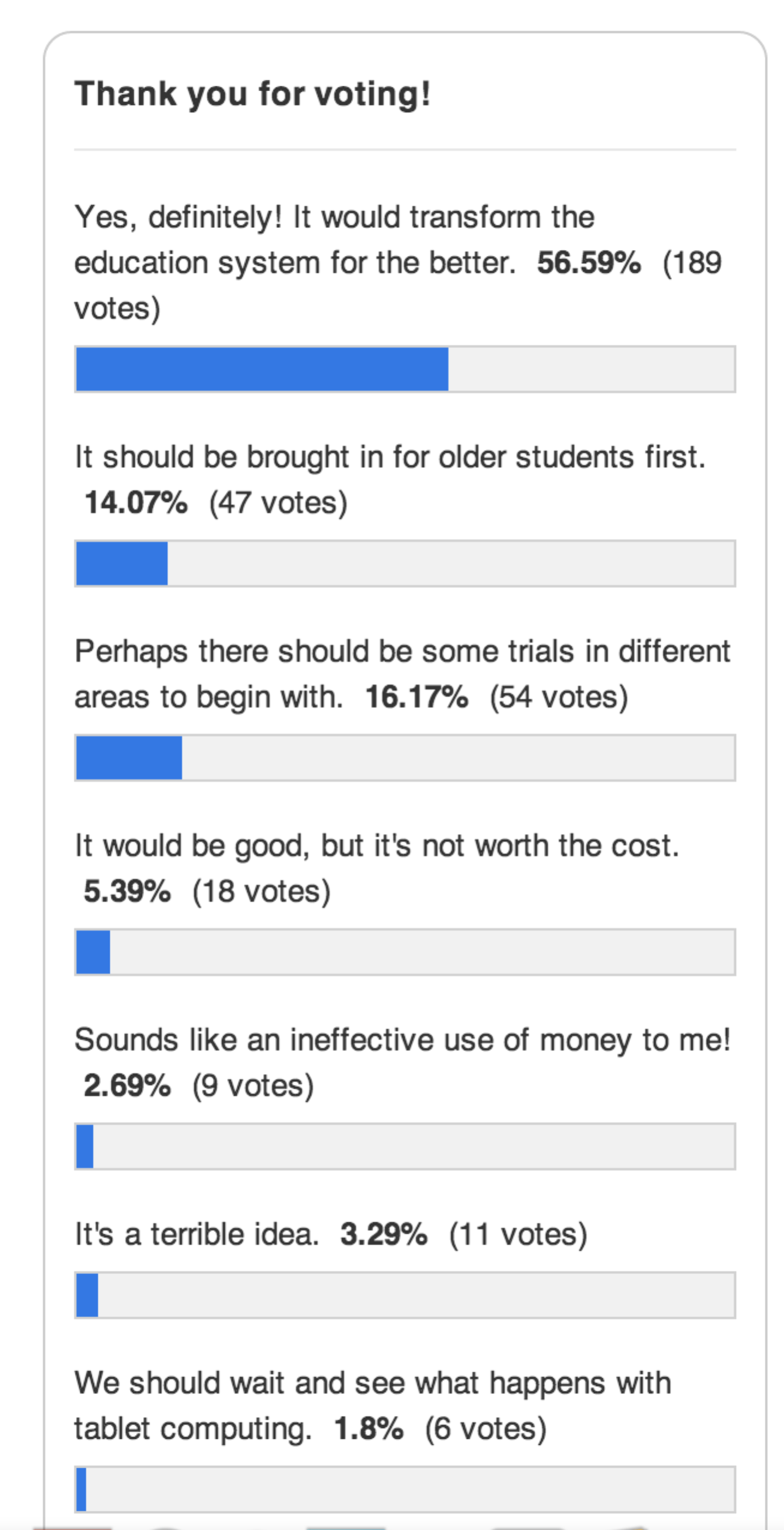 The reason that MaST started with high school was that our mission with the iPad was to create a program that stemmed from students’ already using devices for everyday functions without highlighting exactly what those were. For example, you might have read about iPad programs and wanted to go see how the teacher was integrating the device into the classroom learning environment. Our plan was to put an Apple TV in every room and allow students and teachers to individualize their steps in using the devices. Teachers went through a training on the devices’ capabiliites, and the overarching vision for the classroom was explained to them, and then we observed all of the different interactions. One example was the use of the QR code and the QR app to allow all syllabi and links to be transferred to students in this manner. There was no need to copy down notes: just scan the code and all information would stored to the device. This app saved time and ensured the accurate transfer of information to each student.

When you implement new technologies, there is always the continuous knowledge that they can fail, but we have taken steps to offer teachers support for making their classrooms more interactive. At this point, you can walk into MaST’s high school and see students carrying the devices like notebooks. The ways they are using the devices change from class to class, such as a robotics course in which the iPad’s Facetime application is allowing students in different rooms to collaborate on programming a robot. We will continue to see ways of the past reinvented, but we also know that all of the replication of these practices can be passed on to other organizations and that the engagement level is higher because of the ownership that has been instilled by empowering the students in this process. MaST received a 90 in the PA Performance Profile across their K–12 school last year and has been recognized for excellence among schools in Philadelphia.

John Swoyer is CEO of MaST Charter. He is a former CIO turned CEO who gives his perspective on how technology and innovation create an environment in which kids want to learn and on how he and his staff have led MaST Charter School in Philadelphia to have over 5,700 students on their waiting list in the last three years.