Social entrepreneurs play a critical role in bringing about much-needed solutions for pressing social problems. They are, by nature, ambitious, energetic, innovative, and action-oriented. Their success is critical, not just for their careers, but for society at large. Accordingly, we must do everything we can to equip them with the critical knowledge, skills, and ability to ensure that they succeed. From analyzing the landscape of social entrepreneurship education, we have found that top Master of Business Administration (MBA) and Master of Public Administration (MPA) programs offer different curricula for social entrepreneurship. MBA programs concentrate on ways to leverage market forces to solve social problems, while MPA programs aim to train social entrepreneurs who can bring about multi-sectoral solutions involving the public, nonprofit, and private sectors. We contend that social entrepreneurs need to know how to harness every resource that is available to them, no matter the source, and the curriculum needs to reflect this need.

The need for effective solutions for social problems is great, as many Americans are still reeling from the negative impact of the Great Recession and the vicissitudes of a volatile global economy. Economic inequality is historically high, and most Americans no longer trust that established institutions will bring about necessary changes.1 Opinion polls show that 7 out of 10 Americans think that the country is going down the wrong track.2 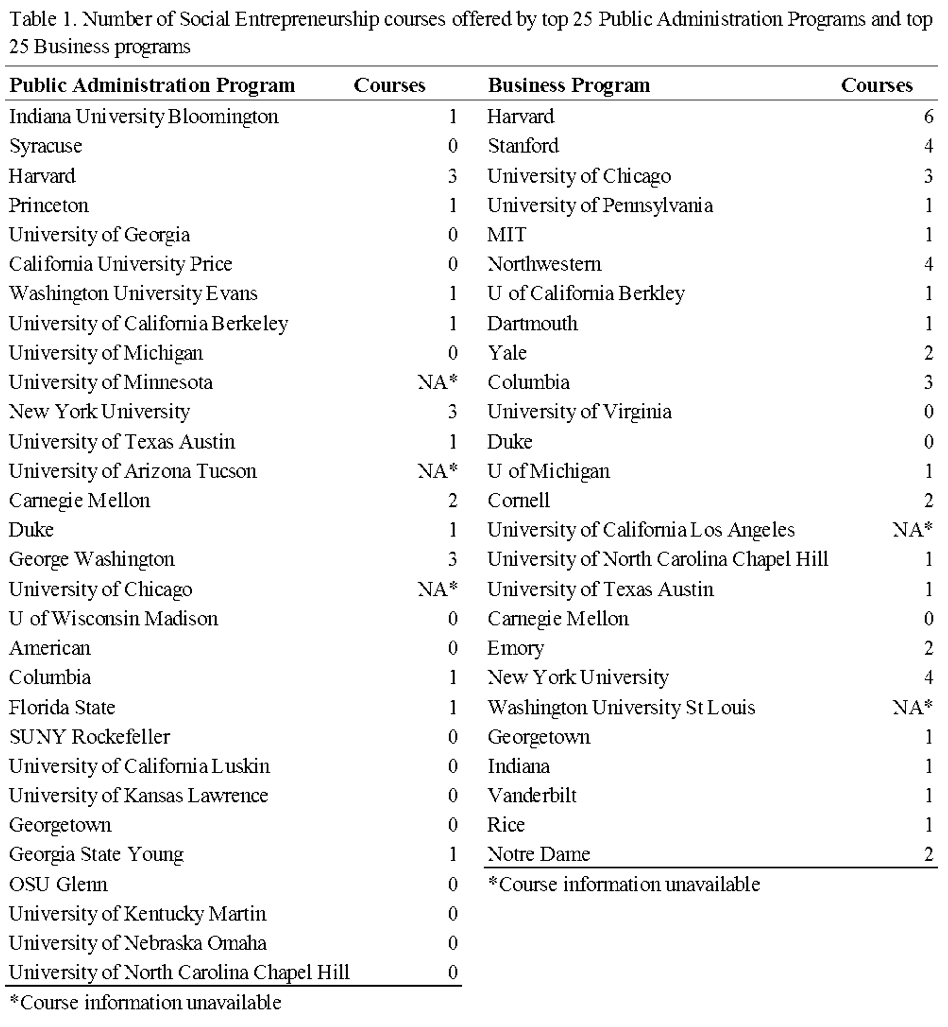 A new period of reform is clearly needed. However, in the current political and economic climate, the public administration reforms that worked in the past are unlikely to be enough to effect change today. The political divide at the federal level has rendered government at all levels paralyzed, while crossing the aisle to pass policy has become harder and ultimately less frequent. The current election cycle is doing nothing to break this trend, and will likely only further exacerbate an already tough situation.3 Moreover, fiscal constraints caused by the government’s heavy debt further prevent action and stifle creativity.4 With resources scarce, public administrators can’t afford to fully fund their current initiatives, let alone expend scarce dollars on new ideas. These realities taken together ultimately mean that government action alone will not be enough. A different kind of reformer is needed, one who seeks solutions across sectors, including public, private and everywhere in between. We contend that this different kind of reformer is, in fact, a social entrepreneur.

A social entrepreneur is an individual who applies market-based solutions to a social problem. Under this definition, a social entrepreneur would operate primarily outside the governmental sphere. She needs to know how to run a business and understand how to calculate social return on investment.

A social entrepreneur is an individual who can craft multi-sector solutions to solve social problems. This definition specifies that the social entrepreneur has a broader depth of knowledge than in the first definition. She must have competencies traditional to both the public and private sectors. She must be a Renaissance Man for the modern age, versed in analysis, policymaking, economics, and management, with a commitment to innovation and results.

In their attempt to define social entrepreneur, Roger L. Martin and Sally Osberg contend that the definition should contain the following three components:

Using these components as a guide, we contend that the second definition is preferable to the first for three key reasons. First, no solution of a social problem can forge a stable equilibrium without public sector support. Enduring social reforms will undoubtedly require changes of some kind to existing government policies and practices. More importantly, having government support ensures that the public sector does not inadvertently impede the reform. Further, despite current fiscal constraints, the government is large. The federal government alone spent 38.1 percent of Gross Domestic Product (GDP) in 2014.7 According to the Bureau of Labor Statistics, the government sector employs some 22,025,000 people, roughly 13.86 percent of the labor force.8

Social entrepreneurs who ignore government are ignoring a significant portion of the labor force already primed to aid this work. Second, solutions that are supported by multiple sectors—public, nonprofit, and private—are more likely to last when compared to solutions from the private sector alone. Having a network of agencies supporting each other protects reforms from dissipating if a single company folds. Public, nonprofit, and private networks also have a better chance of effecting real change if their solutions become law, a process that needs the public sector. Third, many social problems don’t have a purely market-based solution. Social entrepreneurs must have some knowledge of how to operate within the public sphere if they want to accomplish their goals.

The stakes are high. Social entrepreneurs have much work to do across multiple sectors. It is imperative that they are armed with the right collection of skills to ensure that their reforms are effective and lasting. With proper education, these new reformers will be primed to usher in the golden era of the social entrepreneur.

1. Chester A. Newland, “From Trust to Doubt: The Federal Government’s Tough Challenges,” in Public Administration Evolving: From Foundations to the Future, edited by Mary E. Guy and Marilyn M. Rubin (New York: Routledge, 2015).

4. Newland, “From Trust to Doubt: The Federal Government’s Tough Challenges,” 59.

Nelson Lim joined the staff of Fels in August, 2015. Lim is a senior social scientist at RAND and professor of policy analysis at Pardee RAND Graduate School. During the last 15 years he has worked with local and federal government organizations including police and fire departments, the Department of Defense, and the National Security Administration on a wide range of policy issues. He also served as research director for the congressionally mandated Military Leadership Diversity Commission, which conducted a comprehensive assessment of policies that provide opportunities for the promotion and advancement of minority members and women in the Armed Forces. In addition, Lim is leading the development of the National Survey of Victim Service Organization (NSVSO), a national survey conducted by Bureau of Justice Statistics to systematically collect information from victim service providers. He has conducted studies of military recruiting and retention of active-duty as well as reserve components for the U.S. Army and the U.S. Air Force (USAF). He has also conducted research on the most effective diversity practices by Fortune 500 companies, and on barriers to improve diversity among the leadership of various government agencies and corporations, including the National Security Agency, the U.S. Department of Defense, the Army, and USAF. Lim also led studies specifically designed to assist police departments, including the San Diego Police Department and the Los Angeles Police Department, in alleviating recruiting difficulties.

Lim earned his doctorate in sociology at the University of California, Los Angeles. He is known as a student-centered mentor and career advisor, with research interests in social inequality, race/ethnicity, immigration, diversity management, research methodology, quantitative and qualitative methodology, manpower, and personnel analysis.

Samantha Sangenito is a second-year master’s student at the University of Pennsylvania’s Fels Institute of Government. She earned a bachelor’s degree in Arts, Media and Communication from Lafayette College in 2012. Sangenito has worked at a public relations firm for nonprofits in Philadelphia and is currently employed by The ACEs Connection Network, a social network that accelerates the global movement toward recognizing the impact of adverse childhood experiences in shaping adult behavior and health, and accordingly reforming communities and institutions. Her research interests include early childhood education, trauma and resilience, social inequality, and diversity in public management.