The Independence Foundation Fellowships in the Arts is an opportunity for exceptional artists to take a key step forward in their professional development. With these Fellowships, artists have been encouraged to be creative in discovering the best possible way to expand their artistic horizons. There are no set boundaries for what is possible or what types of projects might be funded. Successful projects have been well-designed and of maximum practical value to the artist, and have given the artist an opportunity for artistic growth and improvement in his/her primary area of work, such as assisting the artist in acquiring new skills relevant to his/her work, or providing the artist with a unique developmental opportunity. Fellowship grants have been awarded to originating artists (painters, sculptors, choreographers, playwrights, composers, etc.) and interpretive artists (actors, dancers, musicians, etc.). There are two grant cycles annually, one in the Visual Arts (spring) and one in the Performing Arts (fall).

To be eligible for a Fellowship, an artist must be nominated by an official nominating organization. The nominators are arts organizations who have been grantees of the Independence Foundation. By asking our grantee organizations to submit nominations, we ensure that we receive the best possible candidates for our fellowships. The nominators are organizations with whose work we are familiar and whose judgment we trust in selecting suitable candidates. The nomination process guarantees that at least one of the applicant’s letters of recommendation (three are required: one from the nominating organization, and two from others who know the artist’s work) is from a source known to the Foundation and the peer panelists who review the submissions.

As a result of the nomination process, the quality of the projects under consideration is extremely high and the selection process is very competitive. Peer panels, comprised of local professional artists and arts administrators, review the applications and make recommendation to the Independence Foundation Board of Directors for final decisions. In making selections, the peer panels and the Board of Directors consider the following three factors:

Past Artistic Excellence, as demonstrated by reviews, awards, grants, fellowships and artistic reputation.

Future Artistic Promise, as evaluated from the application, nomination and letters of recommendation.

The Proposed Project, as proposed by the applicant artist in his/her application, with particular emphasis on how this project will allow the artist to take a key step forward in his/her professional development and artistic career.

Since the Independence Foundation Fellowships in the Arts program began 14 years ago, over $1.7 million has been awarded to 240 local visual and performing artists. This incredibly gifted community of performing and visual artists has been given a unique opportunity to grow and flourish in their professions.

Aaron Posner, a theatre director and independent consultant who was instrumental in the initial planning and development of the Fellowship program said “I think it is very bold, very courageous of the Independence Foundation to take this step. Many foundations don’t want to go there. It is riskier, it can be more controversial, there are fewer buffers. This is the front line work of actually helping an artistic community grow and evolve one artist, one project, one step at a time. But it is also enormously exciting, and if the quality of the applicants is any indication, the Foundation is going to be helping some pretty amazing work get done.”

There have been many success stories from the Fellowships. One of the early recipients, Geoff Sobelle (who later went on to win a second Fellowship), began work on the idea for a clowning physical theatre piece based on the great comics from the silent film era. This project evolved into a two-man show, all wear bowlers, that tells the story of two silent film stars who fall off the screen to find themselves trapped in a clown show. It premiered at the 2003 Philadelphia Fringe Festival, then went on to have a full production during the 2005-06 theatre season at 1812 Productions. Since then, all wear bowlers has gone on to have well-received runs all around the country, including New York, Washington, D.C., and San Francisco, and even internationally, in Italy, Germany, London and at the Edinburgh Festival. It was nominated for a Drama Desk Award and received a New York Innovative Theatre Award for “Best Performance Art.” The New York Times wrote, “[I]t’s hard to imagine the kind of daring and ingenuity in all wear bowlers in the commercial theater. It’s one more reason to feel foolish about spending money on a Broadway show…” (Zinoman 2005). 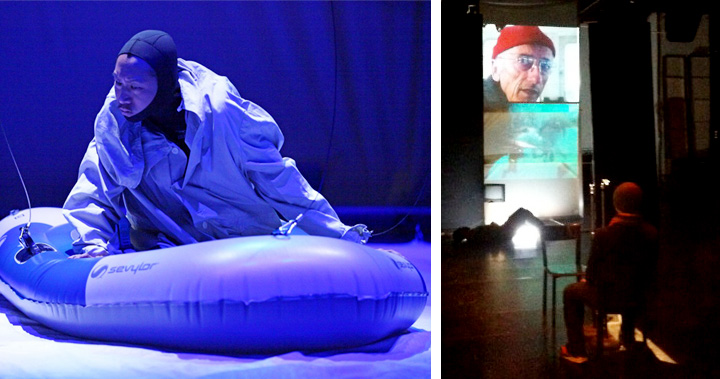 Trey Lyford (left) and Geoff Sobelle in all wear bowlers

Another success story is Sister Helen David Brancato, a Catholic nun in the order of the Immaculate Heart of Mary. Sister Helen was the director of the art program at the Southwest Community Enrichment Center in Philadelphia when she received her Fellowship, which allowed her to take time away from that position to work on her painting. As a result, she was able to have her first public showing, a solo exhibition entitled “Where the Life Is” at the Villanova University Art Gallery. The exhibit was a celebration of people who had surmounted by strength of spirit the poverty of Philadelphia streets, Haiti, and other hard places where Sister Helen had taught art. Since her fellowship, Sister Helen has had more solo exhibitions, her works hang in private collections and museums, including the Museum of Contemporary Religious Art in St. Louis, MO, she has illustrated books such as “Why Not Become Fire?”, and has served as an Associate Professor in the Studio Art Department at Villanova University. Sister Helen has said of her Fellowship, “The Fellowship led me to places I never expected—it enabled me to give voice to so many things I care about and helped me to share these concerns with others. I am forever grateful to an organization that believes in the the power of art and is willing to help struggling artists.”

This region enjoys an extraordinary array of talent, creativity and passion. Through the Fellowships in the Arts, the Independence Foundation is proud to have contributed to the vibrancy of the local arts scene by taking an active role in supporting and providing opportunities to the outstanding individual artists who entertain, enrich and inspire this community.