This photograph is of Barbara (Barbie) Izquierdo’s son, two-years-old at the time Barbie took the photo. As Barbie told an audience of 800 at the Metropolitan Museum of Art in 2009 (http://youtu.be/bTpoPXZWWcU?t=1h15m30s), her son had been in and out of the emergency room in the winter of 2008. He had persistent eye infections because, without heat for the entire winter, his tear ducts would be perpetually clogged. That winter, she struggled to feed her children and herself, and while the two children shared a can of pasta, she would study the pictures on the pizzeria menus she found on her doorstep to ease her own hunger pangs. 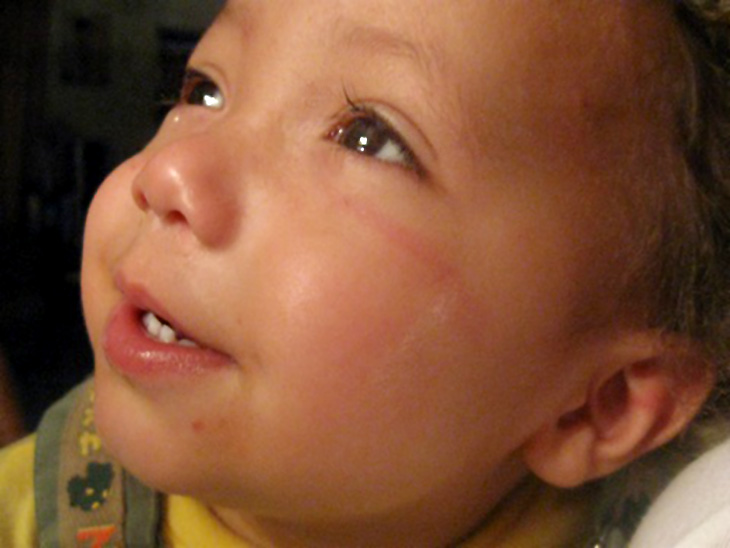 Barbie’s family was experiencing what researchers call “food insecurity,” which is lack of access to enough food for an active and healthy life. In 2010, 48.8 million people in the United States lived in households experiencing food insecurity, and children are more likely to live in households that are food insecure than any other age group (Coleman-Jensen et al. 2011). Most people understand hunger as a moral and ethical issue. We ask ourselves, “Why, in such a wealthy nation, do children go hungry?” Food insecurity is also a major public health problem, as it is associated with a long list of health problems in children and adults. Young children who are food insecure are more likely to be hospitalized, to have iron-deficiency anemia, and to have developmental and behavioral problems (Skalicky et al. 2006; Rose-Jacobs et al. 2008; Cook et al. 2004).

Food insecurity also affects school performance and educational attainment. Children who are food insecure don’t do as well in school, and can have social and behavioral issues that prevent them from learning as well as their peers (Alaimo 2000)(Frongillo, Jyoti, and Jones 2006). It not only affects cognitive function, but also emotional health; adolescents experiencing food insecurity think about committing suicide more than their peers, and parents who are food insecure experience more stress and show higher rates of depressive symptoms (Alaimo, Olson, and Frongillo 2002; Casey et al. 2004).
The pictures in this article, along with other powerful photos and videos, were taken for Witnesses to Hunger (http://www.centerforhungerfreecommunities.org/our-projects/witnesses-hunger), a photography and advocacy project begun in Philadelphia in 2008. The project, hosted by the Center for Hunger-Free Communities at Drexel University School of Public Health, was borne out of frustration that those who understand the pain of food insecurity and hunger firsthand were not included in the development of its solutions. Over 40 mothers in Philadelphia took photographs and videos of their lives and neighborhoods to create an exhibit showcasing their struggles and triumphs and their ideas for change. Some photographs depicted issues of food and hunger directly, such as a photo of a young girl eating a bowl of cereal whose mother asks, “Without [food stamps] what would she have eaten?” Others show violent and neglected neighborhoods, struggles to access work and education, the beauty and resilience of children.

The women of Witnesses to Hunger have expressed themselves as artists in many ways—they are not only photographers, but also videographers, poets, dancers, sculptors and storytellers. Their artwork is a way of connecting to others and sharing their experiences. Witnesses to Hunger is based on a participatory research model called “photovoice,” which was created so that research participants, and not the researchers, can frame the issues most important to their own lives and communities (Wang and Burris 1997; Catalani and Minkler 2010). This project represents the beginning of what we hope is a paradigm shift in the way hunger and poverty are addressed in this country, with those who have personally experienced hunger and poverty leading the drive toward solutions.

Too often, decisions about those struggling with poverty are made by those with no personal experience of being low-income, and without the input of those who have lived in poverty. Those who are low-income in the United States have frequently been left out of the political process, both by circumstance and design (Chilton et al. 2009). Rather than perceiving those who receive assistance like SNAP (formerly food stamps) or TANF (cash assistance) as passive recipients whose lives need to be directed or regulated, Witnesses to Hunger provides parents with the opportunity to speak directly with those who make decisions about such programs. The Witnesses to Hunger exhibit has been displayed at the U.S. Senate in Washington, DC, and at the invitation of Senator Bob Casey, Jr. (D-PA), and at the State Capitol in Harrisburg, PA, and will be shown in the Massachusetts State House in the spring of 2012. It has also been at a variety of educational and public venues across the mid-Atlantic and the northeast. At each exhibition, the mothers who took the photographs have an opportunity to speak, in both intimate meetings with public officials and large public events, about the photographs they have taken, their personal experiences, and their ideas for ending hunger and poverty in the United States.

This project has expanded and received attention from local, national and international media (notably, Witnesses to Hunger is featured in the documentary Finding North, which premiered at the Sundance Film Festival early this year). The overwhelming response from the media, individuals and public officials that we have seen since 2008 leads us to believe that others, too, have felt the absence of the true experts on hunger and poverty from the conversation. Parents from around Pennsylvania, as well as Massachusetts, Rhode Island and Maryland, have joined the cause, and have contributed their photographs and ideas to the traveling exhibit and website. We are creating a model that can be used by groups throughout the country to begin their own photovoice projects as they advocate for change.

The model of Witnesses to Hunger is unique in that it breaks down barriers of class, race and position and works from an understanding of our shared humanity. Witnesses to Hunger is not about “experts” speaking for a voiceless population, it is about creating opportunities for those who have been told time and again that their voices don’t matter to speak out. It is not about outsiders taking photographs of people’s struggles and displaying them to elicit sympathy or raise money for a cause. Some of our friends in the advocacy world have begun using a technique they call “story banking” as an advocacy tool: they ask those affected by the federal anti-poverty programs, or clients of a food pantry, to sit in front of a camera and share their experiences. These stories are then compiled and used by the organization to sway the hearts and minds of political staffers and the public. While we laud efforts that bring people together around a common humanity, Witnesses to Hunger is not about eliciting “stories”—it is about working with people to frame the issues that are most important to them, and ensuring that anti-poverty efforts are lead by those who have the most stake in the discussion.

This project has shown the power of the arts to contribute to a real and nuanced understanding of hunger. Those who view the exhibit often see their own neighborhoods and families reflected in the photographs—for some, this is the first time they are seeing the world with such a lens, for others, the photographs are painfully familiar. These works of art have the potential to profoundly shift the way we see and understand hunger in this country. We might be accustomed to the more sanitized images of hunger: the advertisements for canned food drives, featuring smiling children and abundant donations. In the photos of Witnesses to Hunger, we still see smiling children, but we also see the ugly, violent truth of hunger.
Our first step is to more fully grasp the pain of hunger, as well as the brilliance and dignity of those who suffer through it. Once the country understands this and can relate emotionally, intellectually and humanistically to those who have intimate knowledge of poverty and hunger, they can then recognize that the women of Witnesses to Hunger, and millions like them, are our leaders and partners. With their leadership, we can develop systemic, positively radical policy changes that are not designed to punish and regulate, but rather to treat and prevent hunger.

Jenny Rabinowich, MPH, is Manager and Research Coordinator of the research and advocacy project Witnesses to Hunger at Drexel University School of Public Health. For more information see: http://www.centerforhungerfreecommunities.org.

Barbara Izquierdo has been a member of Witnesses to Hunger since 2008 and has traveled around the country speaking out about her experiences as a single mother raising children on a limited income. She is profiled in the feature-length documentary Finding North, which is slated for release in early 2013.

Mariana Chilton, PhD, MPH, is Associate Professor at Drexel University School of Public Health and Director of the Center for Hunger-Free Communities. Her research focuses on child and household food insecurity among low-income families. She is a Co-Principal Investigator of Children's HealthWatch and founder of the Witnesses to Hunger project.