The Liberate Foundation is a nonprofit entity that has been promoting prevention, treatments, and efficient alternatives to the problem of drug and alcohol use in the city of Bogotá, D.C. After attending to a total of 180 patients during 2015 and 2016, it was evident that there was a need to review the prevention programs that were being carried out in the city of Bogotá because we found out that patients were even more younger than expected, as we had boys and girls between 10 and 12 years of age.

Suba is one of the largest territories in Bogotá with an approximate population of 1.2million200,000 of which 245,000 are school-age (Bogota Mayoralty, 2015) which emphasized the relevance of working with this population group.

Problems of micro-trafficking, early consumption, and unfavorable social environments, become a propitious scenario for the different links of the drug problem to take force and negatively impact the social context of the locality and the city. The intervention on this phenomenon has many perspectives and requires a coordinated work between public and private sectors. Being conscious of this, the initiative of the Foundation consisted in focusing on the most vulnerable actor, which were young people of school age, between 10 and 17 years old.

How to link this population to a drug prevention program was a challenge, since most programs used old training methods, where there was no high level of appropriation of contents and, students did not identify themselves with what was shown in lectures and workshops.

Through a game and play in group dynamics, we provide elements that could achieve greater impact and empowerment by young people. To put into a board game, the challenges they face daily, in their family contexts and in their neighborhoods and provide them with solutions on how to act and decide, was an innovative alternative approach in terms of prevention of consumption of drugs and alcohol. The game became the bridge that was needed to be able to unite the message with the desired answers and actions from children and adolescents.

Therefore, the problem we needed to focus on was finding a solution to the addiction of drugs and alcohol from people in a very young age in the location of Suba.

The alternative that materialized was the game called “I Dare You: Think, Act, and Liberate,” which consists of the following:

To find in a didactic way that young people understand the importance of developing decision-making, problem solving and identifying, and analyzing and interpreting influences from the media through poker-type letters with different questions of situations that they are presented within everyday life, counted with chips for each person, and a pair of dice.

The following is a general description of how each of these components is addressed. 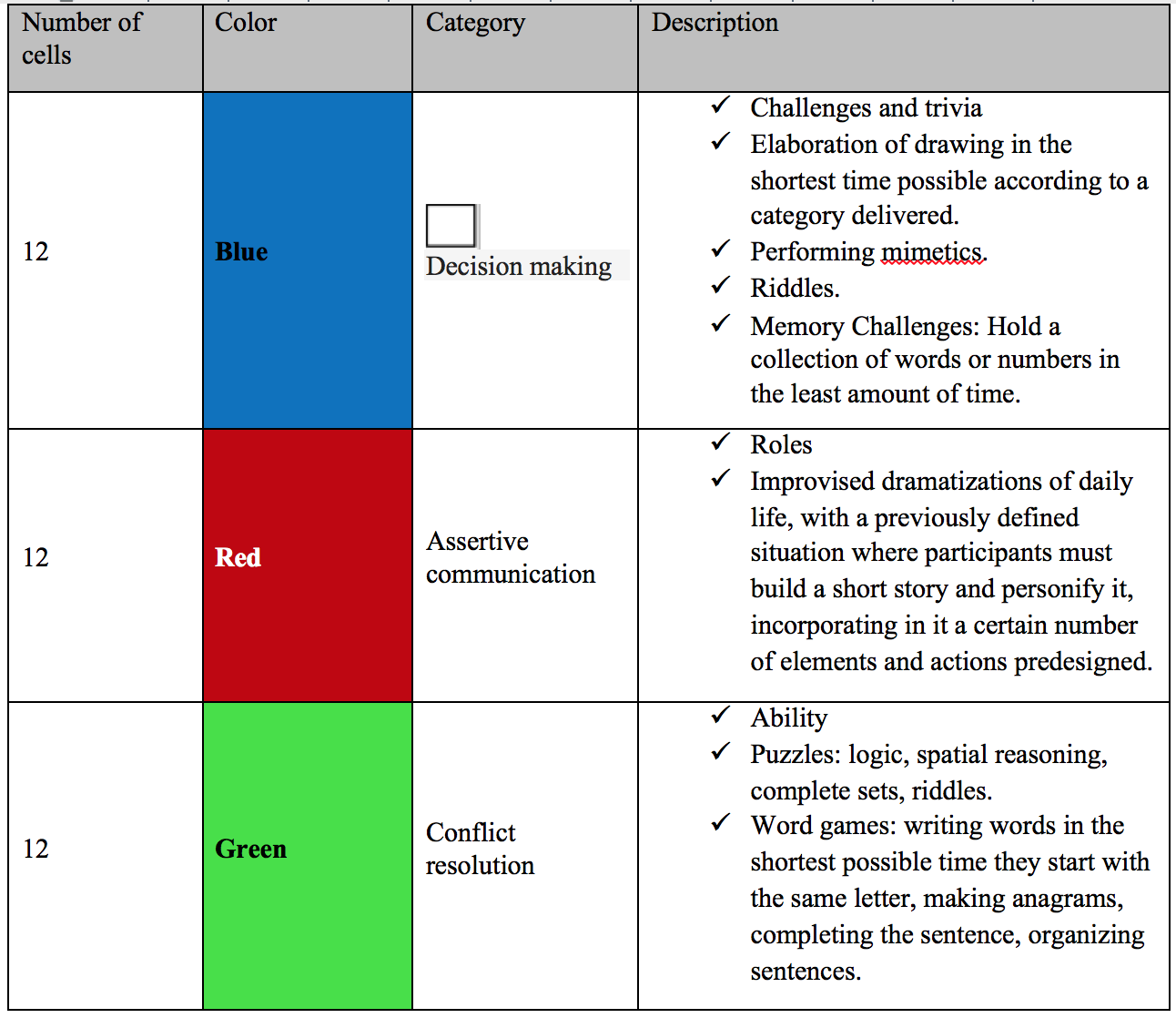 As for its therapeutic validation, the game is based on the universal prevention approach, strengthening the general population, attitudes and behaviors that integrate the lifestyle of the individual and his social group, reducing vulnerability to risk through the strengthening of the protection factors, understood as the abilities that help reduce or mitigate the effects of risk, especially in relation to the individual, the peer group, the family, and social environment. In this way, the strategy used in the game is oriented to the school population by promoting health, creating knowledge, and strengthening attitudes from: raising awareness of the population to increase the perception of the risk of tobacco use, alcohol and other drugs, by emphasizing their knowledge and strengthening protection factors. Universal prevention programs targeting children and adolescents should be geared to the development of personal and social skills, offering the opportunity to develop these skills in a safe and healthy way to be able to cope with difficult situations in daily life. The social innovation of this initiative is to link in an efficient way the therapeutic elements of prevention in the consumption, in dynamics based on the game, where the student learns while playing, to developing factors of protection that they can replicate in a social context.

The game and Liberate Foundation were both rewarded with the 2016 Social Value Award given by the CEPSA Foundation for promoting social development in the community of Suba.

As a result of this, we decided to make an alliance with the Ronda Factory Company, who is an expert in designing and printing games, which enabled us to promote the game and its use to 2000 students, teachers, counselors of ten public schools in Suba (locality of Bogotá) representing more than 2.000 young people. The goal was to ask school directives to include the game as part of a permanent prevention program in their schools.

The results are promising, and demonstrate the importance of not giving up in any effort to prevent children from reaching the stages of early abuse, and subsequent addiction.

The coverage indicators show that it is necessary to continue strengthening the work articulated with schools, but especially with the local, district, and national government, with the aim of obtaining more support that would means a greater expansion and permanence of the program in the locality, and hopefully at the city and country level. Therefore, the Liberate Foundation and its work team will continue to look for scenarios where this initiative can gain support, feedback, and the ability to replicate this initiative, which contributes to the construction of social development and provides people with tools to decide and act assertively, thereby reducing usage rates. We hope to continue to promote the game, increase interest in the education sector, government, and cooperation agencies, that want to bet on prevention at an early age as the main proponent of change in addressing the problem of drugs in our country.