Like many other counties in Pennsylvania and around the country, Bucks County has experienced a significant increase in opiate drug use among its population. In 2008, the Children and Youth Social Services Department for the County began mapping the effect of this increased trend, which frequently characterized new reports for investigations of child abuse/neglect. Realizing the benefit to families and the agency, in 2015 Bucks County Children and Youth partnered with Penn Foundation, a substance abuse treatment provider, to embed a Mobile Engagement Specialist on the Children and Youth team. This partnership fostered immediate access to treatment to help keep families intact.

Briana, 28, has been using drugs since she was 12 years old, starting with prescribed pain medication and moving onto heroin and cocaine. She is a single mom of three boys -- ages 12, 9, and 7. She has another son who passed away at two-weeks-old due to health complications resulting from Briana’s drug use while she was pregnant. Two years ago, she lost custody of her three surviving sons as a result of her drug addiction. Stuck in a repetitive cycle of drugs, jail, and rehab, Briana felt hopeless and resistant to treatment. But thanks to an innovative partnership between Bucks County Children and Youth (in Southeast Pennsylvania) and Penn Foundation, a substance abuse treatment provider in upper Bucks County, Briana is on a path to recovery and to hopefully getting her children back.

Like many counties in Pennsylvania and around the country, Bucks County began to experience a significant increase in opiate drug use among its population. In 2008, the Children and Youth Social Services Department for the county began mapping the effect of this increased trend, which frequently characterized new reports for investigations of child abuse/neglect.

The County agency measured the rate of out-of-home placements for children, ages newborn to 17 years, that could be linked to referral and/or court filing documentation describing caretaker substance use as a significant factor requiring out-of-home placement. In the agency’s 2011/2012 Annual Report, the Bucks County Drug and Alcohol Commission reported that treatment admissions had risen by 10 percent for individuals in the 25-34 age range. Meanwhile, in the same fiscal year, the Children and Youth Agency noted that 38 percent of all children placed in out of the home were placed out-of-home due to caretaker substance use. Of that group, 53 percent of the placements were of children ages newborn to five years.

Bucks County Children and Youth was also receiving an increased number of referrals for newborns diagnosed with substance exposure at birth per the requirements of hospitals to report babies that fall under the criteria mandated in the Child Abuse Prevention and Treatment Act (CAPTA). 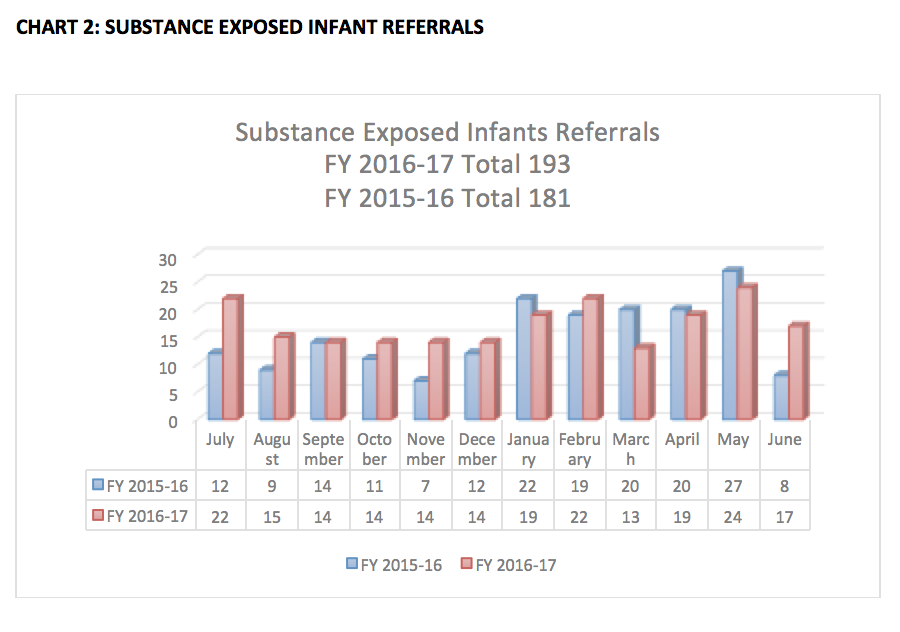 Child welfare caseworkers are highly trained to work with the diverse cross section of individuals and families who are referred for services. However, the multidimensional issues of servicing a growing population with the primary presentation of serious substance abuse presented new challenges that ranged from interviewing, accurate assessment, family engagement, treatment resources, and frequent court involvement. Bucks County Children and Youth felt that it would be of great benefit to have a drug and alcohol specialist as part of the child welfare department. This person would understand complexities of child abuse/neglect and familial needs and could engage clients and staff alike toward earlier treatment and mitigated child welfare involvement.

Pennsylvania’s Medicaid program, Health Choices, gives counties the option to contract directly with a behavioral health managed care organization for its Medicaid recipients in need of behavioral health services. Bucks County’s Behavioral Health Department oversees the contract, and the Bucks County Drug and Alcohol Commission, the single county authority, works closely with Behavioral Health to best direct utilization of funds received by the county for the treatment needs of individuals with a substance use disorder. In partnership with both of those departments, the Children and Youth Agency was able to pilot this concept for a year in 2012, utilizing a professional from the Drug and Alcohol Commission.

In the fall of 2015, funded by the Health Choices Medicaid program and in partnership with a private provider, Penn Foundation, a full-time Mobile Engagement Specialist (MES), Pamela Blackburn, was assigned to work side-by-side with Children and Youth caseworkers in the homes of clients served by the agency. This collaboration aimed to reduce out-of-home placements for children ages newborn to five by five percent, reduce the number of Children and Youth cases opened by five percent, and eliminate the wait time for a drug and alcohol assessment, allowing quicker access to treatment.

“With an embedded Mobile Engagement Specialist as part of our team, the individual struggling with addiction is able to receive immediate outreach and support with getting into treatment, thereby reducing the likelihood of the case being opened and out-of-home placement being necessary,” says Lynne Rainey, LSW, Director of Bucks County Children and Youth.

“Providing early intervention to individuals with substance abuse issues is important to the prevention of more serious substance abuse (and other) issues down the road,” says Gordon Hornig, MSW, LSW, Director of Mobile Engagement Services at Penn Foundation. “And research has shown that family involvement in intervention and treatment increases the likelihood of the individuals achieving and maintaining recovery.”

Almost immediately in 2015, Children and Youth began directing new referrals of newborns with neonatal abstinence withdrawal (addicted at birth) to the MES. The number of referrals accepted by Blackburn easily surpassed expectations of a reasonable caseload. In 2016, a second MES, Tony Pierce, was assigned to Children and Youth. Blackburn and Pierce currently have a combined total of 70 clients, with approximately 73 percent of them having gotten a drug and alcohol evaluation.

Blackburn continues to work primarily with CAPTA babies, using evidence-based strategies like “Stages of Change” and “Motivational Interviewing” to engage new moms and dads into treatment, giving the babies and parents an opportunity to be a family. Placement rates of newborns, while still frequent, are mitigated using family intervention methodologies such as “Family Group Decision Making” and an evidence-based in-home education series, “Family Strengthening,” with the new parents, extended family members, and a MES worker.

“Many of my clients are first-time parents who don’t know where to go for help. I help the moms to start on a path to recovery while they are pregnant, and I am there to support them and their families after they give birth. Many of these babies are born addicted and go through withdrawal; I am there to help the parents get through that difficult process,” says Blackburn.

“Pam Never Gave Up on Me”

Losing custody of her children wasn’t motivation enough for Briana to get clean. In fact, it spurred her addiction even more. But when Bucks County Children and Youth put her in contact with Blackburn, Briana says, “This connection changed everything. Pam never gave up on me. She always asked me what I needed and how she could help.”

In June of this year, Briana overdosed, but because of her close relationship with Pam, Briana reached out to her, and Pam arrived within 15 minutes to take Briana for an assessment and to get her into treatment. Briana was admitted to Penn Foundation’s inpatient rehab program, which she completed in July. She now lives in a recovery house and continues with outpatient treatment.

“I don’t know what I would do without Pam,” says Briana. “I needed someone like her, someone that was there for me, that I could be completely honest with, without judgment, that would help me stay in treatment, and that would not let me take the easy way out. Pam made me realize that my children are worth my daily struggle to stay clean. They are so worth it.”

Lynne Kallus-Rainey, MSW, LSW is the Executive Director of the Bucks County Children and Youth Social Services Agency and has worked in the field of public child welfare for 38 years. She attained her Master’s Degree in Social Work Administration at Temple University. She is a member of the Executive Board for the Pennsylvania Children and Youth Administrators Association.

Gordon Hornig, MSW, LSW has worked at Penn Foundation for more than 20 years and is the Director of Mobile Engagement Services, a program that connects individuals to substance abuse treatment services and assists families in learning how to properly respond to addiction. He earned his Master’s degree in Social Work from Marywood University. Gordon also has over six years of teaching experience at the college level with positions at Marywood University, Temple University, and DeSales University.