In September 2000, William J. Neff, Sr., an 83-year-old man with Alzheimer's Disease, residing at a local Bucks County personal care home, died as a result of five broken ribs and a punctured lung. In 2003, a health care provider at the facility was charged with murder and neglect of a care-dependent person. In addition, the administrator of the facility, the director of nursing, a resident assistant, and a hospice nurse were criminally charged.

In response to this crime, the Bucks County Crimes Against Older Adults Task Force was initiated to focus on preventing future incidents like the William J. Neff murder. The Task Force began in 2003 in response to a need to coordinate efforts of multiple agencies that were working to assist at-risk seniors in Bucks County. Participating agencies saw a need to develop intra-agency participation to more efficiently assist elder victims. The Bucks County District Attorney’s Office, Bucks County Area Agency on Aging, Consumer Protection of Bucks County, Bucks County Network of Victim Assistance, A Woman’s Place (domestic violence shelter), Bucks County Register of Wills and others began meeting monthly to review, investigate, and prosecute crimes committed against older adults in Bucks County. The Task Force began to focus on ways to prevent crimes through professional and community education; and to increase awareness of available resources for services. Since the initiation of the Task Force, other interested Agencies including financial professionals, law enforcement professionals, elder facility providers, home care agencies, and others have also participated. 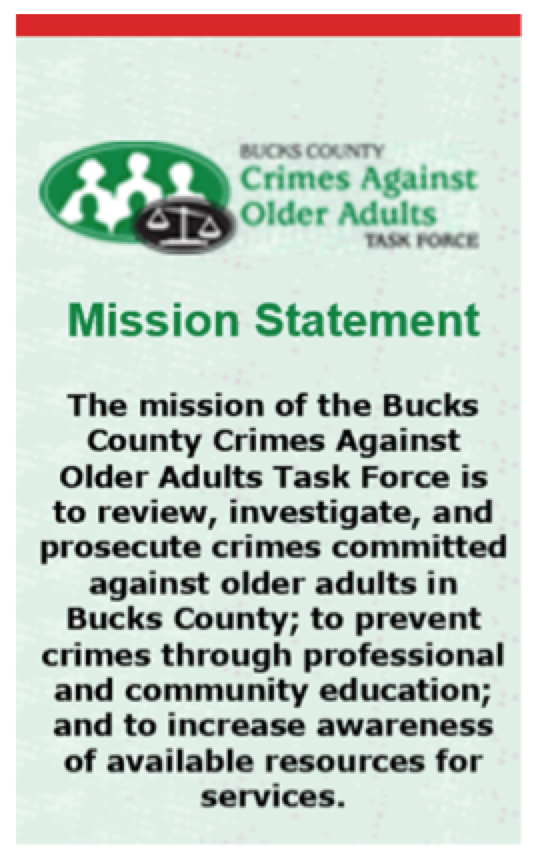 When Task Force members share information regarding individual cases, they often find that input from the participating members helps to identify the best path to pursue in an elder abuse investigation. Although prosecution of perpetrators of elder abuse, neglect, exploitation, or abandonment is a primary goal of the Task Force, many elder victims and their families are helped through social service interventions.  Task force efforts have led to several convictions but have also frequently led to the improvement of the quality of life of seniors in and around Bucks County.

Monthly “Fraud Alerts” are provided as one of the services of the Task Force. These alerts are forwarded to individuals and agencies throughout the Southeast portion of Pennsylvania. The “Fraud Alerts” feature information and preventive tips to help stop scammers. Currently, several thousand people receive this information regularly.

As part of its education and prevention efforts, the Crimes Against Older Adults Task Force also produces a high-quality day long training program, the William J. Neff Sr. Symposium on the Prevention of Crimes Against Older Adults, that addresses elder abuse issues. The impetus and name for this annual training day were the high-profile William J. Neff elder abuse case in Bucks County.

Begun in 2004, this annual symposium brings together approximately 300 social workers, nurses, health care providers, and members of law enforcement to provide education, heighten awareness, and facilitate communication about crimes against older adults. The symposium usually features a different theme each year, a nationally known keynote speaker, and multiple workshops. This year, the keynote presenter was Laura Mosqueda, M. D., who is a Professor of family Medicine and Geriatrics at Keck School of Medicine at the University of Southern California and Professor of Gerontology at the USC Leonard Davis School of Gerontology. Dr. Mosqueda gave an informative presentation about the aging brain and dementia. The presentation also included the Abuse Intervention/Prevention Model (AIM), which is a practical framework to identify older adults who may be at a higher risk of being abused. There were also multiple workshops during the symposium that offered additional opportunities for learning about various facets of elder abuse and its prevention. The Neff Symposium has been accredited by the Pennsylvania Department of Aging for annual credits required of Older Adult Protective Services staff.

Although the Neff Symposium and other projects of the Crimes Against Older Adults Task Force have been very successful, the members realize that the work of the Task Force is never done. There is a hope that this group will remain an effective force in combating abuse, neglect, exploitation, and abandonment of older adults in the Bucks County area.

The creation of similar Task Forces across Pennsylvania and the nation is strongly recommended by the Pennsylvania Department of Aging, the Pennsylvania Supreme Court’s “Elder Justice in the Courts” Advisory Council (whose Madame Justice Todd recently wrote to all of Pennsylvania’s president judges, district attorneys, county commissioners, and Area Agencies on Aging encouraging task force development), and by the National Adult Protective Services Association.

The creation of local or regional Task Forces to address elder abuse prevention and prosecution is highly recommended by Elder Abuse and Legal Professionals. In Bucks County, multiple agencies have collaborated to create the Bucks County Crimes Against Older Adults Task Force, which has been instrumental in providing prevention education, consultation, and prosecution regarding elder abuse.

Lois Tobin, MSW, LSW, is Deputy Director at the Bucks County Area Agency on Aging (BCAAA), responsible for the Long-Term Care unit which includes the Protective Services division among others. She also worked as an independent consultant. She is a member of the National Association of Social Workers, and Bucks County Women’s Advocacy Coalition.  BCAAA is a member of the National Adult Protective Services Association.