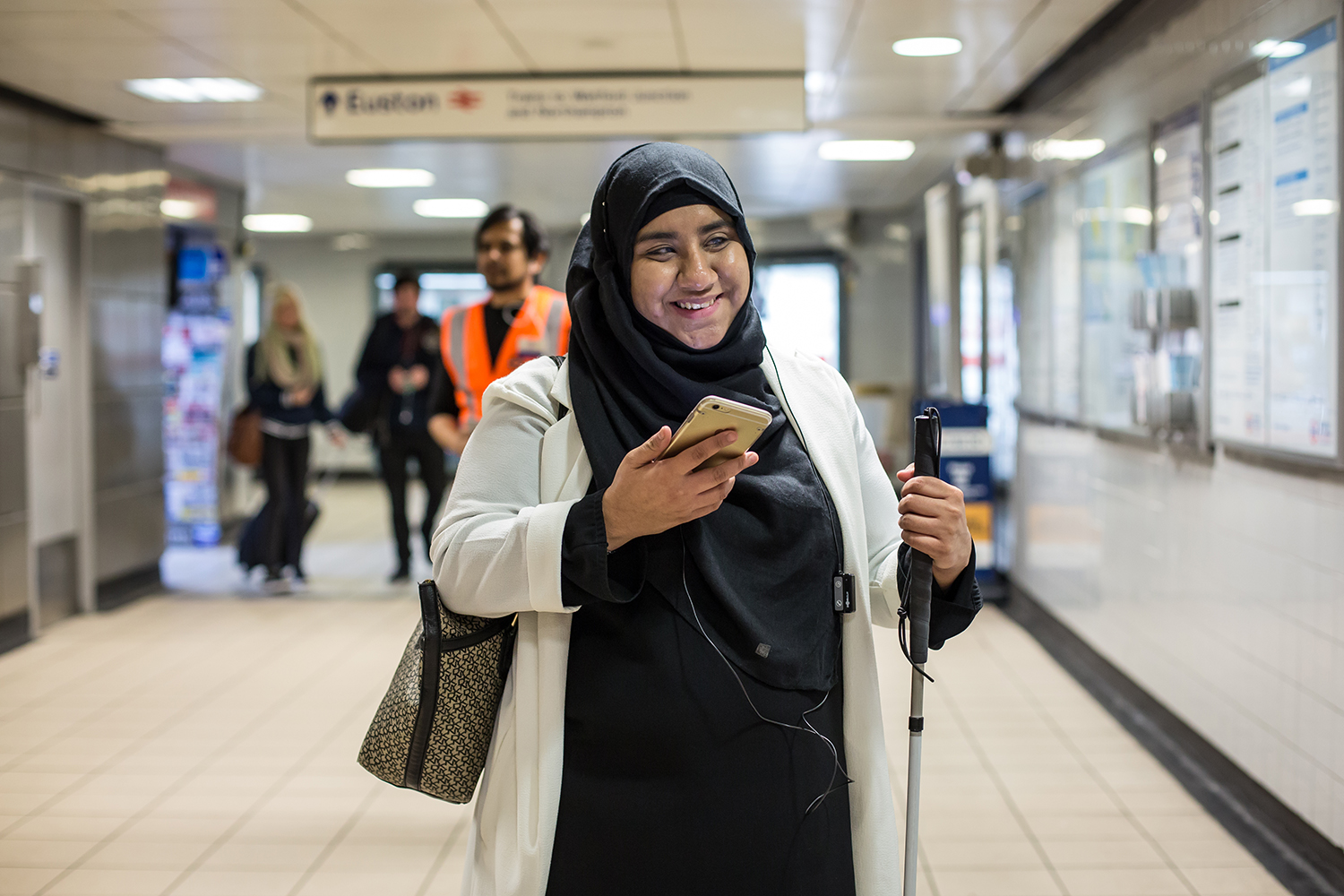 Blind and vision impaired people face significant challenges to independent navigation, one of the main factors making them more likely to face poverty, unemployment, and social isolation. Wayfindr, a joint venture between the Royal Society for Blind Children and UsTwo has created the world’s first internationally-recognized standard for accessible audio navigation aiming to help the world’s 285 million vision impaired people navigate the world independently. Wayfindr shows how nonprofits can promote the use of emerging technologies for social innovations and deliver for end users at scale without having to engage in expensive and resource-consuming development of proprietary technology.

Around the world today there are 285 million blind or vision impaired (VI) people. This number is likely to increase as the world’s population ages, with some studies suggesting that the number of blind people could triple between now and 2050. Vision impaired people are more likely to live in poverty, suffer from social isolation, and be unemployed. One of the key reasons behind this is that it is very difficult for them to travel independently due to the difficulty of navigating in unfamiliar or complex environments. Additionally, inconsistent accessibility offerings from public transportation providers make spontaneous or even planned travel difficult. These factors lead to blind and vision impaired people choosing to leave their house less frequently, and only traveling to places they are familiar with. In the UK, 54 percent of blind people would like to leave their house more than they currently do. Globally, there are millions of VI people whose life choices and opportunities are limited by not being able to travel independently. Wayfindr, a joint venture between the Royal Society for Blind Children (RSBC) and UsTwo, was set up in 2015 to address this challenge. Members of RSBC’s Youth Forum flagged difficulties accessing public transportation as a major obstacle in their lives and asked if smartphone-based technology could provide a solution.

From the assorted options considered, one solution stood out as the most promising. Audio wayfinding technology has the potential to open up so much more of the world to VI people by enabling independent and spontaneous travel. It can be provided to users using smartphones and headphones, items already owned and used by most people, meaning there are few or no additional costs to users to take advantage of the solution. Using a smartphone app, VI people can receive turn-by-turn audio instructions to guide them around indoor environments and give them information on points of interest, such as helpdesks. In these indoor environments, a standard GPS system is often not accurate enough, or cannot provide enough information, such as the location of escalators, ticket barriers, or the specific platform from which a train is departing for a VI user to travel independently.

Following a successful trial of a prototype solution involving Bluetooth Low-Energy (BLE) beacons, smartphones, and a corresponding app at a London Underground station, Wayfindr concluded that the greatest possible impact lay in the creation of a standardized set of instructions for venue owners and app developers to set up an inclusive and accessible audio-based navigation system. In order to build confidence in the technology, VI people need a level of consistency across every navigation app that they use. Standardized instructions deliver this reliable, consistent, and seamless experience, as well as maximizing the potential reach of audio wayfinding and giving VI users a choice of apps to use. Audio wayfinding is designed as a complementary mobility aid and not to replace a primary mobility aid, such as a long cane or guide dog.

This led to the creation of the Wayfindr Open Standard. The Open Standard gives venue owners and digital navigation services the tools to implement high quality, consistent, audio wayfinding solutions. It has been developed through user research with VI people during trials in London with Transport for London on the Underground and in University College London, and in Sydney with Sydney Trains, as well as in Oslo. The Wayfindr Community, a group of indoor mapping companies, academics, vision impairment charities, software developers, and adopters has also fed into the Open Standard’s development. The standard has been adopted by the International Telecommunications Union (ITU), meaning it is recognized in 193 countries across the world. This represents a significant endorsement of the quality of Wayfindr’s work in creating the Open Standard. The standard is technology-neutral and free to use.

From a social impact perspective, the development of a standard as opposed to attempting to develop a solution based on proprietary technology has several advantages. Its user-centered design, as well as trials and academic research, ensure that end users will take advantage of it when possible. It also gives adopters confidence when implementing an audio wayfinding system. The standard can be added to existing navigation apps or venue-specific apps, such as for a shopping center or airport, avoiding unnecessary duplication. Additionally, as more and more venues provide audio wayfinding, more data and feedback is provided for future iterations of the standard, ensuring that VI users benefit from an ever-improving experience, and adopters receive more and more guidance.

By virtue of being technology neutral and free to use, the standard is highly scalable, particularly in comparison to developing and promoting a proprietary navigation app. It is hoped that this approach will lead to the widest possible adoption of audio navigation, thus maximising its transformative potential for blind and VI people.

While Wayfindr has focused on vision impairment, audio wayfinding could equally be used by people suffering from dementia-type impairments or print disabilities, as well as those who are unable to read signage in a local language, increasing its potential from a social impact and commercial perspective.

Wayfindr’s award-winning work to date has been made possible through philanthropic fundraising, including a one-million-dollar grant from Google.org to develop the Open Standard. In the medium-to-long term, the organization plans to achieve sustainability through revenue from a compliance checking system and training courses for access consultants, amongst other sources.

Following the successful development and approval of the standard, Wayfindr is now working to encourage the implementation of audio wayfinding solutions and moving towards the organization’s end goal of helping the global community of 285 million blind people to navigate indoor environments independently.

Tiernan is the Head of Public Affairs and Standard at Wayfindr. Before joining Wayfindr, Tiernan spent several years in Brussels working in communications and public affairs in the field of technology policy, including standards in the areas of cloud computing and cybersecurity. He has also worked on policy development for a large UK business advocacy organization.