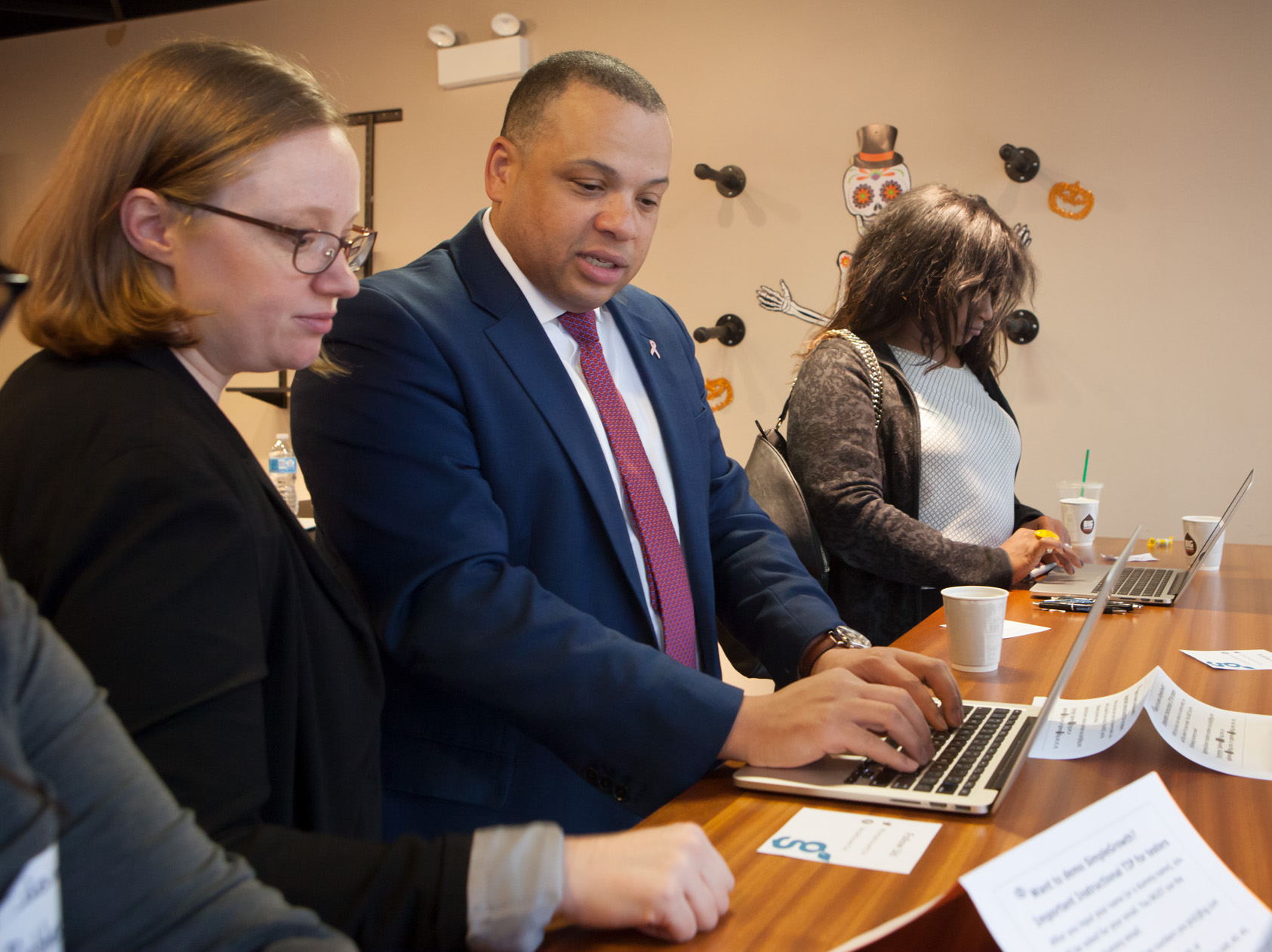 Minority entrepreneurship is blossoming in Cook County, but the support systems that normally accompany business growth -- like loans -- haven’t followed.

As of 2014, Cook County was home to 110,155 registered African-American businesses, which was the most of any county in the United States, and the number of minority-owned businesses in the county grew by 30 percent from 2007 to 2012. Yet, Chicago’s minority entrepreneurs struggle to access the capital they need to grow their businesses. In fact, according to the People for Change Coalition, African-American businesses received just 2.3 percent of Small Business Administration loans in 2013, down from 11 percent in 2008.

Women’s entrepreneurship is also on the rise in Chicago, but these business owners face similar difficulty obtaining loans. A study released by American Express found the number of women-owned businesses in Chicago grew by a whopping 41.8 percent from 2002 to 2015. What’s more, the National Women’s Business Council (NWBC) said between 2002 and 2012, the number of women-owned firms nationwide increased by 52 percent, which was more than double the national average. At the same time, NWBC said, women started their businesses with only about $75,000 in capital, while their male counterparts started their firms with an average of $135,000.

In light of these facts, Small Business Majority, a nonprofit founded in 2005 by entrepreneurs for entrepreneurs with a nationwide network of 55,000 small business owners and offices in Chicago and throughout the country, recognized a clear problem in Cook County: women and minorities are starting businesses at high rates, but they aren’t getting the support they need from either a capital or educational standpoint. So Small Business Majority recently launched SimpleGrowth to boost Chicagoland entrepreneurship and close the lending gap in underserved communities in two ways: by making it easier to access responsible capital and helping businesses find the educational resources they need to succeed.

SimpleGrowth connects entrepreneurs to local business assistance organizations that can provide free advice and tools like business planning, financial literacy, marketing, and licensing. All local business centers participating in this initiative, such as Chicago Urban League Center for Entrepreneurship and Innovation, Women’s Business Development Center, Bethel New Life, and Sunshine Enterprises, show a strong commitment to their communities, are action-oriented, and are responsive to the needs of both aspiring and established entrepreneurs and serve everyone.

These specific organizations were selected because Small Business Majority is committed to choosing SimpleGrowth partners that are based in the Chicagoland community and invest in a diverse, full-time staff made up of individuals from both inside and outside the community. What’s more, at least half of a SimpleGrowth partner’s staff should consist of a mix of current and former small business owners who continue to engage with entrepreneurs and help drive partner programs.

Additionally, Small Business Majority’s Chicago staff frequently offer free educational workshops with a focus on serving women and entrepreneurs of color, as well as aspiring business owners. These events include networking opportunities, interactive presentations, and discussions with experts as well as local business owners, and presentations on the resources available through SimpleGrowth.

The other primary component of SimpleGrowth is its free loan application. With the support of Chicago City Treasurer Kurt A. Summers, Small Business Majority, Fundera, and Accion last year launched an online tool that helps match Chicago’s underserved small businesses with responsible lenders that are committed to helping small businesses succeed. All lending institutions offering loans through SimpleGrowth have mission-driven goals to support small business owners in their communities, and include Accion, Local Initiatives Support Corporation Small Business and the WBDC. SimpleGrowth is easy to use and offers unbiased comparisons of lending options. So easy, in fact, that business owners can receive approval for financing from $500 to $500,000 in less than 48 hours.

Here is how it works: Using what is essentially similar to an airline fare-finding website for small business loans, entrepreneurs looking for funding enter fairly basic information including how much money they want, what they plan to do with the money, how much revenue they have, how long they’ve been in business, and what their credit score is. If qualified, the user is then matched with SimpleGrowth-approved lenders. If the user doesn’t yet qualify for a loan, they are then referred to SimpleGrowth’s partnering business assistance organizations that can help them become loan ready. And unlike many lenders, SimpleGrowth partners are happy to meet face-to-face with business owners in order to walk them through the process -- whether or not an applicant ultimately receives a loan.

Although SimpleGrowth only launched in October, it is already making a difference for Chicago entrepreneurs. For example, loans went to a ballet studio owned by Madame Elizabeth Boitsov, a Russian immigrant who is passionate about bringing the arts to Chicago’s South Side. Madame Boitsov has taught ballet locally since 1980, but in recent years was only able to offer classes part-time. Thanks to SimpleGrowth, the Greater Southwest Development Corporation, which is another SimpleGrowth partner, and Accion, she received two $5,000 loans and is now operating full time in a new studio space near Midway Airport.

A tool like SimpleGrowth is needed because capital has become increasingly difficult to come by for all small businesses, particularly over the last decade. In the aftermath of the Great Recession, traditional banks are increasingly reluctant to make loans to small firms. The recession may have ended almost a decade ago, but even today about 80 percent of small business loan applicants are rejected, up from 60 percent in 2007. What’s more, small business loans have fallen from about half of total bank loans in the United States to under 30 percent of the total. As a result, new alternative and online lending opportunities have sprung up to fill this market need, which could be a positive development for small businesses if not for the fact that alternative sources of financing operate in an almost entirely unregulated market -- making many small business owners vulnerable to predatory practices like extremely high interest rates.

SimpleGrowth is also addressing these predatory lending concerns by working with nonprofit lenders that have a proven track record in their community and work to put the entrepreneur’s needs first. These lenders also strive to offer products with transparent rates, no hidden fees and clear terms.

Chicago is at the forefront of urban entrepreneurial activity in the United States, but the local infrastructure hasn’t yet caught up with business growth -- particularly for women and minorities. As a result, Small Business Majority and its partners are working to remedy this problem in the hope that the city can serve as a blueprint for small business success in this country.

Geraldine Sanchez Aglipay manages Small Business Majority's outreach, education, and policy efforts in the Midwest region and Greater Chicago to enhance financial capacity and health security for small business owners, their employees and their families. She also manages Small Business Majority’s national outreach to women entrepreneurs and women's business organizations. As a former solo-entrepreneur, Geri is passionate about helping entrepreneurs strengthen their asset building and building an inclusive economy that works for all through entrepreneurship, especially for women, communities of color, and the underserved.

Prior to joining Small Business Majority, Geri worked with the Asian Health Coalition and GetCoveredIllinois.gov to help roll out the Affordable Care Act in underserved areas and managed the national Health Resources and Services Administration’s Public Health Training Center Network under the U.S. Department of Health and Human Services. She has extensive professional and volunteer experience on minority issues, especially in the arena of public health, civil rights, and civic affairs, having served on boards such as the American Public Health Association's Asian Pacific Islander Caucus. Geri was selected to the Cultivate: Women of Color Leadership Program, which aims to strengthen women leaders of color in Chicago working to advance economic, social, and racial justice issues.