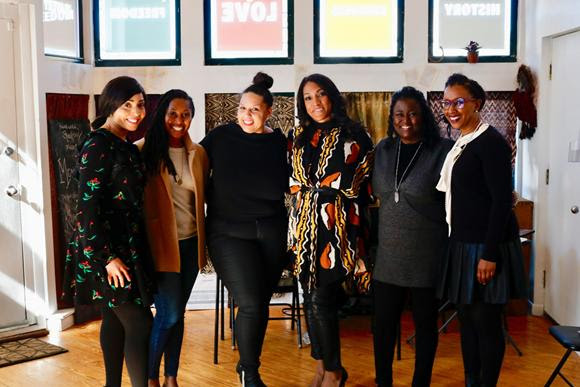 “The challenge these days, is to be somewhere, to belong to some particular place, invest oneself in it, draw strength and courage from it, to dwell in a community.” bell hooks

The marble plaza at St. James Cathedral is strewn with sunlight as we gather for our first viewing of an installation to remember victims of gun violence. Statues dressed in the clothing of victims are posed to mimic their gestures, appearing lifelike but faceless as a reminder that their lives have been lost. The effect is unsettling and as I cross behind the statue of Terrell Bosley, his mother, an activist and partner in this work, approaches her son’s figure. I am locked in place by the swell of emotions that crosses her face as she advances, reaching gingerly towards his gray sweatshirt. In an instant I feel useless and unprepared -- confronted with the impact of isolation, poverty, lack of services, and indifference that have contributed to high rates of gun violence in Chicago.

Raised in a city segregated by race and income, with a history of institutional policies that created visual delineations between those with means and those without, seeking solutions to the challenges faced by our communities can feel overwhelming for an individual. In this time of persistent antipathy for racial, economic, and environmental justice and rapidly changing political norms, opportunities to engage in social change are innumerable as are the issues of importance. Yet, as a Millennial working to bring resources to my community, sustain initiatives, and foster collaboration I have found it challenging to find opportunities that go beyond the fleeting tweet or one-day protest -- that allow me to build relationships, support my community, and invest in strategies that align with my values.

In the late 1700’s African Americans began a movement to provide economic support and assistance to their communities. Through mutual aid societies African Americans funded the underground railroad, efforts of the civil rights movement and the healthcare, education, and social services needed to confront systems of oppression that kept their communities from accessing basic needs. This culture of giving has continued in the African American community and according to the W.K. Kellogg Foundation’s Cultures of Giving report1 African American households give 25 percent more of their income to charity than the national average. But few in our community are aware of their philanthropic power. Narratives of failure and degradation surround black communities and so it is of little wonder that we struggle for visibility as philanthropists, as a source of giving in our own communities.

Facing the need to find community and invest in changing the conditions and systems that promote violence in Chicago I sought an opportunity to engage in giving that resonated with my desire to support African American women as agents for change in our city. I found that opportunity with the South Side Giving Circle of Chicago Foundation for Women (SSGC). SSCG launched this year as an effort to mobilize the philanthropic resources of women to invest in the economic, social, and political power of black women and girls in Metropolitan Chicago. By embracing the experience of service and the opportunity for leadership we provide space for authentic, people-centered collaborations around giving strategies that are responsive to our communities’ needs.

For many women seeking to have impact through collective action giving circles provide an opportunity for leadership and civic engagement. As described by the Collective Research Group2, giving circles are understood to be highly flexible and democratic mechanisms for giving. Much like the mutual aid societies that shaped the development of African American giving, giving circles are a growing movement that have attracted more than 150,000 people across the United States. These circles tend to be more diverse in race and gender than traditional philanthropy and seek deep engagement with funding recipients beyond just their financial support. Giving circles are of value to communities for the monetary investment that they provide but equally important for their value as catalysts for building capacity and increasing the visibility of the community organizations they support.

Nationally, it is estimated that just seven percent of all philanthropic dollars are allocated to address needs specific to women and girls, and funding has never exceeded 8.5 percent allocated to addressing the needs of African Americans.3,4 In Illinois, we are behind the curve, giving just three percent of philanthropic dollars to address needs specific to women and girls. The SSGC provides an opportunity to address this need and advance change in our communities. Imbued with this purpose we ask you to join us. To shift the lens and change the narrative, to make visible both the power of African American philanthropy and the strength of our communities.