Elderly tribal women in villages suffer with disorders which affect their everyday life due to the lack of awareness of the circumstances of living in extreme poverty, the lack of desired health services and social support systems, although their disorders can be easily treated. Objectives were to know the burden of disorders in rural tribal elderly women, their perceptions in a low resource region with extreme poverty .Overall 65% of women had complaints that included vision related 52%, hearing 23%, joints and muscles 19%,, high blood pressure and elevated blood sugar was present in 18% of women, and there were two cases of breast cancer diagnosed. After receiving medical advice and help, 80% of the women took action to improve their health. Overall, 77% of women said that they were satisfied with their life even with extreme poverty. By task, services were shifted to provide sustainable support. Women were apathetic about problems which affected their everyday life in the villages. Many stake holders were involved to help. In this era elderly women in remote villages live with problems where simple solutions are possible to improve their quality of life. It is essential to find ways to support women facing these health needs.

The elderly suffer more, and women even more so due to various reasons globally yet this is much more prevalent in developing countries. Elderly tribal women in villages suffer with disorders which affect their everyday life, although their disorders can be easily treated. It seems to be due to lack of awareness, extreme poverty, lack of desired health services, and a dearth of social support system, although there may be other reasons too.

Our objective was to better understand the burden of health disorders among rural tribal elderly women, and their perceptions in a low resource region with extreme poverty.

In some remote villages in the Melghat region of the Amravati district of Maharashtra province of India, community-based mother-and-child services were started in view of high maternal, Perinatal, and child mortality. When nurse midwives visited families to provide maternal care in the villages, elderly women, mothers-in-law, mothers, and the grandmothers of pregnant women of the community also approached them for services. The Elderly women had problems, but healthcare was neither sought and nor provided. They lived with disorders without medical testing done, and naturally without support. Women could not see but had no glasses to improve their vision. Some women had difficulty hearing and others could not even walk as they had joint and muscle problems but did not have proper sticks, canes or walking support or hearing aids. Some women used tree branches that are dangerous due to the risk of the stick breaking and causing the woman to fall. Many others had various other complaints for which some consultations were done but they lived with whatever problems they had. Yet, upon seeing the nurses in their villages, they actually asked for help, so it was decided to first find out the problems the elderly women faced and then try to provide service if appropriate services were to be provided it was essential. Funding could be procured from Global Health Through Education Training Services USA to enable researching the 30 villages. Nearing the end of research in 30 villages, it was realized that it was essential to try to find actual positions in 100 villages, the mother-and-child service area, where services were being provided. Locally available resources of mother and childcare were shared, and information was collected about the problems of women in the 100 villages. It was obvious that the elderly women were suffering from disorders for which care was possible with having them make simple movements and without the use of any high-tech equipment. Nearby Metropolitan Civil Society was approached for assistance as they have a commitment to social corporate responsibility. Funding was procured to help the women have a better quality of life by providing the women whatever health care and support was essential. Once information about their problems was available services were planned. Kasturba Health Society, Sevagram in the nearby district which started the mother and child health services, supported refraction checking in the villages. For sticks women were identified and provided with walking sticks and canes and for other illnesses women were helped with getting the proper diagnosis and related therapy. The mission was to provide doable services. Women could be provided with glasses, walking sticks and canes, and hearing aids right in their villages. Only some needed help through work ups and when this was needed the same supports were provided in hospital setting in the village or referral institute in a nearby district.

Overall, 65% of women had health complaints, vision 52%, hearing 23%, joints and muscles 19%, dental 14%, gynecological complaints 12%, urinary 11%, two cases of women with lumps in their breasts were identified (with some overlap with the other health conditions), and 18% of women had high blood pressure and elevated blood sugar levels. After receiving medical advice and help, 80% of women took action. Overall, 77% of women said they were satisfied with their life in the villages although they live in extreme poverty.

Those with Diabetes and hypertension were provided drugs for a few days from the base hospital in the village which provided care and services 24-7, and then later these women were linked to the special public health system under Aayushat Primary Health Centers that was created for non-communicable disorders by the Government of India. The women who had cataracts were brought to the hospital and helped through the Prevention of Blindness Programme of the Government of India under which they were able to receive free cataract surgery. For other illnesses women were guided to seek services from the base hospital. Two women had breast cancer and were helped through free cancer treatment initiatives at the main referral institute which had responded to the needs of remote rural communities living with extreme poverty. 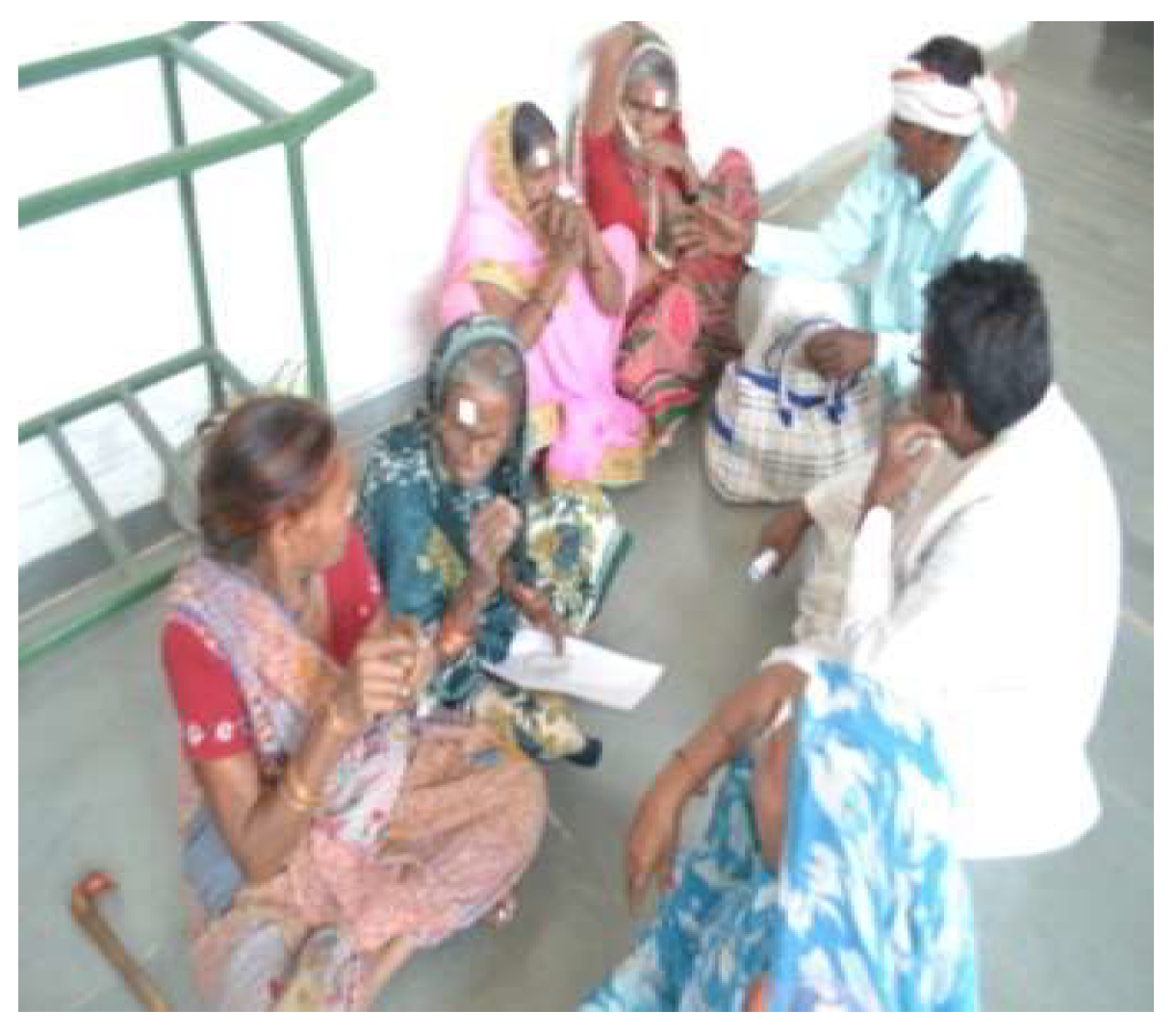 Overall, the beginning of community services began for mother and children services but ultimately led to elderly women seeking assistance and research was done to find about their disorders and provide comprehensive services to rural communities. By shifting services, we were able to provide help and create a system of doable and sustainable care. Women were apathetic about their health problems which affected their everyday life and they expected a special system for their care in the villages. In addition to apathy, there were issues of social support and sometimes transportation. In addition, for some disorders there are at this time no initiatives available through the government. Therefore, it would be necessary to seek support through civil society. When new problems arose, we worked together to develop new solutions so that the elderly rural tribal women living in extreme poverty could have an improved quality of life. Many stakeholders were involved to bring about the help needed by the elderly women.

In the modern era new knowledge is becoming available, like polycystic ovarian syndrome in adolescences could be responsible for coronary artery disease, hypertension, and endometrial cancer during aging. Hypertensive disorders in pregnancy could be an indication of CAD during aging among others, while preterm birth could be an indication of various problems in later life. More information is emerging about the disorders in female reproductive health which could lead to many disorders as women age. In this era, elderly women in remote villages live with problems where simple solutions are possible that can greatly improve their quality life. It is essential to find ways. However, certain illnesses like cervical cancer, bowel disorders, and others require more research.

Acknowledgements are due to the Global Health Through Education Training and Services of USA for providing funds through the Elderly Task Force of the Network Towards Unity for Health (TUFH) for research in 30 villages and also the Jan Kalyan Trust, Mumbai and Kasturba Health Society, Sevagram, Wardha, Maharashtra, India for the expansion of their research and support services.