In India, rural populations face difficulties in obtaining accurate and affordable healthcare. Simple diagnostic testing can be difficult to obtain, with patients needing to travel long distances and spend significant resources. Biosense, a company founded in India, provides increased access, convenience, and affordability of diagnostic solutions through low-cost and low-resource, point-of-care diagnostic tools. In order to more accurately diagnose and combat anemia, Biosense developed their pioneer product, the ToucHb. The ToucHb is a non-invasive test for anemia that measures hemoglobin levels, without the use of a needle, in mothers and children living in low-resource areas. Biosense has also developed several other core product offerings, including uChek, a routine urinalysis and microalbuminuria device, and SYNC, a diabetes-screening device that enables the self-monitoring of blood glucose levels. Biosense has used these products, as well as key relationships with prominent health institutions, to have a large impact on delivering affordable healthcare screening to low-income patients.

In a village in rural India, a woman is in the midst of delivering a baby. A doctor and village health worker are attending the birth. All seems well. But soon a problem arises: the mother is experiencing severe internal bleeding associated with postpartum hemorrhaging. The doctor is unable to stop the bleeding, and the mother and the child both pass away. The cause? Undiagnosed Anemia, a disease that in most places is easily diagnosed and treated, normally with simple pills containing iron and folic acid.

This lack of uniform and easy-to-access diagnostic services is a major hurdle to providing quality healthcare to low-income populations. When digital diagnostic devices are not available for on-site screening, patients must instead undertake less accurate and invasive tests, or be forced to travel long distances in order to access the high-quality service required. When accurate diagnostic testing is available, it greatly helps to diagnose the patient’s condition and to draw up disease management plans and follow-up schedules for treatment.

Biosense was founded in India in 2008 to supply this gap in the market. The company produces diagnostic testing tools for basic health care screenings that are portable, affordable, accurate, and easy to use. “Biosense was founded with the aim of providing innovative and most affordable diagnostic solutions to the last people of the society, to help lead them towards healthier lives,” said Dr. Abhishek Sen, founder of Biosense Technologies.

When the company was founded, it began by targeting a number of persistent health problems facing the Indian population. In addressing these issues, including anemia and diabetes, Biosense’s aim was to develop diagnostic testing solutions which were affordable to patients of all income levels. In addition, this testing equipment would be portable and easily operable by village health workers, allowing for it to be used in rural and low-income settings that lacked the resources for more traditional and expensive equipment that required a specially trained technician.

Biosense set about designing and testing a number of core products. In 2016, the company moved from product testing into full distribution of three main products: ToucHb, uChek, and SYNC.

ToucHb is a non-invasive anemia screening device, meaning that a needle prick is not necessary for a diagnosis. Anemia is a blood disorder that leaves women at a higher risk of dying during pregnancy or giving birth prematurely. The number of anemic children and pregnant woman in India is rising, partly due to the lack of a reliable and easily accessible testing. Additionally, many rural patients prefer to skip traditional tests due to the fear of being poked by a needle.

Advantages of the ToucHb are numerous. It is affordable, and the machine is paid for by health centers with a one-time cost and no recurring costs thereafter. The fact that the machine is non-invasive increases compliance in screening by removing the fear of needles shared by many Indians. The ToucHb accomplishes this without sacrificing accuracy in the screening process.

SYNC, a diabetes screening and blood glucose self-monitoring device, is Biosense’s second core product. India is considered the diabetes capital of the world, with more than 62 million people affected by the condition.1 By 2030, the total number of Indians with diabetes is expected to grow to more than 100 million.

Although diabetes is a serious condition, awareness in India is low, and people lack the ability to assess their own risk of developing it. Accurately monitoring a patient’s blood glucose levels is crucial in helping to control diabetes, and also to identify pre-diabetics. Once identified, frequent testing assists patients in developing a plan to manage the condition.

Biosense’s aim was to design a device that was convenient for daily use and added value by providing users with more meaningful results by utilizing advanced technology. The result of the aim was SYNC, an integrated glucose monitoring device designed for personal use. The strips are affordable and cost only 33 percent of conventional glucometer strips. The device has a high level of accuracy and also meets the international standard for glucometer accuracy.2 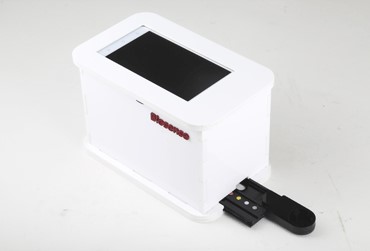 Finally, Biosense created uChek, a smart phone based portable diagnostic system that measures the microalbumin to creatine ratio in a patient’s urine. This urinalysis test is routinely prescribed and is used as a key diagnostic measure to identify many abnormalities related to the liver and kidney, as well as other conditions like diabetes, cardiovascular diseases, and infection.

Like their other tools, Biosense made affordability and accuracy the key benchmarks of the product. uChek comes in at only a 50 percent cost compared to competitors and offers 100 percent accuracy in line with CE/FDA standards.

Designing their core product offering was only one step in reaching low-income and rural patients. Biosense also needed to distribute their equipment to both government institutions and private pharmaceutical companies. “For the growth of Biosense, we are expanding our field force into pan-India with the aim of approaching more healthcare professionals, so that our product will reach the largest number of people,” said Abhishek Sen, Founder of Biosense Technologies.

Since inception, Biosense has worked diligently to build awareness and trust among key organizations and actors in India’s health industry. The country’s medical screening device industry is still in its early stages, with the higher end of the market being served primarily by imported products from western countries, while the lower-end of the market is still largely under-supplied.

Biosense seized this opportunity at the bottom of the market by first working with public institutions on prominent pilot programs, building partnerships with academic innovators, and securing endorsements from leading physicians.

Core to Biosense’s goal of reaching as many patients as possible is working with public institutions. The company’s close collaboration with the government led to Biosense becoming, in late 2015, the first pre-approved company with pre-negotiated prices for central and state level government tenders in pan India, allowing an easier procurement process in all states.

As the company has scaled, Biosense has also optimized their production processes by building a new manufacturing and assembly facility in Thane, Maharashtra, along with a laboratory for manufacturing reagent strips in Kochi & Kerala.

The approach has paid off. In FY 2017-2018, close to four million tests were run on patients using Biosense’s SYNC, ToucHb, and uChek.

Funding and Next Steps

Expanding operations has brought the need for external funding and investment. Biosense has made use of a blend of financing options to grow and scale their operations and product offerings. Early on, the company’s R&D activities and first phase of expansion were funded through grants. As the company began to roll out their products on a commercial basis, it raised a first round of financing from the Insitor Impact Fund, along with an individual angel investor. Since then, Biosense has taken on additional investments from other private equity funds, including the Menterra Social Impact Fund, Fireside Ventures, and Lesing Artha Limited.

“Biosense is a long-standing investee of ours and one where we deeply value our close relationship with the founders and senior management team,” says Gurmeet Kaur, Senior Advisor at Insitor Impact Asia Fund and Biosense board director. “As an early, and largest external investor in the company, we have seen it grow from an idea stage to a business with a diversified suite of products targeted at the Indian health market. In line with our initial investment thesis, Biosense continues to be one of the select few Indian diagnostics companies that have developed their own innovative technologies targeted at the masses in India. We continue to be excited by the company’s growth prospects over the near and distant future.”

Moving forward, Biosense’s executive team knows that there is still more to accomplish. First among those is expanding their product reach to even more primary healthcare centers, both public and private. In addition, developing new products to address other gaps in the market is a strong possibility. “Our new, innovative products in the pipeline will establish Biosense as a leader amongst competitors. These products will help provide people with even more affordable healthcare solutions,” said Dr Abhishek Sen, Founder of Biosense Technologies.

Bradley Kopsick is the Myanmar Country Manager at Insitor. Bradley contributes to the growth of the Insitor Impact Asia Fund. He resides in Yangon, Myanmar.