Behind Quiriva Network lies a very special story of wittiness and generosity; Quiriva is a great dream that has turned itself into a challenge.

This unique story started when a Guadalajara entrepreneur decided that his luxury car, that he had bought as some sort of personal reward some years ago, should turn into a means to help others. He had the idea to use his Ferrari to benefit many people, thus he decided to give it away as a donation through Corporativa de Fundaciones1, an entity that can be described as a foundation group that has become a leading entity in the State of Jalisco. Corporativa de Fundaciones focuses on partnerships of people and civil organizations to provide support to vulnerable groups. This entrepreneur wanted his Ferrari to be given to one association among the many associations of Jalisco, Mexico.

By January 2017, Corporativa de Fundaciones made an individual call to some associations of the group under a campaign called “What would do you if you had a Ferrari?”2, and encouraged them to answer the following question, “What would you do to take the best out of a Ferrari, if it was donated to your Association?” Each association was given the opportunity to explain the reasons why they should be chosen to get the funds. The one with the most insightful answer would be the winner.

Everybody got very enthusiastic about the challenge, and many different ideas, all very creative, were submitted. But the winner gave a striking answer. We are referring to Fundación PAS, an organization working to prevent sexual abuse. They rendered the most visionary and generous reasons by explaining as follow:

"We would share these funds with other participating organizations, and would work in collaboration to multiply the value and the social impact of our actions through this object. Today, more than ever, our country needs us to be together -- civil associations, business people, everyone, no matter what our social status, race, or religion is. We need to change the title of the book written by Robin S. Sharma, ‘The Monk who sold his Ferrari’, to ‘The Monk who shared his Ferrari, brought people together, doubled the amount, and was able to help the world.’”

The intention behind the answer was explained to us by Eduardo Cruz, PAS’ Director General: “We’re living an era of change, and we are amid a social and economic crisis. Education promotes competition and individualism. Our human values are based on the accumulation of material wealth, and only one percent of people own 50 percent of the world’s assets. This is why, instead of getting divided, we need to come together, we need to build bridges of collaboration. We’re urging others to be open to the opportunity of building a better society.”3

In March 2017, Corporativa de Fundaciones started inviting other participating associations to participate in leveraging this Ferrari’s value, so everybody could benefit. More than 10 associations felt encouraged to join. All showed interest and commitment under the premise, “sharing is much better than competing.” 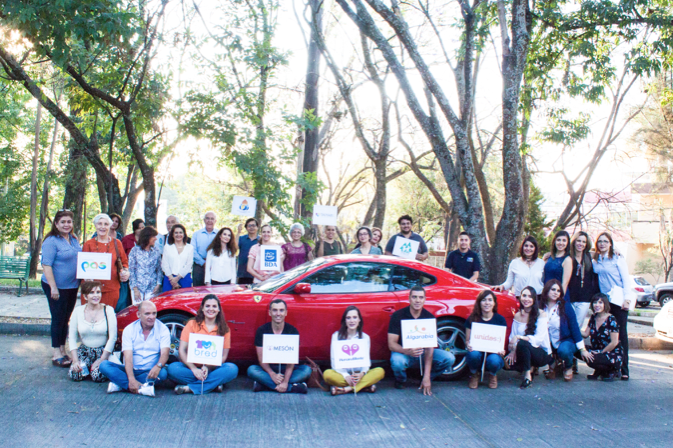 This is when associations started putting all of their efforts into organizing, modeling, developing, and searching for alternatives in order to define their objectives, scope, identity, and a long to-do-list, to ensure that their expenses would be covered by the value of the Ferrari.

Once all of the associations accepted the challenge, the project was formalized and they started setting the rules to work and support each other. They never put their own operations at a halt, or depleted their own resources.

This model was conceived under the following goals:

One of the first actions to be carried by the group of associations was to designate a representative empowered to organize work teams, so this gigantic job could be carried out by following one single vision. These 11 heterogeneous associations, all working for very different causes, would complement each other under one single goal -- helping people in need.

Quirva is a network of 11 Guadalajara-based civil associations linked together under one slogan and goal, “sharing is much better than competing.”

Quiriva, in Wirarika language, means “big basket.” That is the meaning and essence of Quiriva Network. A basket where everything fits in, where all causes are put together, and where all people, objects, trades, and jobs add up so we can all share.

Our logo is a sample of a woven piece of fabric that shows how all threads come together, adding up, intertwined to harmoniously connect to infinity, or to become as small or large as required.

It was through hard work and effort that this campaign was launched. This groundbreaking campaign envisioned all causes together -- forming a network. This initiative offered an opportunity for participating organizations to work in permanent collaboration with one another, but most of all, this campaign transcended its beginnings with the Ferrari. Very soon, Quiriva developed into an innovative human project, through which several equal benefits would be obtained, based on the strength that was born from this union.

The objective has been achieved on a step-by-step basis, and this enthusiasm has been spread to other circles, therefore other people have joined, donating objects like watches, cars, art pieces, and sports collectibles. There have also been donations of talent and advice4, everything under the premise that at Quiriva everything is added and divided into 11 great causes, with the understanding that this is one single cause.

Each association will decide what use these funds will have. They will also decide how they will individually report the benefits, direct or indirect, of what Quiriva has granted.

Quiriva’s concept has been so disruptive that several sectors have praised Quiriva for its originality and unique characteristics. The media have covered all of this, and the most important local newspapers (Mural) have published reports about each supported cause. Engagement has also included the creation of 11 sculptures to represent each cause. These are urban-art pieces created by Álvaro Cuevas under a project named “We all leave our foot-print.” Young local talent has showcased Quiriva and the work of all these associations.5

Today, Quiriva has established a main goal -- to join efforts and, through the consolidation of this 11-Association Network, their work in favor of common wellbeing, gained assets, and valuable goods that will turn into direct benefits to the families that are either discriminated against, alienated, or suffer from hunger, violence, and/or abandonment.

Quiriva Network is based on the dream of transcending time, and to continue the work once this year ends. Initially, one year was set as the deadline to work on multiplying the Ferrari’s worth. Yet, Quiriva has inspired other associations to engage, under different mechanisms that have yet to be created, in order to add more causes, so together we all become stronger, more visible, and committed to maximize Quiriva’s Force.

Quiriva is this weaved basket that will continue to grow based on the hard work, determination, and support that each volunteer contributes. This network is a permanent invitation to our society to become involved, for each individual becomes more sensitive and connected to this idea of “sharing is much better than competing.”

Quiriva’s story has just begun -- the best chapters are still to be written.

If you are interested in learning more about Quiriva, visit www.quiriva.org.

Angela Meraz has a master’s degree in human sciences from Mexico City. For 35 years, she worked at a financial institution and her positions were related to internal and external communications, marketing, public relations, and media support. She has served as an advisor to Mural and Milenio, two newspapers published and distributed in Jalisco. She is part of the Professional Board of Communication Experts of Guadalajara, and is Vice-president of the Latin-American Association of Public Relations (ALARP), Mexico Chapter. She currently works as a volunteer at Voz Pro Salud Mental Jalisco, Civil Association, and also as an independent advisor for three different advertising agencies.