The prevalence of obesity is increasing worldwide at an alarming rate in both developed and developing countries.[1] Childhood obesity can lead to increased airway resistance and respiratory muscle dysfunction as a result of excess fat deposition.[2] One of the major health problems is respiratory disorder induced by obesity especially in childhood. There is now good evidence that central obesity carries more health risks compared with total obesity. Central obesity is assessed using waist-to-height ratio (WHtR), which is a very good indicator and we use a cut-off of 0.5.[3]

Peak Expiratory Flow Rate (PEFR) is a person’s maximum speed of expiration, as measured with a peak expiratory flow meter, a small hand-held device used to monitor a person’s ability to breathe out air. It measures the air-flow through the bronchi and thus the degree of obstruction in the airways.

PEFR is accepted worldwide as the objective indicator of ventilatory capacity and is helpful for diagnosis and management of respiratory illness.[2] Several studies have shown that obesity has a strong association with PEFR and that PEFR was significantly lower in individuals with obesity.[4,5,6]

Researchers found that fat accumulation over the chest wall reduces the PEFR mostly among all the pulmonary function indices. A negative correlation was observed between pulmonary function parameters and visceral adiposity that in turn establishes that visceral fat deposition that negatively affects pulmonary activities.[2]

Tenorio et al. conducted a systematic review to find evidence of an association between spirometric values and obesity in children and adolescents.[7]

We planned this study to screen for pulmonary function in school going children belonging to two rural schools to assess if increased body weight in these rural adolescent school children will affect their pulmonary function and make them more prone to respiratory disease.

However, studies which showed that anthropometric measures for central obesity such as waist-to-height ratio and waist circumference are slightly better predictors of risk factors in populations of all ages compared to measures that assess total obesity such as Body Mass Index (BMI). [9,4]

In recent years, waist-to-height ratio (WHtR) has received a lot of attention and has been described as a good surrogate for central (visceral) adipose tissue and as a marker

The same authors had suggested that the boundary value of WHtR of 0.5 should be the cut off for assessing central obesity using a simple message: “Keep your waist to less than half your height.” This is how they entitled their article describing it as a simple, low cost anthropometric measure to assess early health risk.[11] Several systematic reviews and meta-analysis in children[13] and adults[14] have backed their claim that risk factors not present within groups with normal BMI are significantly increased if the WHtR is increased to more than 0.5 supporting the view that WHtR over 0.5 is an indicator of early health risk. [4]

Strengths and Limitations of this study

Panjikaran studying overweight school children in Kerala found that prevalence rates obtained using percentiles were proximate to that using waist-to-height ratio (WHtR) cut-off of 0.50 and were on par with the reported rates. The prevalence was worked out with WHtR values from 0.45 to 0.53 and compared with percentiles. [15]

In terms of cost effectiveness, measuring BMI requires a weighing scales as well as a stadiometer for measuring height; WHtR requires a tape measure and stadiometer. Since a tape measure is cheaper and more portable than weighing scales, the use of WHtR will be more cost effective. If the assessor only wishes to know if the participant has a WHtR at or below 0.5, the tape can be replaced by an ordinary piece of string, and the methodology becomes even more cost effective. [4]

Five to 18-year-old Indian children in January 2015. Body Mass Index charts presented are based on adult equivalent cut-off lines (for overweight and obesity respectively) and are more appropriate for use in Asian children, as Asians are known to have more adiposity and increased cardio-metabolic risk at a lower BMI.[12]

metabolic risk factors have also been examined in adolescents.[1] Childhood obesity may lead to a range of physical and psychosocial health complications. Physical health problems mainly include cardiovascular risks due to high blood pressure, high cholesterol, and high insulin resistance.[2]

The Peak Expiratory Flow Rate (PEFR) is a good marker to diagnose pulmonary disorders that originate as a result of obesity. The PEFR in obese children is significantly lower than non-obese children and is considered to be the simplest test among the pulmonary function indices.[2] PEFR was first introduced by Adorn in 1942 as a measurement of ventilatory function and was accepted in 1949 as an index of spirometry.[18] Tenorio et al found that there is consistent data and evidence of association between decreased spirometric values of forced vital capacity and forced expiratory volume in children and adolescents with obesity.[8] The Peak Expiratory Flow Rate is used as a measurement of the pulmonary function as it is a sensitive indicator to measure the strength of the muscles of respiration. The Peak flow meter is used to measure peak expiratory flow rate (PEFR) [17]

This is an observational study on school children attending two rural schools.

i. Study population: School-going adolescent children in the age group of 13 to 15 years attending a private school in a rural area.

ii. Approval for study: Approval for the study was obtained from the institutional review board and ethical committee. Permission was taken from the school authorities to conduct the study.

iii. Research question: Do children who have a waist-to-height ratio more than 0.5 have a greater risk of having a reduced peak expiratory flow rate indicating risk of pulmonary disease.?

iv. Study Design: This is a cross-sectional study

viii. Sample size: Sample size was calculated using Master Sample Size computer[7] software using the mean values from the study by Borse et al.[8] In the reference study the overweight group had a mean PEFR of 405.96(SD-87.24700) and the normal weight group had a mean PEFR of 499.04(SD-112.69445). For a confidence interval of 95 percent and an estimated mean difference of 15, the required sample size was 347 adolescents. 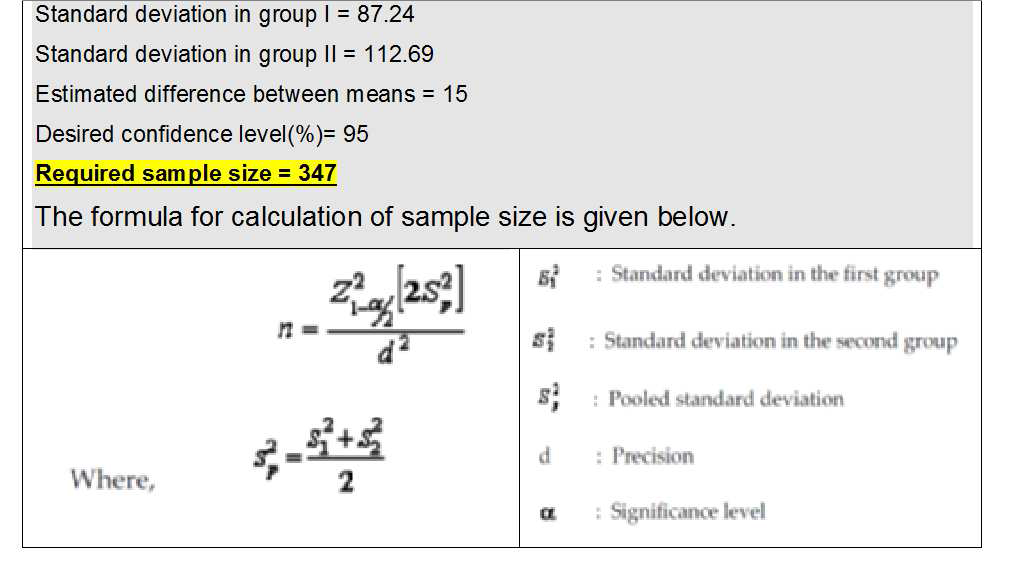 a. Height was recorded to the nearest centimeter.

b. Waist circumference (WC) was measured using a standard tape measure at the mid-point between the lower margin of the last palpable rib to the upper level of the iliac crest.

c. Waist to height ratio (WHtR) also called waist-to-stature ratio (WSR), is defined as the waist circumference divided by the height, both measured in the same units. The WHtR is a measure of the distribution of body fat and the cut-off used is 0.5.

d. Groups for the study: Using the cut-off of 0.5 of the WHtR the children were classified into two groups:

a. Group A: Children with WHtR less than 0.5

b. Group B: Children with WHtR greater than or equal to 0.5

All of the data were entered into a computer spread sheet and summarized using charts and graphs. The children were grouped into two groups based on their waist-to-height ratio and the mean PEFR for each group was obtained. The variables in the two groups were compared using the Chi square test. A ‘p’ value of .05 was considered significant.

Permission was obtained from school authorities and written informed consent was received from the parents of the children. Children who had pulmonary problems were given a referral slip to the medical college and would receive appropriate help. A class was taken after the study to teach the children good principles of healthy living such as balanced diet, adequate exercise and sleep, and less sedentary activities.

After permissions were obtained the parents were approached for written informed consent. A questionnaire to obtain the demographic data and needed parameters was sent to the parents to obtain all the necessary information. The demographic data and relevant history was entered into the Case Study Form. The anthropometric parameters i.e. height, weight, and waist circumference measurement were obtained and the waist-to-height ratio (WHtR) and BMI was calculated. The children were divided into two groups, Group A and Group B, based on the WHtR. PEFR measured for each child. The mean values of PEFR for the two groups was obtained and statistically analyzed in the two groups. 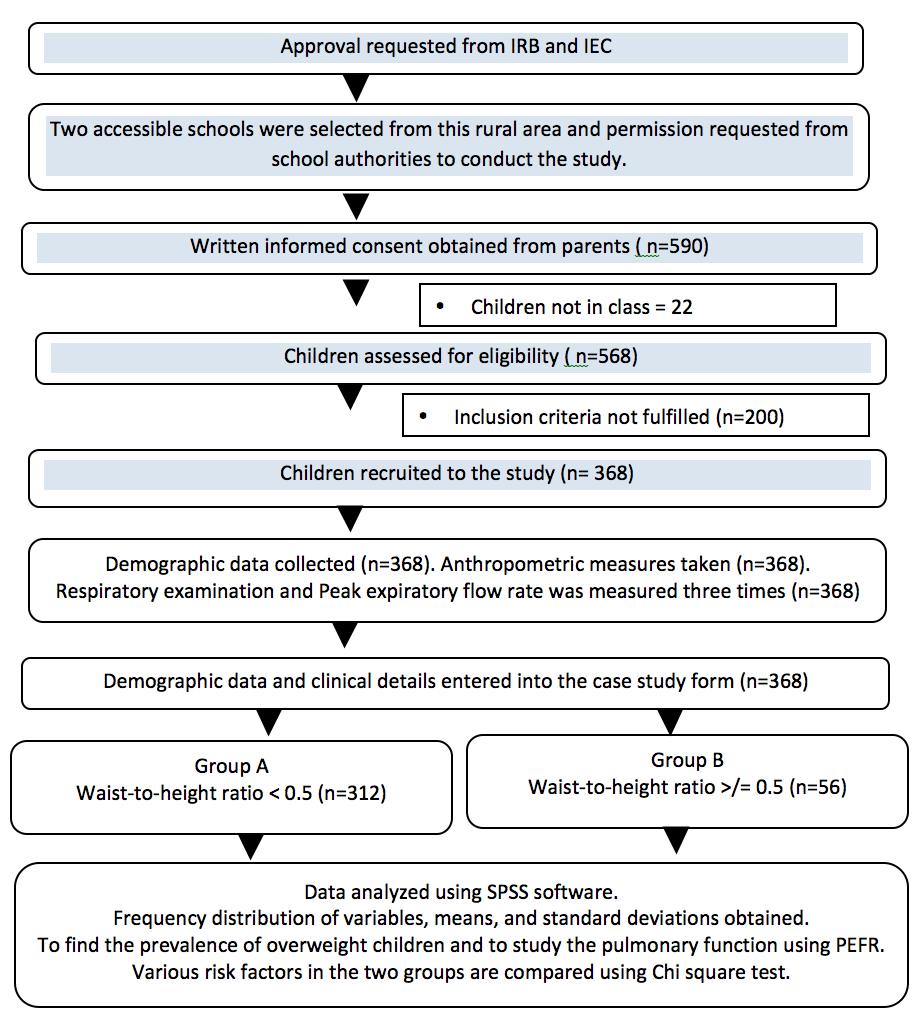 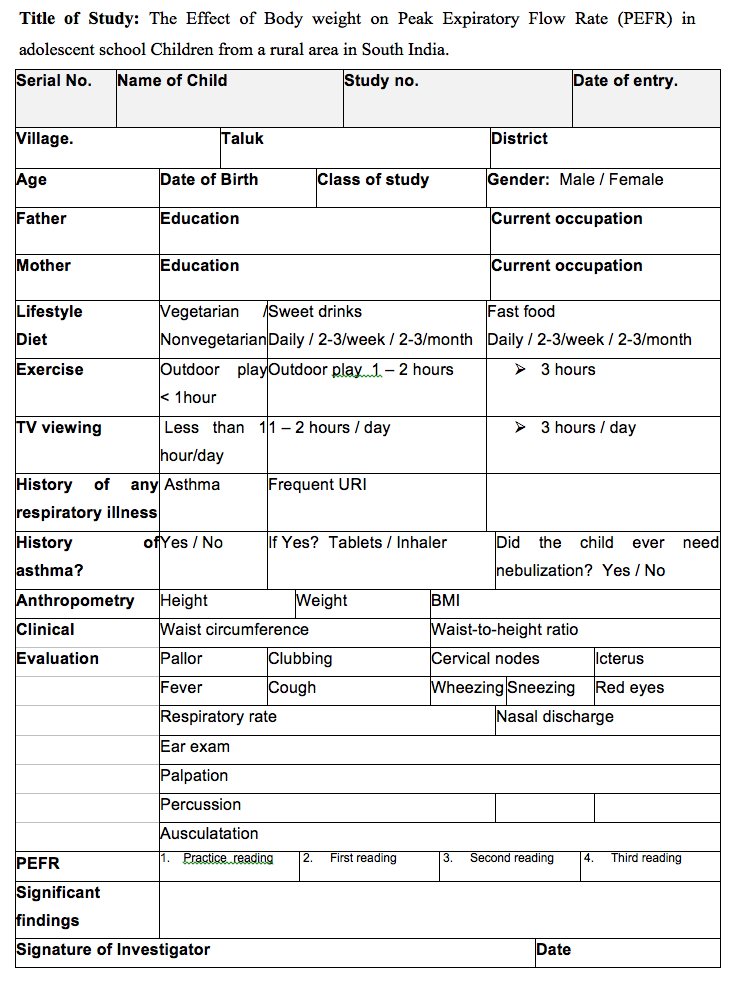 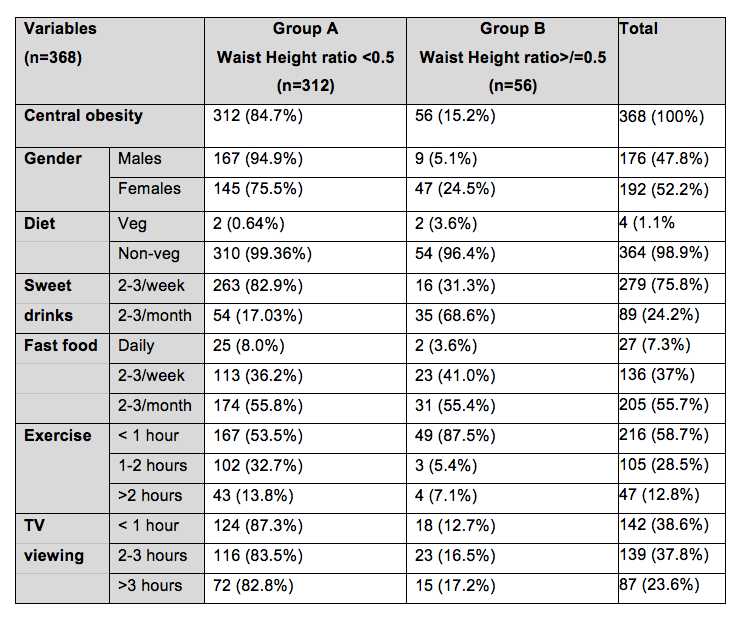 There was a significant difference in the mean height, weight, waist circumference (WC), waist-to-height ratio (WHtR), body mass index (BMI), and Peak Expiratory Flow Rate (PEFR) in Group A and B. There was a significant reduction of PEFR in the overweight group (Group B). The mean values and p values are given in Table 2. 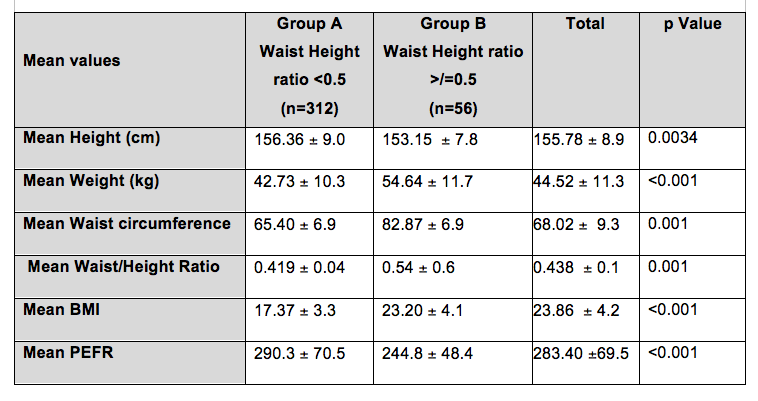 The gender distribution of children in the two groups is given in figure 2A and 2B.

Figure 2A and 2B. Gender Distribution of Children in the Two Groups

In our study a significant number of females had WHtR >/=0.5 compared to males.

The bar diagram in figure 3 shows the mean PEFR of the two groups. 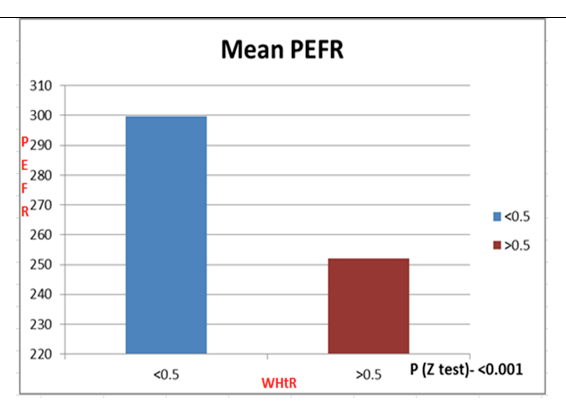 Group B with WHtR>=0.5 had a lower mean PEFR value and is statistically significant (p<0.001). 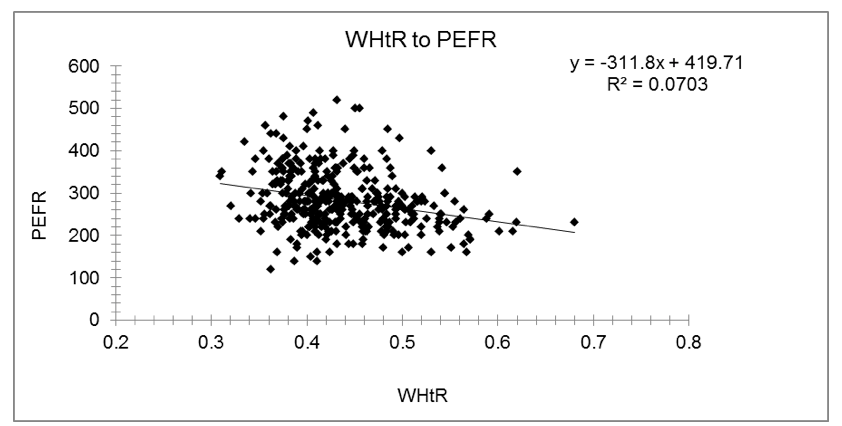 There is a NEGATIVE trend in the relationship → when waist-to-height ratio increases PEFR value decreases.

Figure 5: Effect of Height to PEFR 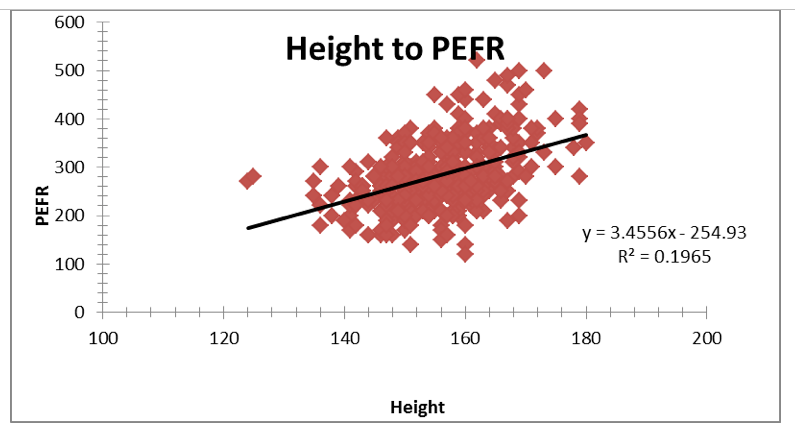 There is a positive trend in the relationship → when Height increases PEFR value also increases.

The prevalence of overweight in our study based on the waist-to-height ratio was 15.21 percent.

Regarding the risk factors, though more numbers in the overweight group had them they were not present in significant  numbers.

This study was conducted to find out the effect of body weight on Peak Expiratory Flow Rate (PEFR) in adolescent school children from a rural area in South India. We classified the children using the waist-to-height ratio (WHtR) into group A with WHtR less than 0.5 and group B with WHtR greater than or equal to 0.5 and then assessed the PEFR to find out the effect of increased body weight on PEFR. Study population was school-going adolescent children in the age group 13 to 15 years attending a private school in a rural area. Study design was a cross-sectional study. Study duration was two months. Study period was from June15 to July 30, 2017. Sample size was measured using nMaster Sample Size computer software using the mean values from the study by Borse et al. For a confidence interval of 95 percent and an estimated mean difference of 15, the required sample size was 347 adolescents school children.

Obesity is increasing worldwide at an alarming rate in both developed and developing countries. Childhood obesity can lead to increased airway resistance and respiratory muscle dysfunction as a result of excess fat deposition. One of the major health problem is respiratory disorder induced by obesity especially in childhood. Central obesity carries more health risks compared to total obesity. Waist-to-height ratio (WHtR) is a very good indicator of central obesity. Peak Expiratory Flow Rate (PEFR) is accepted worldwide as the objective indicator of ventilatory capacity and is helpful for the diagnosis of respiratory illness. Several studies have shown that PEFR is lower in individuals with obesity. We planned this study to screen for pulmonary function in school going children and to assess the increased body weight in these rural adolescent school children.