Combined sewage systems (CSSs), in which rain and sanitary sewage are mixed together and discharged into local waters, are one of the leading sources of water pollution in the United States. The sources of this pollution are, to a large extent, controlled -- and contributed -- by the communities that surround the waters to which their sewage is released. All communities with CSSs must incorporate a form of public participation in their long-term control plans in an effort to mitigate their impact. Ideally, public participation could evolve from traditional, passive sharing of information to active community engagement with a measurable reduction in water pollution. StormSensor, a Seattle-based tech startup, proposes that more active solutions are possible if the current gap in empirical data can be filled in a way that is cost effective, efficient, and easy for communities of all sizes to adapt.

According to the U.S. Environmental Protection Agency (EPA), approximately 860 communities, Seattle included, rely on CSSs to handle runoff from rain events. CSSs are those where stormwater sewers and sanitary sewers are connected, which means when it rains, water treatment facilities become overwhelmed and discharge a mix of rain water and raw sewage directly into local waterbodies (Figure 1). Effluent from combined sewage overflows (CSOs) contains a wide array of pollutants, including heavy metals, nutrients, and human pathogens (EPA 1994). Although most communities undertake at least some action to control these releases, a substantial amount of work remains to be done (EPA 2004).

CSOs are controlled using best management practices (BMPs). These practices include structural engineering-type controls along with non-structural measures, such as policy changes and community education programs. The National Environmental Policy Act (NEPA) calls for the “integrated use of natural and social sciences…in the planning and decision making which may have an impact on the environment” (NEPA 1969 S102, 2A). This call is particularly apt in the case of water pollution, because, to a large extent, the surrounding community controls the sources of wet weather pollution (EPA 2005). For this reason, the EPA mandates that public participation programs be included as part of the stormwater management plans for those communities that manage CSSs (EPA 1995).

Public participation efforts have traditionally been consultatory in nature, including things like informative meetings and/or public warnings about water quality when warranted. However, research demonstrates that public participation efforts actually have the greatest impact on improving local water quality in cases where local citizens engage in active pollution prevention instead of cities simply disseminating information (Dietz and Clausen 2004). This type of participation allows the community to gain understanding about the role they play within their watershed, and it presents them with opportunities to take ownership and practice responsible citizenship (Duram and Brown 1999).

The primary limiting factor in CSO control plans is a lack of data. Most CSSs are evaluated based entirely on modeled data with little to no validation. Overflow volumes, pollution loads, and impacts to local waters are largely estimations. To date, very few of the communities across the country with CSSs collect any real-time data at all because the high cost of traditional sensors precludes widespread adoption. New York City, for example, is home to the nation’s largest combined sewage system, which is estimated to discharge more than 6.5 billion gallons of raw sewage each year (DiNapoli 2018). There is currently no system in place to track these discharges. As previously mentioned, all regions with CSOs are mandated to control sewage releases and warn the public when they do occur. This is rather difficult to achieve when no real-time data are being collected. It is equally difficult to encourage the public to participate in a meaningful way when the problem has not been quantified or directly linked to the community.

Making an Impact with StormSensor

The EPA requires all communities with CSSs to develop community participation plans and CSO warning systems as part of their long-term control plans (EPA 1995). It would behoove these communities to utilize the full potential of this requirement and actively engage the public in pollution prevention to spread awareness and engagement, effectively reducing the overall scale and impact of CSOs.

Current warnings in CSS communities, such as Seattle, Atlanta, and New York City, are based on model estimations. They often post messages on their websites warning residents to refrain from fishing, swimming, wading, or otherwise contacting the affected waters during the span of the CSO event and for some period of time after the event ends. Adding a request for the public to conserve water until the CSO event is over would give their citizens an opportunity to actively participate in reducing pollution to their local waterways.

Modeled data suggests that encouraging the public to conserve water during storm events goes a long way to reducing the pollutant load to local waterways during CSOs. For example, a model run for a community in Brooklyn, New York, predicted that only 50 percent community participation in water conservation during storm events results in a 45-50 percent reduction in nutrients and fecal coliform (Stempel 2014).

This model has yet to be tested quantitatively, and StormSensor wants to be the first to bring this solution to scale by helping communities overcome the biggest obstacle: access to real-time data with actionable insights. In order for cities to ask the public to take action to prevent CSO pollution, they first have to get an accurate idea of where, when, and how much combined sewage is being discharged in the first place. This would entail having real-time sensors at every outfall to local waterways, which, to date, has been economically unfeasible due to the high cost of traditional monitoring equipment.

StormSensor has developed a system for monitoring and quantifying CSOs in real time, and it has done so with the end-goal of making region-wide deployment fit into a typical municipal budget. This system includes Scute™ sensors which measure water level, velocity, and temperature, paired with Terrapin™ web-based software which pulls the sensor data and hyperlocal weather data. The StormSensor team is currently developing algorithms to send instant notifications when a CSO event is occurring, as well as calculate the volume of each overflow. StormSensor’ software instantly sends notifications that a CSO has started or stopped to utility managers; cities can push these notices to the public to increase the accuracy of warning messages and encourage participation in water conservation during rain events as a way to reduce pollutant loads. Additional sensors could be placed on outgoing sanitary pipes to residential blocks as a way to quantify and confirm participation efforts. Community’s would then be able to provide incentives to communities who participate, similar to flex programs often offered by power companies that encourage residents to use less power during the summer to prevent outages. Such a measure would not only allow for better informed citizens, but also encourage them to take meaningful action to improve their local water quality and contribute to their city’s efforts to reduce the frequency and impact of CSOs. 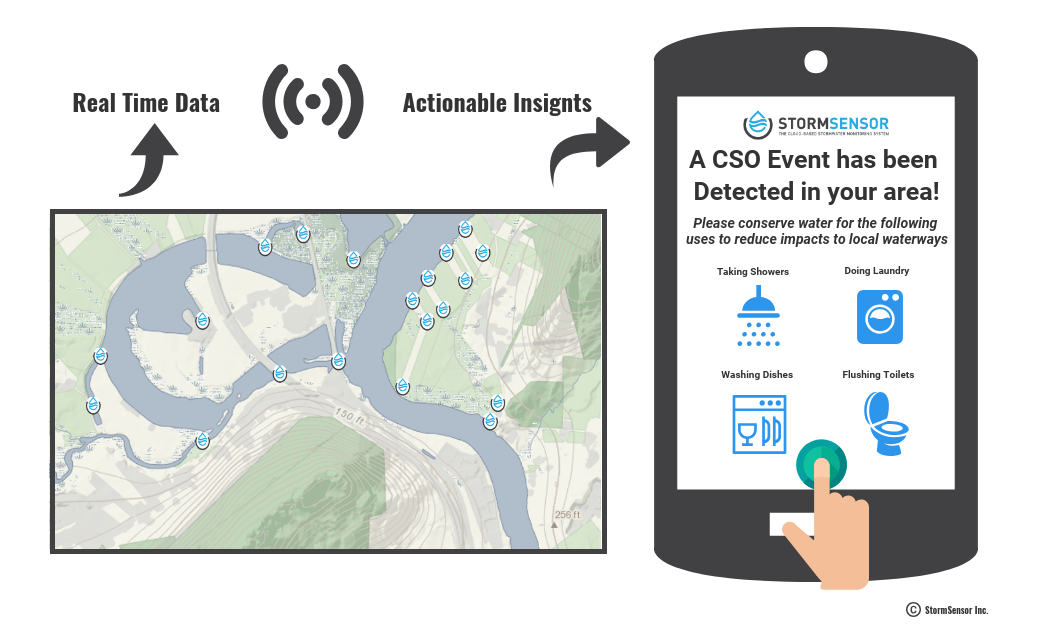 StormSensor plays a major role in closing the empirical data gap in regards to CSO control. The example provided here is just one of the possible uses for the StormSensor system, which also can be applied to stormwater management, coastal management, food control, and climate change. In all use cases, StormSensor encourages users to think beyond traditional data capture and use innovative technology to make a larger impact on their community.  For more information about StormSensor, please visit our website. We also encourage you to also check out our blog to get more examples of the work we’ve done.