Today’s global issues have changed so dramatically in size and complexity that no single class of player can pretend to solve them alone.

As a result, alliances have been forged to tackle major issues (access to vaccines, new forms of energy, and food) but very often in emergency contexts and most of the time led by government or private donation programs.

Yet in a world marked by an increasing rate of change, social problems have become so widespread and numerous that these classical alliances between international or local NGOs and international bodies are no longer sufficient. New types of approaches must be invented that leverage market dynamics to solve our world’s most entrenched and challenging issues.

Ashoka Fellows, two-thirds of whom have partnered with for-profit companies, are leading the way on transformative alliances with the private sector. In this article we will share best practices and lessons from our Fellows on creating transformative change through strategic business alliances.

Why Social Entrepreneurs and Companies Need to Work More Closely Together

At Ashoka we are convinced that social entrepreneurs can play a key role in this new paradigm because of their systems change mindset and their constant quest for more efficient, sustainable, and replicable solutions. More strategic alliances with the private sector will expand Fellows’ reach and impact while establishing companies on the cutting edge of new markets and opportunities.

On their end, large corporations are increasingly confronted with questions about their quest for purpose, their markets of tomorrow, attracting and retaining talent, and the need to do business in a way that enhances the world we live in.

Companies’ innovation strategies focus mainly on product development (through incremental processes) or on digital solutions, often without seeing the “big picture” and radically new approaches. Employees end up lacking purpose and leaving their job. According to Gallup, only 13 percent of employees worldwide are engaged in their work.1 Finally, most global corporations tend only to operate in the upper tier of the world’s pyramid, serving people who can afford their products or services. As a result, this space has become overcrowded, while, at the same time, many people still lack access to basic goods like electricity and running water, and companies repeatedly fail in approaching those “BOP” (Base of the Pyramid) markets which require totally different approaches and business models.

Social Entrepreneurs Are on the “Bleeding Edge” of New Markets, Innovation, and Purpose

Ashoka Fellows have a track record of demonstrating that their ideas can have profound impacts in the business sector. In the 2018 Global Fellows Study we found that 93 percent of Ashoka fellows have transformed market dynamics and 60 percent have created entirely new markets.

For instance, four years before the inception of Mpesa, Ashoka Fellow Brian Richardson co-founded an organization called Wizzit, servicing unbanked or underbanked people in South Africa which was recognized as the first mobile bank.

These innovations were developed to serve social purposes first, and had widespread social impact, but also ended up influencing future major corporate players who brought those innovations or some of their key components to the next level, giving millions more people access to these ideas.

Social entrepreneurs are very often ahead of the curve and can come up with disruptive innovations. However, one is forced to recognized that for all sorts of reason, especially cultural and structural, they barely can develop their innovations very broadly and are blocked by a glass ceiling.

Building stronger alliances between social entrepreneurs and the private sector seems like an obvious choice. So why are there so few examples of effective collaboration?

How Ashoka is Transforming Collaboration Between the Private and Social Sectors

Many attempts at collaboration between the for-profit and the not-for-profit sector have failed because of a lack of clear common framework, methodology, and the right governance scheme.

It took Ashoka some time (and many failures!) to understand that before even talking about doing business differently, we had to make the case to companies that it was worth investing in collaborative models with social entrepreneurs. Therefore, we decided to take a step back and to evolve our approach, explaining to our corporate partners that working with social entrepreneurs was not about doing business (at least not on the short term), but was instead about transforming their organizations to reach new markets with more innovative solutions. In order to do business differently companies have to look at the world with a new lens, be ready to rethink the way they operate and organize, and redefine traditional metrics of “success.” This shift only works if companies can form a changemaking culture internally (new skills and ways of organizing) and empower every single employee to be part of a meaningful process of change.

Ashoka’s work was dramatically accelerated by our partnership with Boehringer Ingelheim (BI), a global family-owned pharmaceutical company with which we have partnered since 2011 through the Making More Health initiative, an innovative 360° initiative that we co-created with “BI.”

This partnership is based on three major pillars that reflect the observations mentioned above: 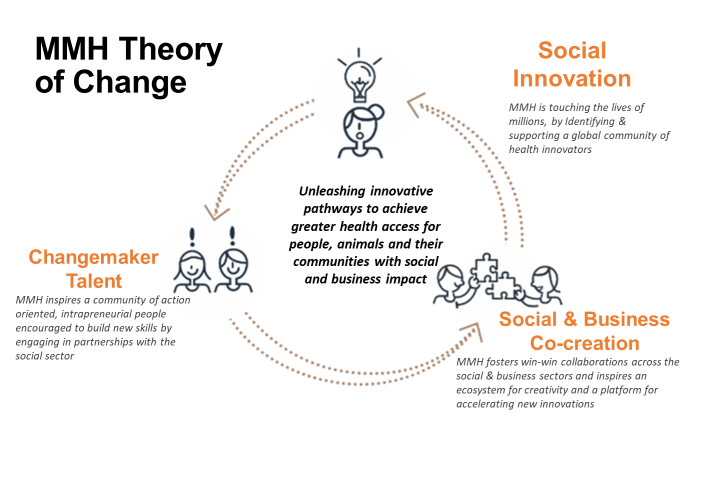 This partnership has been an insightful learning journey for both of our organizations and has helped to validate assumptions we had about the benefits of bringing social entrepreneurs together with private companies:

So far 10 million people have now accessed the various solutions that Making More Health helped to develop, and this is only the beginning. We also learned that setting a peer-to-peer type of governance between Ashoka and BI was key to sustaining such an initiative and keep the right long-term direction.

More interestingly, BI’s thinking about social impact through business has evolved from selling products to building local health ecosystems with other players (business, social, and public). For Ashoka, this partnership has had a transformative impact and helped us not only validate some of our assumptions but also replicate this 360° scheme with other companies and define a new kind of company we seek to partner with the “Changemaker Company.”

Changemaker Companies are pioneering businesses that engage in solving social and environmental problems at scale through their core business. They do this by working hand in hand with their employees, consumers, and other strategic allies, including an ecosystem of social innovators and entrepreneurs. These visionary companies shift mindsets and the means of value creation as well as leadership and management practices, setting new global standards for conducting their business.

Becoming a changemaker company is a long process that impacts all dimensions of the organization: its Human Resources policy, its innovation process, and eventually its overall strategy and purpose. We are convinced that working with social entrepreneurs in that process can have a strong catalytic effect, as social entrepreneurs, in most cases, are themselves leaders of changemaker organizations.

Our goal is now to demonstrate that this transformation process applies not only to some “happy few,” but is relevant to any type of organization, regardless of size, industry, or legal structure. This will take time and effort, and many failures and learnings. But we are committed to contributing to a new kind of economy, one that is more respectful of the mankind and the planet, and we believe that new forms of collaboration between the private sector and social entrepreneurs can help pave the way.

Arnaud Mourot is the Global Leader for Strategic Corporate Alliances at Ashoka. A former member of the French team of Olympic wrestling for 10 years and a graduate from ESCP Business school, Arnaud has been involved in the humanitarian sector since he finished his studies. He founded and led the NGO “Play International” (formerly Sport Sans Frontières) and contributed to the development of various social businesses and CSOs in France. He joined Ashoka to launch its operations in France, Belgium, and Switzerland in 2005 and is the co-founder of the Making More Health partnership with Boehringer Ingelheim. Arnaud is married and the father of three children. He is based in Switzerland.