During the Federal Elections of Mexico in 2012, in the same political moment of the conformation of movements like YoSoy132, in the search for the democratization of the media, there was also the search for access to new technological tools. Tools that allowed for the solution to issues related to transparency and accountability of organized civil society, which in most cases there was very little to nothing known about their functioning or how to put them into operation.

The premise was very clear: To create tools that would allow organizations to innovate in the matters of systematization and documentation of information, at a low-cost while being simple to use. Under the premise of allowing us to be a vehicle for innovation by not restricting the possibilities of those who use our technology, the first reporting and documentation tool of its kind in Mexico and Latin America was developed, which generated sales from its first moments to support the company’s sustainability.

During the Federal Elections of Mexico in 2012, in the same political moment of the conformation of movements like YoSoy132, and in the search for the democratization of the media, there was also a search for access to new technological tools that solved issues related to transparency and accountability of organized civil society, which in most cases there was very little to nothing known about their functioning or how to put them into operation.

At the same time, an agreement between the then Federal Electoral Institute (IFE by its Spanish initials), the United Nations Development Programme, the Federal Electoral Court, and with the support from the Social TIC (a civic society organization focused on research, training, support, and promotion of digital technology and information for social purposes), presented the possibility of solving one of the largest problems of the electoral journey as controversial as the 2012 Mexican Election -- enabling 79.4 million Mexicans registered in the electoral roll to document the electoral crimes and irregularities of those who were witnesses, before, during, and after election day -- The New Election Monitoring.

By then, many technological options were available, but nothing worked as intended. It was not just about putting a dot on a map, but to complement the information, to include images, videos, texts, locations...something that later became what we know today as Visual Storytelling and that allowed a small interaction design office to become one of the first Mexican companies focused on the creation of civic technology tools for the collection, processing, and analysis of data in real time, from any channel of digital communication, which we now know as Virk.

Although the 2012 elections project was an adventure into an unknown territory until then, due to the political situation and the scope of it, we knew that we were standing on something that, with the right vision, could have a very important impact in Mexico and in the world.

Two years after iterations by team members and partners, we formalized our operations as Virk in 2014, to the surprise of many, as a private company and not as an NGO. This led us to discover another unknown problem -- the main donors and funding organizations did not support private companies, at least not in the same way that they support NGOs. Despite our philosophy of open source software and open data, it has been difficult for them to understand the importance of us establishing ourselves as a private company. The fact that we do not have to re-invent the wheel for every project that starts and ends with a "lack of funding," something that we encounter every day and that in some ways has also been a way of validating what we offer to the organizations we work with,  made our premise very clear --  create tools that would allow organizations to innovate in the matter of systematization and documentation of information at a low-cost while still being simple to use. This enabled us to serve as a vehicle for innovation and not restrict the possibilities of those who use our technology, and under this premise the first reporting and documentation tool of its kind in Mexico and Latin America was developed that generated sales from its first moments and made the company sustainable.

Soon we managed to attract the attention of organizations such as The World Bank, Univision, ICFJ, NDI, Transparency International, and Amnesty International among others, and with this, achieve the first implementations of projects in Latin America for data visualization and reception of reports in public services in various sectors (we call them citizen reports). In some countries of North Africa and Europe, mainly for election monitoring projects; we managed our first lessons that allowed us to find the inflection point for software standardization and customization for sectors such as water, energy, education, transport and mobility, health, research, election monitoring, journalism, gender equality/equity, human rights, anti-corruption, and smart cities.

Thanks to the implementation of analysis processes, user experience, and interface design, based on interactions with clients and users, we managed to identify the basic common elements among the projects we deliver, so that today we can provide support and advice to organizations on how they should initiate, design, and implement their projects for different contexts.

We develop technological solutions based on data for a better understanding of complex social problems, allowing citizens to make decisions about the information provided, mainly by international organizations, government agencies, media, and civil society organizations, through websites and web portals, stand alone tools, or native applications for smartphones, where Virk becomes a partner of these initiatives. They have allowed us to actively participate in the development of these initiatives in order to align them perfectly to the most appropriate solutions for each. We are focused on each organization having the same capabilities as the technological giants, at a low-cost, without complicated technical training and infrastructure, in the immediate.

We created the first City OS [Operating System for Cities] and a modular ecosystem that allows municipal and state governments to have location intelligence-based tools for governance, security, and efficiency of public services. We also enabled tourist destinations in the migration to become smart destinations for tourism.

Voz Eléctrica (2013) is a collaborative project involving the Dominican Corporation of Electric Companies, the Electricity Distribution Companies (EDEs), multiple Dominican Republic civil society organizations like Foro Ciudadano, Centro Juan XXIII stand out, Toy Jarto, Allianza ONG, Participación Ciudadana, COPADEBA, Alternativa Ciudadana, and Centro Bonó among others, with support from The World Bank and Virk, for data collection that will reveal the impact on investments in the rehabilitation of specific electrical circuits.

We managed to provide citizens hundreds of reports in different channels, from web forms to call centers to twitter, and process the information through the reporting system to allow construction of blackout maps about specific areas of the country, as well as the detection of corruption cases in brigades and offices of the electricity companies in the Dominican Republic. We also managed to generate interest from public and civil society organizations, in exploring new technologies and implementing platforms similar to Voz Eléctrica to meet the needs of citizens and improve the quality of information available in various sectors of service providers. 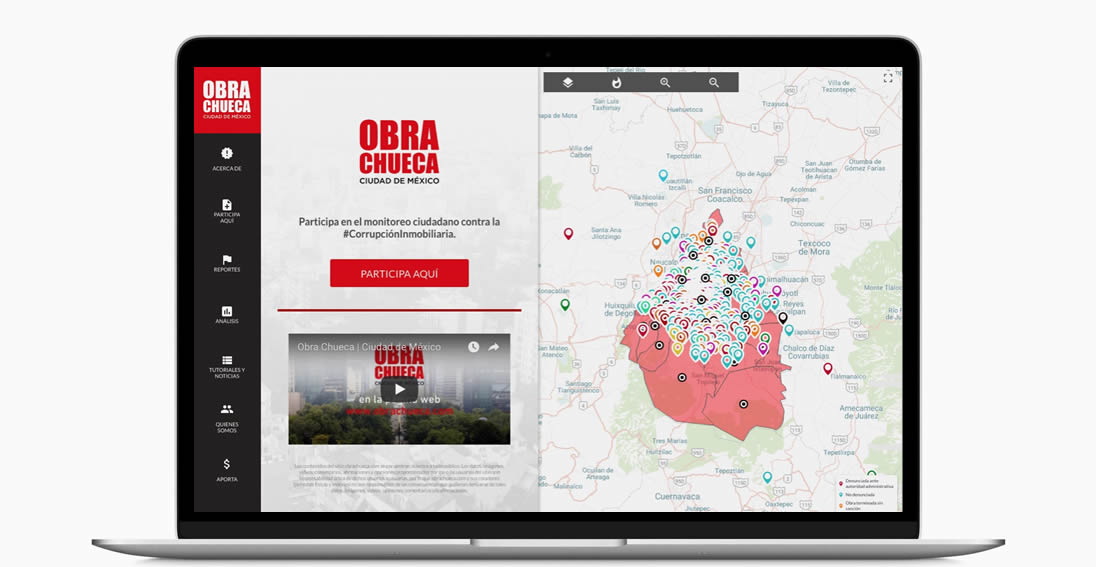 In the middle of the real estate bubble of 2017 in Mexico City, plagued by irregularities involving construction companies, real estate developers, notaries, mayors, and personalities of national politics, we created Obra Chueca: A 100 percent citizen initiative that aims to bring light to a widely known but rarely analyzed and much less transparent problem. The result of this exercise of citizen monitoring is the sum of information observed in the street and the complaints before the authorities, it indicates the geographical areas where there are irregularities and non-transparent processes which they legalized, as well as the actors who operate and benefit from corrupt practices, all in real time.

Obra Chueca received the Anticorruption Innovation Award from Telefónica OpenFuture_ and OpcionA in 2017, along with cash support to continue developing the project. Currently, there are many cities interested in implementing Obra Chueca, so we are working on the search for civil society organizations that specialize in this area to support the project in local environments.

The City Council of Cozumel (2016-2018) Mexico, with support from the National Council of Science and Technology (CONACYT), looked for proposals for the migration of Isla Cozumel towards transformation into a smart destination for tourism, where the evaluations pointed towards Virk with the option to become the First Smart Destination of Mexico and the First Smart Island of Latin America.

In 2016 we were able to diagnose the needs of the Island in technological matters, to enable web tools and apps in order to put local producers at the level of international chains of restaurants and hotels, democratizing the offer and persuading tourists through the organization of digital itineraries to extend their stay in Cozumel, increasing the satisfaction of 4.1 million tourists who visit the island each year and the political profitability of the project toward the productive sectors. We also enabled tools for transparency and for the receipt of public service quality reports, as well as digital maps based on open data to promote sustainable development that led us to win the Smart Destination Award of The Smart Island World Congress in April 2018.

During the administration 2018-2021 we will continue with this initiative, where we will also begin work on open contracting services and electronic payments for citizens, we seek to close the gap in citizen attention, not only in the tourism sector, but also for the residents of the municipality on issues such as property tax payment, garbage collection, operating licenses, and access to public tenders.

We are currently working on a new free version of the reporting software, both for cities and NGOs, which allows the implementation of this type of technology without the need for its own infrastructure and the ability to receive information immediately (cloud-based). This bet, financed thanks to the trust of our clients and with our own resources, has led us to initiate agreements with multiple municipalities to train them in the use of our technology, and thereby achieve more efficient and transparent spaces for citizens in their local organizations.

Ivan Yza is the founder and CEO of VIRK. She is an entrepreneur with more than 10 years of experience in building technology-based businesses and specializes in user interface and experience design for digital media [UI/UX for Web/ Apps / Data Visualization] for social causes and commercial projects.

For more information about Virk visit: