Interpreta’s Foundation was founded in 2016 in Santiago, Chile, to address some of the problems faced by the country’s growing migrant communities. Unlike other organizations that provide assistance-based solutions to migrants, such as communal breakfasts or Spanish lessons, Fundación Interpreta has positioned itself as a leader in innovative approaches to the issues surrounding migration, using tools of the corporate sector and technology to help solve social problems related to immigration. 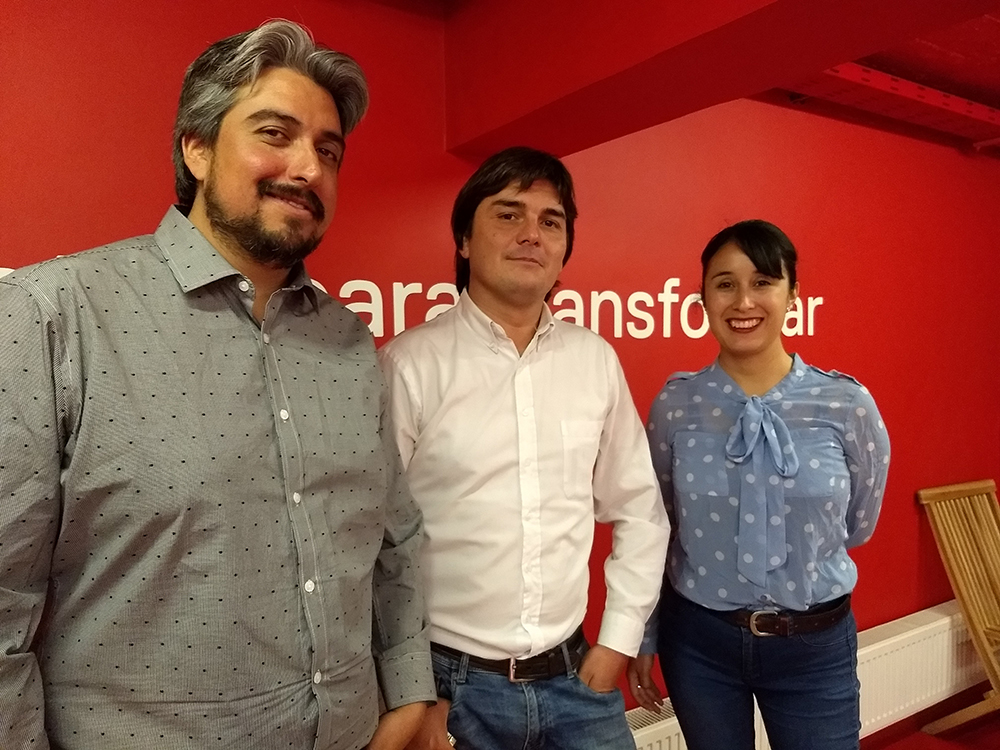 Interpreta’s Foundation (Foundation) was founded in 2016 in Santiago, Chile, seeking to address some of the problems faced by the country’s growing migrant communities. Unlike other organizations that provide assistance-based solutions to migrants, such as communal breakfasts or Spanish lessons, Fundación Interpreta has positioned itself as a leader in innovative approaches to the issues surrounding migration, using tools of the corporate sector and technology to help solve social problems.

Founders Jocelyn Gatica and Ignacio Loyola, both journalists, and Tomás Lawrence, a public management engineer, had been working in the area of communications and marketing for more than eight years advising different companies on how to improve their productivity and work environment. Working well together as a team, but tired of the corporate world, these three professionals decided to make a U-turn and start a foundation that could help solve real problems within Chilean society.

“This story began when we realized that there was a debt to be paid in our society. Migration to Chile was growing exponentially, and migrants were living in conditions of increasing vulnerability, suffering from multidimensional poverty,” says Tomás Lawrence, the Foundation’s President.

One of the most complex problems that arose with the increase in migration to Chile was the idiomatic barrier faced by the Haitian community: most Haitians arrive in the country with no knowledge of Spanish, which leads to problems accessing information about their rights and the immigration process. In response to this problem, one of the first solutions developed by Interpreta were the creation of cellphone apps T-zen, written in Haitian Creole, and Yo Migro, for the Spanish-speaking community.

“We noticed that cellphones are a vital tool for migrants, more than for Chileans, as they are a way of keeping in touch with relatives back home,” says Lawrence. “The apps offer basic information for immigrants on their arrival in the country, regarding visas, migrants’ rights, access to public health services, culture, employment, among other issues. To date, both apps have more than 20,000 downloads in Google Play.”

Interpreta started a similar initiative in November 2017, when the Chilean Government granted refugee status to 14 Syrian families. With the aim of helping them in their integration into Chilean society, and to facilitate access to information, the Foundation and PricewaterhouseCoopers Chile joined forces in the #ChileIncluye initiative, to develop an app written in Arabic, called Salam. The app provides information similar to that of Yo Migro and T-zen but is adapted to the needs of the specific refugee population, including Syrian markets, restaurants, support groups, legal assistance, and a chat group in which users can communicate with other members of their community.

Another issue that Fundación Interpreta has had to tackle is the slow production of data on issues of migration by universities and research centers and a lack of tools for monitoring discourse on the subject via the web and social networks.

In response to this, in January 2017 Interpreta began using Social Intelligence for the analysis of social networks, applying techniques from the field of big data to generate information on the subject of migration. Currently, with the use of the Brandwatch Analytics software, a tool traditionally used to monitor brands on the web and social networks, the Foundation is conducting studies on xenophobia and hate speech and searching for new ways to combat these phenomena.

Interpreta is also developing digital tools to monitor the perception of migratory movements on social networks, to better understand these processes. In particular, the Foundation carried out a study on the Venezuelan migratory crisis and presented their results at the “Brandwatch Now You Know” conference in September this year in Mexico City, considered the most important social intelligence convention in the world.

“Social Intelligence allows us to anticipate processes that affect migrants and refugees, both in the country of origin and destination. The idea is to create a bridge between people who need help and those who can give it,” says Ignacio Loyola, Interpreta’s Executive Director. “The immediacy of information allows us to react in real time, unlike with traditional media, that tends to be outdated.”

Next Steps for the Future

The next step for Fundación Interpreta is to develop a prototype for an alert system to search for disappeared people across Latin America. Doing this requires not only data collection, but also efficient use and dissemination of the information. That is why, in addition to the use of social intelligence, the Foundation is working collaboratively with a number of NGOs and international organizations to coordinate the implementation of alert-systems for lost people, assure effective response to the alerts, and measure its impact.

“We came from the corporate world, which has tools and initiatives to respond to different issues within any company. The question was: how can we could use this technology and innovation for a different purpose? That’s what we’re doing, and with the support of Fundación Nómada and PricewaterhouseCoopers Chile, we are creating a virtuous circle in which we develop collaborative, proactive, and long-term solutions, seeking always to improve the Latin American migratory context,” says Tomás Lawrence, who considers innovation to be at the very heart of the Foundation.