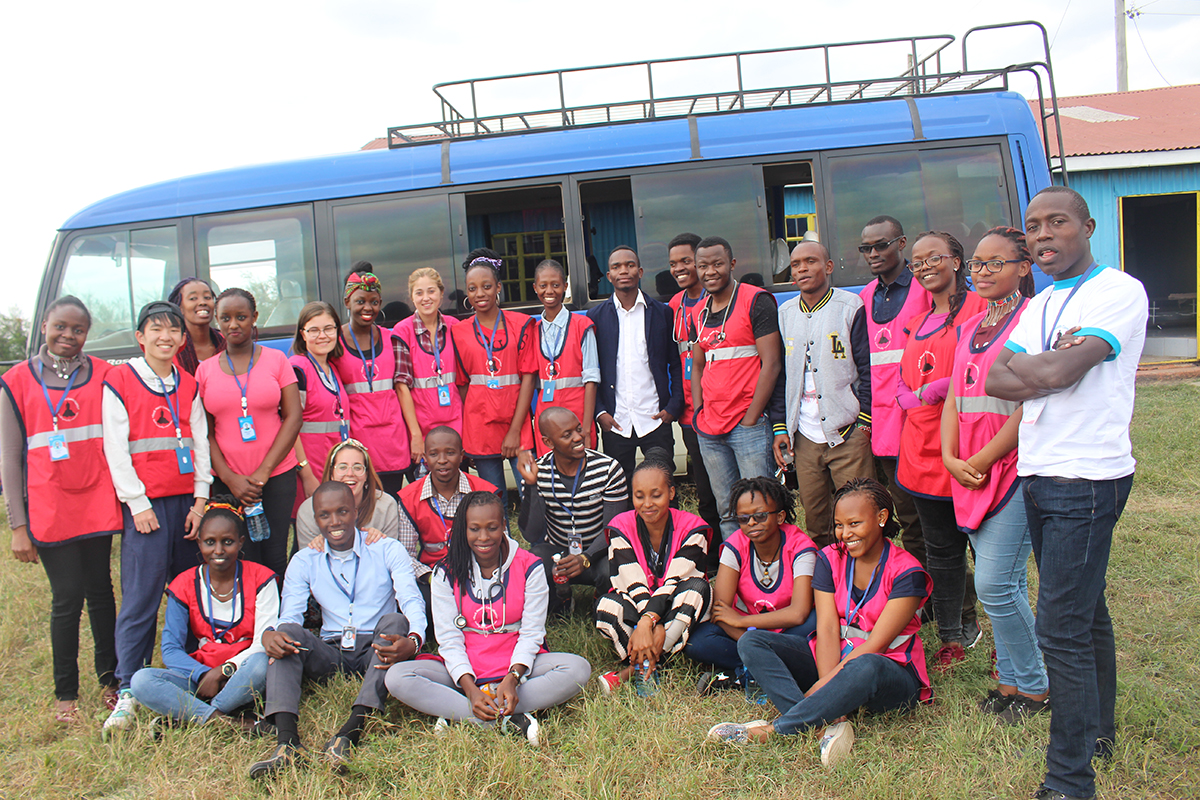 Infections have had a compelling role in human history with one of the predominance of infectious diseases being the unpredictable nature they tend towards, and the potential for an explosive effect. Experiences from pandemics such as the 2009 H1N1 influenza presented a public health emergency but most importantly exposed deficiencies and vulnerabilities in not only the global approach to the outbreak, but also the national and local public health capacities.

It is for this reason that RockHealth Integrated Care Org. (RICO) Epidemiology-Informed Resource Allocation (EIRA) Model to Strengthening Primary Health Care and Response to Communicable Disease Epidemics was designed. Through the RICO EIRA model, epidemiological data provides insight and intelligence to improve the response and preparedness beyond planning. Such data, when available at local health facilities, helps in improving the primary health care system and strengthening an evidence-based response (Brownstein JS et al, 2009)1. It targets communities with access difficulties, limited road networks and health care facilities, and high illiteracy levels in some of the most remote areas in Kenyan counties that are more prone to disease outbreaks and characterized by high mortalities.

The RICO EIRA model employs a multi-design approach with both project implementation and management driven through data collection. Such intel marks a great contribution to big data in global health as an indispensable factor in responding to the health needs of a remote population. Universal health coverage can only be achieved when the primary health system is robust. 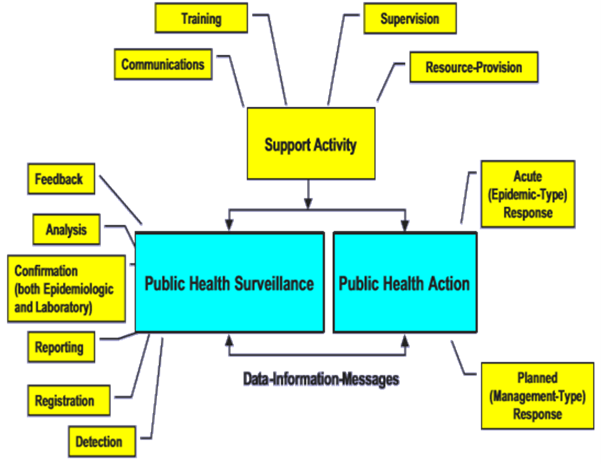 Most of the unprecedented experiences in epidemic history have largely been due to the incapability of local health facilities to mount any form of response due to lack of resources, limitations in scientific knowledge, poor health systems, and challenges in communication between local health facilities. The huge challenge behind poor response to epidemics is a weakened or a dichotomized primary health care (PHC) system (Viboud C. et al., 2010).2

On a local scale in Kenya, dichotomy of PHC has inflicted counties with high occurrences of outbreak of diseases including Malaria, Cholera, Typhoid, and viruses such as Rift Valley Fever and Marburg Viruses among others. During the 2017 Malaria Epidemic, Baringo and Marsabit Counties served as two examples. In Baringo, dispensaries were not well equipped to handle positive cases and therefore patients had to be ferried more than 150 kilometers away on rough roads and through a hilly terrain for more than 60 kilometers to the sub-county’s Hospital in Chemolingot Center. More than 15 mortalities and 400 morbidities resulted from this outbreak in Tirioko ward within Tiaty from a disease whose management is well understood. In Marsabit, more than 1,500 incidences were identified.

Recommendations made by the administrators to the government included donation of drugs and funds to build facilities in Rotu, Kapaw, Kulol, Kongor, and Chesawach locations.

These are just a few identified cases of fatalities due to a weakened PHC. It would be therefore correct to foretell that the occurrence of more of these cases with worse outcomes is probable, and in the loom if primary health care is not fortified (WHO)3. RICO seeks to identify such challenges and apply a long-term approach to the solution to strengthen health care by addressing loopholes within the existing system.

This model seeks to address the dichotomized Primary Health Care (PHC) exemplified by the poor state of Primary Health Care Facilities (PHCF), poor road and communication network systems, high illiteracy levels, and conflict in some counties in Kenya as a major hindrance to attainment of universal health coverage. The conceptual framework of the RICO EIRA (Epidemiology-Informed Resource Allocation) model, an innovation of the Scott JN et al, (2002)4 model of public health surveillance and action, offers an approach to revamping dispensaries among other dormant primary health care facilities in areas inflicted by poor PHC. 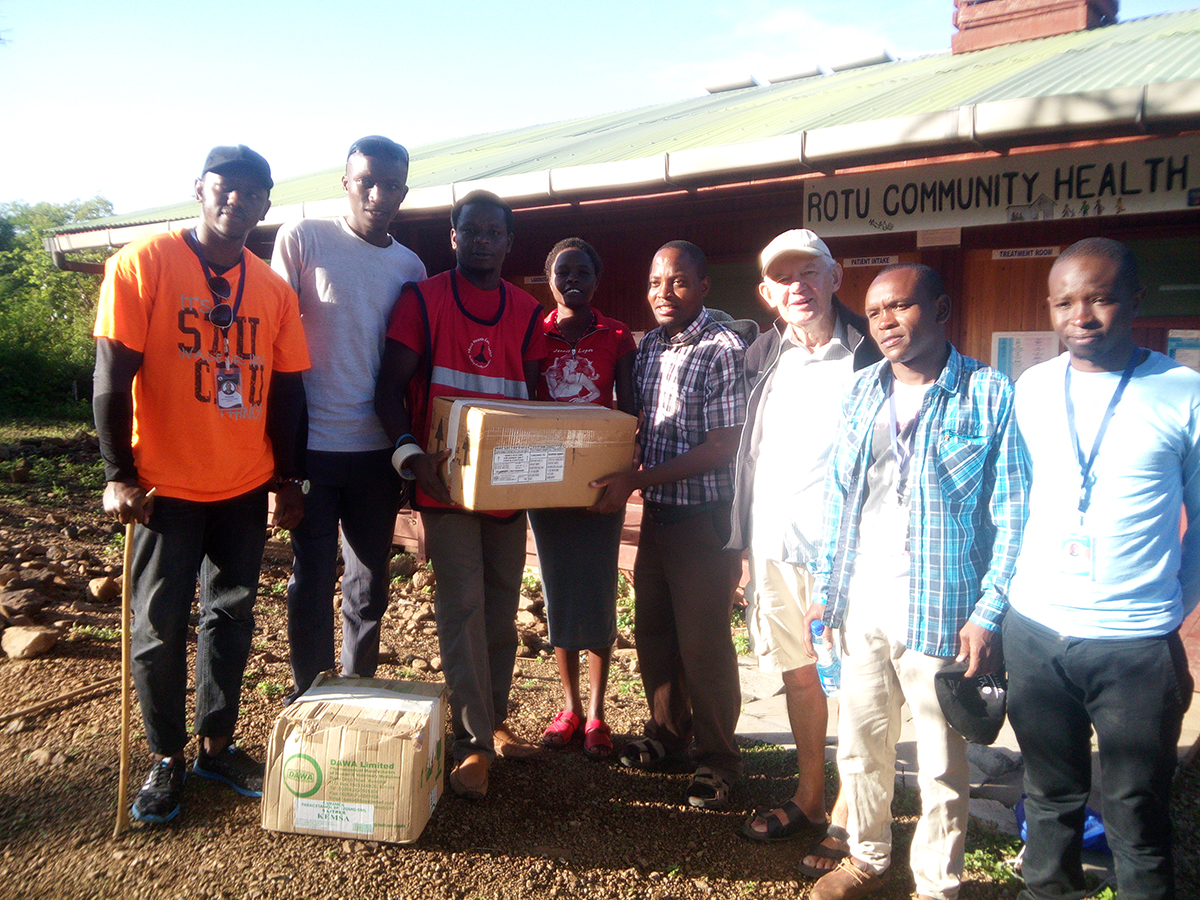 The RICO EIRA model is unique in that it offers an integrative, needs-based, community oriented, epidemiology-informed health care approach through public partnerships for the public (PPP) in the most remote areas in Kenya with a history of an epidemic. This approach has offered one of RICO’s primary stations, conflict-prone Tiaty Constituency, Baringo County, a data-driven opportunity to revamp the Rotu Community Health Unit, which previously was closed for more than half a year, and now serves about 32,000 people. A bi-phasic, multi-design method is employed. In Tiaty, catalyzed by the climate-sensitive Malaria and Rift-Valley Fever among other potentially explosive infections, a first phase pilot study by medical aid camps was conducted. The spread of the disease was determined by the prescriptions collected. This was implemented through a partnership with the County Government Executive Health Committee and resolutions made were implemented based on the data. With a huge proportion of each prevalence of disease, more than 50 percent of children under five years of age were inflicted. This raised concerns and triggered the need for allocation of a nurse to the dispensary and pharmaceutical resources by RICO in a bid to reduce the predisposition of mortality for children under five years of age. The second phase provided a follow-up and through the data collected, an evaluation of impact through comparison. The third phase provides better epidemiology intelligence to the approach and a call to action of global health actors in the diffusion and scaling of the impact. Though the model reacts to epidemics, it avoids taking a vertical and duplicative approach as this may result in redundancy and larger expenses allocated on potentially low-priority diseases. To add, its rather horizontal approach allows for allocation of adjuvant resources including a feeding program during famine and drought. 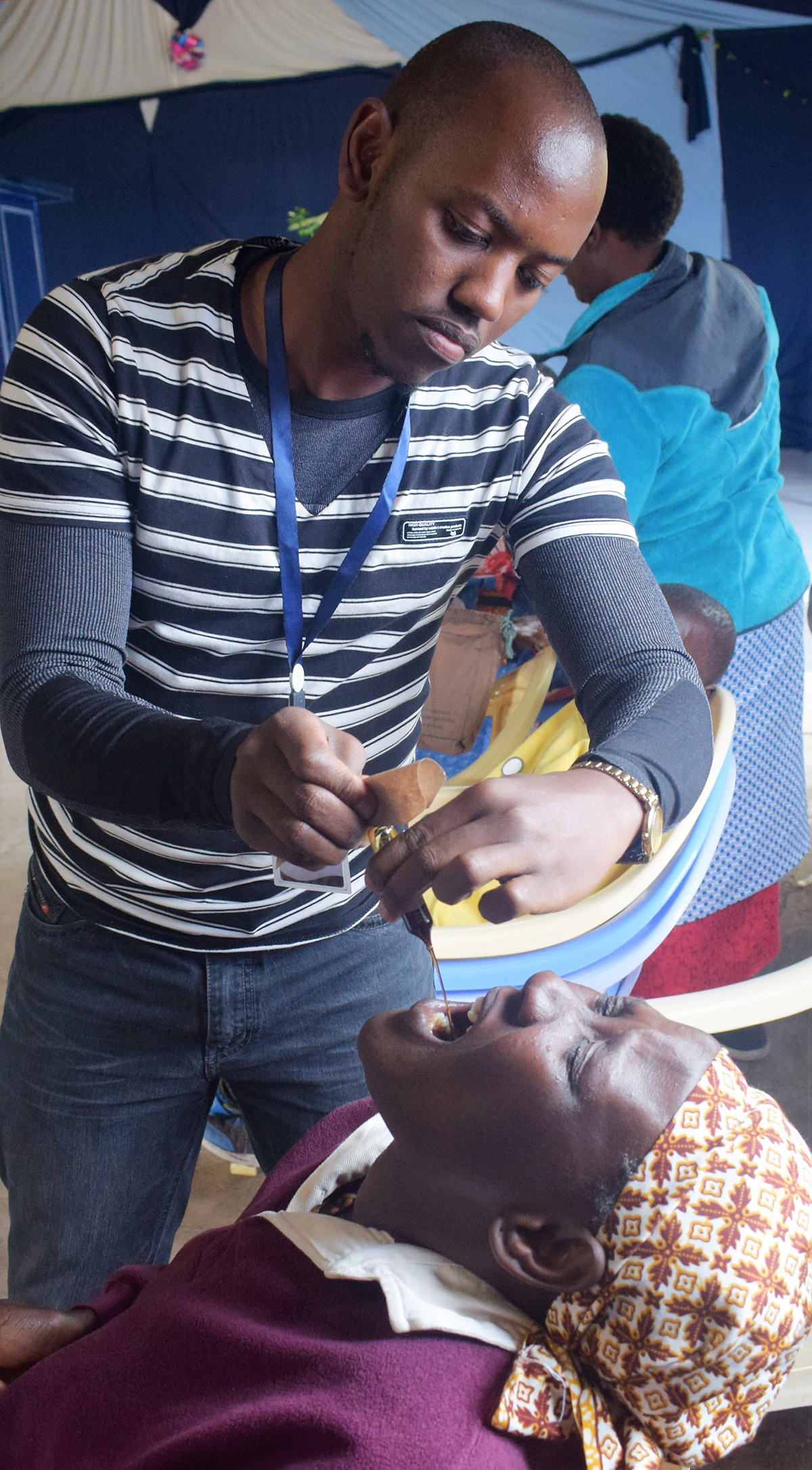 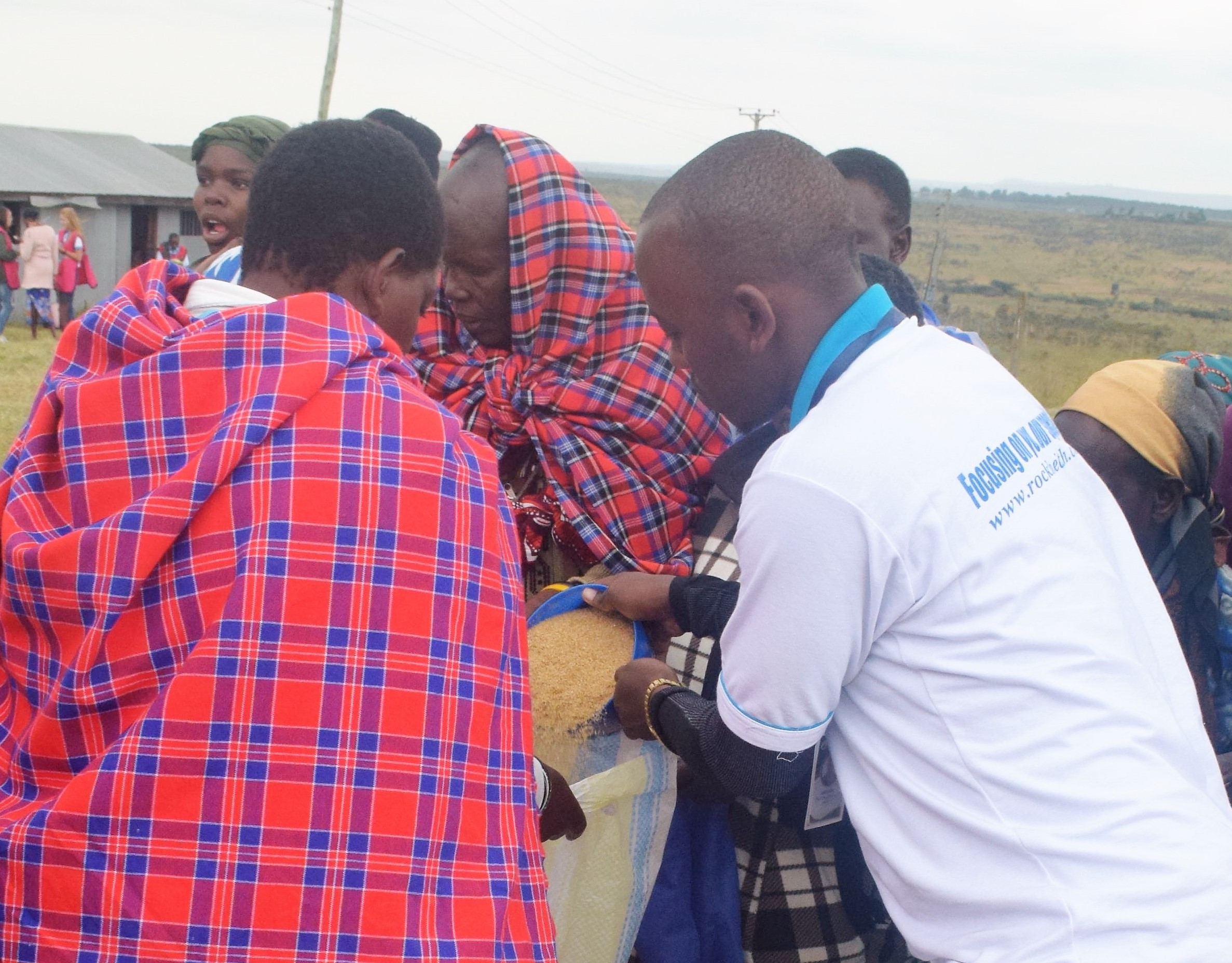 Impact of the RICO EIRA model is determined by successful dispensaries revamped or facilitated as determined by a reduction in the prevalence indices of endemic and potentially epidemic diseases, number of beneficiaries receiving treatment during medical aid camps, and indicators of a diffusing impact. The latter indicators include similarly afflicted counties and community organizations partnering with RICO to have the model implemented and PHC strengthened.

The model has in the recent past been funded by MaryKnoll Fathers and contribution from its partners, county governments, and ambassadors of the organization. However, its scale of projected impact still requires more facilitation. 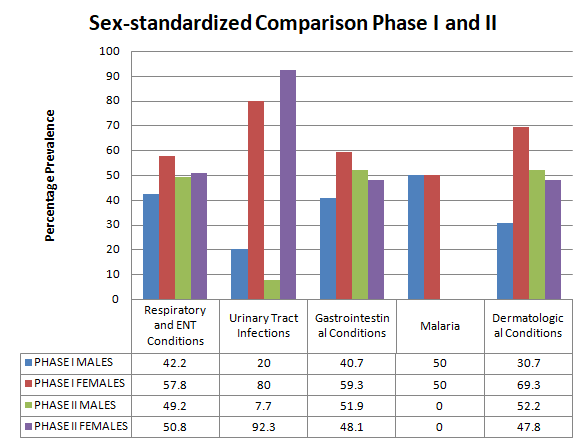 Figure 2: Sex-standardized Comparison of Prevalence Between Phase I and II Showing Decreases in Discrepancies 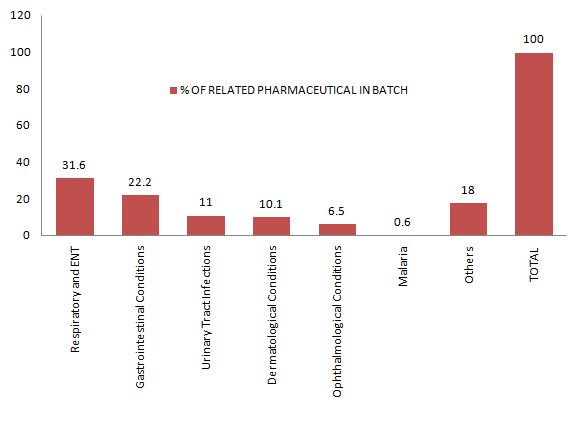 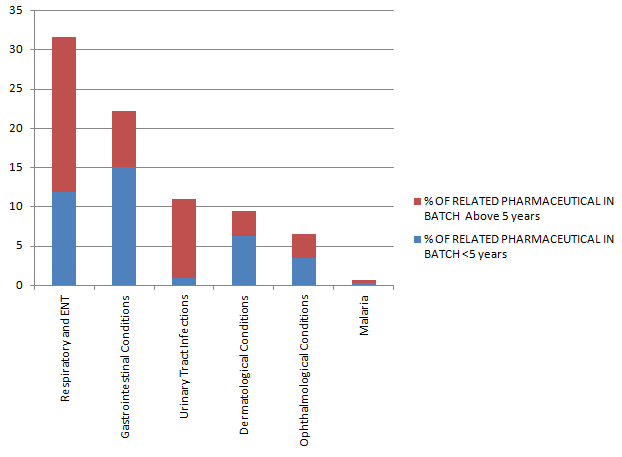 Figure 4: Percentage of Pharmaceutical Resource in Age <5 years as Determined from Epidemiology

So far, the model has served a total of 11,090 patients in seven Kenyan counties (Nairobi, Kiambu, Murang’a, Kajiado, Baringo, Migori, and Nyeri) in its medical aid camps, one revamped dispensary in Tiaty is serving about 32,000 people, seven disciplines have been integrated into the health care sector, food was donated to 10 villages, 14 job opportunities were created, 19 internship opportunities, and 12 medical volunteers from three different countries from abroad have been hosted with the opportunity to learn from this effort.

Since the RICO EIRA model seeks to bring universal health coverage closer to achievement through improved PHC, impact due to out-of-pocket expenses is an important success indictor with 2,750,320 KES calculated based on a total beneficiary count and 248.02 KES WHO estimate of primary health care costs by a Kenyan to a public primary health care facility.

RICO and its EIRA model has been recognized by the Royal Commonwealth Society (RCS), the Foundation for Advancement of International Medical Education and Research (FAIMER) and Young African Leaders Institute (YALI) for its contribution to the welfare of the community in health.

The approach that this model assumes is a working approach with the potential to scale up to a larger impact. It is the goal of this organization to build public-private partnerships with like-minded county governments and private partnerships with similar organizations both locally and internationally. With more support, more than one dispensary in Baringo County will be revamped to make up for 11 dispensaries of 27 that are currently non-operational in the area with the intent to build more in generated reports. The model would be an efficient approach to establishing primary health care facilities as it will provide data indicating dire need for such interventions. Beneficiaries will receive better health care with better therapeutic outcomes from its integrated approach and in return, mortalities will be reduced, morbidities controlled, potential epidemics averted, and epidemics quickly well contained.

2 Viboud, Cecile, Mark Miller, Donald R. Olson, Michael Osterholm, and Lone Simonsen. “Preliminary estimates of mortality and years of life lost associated with the 2009 A/H1N1 pandemic in the US and comparison with past influenza seasons.” PLoS currents 2 (2010)

Hakeem R. Kiboi, is the Chief Executive and Co-founder of RockHealth Integrated Care Organization (RICO) and a final year student in the School of Pharmacy, Complementary/Alternative Medicine at Kenyatta University, Nairobi, Kenya. As the CEO and Co-founder of RICO, he has worked to implement various projects on strengthening primary health care and response to epidemics in Kenya and align these projects to achieve the organization’s goals. While implementing this project, Hakeem R. Kiboi received an honorary award of an Associate Fellow of the Royal Commonwealth Society from Lord Howell of GuildFord through the Queens Young Leaders Program and The Queen Elizabeth Diamond Jubilee Trust for his contribution to the welfare of Commonwealth citizens. He is also a Student Projects for Health (SPFH) award winner by the Foundation for Advancement of International Medical Education and Research (FAIMER) with regard to RICO’s main project. In addition, he has been selected by the Young African Leaders Institute (YALI) and Digital Opportunity Trust British Council under its Social Entrepreneurship program. Hakeem R. Kiboi also serves as a founding editor of Kenyatta University, School of Pharmacy, PharmJournal under a grant awarded by the National Institute of Health and previously served as the president of the school’s student association.

Dr. Tirus Wachira is a lecturer of Clinical Pharmacy, School of Pharmacy at Kenyatta University and a registered Pharmacist in Kenya. He also sits on the board of medical advisors of RockHealth Integrated Care Organization (RICO) and acts as the chairman of the board. His work at RICO has enabled the medical team led by Hakeem R. Kiboi to mount legal and appropriate responses towards poor primary health care. Dr. Wachira also has been of great support in supervising the studies conducted by RICO.

Juma Theophilus Wafula is the Managing Director and Co-founder of RockHealth Integrated Care Organization and a fourth-year student in the Bachelor of Pharmacy and Complementary/Alternative Medicine program. Through his commitment and concerted cooperation with the CEO, he has worked around the clock to cast far and wide the impact of the organization. In addition, he holds an award for being the most exemplary leader in the University Student Organization (2016). Juma has also served as the chairman of the University Catholic Community where he undertook various roles; vice president of the pharmacy school student union; and contributed to the founding and development of the PharmJournal as an editor, an award granted by the National Institute of Health. He has also taken active roles in organizing and conducting student elections in the university as a commissioner where his contributions were highly applauded.