The authors state that there is no conflict of interest in this article.

This article is supported by the China Medical Board (CMB). Title of the project: “5+2+1 Joint Medical Education Model for General Practitioner. No.11-076.”

Comparison of the General Practitioners in China and Beyond

Table 1: Comparison on the General Practitioners between China and Others in 2015 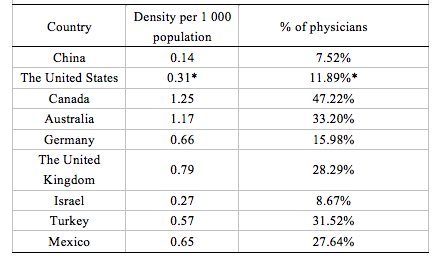 Note: Data from website of organization for Economic Co-operation and Development (OECD) and China Health and Family Planning Statistical Yearbook (2015)

Figure 1: The number of general practitioners per 1,000 population in China, 2015

Figure 2: The ratio between general practitioners and practicing physicians in China, 2013 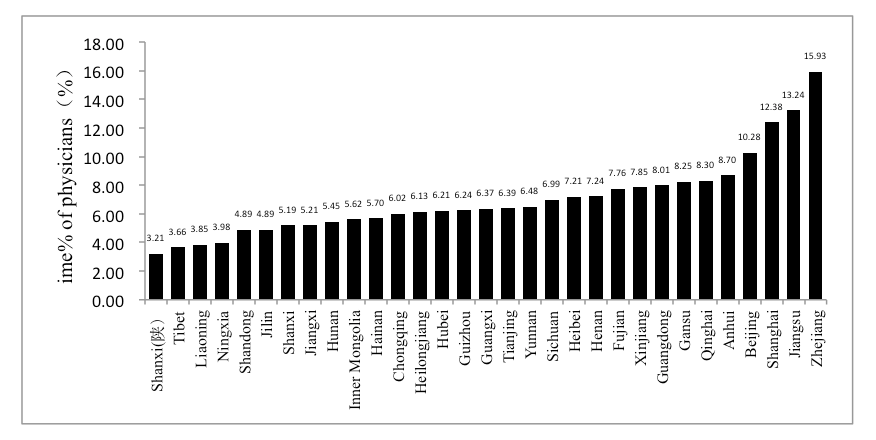 Disconnect Between Training and Employment of General Practitioners

Guangzhou Medical University explores the “5+2+1” Master of Medicine joint training model under the state-designated “5+3” clinical medical personnel training model. The characteristics of this training model are as follows.

The first class enrolled in 2012 to the master’s in general medicine program and graduated successfully in June 2015 with only one student who chose to go to the primary healthcare institution for employment. Obviously, there is a serious disconnect between the training and employment of general practitioners.

Reasons that result in training and employment of general practitioners are out of line including lack of professional honor, for example lower salary, poorer professional development prospects, and poor conditions in primary health service institutions. The main reason is the traditional pattern of interests that hinders the establishment of the general practitioner system.

On March 5, 2015, Li Keqiang, the prime minister of China proposed an "Internet Plus" action plan in the government work report in the third session of the Twelfth National People's Congress and raised it to the national strategic level. "Internet +" can break through the traditionally solidified interest pattern, refactor a new pattern of interests, achieve value-added benefits, and maintain multi-interest benefits, such as "Internet + traditional bazaar" derived Alibaba; "Internet + payment" derived Alipay; " and "Internet + private car" derived Uber.

On March 30, 2015, the State Council issued the “Outline of the National Health Care Service System (2015-2020).” The document states that the healthy Chinese cloud service plan will be implemented and gradually change the mode of health services through the share of health information between all levels of health institutions. In the meantime, it makes full use of information communication technology to promote the vertical flow of medical resources and further promote the establishment and improvement of hierarchical medical treatment models. On July 1, 2015, the State Council "Guiding Opinions on Actively Promoting "Internet +" Action" put forward 11 action plans, of which the "Internet + Livelihood Service" action plan involves the health field and encourages the promotion of new online medical and health services through the development of Internet-based healthcare services. At present, the use of the Internet in the health field is gradually being considered, as most hospitals build the “WeChat” public platform to carry out information and expand function [10]. The hospital improved the patient consultation process through Internet technology, achieved zero queues for registered visits, improved patient experience, and improved hospital operating efficiency. The characteristics of “Internet+Health” can be summarized as follows: cross-border integration, interoperability, open-sharing, process transformation, and accuracy, all of which helps to break through the traditional pattern of interest by improving accessibility and fairness of medical services [11].

“Internet+ Health” Breaks Through the Traditional Pattern of Interest

Figure 3: The traditional pattern of interests 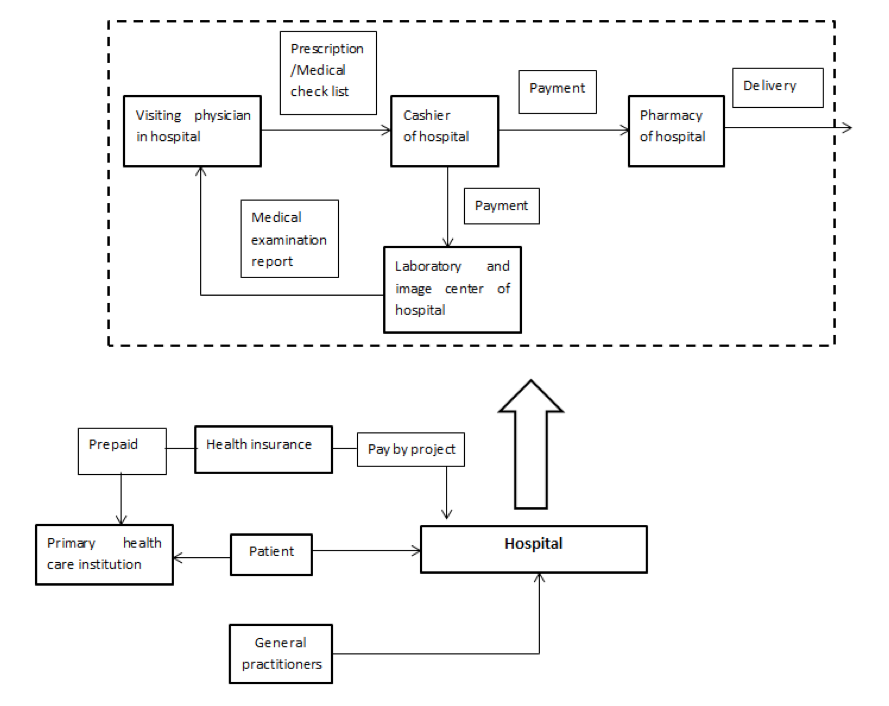 Figure 4: The pattern of interests of the first internet hospital in Guangdong province 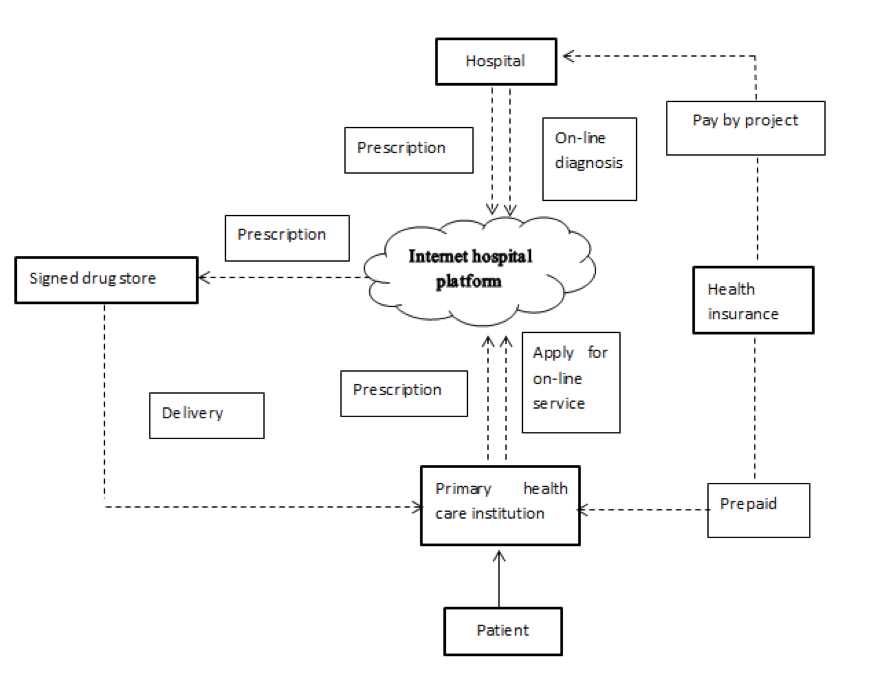 The following explores how to build a new Internet hospital platform based on "Internet +" and form a new interest pattern (see figure 5). First, general practitioners provide services to residents based on their contract. Medical insurance is prepaid according to the age, disease structure, and health status of residents signed with general practitioners. Secondly, the compensation mechanism of traditional medical insurance for hospitals is turned to DRGs. Third, under the promotion of the medical reform policy, the policy that eliminates the physicians profit from drugs will be carried out and the drugstore distribution mode implemented. Fourth, in order to share health information and reduce the operating costs of health institutions, medical imaging and other examinations are entrusted to third-party professional institutions. Under the new pattern of interest, interests for different interest subjects are as follows.

(1) Hospitals fix patient flow, improve hospital operating efficiency, and extend outpatient clinics to the community, hospitals and community general practitioners are responsible for the basic medical and health services of residents together;

(2) In the case of expanding outpatient care, the hospital stabilizes outpatient and inpatient flow, and can also conduct continuing education for general practitioners, as well as specialize in medical scientific research;

(3) Contracted pharmacies and third-party agencies have a fixed customer base to reduce the associated marketing costs;

Figure 5: The new pattern of interests baded on "Internet+" 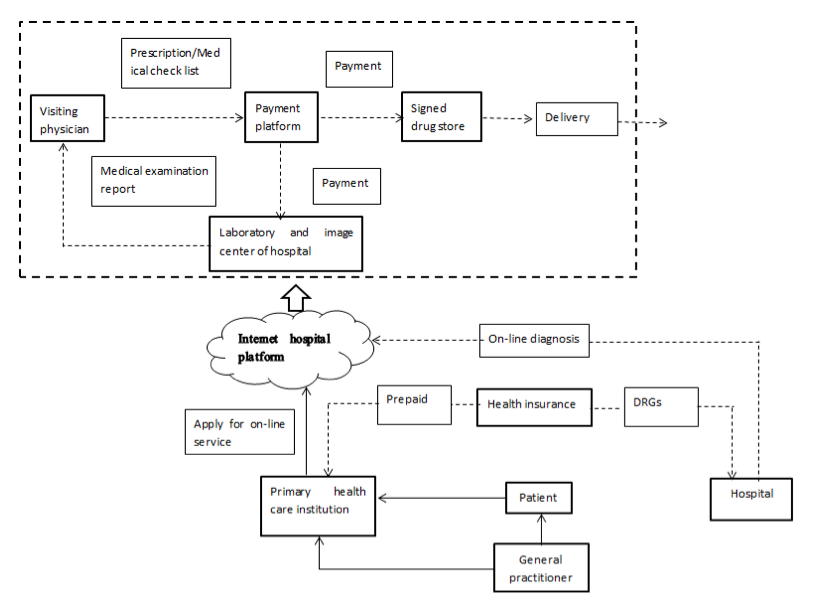 [8] Chang X. Study on the relationship among job satisfaction, career burnout and intent to stay in general practitioners [D]. Shandong University, 2015. （in Chinese）

[12] Li DZ, Wei DH, Wang LS, et al. Interests–oriented behavior of medical treatment and its restrictive mechanism from the perspective of economic man [J]. Medicine and Philosophy, 2015, 36(2a):68-70. （in Chinese）