One of the most transformative stories of the last 25 years in America is the growth of the social entrepreneurship movement. Like the tech industry, but with less fanfare, entrepreneurial problem solvers have developed powerful ideas, tools, organizations, and movements that have unlocked opportunity for millions and pointed the way towards solving some of our biggest systemic social problems in the next quarter century. Yet, achieving impact at scale bedevils changemakers. Because there is no dynamic, efficient capital market -- public or private -- for social innovation, too many approaches that could create systemic change remain sub-scale. Drawing on 20 years of experience working with more than 50 social entrepreneur-led organizations and initiatives, New Profit has developed a perspective on what it will take to create this market. It involves upending some of the conventions that have prevailed in philanthropy for decades.

Shrimp Meal and the Question of Scale

In 1996, while I (Vanessa) was traveling around the world interviewing social entrepreneurs, I stopped in a rural village in Vietnam. We were there to meet a mother who had developed a powerful way to drive down infant mortality by supplementing a baby’s diet with ground shrimp.

Our interview and the experience were moving, because the positive effects on the village were so dramatic. What happened shortly after we left changed the course of my life. Several miles down the road, we stopped at another village where, similarly to so many other places we’d visited, including the village we had just come from, we saw Coca-Cola’s iconic logo calling out to us from walls and tiny storefronts. But, we soon found out, the shrimp meal solution was missing and babies were dying at a rate alarmingly higher than just a few miles away.

One key element of the answer is that social impact has no dynamic capital market behind it to incentivize competition and innovation, respond to demand for great solutions, and lift-up those that maximize impact.

In the late 90’s, when we founded New Profit, philanthropy was operating more or less the same way it had been for one hundred years (and often still does). A few longstanding organizations had achieved national scale, while the vast majority of nonprofits never came close to crossing the $1 million revenue threshold. Funders were not focused enough on directing resources to the approaches that could get the greatest results, or on systems change approaches, where the true possibility of impact at scale lays. Grantmaking was almost entirely focused on programs and services (“buy” resources), rather than sustainable capacity building (“build” resources). Innovation was lagging. Taken together, these dynamics left a big gap between funders’ enormous ambitions and the results they were able to achieve.

We dove into those gaps with a venture philanthropy model that prioritized providing social entrepreneurs developing promising models with unrestricted capacity building capital and strategic support to help them grow their organizations and take aim at larger systems within which they operated. Over 20 years of close-in, collaborative work with more than 50 social entrepreneur-led organizations – like Teach For America, KIPP, BELL, Year Up, Health Leads, First Place for Youth, Girl Trek, and others – we have learned a lot and built on that model, arriving at a vision for creating the dynamic, efficient market needed to unleash social innovation.

At its most elemental, a functioning market would direct resources to the highest value (read: highest impact) approaches. While we have seen some progress in this direction in philanthropy over the last couple of decades, a gap still exists. For example, we see many funders taking a “fund what works” principle too narrowly as a way to focus resources on point solutions or individual organizations. This runs the risk of reinforcing the more perverse conventions of philanthropy we mentioned above that are holding back scaled impact, such as over-capitalizing programs while starving organizations for capacity building dollars. A more recent learning reveals two other risks: paying insufficient attention to the demand side of the equation, which may not reflect the views of the people or communities the innovations are in theory to serve; and assuming solutions at scale will come from organizations at scale, rather than from a portfolio of approaches that compete with, learn from, and build off each other.

To bring about dynamic, efficient markets for social impact, we have a four-part plan of action. 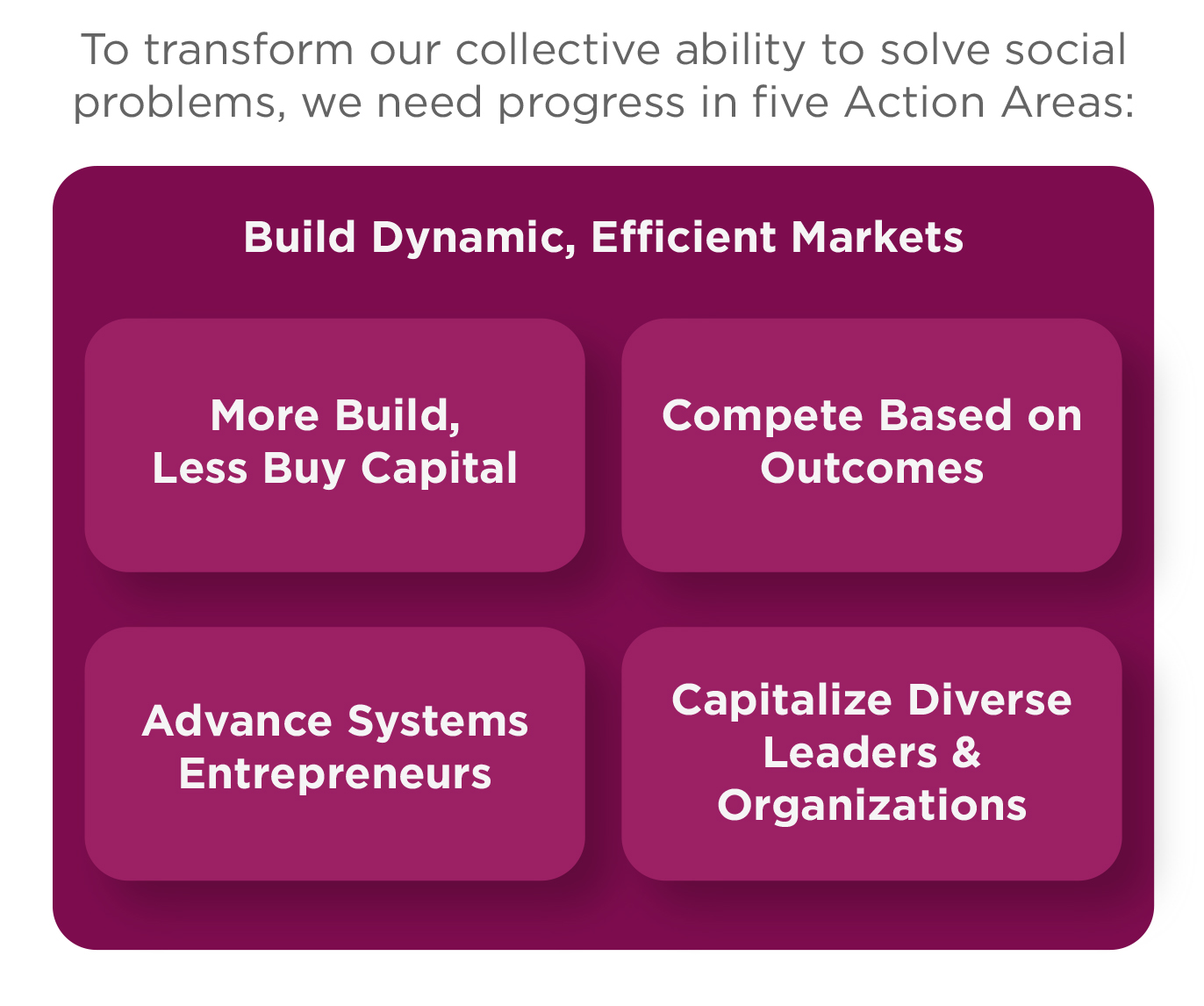 Organizations seeking to scale their impact -- whether through direct growth or systems-change levers -- need appropriately staged growth, or “build,” capital to establish and grow their capabilities (strategy, talent, skills, infrastructure, improved performance), not just revenue to fund their program(s). But the vast majority of funders still exclusively provide restricted dollars for the latter. Without an adequate supply of build capital, even the most promising approaches can’t get to scaled impact, or even invest in the capabilities to ensure they are delivering the most value to their stakeholders.

We seek to increase the proportion of build capital that funders provide, while significantly shifting funders’ awareness of the difference between the two types of capital, the structure and duration of these types of grants, the implications for measurement and evaluation, and the potential for outcome of this approach to philanthropy.

Vanessa experienced the distinction first hand when she had the opportunity to dramatically grow Public Allies, the national service nonprofit she founded before New Profit. She had public resources to expand the program to enable many more young leaders to serve, but she couldn’t find funders to provide the resources to develop the infrastructure and capabilities to run the organization at a larger scale. Philanthropic funders just wanted to provide her with more program dollars, rather than complementing government funding with growth capital to build new management systems or expand her team. As as a result, she couldn’t grow Public Allies as large or as quickly -- and her funding partners -- aspired.

Compete Based on Outcomes, Incentivize Innovation

Funding in the social sector currently relies primarily on inputs and outputs rather than on outcomes, which means that demonstrated, research-based effectiveness and efficiency is rarely the driver of decision making that it must be for sustainable change to happen.

If organizations competed for resources on the basis of outcomes, a deeper, more transparent conversation about critical questions would occur: Which outcomes matter, and to whom? What are the standards of performance (and, again, set by whom)? Ultimately these questions would themselves open up the possibility of more efficient, effective use of resources, thereby motivating innovation and ongoing adaptation. It’s worth noting that these questions would also open up a conversation about equity and inclusion in the sector itself (explained below).

As a further consequence of competing for resources on the basis of outcomes, investments in research and evaluation would become more commonplace and more responsive to the information needs of the marketplace One of our core areas of work is helping organizations build stronger measurement and evaluation approaches and communicate them to their networks, including funders.

The social sector needs to invest more of all forms of capital (financial, intellectual, social, and political) in diverse leaders and their organizations, which are often closest to the problems we confront and the communities that have the biggest stake in solving them. Making change sustainable demands devolving agency closer to the ground, but too often, the notion that there is a lack of diverse talent within the social impact sector becomes a barrier to action. We reject that premise. A greater diversity of leaders -- especially those emerging from the communities they serve -- will contribute a broader array of solutions, potentially more responsive to the needs of communities. As well, new solutions that are locally owned may be taken up more quickly and be more sustainable over time.

Scaling up individual programs or organizations can’t, by itself, ensure that results get delivered sustainably and at large scale. These kinds of approaches sit inside systems that are not reshaped by virtue of improvements in pockets. That's why advances in individual components will never, by themselves, deliver sustained, large-scale change. A new class of leader, known as a system entrepreneurs, are driving solutions that address a problem for an entire population by re-arranging how a system (e.g. a school district, a healthcare delivery network) operates.

Today’s frequent focus on organization-level metrics alone often plays out in ways that conspire against approaches that can create systemic change. The most powerful market for solutions would be one that includes systems approaches alongside programs and organizations and would reward the creation of partnerships, platforms, and policies that define what systems produce.

A vignette from our longtime partner Rebecca Onie, co-founder and CEO of Health Leads, puts some of this thinking into perspective:

[Systems thinking] is about being relentlessly honest with ourselves about how close we are or are not to actually solving the challenges that we talk about in the room. Our work began as a direct service model [with help desks in health clinics]. When we first started with New Profit, from 2010 to 2014, we more than doubled the number of patients that we served while more than quadrupling the number of successful resource connections we made. But we started to hear from the health care system “we do not want more Health Leads desks.” We literally tore our plan up…and created a new approach that was about about getting to a tipping point in which the Centers for Medicare and Medicaid Services, the largest purchaser of health care in the world, [starts paying] for the health care system to address patients’ social needs. That involves a methodical approach bringing together policy and regulatory work, partnerships, public awareness outreach, community engagement, and our on-the-ground programs.

These approaches largely represent the opposite of convention in philanthropy, which we’ve been working for 20 years to upend in many ways. We are under no illusions about the challenges involved in executing against them, but what leaves us optimistic about their potential, both alone and together, is the fact that a relatively simple change in mindset among funders especially could lead to real breakthrough change.