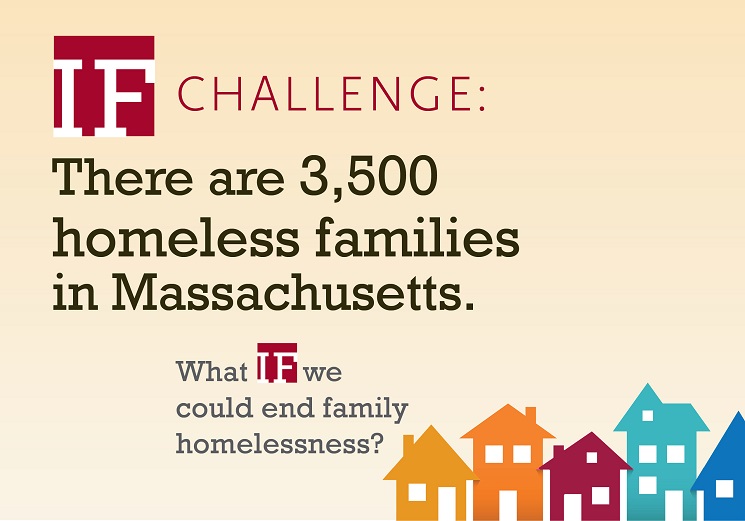 What if we could end family homelessness in Boston? What if passionate organizations with talented teams knew there were better solutions out there, but were so busy managing the daily cycle of delivering services and raising funds that it was hard to take that innovative next step? What if a funder and an academic institution could help do something about it?

In 2016, the United Way of Massachusetts Bay and Merrimack Valley (UW) and the Boston College School of Social Work’s (BCSSW) Center for Social Innovation (CSI) launched the IF Challenge to try to answer these questions.  The result was a relatively small-money investment that demonstrated existing organizations can innovate based on their wisdom, to make changes in how we address our most pressing problems.

The Scope of Family Homelessness in Boston

There are over 3,500 families experiencing homelessness in Massachusetts. They are families whose lives are already unraveled, facing not only the uncertainty of where they will live, but also how they will pay the bills and where their children will go to school.

The effects of family homelessness on children go even further. The Boston-based organization Children’s HealthWatch found recently that “children in families behind on rent were 52 percent more likely to be at-risk for developmental delays” than children in stable housing situations.1 Homeless children are also twice as likely to repeat a grade and four times more likely to develop asthma.

Objectives and Description of the Project

The IF Challenge stemmed from Innovating with Families, or IF -- a collaboration between the UW and BCSSW designed to shape new relationships between social scientists and practitioners, towards finding innovative solutions to Greater Boston’s most pressing social problems. The IF Challenge teamed the UW with BCSSW’s Center for Social Innovation (CSI) to tackle family homelessness. Its objective was to identify innovations that were, “Innovative, feasible and able to be scaled beyond one organization.”2 It further sought to demonstrate that small, targeted amounts of funding and technical assistance could help foment innovation from within existing institutions.

The IF Challenge launched in the summer of 2016, inviting nonprofits to submit “innovative proposals with game-changing ideas that address the question, ‘What IF we could end family homelessness?’” Winning ideas would be “eligible to receive up to $25,000 in funds from UW and design and development support from BCSSW.”3 The total investment between the UW and CSI was about $100,000.

Competitors were invited to answer several questions about their ideas, ranging from target population, scope, and timeline of impact, to details on implementation, such as feasibility, replicability, and cost-effectiveness. Winning organizations would receive funding and technical support to aid the development and implementation of their innovation. Sessions with CSI and UW staff would involve multiple winners learning from each other, as well as supporting learning within each organization separately. Consultation would be tailored to meet the needs of the project and the organization. A panel of six judges drawn from academia, business, philanthropy, the UW Board, and MassChallenge evaluated proposals across four criteria: likelihood of sustainability, innovation, ease of implementation, and cost-effectiveness.

Competitions have long been used as way to drive new projects or reward good ideas, and incubators have been developed to provide support for startups and entrepreneurship. While both are strong models, the IF Challenge was designed to build on these mechanisms to catalyze innovation in existing agencies. Most competitions depend on the winner to implement with little support from the funder. The IF Challenge offered not only the reward, but a level of support to help the winners further develop and implement their idea.

Intrapreneurship models work to stimulate innovation in existing entities rather than through the development of new organizations. Distinct from most incubators which focus on entrepreneurship, the IF Challenge sought to leverage good ideas in existing agencies while also giving them support to develop, test, implement, and grow innovation. Combining a competition and incubator allowed us to drive innovative thinking in existing agencies that have significant scale, expertise, and infrastructure to make an impact in the area of family homelessness.

The IF Challenge Winners

Metro Housing|Boston’s social innovation project -- the “Housing Navigator” -- leverages its existing resources and services, in coordination with other organizations, to construct a technology based, “rapid-response” vehicle for families at risk of homelessness using an innovative mobile application. Metro Housing|Boston will use the data to influence future program offerings to meet the needs of participant families. Researchers at Boston College, meanwhile, will use the research to examine the utility of mobile app-based resources for this population, and share findings with the broader research community in this field.5

In high-rent markets such as Boston, low- to moderate-income workers are at increasingly high risk of spending more than 30 percent of their income on housing costs. The Earned Income Tax Credit helps many of them reduce the gap between living expenses and wages. Utilizing data from multiple sources, Children’s HealthWatch researchers produced economic simulation models demonstrating the gap between combinations of average work income plus federal and state EITC and rent costs for every city and town in the state of Massachusetts.6 Their work demonstrates the ways in which increasing credit amounts for the state EITC would narrow the gap between available family resources and rent costs for working families across the Commonwealth.7

The hosts of the IF Challenge pooled financial and technical assistance resources to create an attractive prize that would help springboard the efforts of the three winners. Thanks to a generous donor who underwrote the challenge, the UW provided $15,000 to $20,000 for each project. Then, a team from the CSI offered technical and coding support throughout each team’s project development. The three organizations, UW and BC’s CSI were able in partnership to begin to transform these game-changing ideas into reality.

Family homelessness is one of Greater Boston’s intractable challenges. To solve it, our communities require a broad range of innovations. Some will come from new players. Existing players, however, have a great deal to offer as well. Relatively small amounts of capital, combined with technical support and an invitation to try something new can help catalyze “innovations from within” that, over time, can begin to change the very landscape of the problem, toward scalable solutions. Partnerships between philanthropy and academia are well poised to offer those supports. While a full understanding of the results will take time, the IF Challenge demonstrates the extent of the potential to make change, and the capacity of Greater Boston’s robust nonprofit sector to lead it. 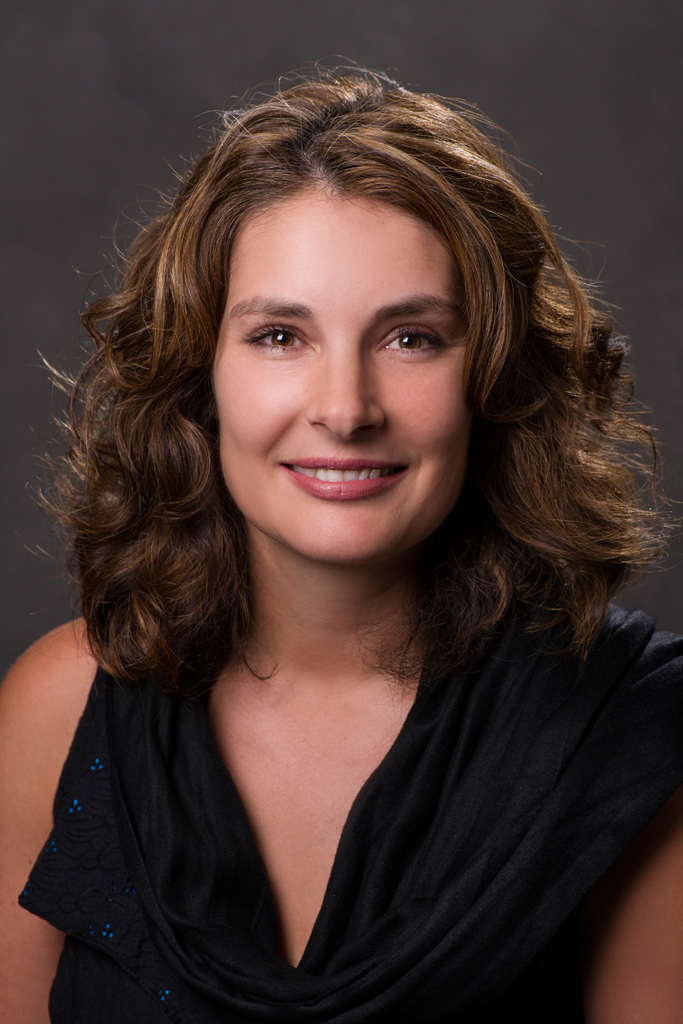 Tiziana Dearing is a Professor of Macro Practice at the BC School of Social Work, Co-Director of the Center for Social Innovation, and Founding Co-Director of Research in Social, Economic and Environmental Equity (RISE3). Professor Dearing came to the School of Social Work from the world of practice, where she led a number of anti-poverty organizations, including Boston Rising, a start-up anti-poverty fund, and Catholic Charities of the Archdiocese of Boston, where she was the first woman president. Professor Dearing also served as the Executive Director of the Hauser Center for Nonprofit Organizations at Harvard University and spent nearly a decade as a management consultant both to Fortune 500 companies and to mission-driven nonprofit organizations. She provides frequent media commentary to both local and national outlets on topics such as poverty and inequality, nonprofits, philanthropy, and social justice.

As President, Michael K. Durkin provides the leadership and strategic direction that drives United Way of Massachusetts Bay and Merrimack Valley toward achieving its vision, mission, and long-term goals for the community. United Way works to harness the power of all of us working together -- people, companies, nonprofits, and government agencies -- to deliver innovative, effective solutions, and create lasting change. Mike oversees United Way's focus on the two foundations of better lives: creating financial opportunity and educational success.

Prior to joining United Way of Massachusetts Bay and Merrimack Valley he served as president of Mile High United Way in Denver, Colorado, where he was instrumental in launching Denver’s Road Home, the city’s 10-year plan to end homelessness. A Boston College graduate, he served on the Mayor of Boston's Task Force on Individual Homelessness and currently serves on the Board of Trustees of the Cotting School.

Stephanie Cosner Berzin, Ph.D., is an Associate Professor, and Assistant Dean, Doctoral Program at the Boston College School of Social Work.  As co-founder of the Social Innovation + Leadership Program, Dr. Berzin co-led the curriculum redesign and the development of the strategic vision for social innovation education at the school.  Dr. Berzin serves as Co-Director of the Center for Social Innovation, where she conducts research and supports organizational capacity-building around innovation and intrapreneurship.  Her research and consulting work with hundreds of social sector leaders supports the development of an innovation skill-set and helps build organizational capacity for change.  As the principle investigator on more than 10 projects related to social intrapreneurship and author of more than 50 publications, her work promotes the capacity of existing agencies to respond to social issues. Complementary research examines the life course experience of vulnerable youth and the programs that serve them. 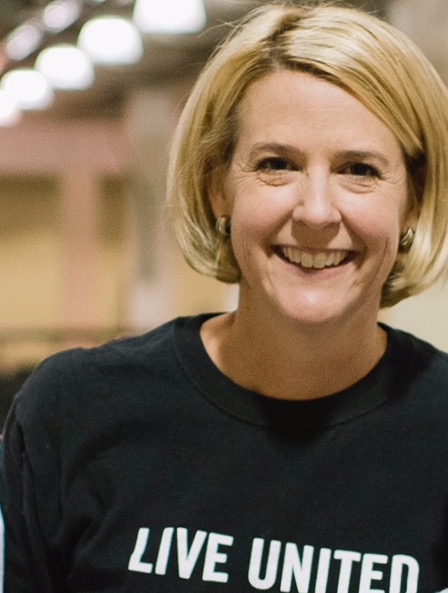 Brigid Boyd is Vice President for Communications and Public Affairs at United Way of Massachusetts Bay and Merrimack Valley. In this role, she oversees the organization’s public policy work, as well as media and communications, to help advance United Way’s community goals and raise awareness of the issues facing the region and the impact of United Way’s work.  Prior to joining United Way, she served in the Massachusetts State House, overseeing educational policy initiatives and communications for a state senator.  A graduate of College of the Holy Cross, she is currently an elected member of the Marshfield (MA) School Committee.