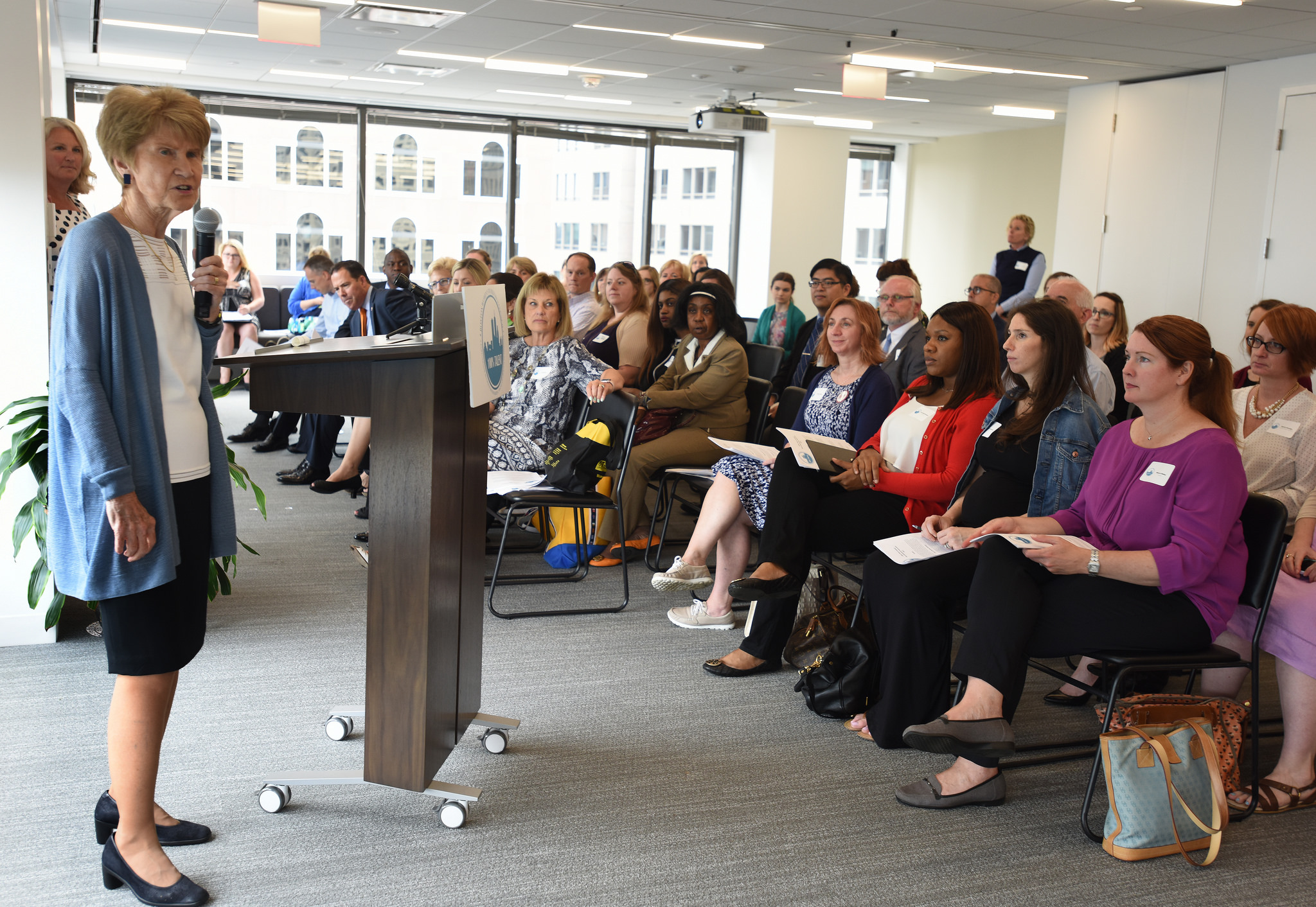 The Boston Women's Workforce Council (BWWC) is a collaboration between the City of Boston under Mayor Martin J. Walsh's administration and Boston University. Through a data-driven approach, the BWWC works to collect accurate and unimpeachable data to provide evidence of the gender wage gap and encourage membership in the 100% Talent Compact. The Compact is a partnership in which businesses pledge to take concrete, measurable steps to eliminate the wage gap in their companies. Through these initiatives, as well as salary negotiation workshops and legislation, the City of Boston provides a unique model of methods and best practices to eliminate the gender wage gap, beginning at the local level.

Women are a driving force behind Boston’s economy. With 52 percent of Boston residents female and a 51 percent female workforce, the city boasts more young women per capita than any other major metro area in the United States.1 Yet, women in Boston continue to make less than their male counterparts. The 2016 report generated by the Boston Women’s Workforce Council (BWWC) showed women earning only 77 cents for every dollar earned by a man. This inequity is more than a social justice issue; it is an economic one.2 The gender wage gap has direct consequences for the labor market, and serves as a sign of other underlying problems, including a shortage of women pursuing high-paying jobs in science, technology, engineering, and math.3

Since its founding in 2013, the Boston Women’s Workforce Council has argued that closing the gender wage gap would not only greatly benefit women in Boston, but would also help to decrease the city’s poverty rate, strengthen the local economy, and secure Boston’s status as a national leader.

The BWWC operates the 100% Talent: The Boston Women’s Compact, a public-private partnership in which businesses pledge to take concrete, measurable steps to eliminate the wage gap in their companies. To do this, the businesses also pledge to anonymously report employee demographic and salary data every two years, with the goal of creating a community wage gap against which to measure future progress.

What differentiates this program from other initiatives promoting gender equity is its strong emphasis on data. With quantifiable evidence to substantiate the findings of the wage gap, it tracks progress over time and compels companies to participate in practices to decrease the inequity. Unlike information gathered through the U.S. Census, the information used by the Compact comes from companies’ human resources records and reports on actual W2 earnings, increasing confidence in the statistics.

The Compact also serves as a resource for addressing the discrimination and other challenges faced by women in the workforce today. To date, 220 companies have signed the Compact, including five Fortune 500 companies, with new signers being added regularly. 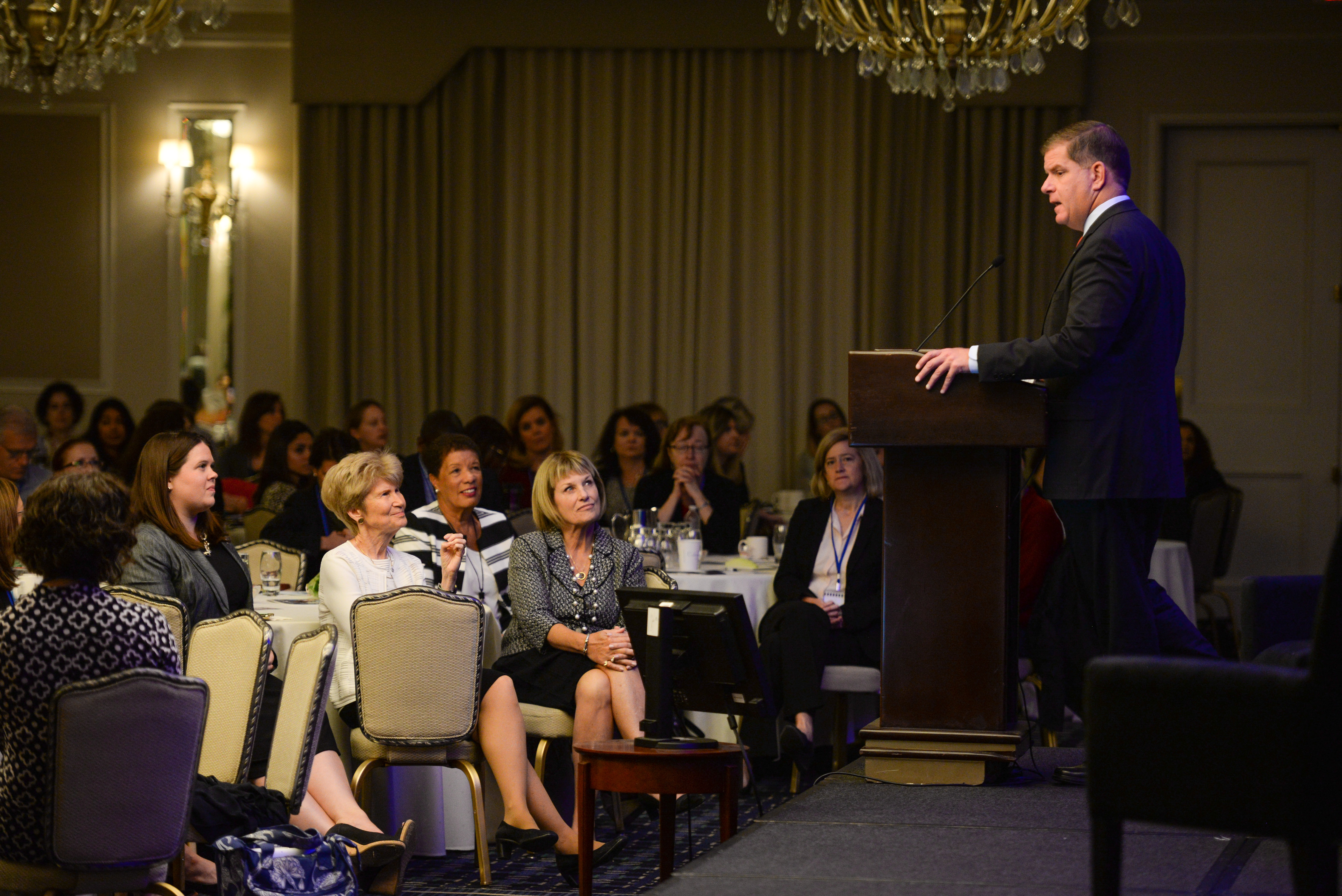 In 2013, former Boston Mayor Thomas M. Menino brought together a team of area business leaders and asked them to find the best way to advance women in the workplace. After concluding that closing the wage gap would have the strongest positive impact throughout the city, the BWWC was formed out of this working group.

When Mayor Martin J. Walsh took office in 2014, he created the Office of Women’s Advancement as a way of continuing to enhance the lives of Boston’s women. The BWWC exists as a public-private partnership between the Mayor’s office and Boston University, with the Office of Women’s Advancement serving as a liaison office. A cornerstone of this vision and department is to expand the impact and effectiveness of the BWWC, of which the executive director of the MOWA is a member.

In order to utilize the most accurate data, the Boston Women’s Workforce Council places a heavy emphasis on recruitment. In 2016 alone, membership in the 100% Talent Compact tripled, now including more than 220 businesses representing more than 15 percent of the employees in Greater Boston. The BWWC itself, comprised of 27 influential members of the Boston business community, plays a big role in engaging important local leaders in this work.

The Boston Women’s Workforce Council partnered with the Software and Application Innovation Lab (SAIL) through the Rafik B. Hariri Institute for Computing and Computational Science and Engineering at Boston University to create and implement a data survey system that enabled anonymous yet accurate submission of participation and wage data from the many Compact signers across Greater Boston. An incubator in a university setting, the Hariri Institute initiates, catalyzes, and propels collaborative, interdisciplinary research and training initiatives by promoting computational and data-driven approaches. The Institute focuses on research and development efforts emphasizing applications to benefit social good and engaging the student population, recognizing the desire of students in the computational sciences to effect change.

Compact signers are willing to provide such sensitive data because the anonymity of their submitted data is preserved. The partnership with the Hariri Institute allows for the implementation and deployment of a secure multi-party computation application that computes disguised averages for each demographic category. The data is limited to a set of zip codes from the Greater Boston Area and includes wage and demographic information, as well as reporting on cash bonuses and the level of average seniority of workers.

The BWWC also works with the U.S. Equal Employment Opportunity Commission (EEOC) to create a unique data set of employee information, used in the data analysis to assess to what degree the demographics of the reported sample match the whole of the subsection of the targeted labor market.

In 2015, the BWWC conducted a beta test with the newly designed software to ensure that the participants in the data survey were able to accurately input their data. It also served to increase confidence in the security of the system protecting the anonymity of the companies.

In 2016, data was collected regarding 112,600 employees, representing 11 percent of the workforce in Greater Boston and $11 billion in annual earnings.4 In 2017, the BWWC conducted an off-cycle data submission to include the large increase in Compact signers. 114 companies participated in the follow up data survey, representing almost 167,000 employees in the Greater Boston area and $14 billion in annual earnings. The complete analysis and report will be released in December 2017.

In addition to reporting on the wage gap in Boston, the BWWC strives to provide solutions to the unequal wages received by women in the workforce. Every year, the Best Practices Conference gathers leaders of Compact-signing companies with a common goal of improving the status of women employees in Boston. Through table discussions led by local CEOs and facilitated by McKinsey consultants, the attendees discuss specific insights into practices that can be used to create a more equal workplace for women, as well as challenges that these leaders have faced in trying to close the wage gap.

In 2016, four specific best practices were distilled from the Best Practices Conference table discussions, which formed the agenda for 2017 quarterly membership briefings. These included 1) Setting Internal Goals, 2) Building a Diverse Pipeline, 3) Prioritizing Compensation Transparency, and 4) Providing Workplace Flexibility. These topics were explored in depth at the quarterly membership briefings, which are smaller gatherings of 50-75 Compact signers, which provide a candid and detailed discussion of best practices and policies to close the wage gap.

In addition to working with businesses and employers, the City of Boston, through the Mayor’s Office of Women’s Advancement, provides free salary negotiation workshops to local women. Through a partnership with the American Association of University Women, the office has begun an initiative to provide these workshops to Boston’s working women with a goal of training 85,000 women (more than half of the working women’s population) in the next five years. As a part of the “culture” arm of this multi-pronged approach to closing the wage gap, the workshops provide helpful skills to use when negotiating wages, and aim to address the ways in which women are socialized to assess their worth in the workplace.

Mayor Walsh was also a strong supporter of An Act to Establish Pay Equity (H.1733) that passed the Massachusetts State Legislature in 2016. The law, calling for wage transparency and eliminating the salary history question on job applications, will be fully implemented in 2018.5

The 100% Talent Compact is a first-in-the-nation, city-implemented, public-private partnership specifically focused on combatting the gender wage gap. Providing a compelling model, over two dozen other city governments and Chambers of Commerce have already begun to implement this approach in their cities.

The Boston Women’s Workforce Council and the 100% Talent Compact addresses an economic issue in the Greater Boston workforce. By incorporating best practices and aggregating information regarding an important inequity, they raise awareness and provide best practices to close the gender wage gap. An innovative solution to a complex problem, the Boston Women’s Workforce Council is fighting inequity and helping to establish Boston as the number one city for women in the workforce.

Maddie Hren is the Undergraduate Intern for Communications at the Boston Women’s Workforce Council. She studies International Relations, Sociology, and Gender Studies at Boston University. She received guidance on this article from the BWWC’s Executive Director, MaryRose Mazzola, as well as the SAIL team at the Boston University Hariri Institute.