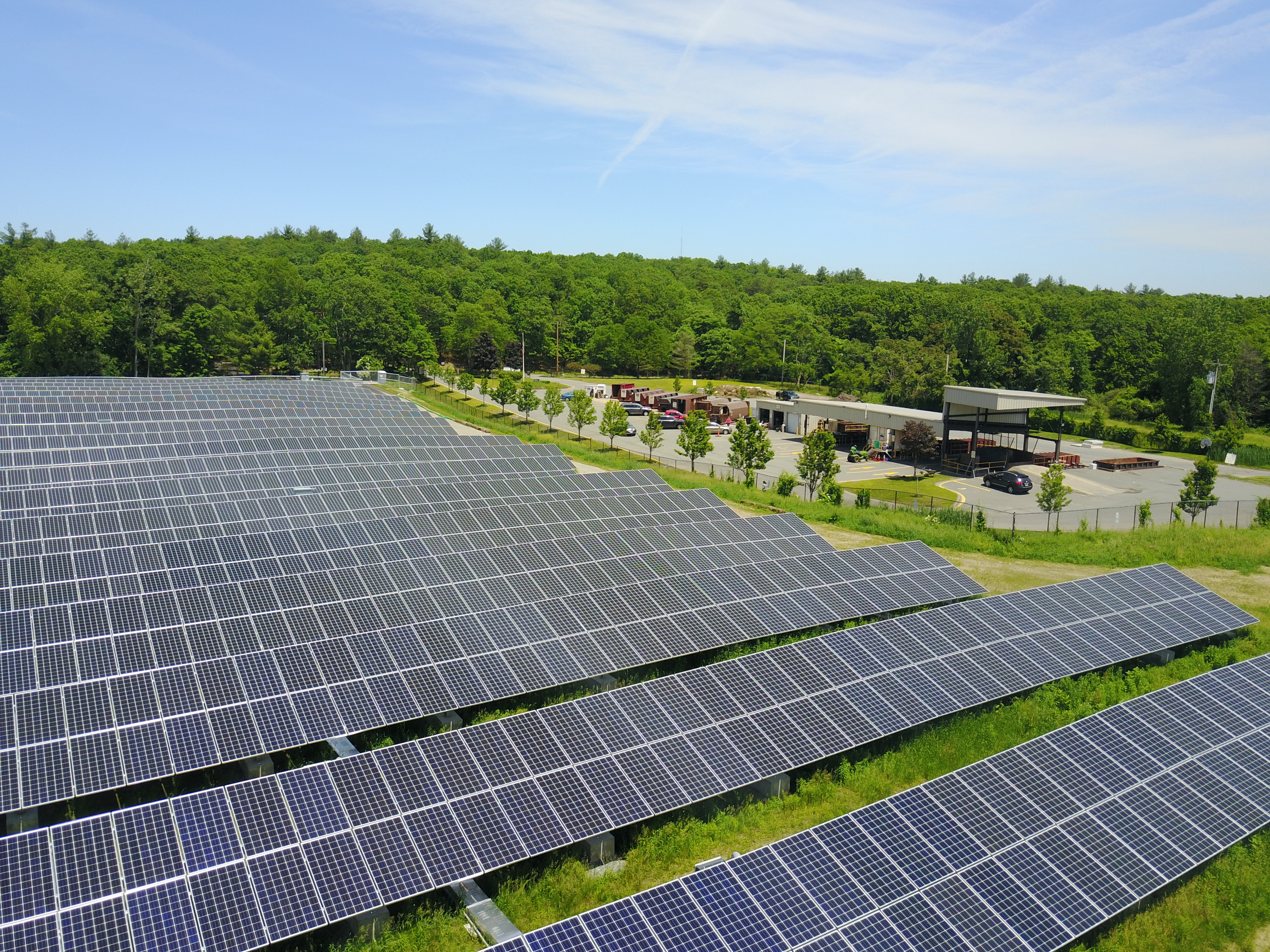 “I feel I owe it to our future generations. Climate change is very evident now, and it’s really our responsibility to try to do something to help.”

So says Paula Cohen, a retired schoolteacher from Natick, Massachusetts, and a community solar subscriber. Ever since she saw solar panels going up on her neighbor’s roof, Paula wanted to get panels for her own home. Unfortunately, her pension could not accommodate the $30,000 cost of a new rooftop system.

She is not alone. Nearly four out of every five American households cannot install solar panels on their rooftop, primarily due to factors like cost, homeownership status, financing barriers, and rooftop shading and orientation.

Last year, Paula was finally able to get her share of local solar energy, when she subscribed to a solar farm through Solstice. Community solar, which allows households and businesses to subscribe to a local solar farm and see savings on their energy costs, avoids many of the problems that confront rooftop solar, and is already the most accessible form of solar energy in states that have supportive policies. However, there are still significant barriers facing American households that seek to enroll in community solar programs.

Perhaps the most important of these barriers, and the most enduring, is the FICO score. Community solar gives customers a guaranteed discount on the cost of their energy without any extra costs; and because there is no need for any installation of equipment on the customer’s property, the risk and cost of replacing customers who default or move is relatively low. Despite these factors, financiers and project developers generally have similar FICO credit score requirements to rooftop developers, with typical minimums greater than 680.

More than half of the US population cannot meet these requirements, either because they have a credit score lower than 680, or because they do not have a credit score. Of those excluded by these requirements, a disproportionate amount are low- and moderate-income (LMI) communities and communities of color. These same LMI households on average spend more than double the portion of their incomes on energy costs than the national median; in fact, inefficiencies in heating and cooling systems and appliances mean that they often pay more per square foot for energy than their higher-income counterparts. Without innovations to drive inclusion, solar will continue to confer a disproportionate amount of its energy cost savings to higher-income Americans, leaving LMI communities out in the cold.

In approaching this problem, Solstice aimed to craft a solution that was both scalable and sustainable -- in other words, that was not dependent on local policy frameworks or ongoing support of grantmakers and impact-oriented financing. States such as Colorado have mandated that a certain portion of community solar capacity be taken by low-income customers, but it has at times been more expensive to find and enroll qualified customers than to leave those portions unsubscribed. In other cases, organizations looking to open community solar access to low-income communities have taken the approach of giving community solar away for free to LMI households. While these projects provide substantial benefits to their communities, it is likewise important to seek models that can sustainably spread these benefits to communities around the country.

This is why Solstice believes that the best way to lower these barriers is to create and disseminate an alternative to the FICO score which better represents customers’ ability to pay. Dubbed the EnergyScore, initial versions of the algorithm operate on the hypothesis that utility bill payment history and other metrics will be better predictors of a potential community solar subscriber’s future payment behavior than FICO. If successful, this metric will not only be more inclusive of bill-paying, low- and no-credit individuals (who have, to date, been excluded from community solar), but it will expand the pool of potential community solar subscribers, encouraging adoption by project developers, and facilitating further solar development.

Credit score alternatives have gained traction in countries around the world, as in the case of Alibaba’s Sesame Credit. This score is based on factors such as online transaction history and social networks, and has helped open credit opportunities to many who remain unscored under China’s national credit bureau (and who disproportionately reside in rural communities).

Developing such a score for use in community solar farm development has required a partnership between public, private, and academic sectors. Solstice has established relationships with academics versed in economics and clean energy, including Chris Knittel and Sruthi Davuluri of MIT and Chikara Onda of Stanford. Under a grant from the U.S. Department of Energy’s Sunshot Initiative, it has acquired sufficient customer data to establish a preliminary version of the EnergyScore. This includes nearly half a million anonymized bill payment and purchase histories.

The initial analysis of this data has yielded an early version of the EnergyScore algorithm, which is expected to outperform FICO both in terms of inclusivity and ability to accurately predict community solar bill payment. Analysts developed this initial version by using regression analysis on the data pool to weight existing metrics according to their relative importance in predicting bill payment performance. They used these learnings to form an optimized algorithm for use in predicting community solar bill payment behavior.

The most recent version of EnegyScore incorporates utility payment performance history and information related to the type of dwelling and subscriber mobility, in addition to a FICO component. For the 425,000 records that were analyzed, the EnergyScore outperforms the standard FICO score by reducing both false positives (people qualified under FICO who then default on their bills) and false negatives (people who are excluded under FICO but go on to be consistent bill-paying customers). In terms of expanding inclusion, the EnergyScore is particularly useful for expanding access among qualified households earning below the median annual income in the sample ($50,000).

Solstice plans to continue testing and refinement of the EnergyScore over a series of LMI-focused pilot projects. The Solstice team is currently conducting outreach to community solar farm developers across the country -- with early traction in New York, Massachusetts, and Maryland -- which are working to establish projects focused on these communities. In conjunction with LMI-oriented community outreach efforts, the EnergyScore is expected to fully subscribe these projects with low- and moderate-income households while maintaining low default and customer turnover rates in the long term.

The primary goal of Solstice’s EnergyScore is to expand LMI inclusion in the solar industry. To measure its success, it will be important to ensure that the EnergyScore predictive algorithm, constructed based on historical data, holds true in a forward-stretching and longitudinal real-world data set. To measure these outcomes, it will be important to collect demographic, housing, and personal information about project participants, as well as to measure ongoing subscriber default/turnover rates. These data will also be used to compare LMI subscriber turnover rates to the broader population, testing our hypothesis that there will not be a significant difference between the two populations.

Solstice will not only use the data collected from pilot projects to measure the early success of the EnergyScore, but will put it to use in refining the metric. There may very well be unforeseen metrics that aid in the optimization of the EnergyScore. Drawing on an ongoing supply of real-world data will allow Solstice to continuously refine and update the qualification standard, ensuring that it stays relevant to changes in the industry and the broader economy.

The EnergyScore is designed to scale with the community solar market. Its success will be shown empirically through high inclusion and low customer turnover rates, and this success is expected to lead directly to its adoption as an industry standard by the growing community solar sector. Short-term funding is still required, including the establishment of a financial backstop to de-risk the EnergyScore pilot projects. In the long-term, funding needs will be limited to ongoing data collection and analysis.

To date, our conventional energy systems have brought disproportionate impacts, from pollution to climate change, to the same communities that have seen the least of their benefits. The transition to renewable energy is a remarkable opportunity to change that paradigm, but structural issues such as credit score requirements for solar energy programs show that it is by no means guaranteed. Innovations like the EnergyScore are necessary to expand access to renewable energy and energy bill savings to the LMI communities that have so far been excluded. Only when populations across spectrums of race and economic class see equitable inclusion in these systems will our energy systems be genuinely fair and sustainable.

Forrest Watkins is a Development and Grant Writer at Solstice. Prior to his work with Solstice, he wrote about and photographed the impacts of climate change and the energy transition over the course of a year-long Princeton in Asia teaching fellowship and a two-year, 13,000-mile bicycle tour through Asia, Europe, and the United States. He graduated from Whitman College in 2014 with a B.A. in Spanish and Biochemistry, Biophysics and Molecular Biology (BBMB).