We know social capital and civic engagement are powerful drivers of opportunity and upward mobility. So how can we build these networks in low-income communities using tools in our world today?

My former middle-school student Brian was murdered in North Philadelphia a few months ago, a victim of gang violence. Alia, another former student of mine, is the first in her family to earn a college diploma, graduating this past spring from the University of Pennsylvania. She has accepted a prestigious internship in Washington, D.C.

The tragedy of Brian’s murder is palpable; his story is too common in North Philadelphia. But so too is Alia’s story. She is not the first to be catapulted from her circumstances by parts grit, luck, and immense talent. Due to her success, Alia is not really able to go back home, because home has few networks of opportunity for her.

Reflecting on my eight years teaching in and leading KIPP Philadelphia Charter School, Brian’s murder and Alia’s graduation have both had the same net impact on North Philadelphia. They are both tremendous losses to the future prospects of their community.

Those of us engaged in social innovation leadership aim to spark new opportunities so that the least among us can succeed. But our tireless efforts are not creating sustainable intergenerational networks that build and improve entire communities from within.

In 2013, with these frustrations brewing, I moved back to the Boston area with my wife and two daughters. We sought a “village” to help raise our children; my parents still live in Cambridge, and my sister had returned as well.

I immediately confronted a city of economic extremes. Boston is a city of tremendous innovation, education, and wealth. Yet, its residents face the greatest income inequality of any city in the country. Life expectancy in predominantly African-American Roxbury is 58.9 years. Just up Massachusetts Avenue the inequity is painfully clear: life expectancy in the more affluent and white Back Bay neighborhood is 84.2 years. A difference of 25 years in just a few blocks.

For more than one year I met with hundreds of Bostonians from across the city for one-on-one conversational meetings. Among those struggling, two themes emerged. First, taking extra shifts at work or second jobs resulted in a trade-off with family time and community participation. Second, Boston had no shortage of programs and resources for low-income residents, but networks of information about organizations were difficult to access and often disconnected from people who would benefit.

Low-income communities face not only wealth, achievement, and life expectancy gaps, but also a profound civic engagement and trust gap as well. The mechanisms for getting to know neighbors and working towards the collective good are not as strong as they once were in tightknit intergenerational communities. Yet still, my conversations reinforced that:

Using these observations, I launched Union Capital Boston (UCB) in 2014. UCB is a loyalty program that rewards families with low incomes for taking actions that support their own goals while also strengthening community and civic life.

Membership in UCB is a simple but powerful value proposition. We spark individual opportunities by rewarding members for volunteering at their children’s schools, participating in adult education classes, attending healthy living programs, and more. These engagement activities connect people with new organizations, networks, and opportunities.

We have more than 1,000 members who have signed up to use a simple web application to find, track, and earn points for their community engagement. Points are then converted - not into free coffee or movie tickets -- but into Visa gift cards. Members earn $200 a year on average to use however they see fit. In total, our members have earned over $300,000 since we launched just three years ago. As a non-profit, we raise our money philanthropically. 20 percent of our revenue comes from mission-driven community institutions, such as schools and health centers, that partner with us to increase their member engagement and well-being.

Is this because of our small cash reward? Clearly not. It is because we offered a new invitation to connect with community networks, get involved, and invest in improving our neighborhoods. 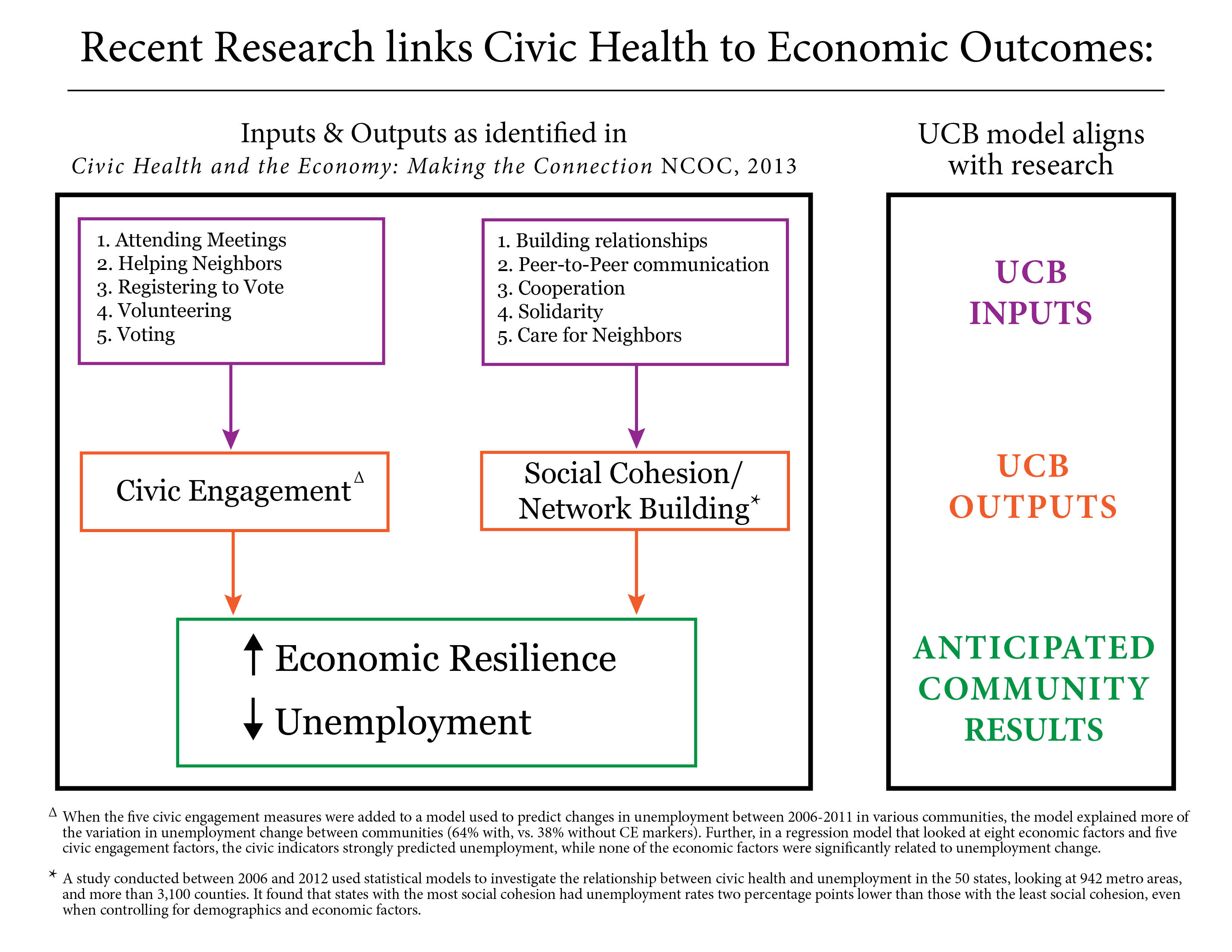 James, an early member, earned UCB Points by becoming more involved at his daughter’s middle school. He earned a $200 Visa card which he used to pay off parking tickets at city hall and get the metal boot removed from the wheel of his car. With his vehicle back, he was able to drive to a higher paying food services job and better support his daughter's education.

Jalia paid off her credit card bill. Claudia traveled with her family to New Hampshire for their first vacation in more than a decade. Julie bought a new pair of prescription glasses. Nancy bought school supplies to donate to her daughter’s school.

A member notes, “UCB has improved my life by sharing information about activities, programs, and community resources that benefit my family. I feel a part of a network of people that want to make a difference in our communities.”

“UCB has invited me to create change,” declares another member, “not just talk about it.” 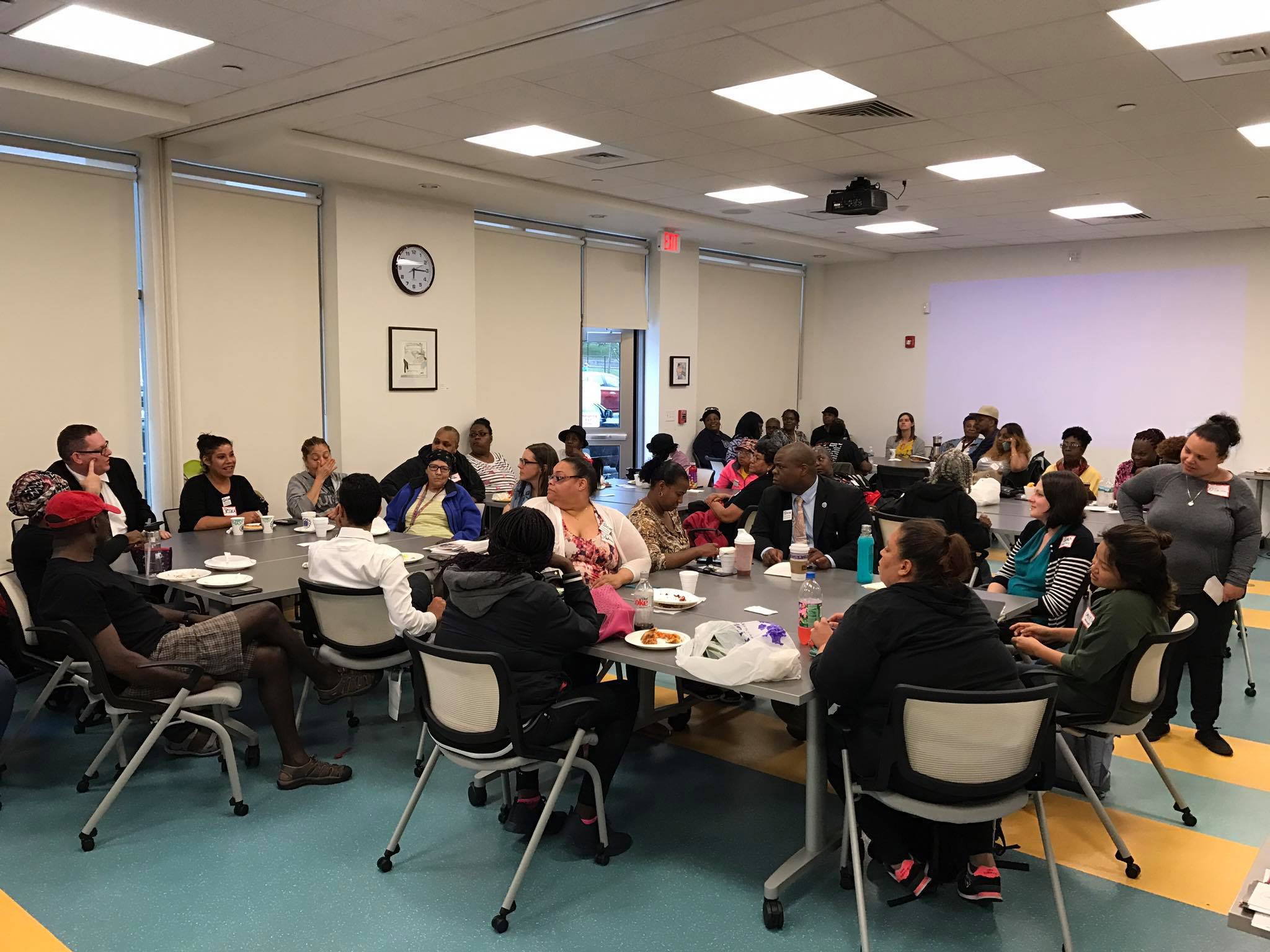 How have we achieved these results? I believe it is our compelling new invitation for civic engagement. We reward the tradeoff we have to make to step out into public life. We recognize the self-agency and networks we all need to land job interviews, support our kids in school, keep each other safe, and live healthier, more informed lives. Among UCB members we see increases in voter registration, stable employment, and greater outcomes for kids, factors which lead to more joyful, connected lives.

We know from research that greater civic engagement correlates with statistically significant declines in unemployment. We also see what happens to communities when social capital declines, when resources are scarce, when injustice pervades, and trust erodes. Brian and Alia are the pilot lights that remind me of the losses we all suffer.

At the conclusion of Evicted, the powerful book by Matthew Desmond, he quotes Alexis de Tocqueville’s observation, “It is difficult to force a man out of himself and get him to take an interest in the affairs of the whole state. But if it is a question of taking a road past his property, he sees at once that this small public matter has a bearing on his greatest private interests.” Desmond himself continues, “It is only after we begin to see a street as our street, a public park as our park, a school as our school, that we can become engaged citizens, dedicating our time and resources for worthwhile causes: joining the Neighborhood Watch, volunteering to beautify a playground, or running for school board.” (p. 294)

Union Capital Boston is a 21st Century strategy designed to address Tocqueville’s understanding about individual interests and the greater affairs of the whole. UCB’s vision brings online operational infrastructure together with community practices for real-time, real-place human networks and exchange.

Visionary Black leaders organized a bus boycott in Montgomery Alabama in 1955 without text messaging or Twitter. They built a durable network of trust and relationships that we too often lack today. Imagine what we can create with today’s technology when we refocus on building public relationships and reimagine our shared public spaces as incubators for networks of opportunity.

Brian should not have died at nineteen. Alia should not have to leave her neighborhood in order to prosper. The systemic oppressive realities dictate these outcomes. By reorganizing and energizing a new network for civic engagement I believe that our collective outcomes, both individual and communal, can improve. It is the social networks we cultivate together that build sustainable pathways of power and opportunity.

Eric Leslie is the founder and lead organizer of Union Capital Boston - unioncapitalboston.org