Poverty is not just an income problem. It is also a wealth problem. All people need opportunities to invest in themselves and in their children in order to move their families forward. Yet, anti-poverty programs in the U.S. have, traditionally, done very little to promote wealth-building among the families they serve. The Family Self-Sufficiency (FSS) program, a program of the U.S. Department of Housing and Urban Development (HUD), which serves residents of federally subsidized housing, is one particularly powerful opportunity to change that trend. For the past seven years, Compass Working Capital (“Compass”) -- a national nonprofit financial services organization headquartered in Boston, Massachusetts -- has implemented and expanded an innovative, evidence-based model for the program that is helping to show what this program can really do.

Tanya Febrillet is a single mother of two teenage children. She lives just north of Boston in the city of Lynn, Massachusetts, works full time, and, until recently, had been receiving housing assistance through her local public housing authority for several years. Like many families in the subsidized housing and welfare systems, Tanya was getting by -- but she very much wanted to get ahead and build a better life for herself and her children. Tanya’s dream had always been to own her own home. But she believed that owning a home was not, in her words, “for families like mine” -- that is, a single, low-income mother who lived in subsidized housing, and grew up in a family where no one had ever been a homeowner. 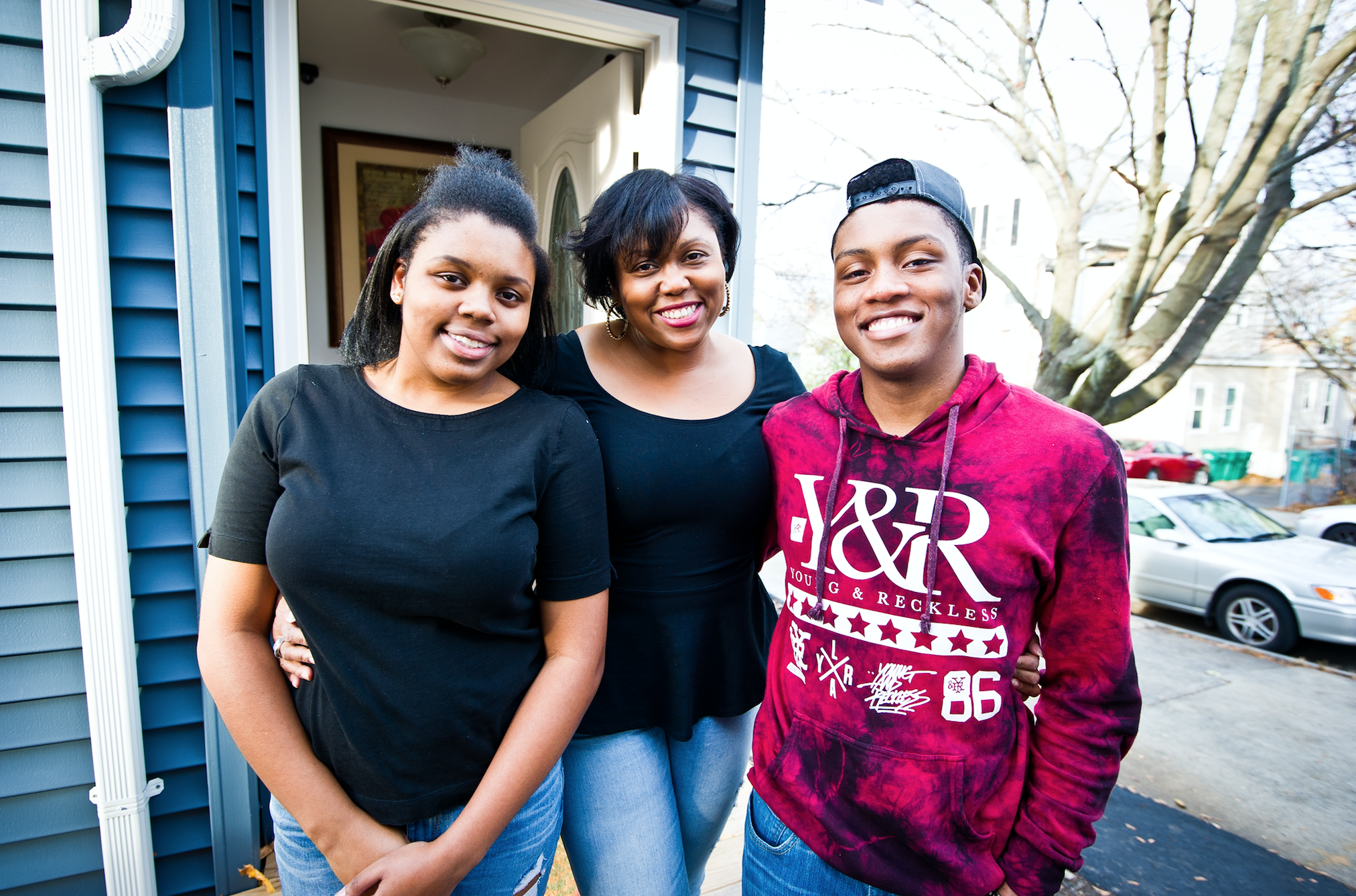 Tanya Febrillet, a graduate of the Compass FSS Program operated in partnership with Lynn Housing Authority and Neighborhood Development, with her two children on the front steps of the home that she was able to purchase at the end of this program.
Photo Credit: Geoff Hargadon

There are so many families like Tanya’s in Massachusetts and across the country who have similar hopes and dreams for the future -- whether that be to own a home, to invest in their own education or that of a child, to save for retirement, to start a small business, or another goal. While our subsidized housing system provides a crucial safety net for many families, there is more we can do to leverage this assistance as a platform for economic mobility. For many families in the subsidized housing and welfare systems, rules actually discourage and penalize savings, creating traps that make it more difficult for families to reach these goals and lift themselves out of poverty.

One such “poverty trap” exists in subsidized housing. Households receiving rental assistance typically pay about 30 percent of their income toward rent -- a policy designed to ensure that assisted households pay a fair, but affordable, share of their income for rent. The unintended consequence of this policy is that it may create a disincentive for families to increase their income, because working more means paying more rent and possibly losing other benefits tied to income, a structure which also makes it more difficult for families to build savings.

In 1990, Congress introduced the FSS program to address this disincentive, with the aim of better promoting employment and savings among households receiving federal housing assistance. As families work more and earn more money, the FSS program allows them to capture the increased portion of their rent payment in a savings account, held in escrow by the housing authority. The program essentially converts increased monthly rent payments into a monthly savings deposit.

There is no other anti-poverty program like FSS in the country, one that provides a built-in savings account to participating families. It is the federal government’s largest asset building program for low-income families. And yet, despite its potential to help lift families out of poverty, FSS has been underutilized around the country. Only 71,000 families participate each year, even though an estimated two million families are eligible. The reasons for this are varied. Resource strapped housing authorities struggle to market the program and HUD provides limited dollars for FSS program staff. But, most importantly, housing authorities lack the resources and expertise to unpack the program’s true wealth building potential.

And so, in late 2010, Compass became the first non-profit organization in the country to launch a new asset building and financial capability model for the FSS program. While HUD frames the FSS program primarily as an employment and savings program, Compass hypothesized that a wealth building model could drive stronger results for families and expand the program’s scope and impact around the country. The Compass model incorporates client-driven financial coaching and education, along with the strategic use of the FSS escrow account, to advance household economic mobility. Instead of a more traditional case management or referral model, Compass’s highly trained financial coaches work with subsidized housing residents, like Tanya, to set and reach their financial goals, establish budgets, build credit, pay down debt, access high quality financial products and services, and build savings in the program that can then be used toward those financial goals.

These programs are funded through a combination of contractual revenue from the housing partner paid to Compass, and outside philanthropy, which has enabled Compass to more robustly market the program and provide these financial coaching and education services to a larger share of families than would be served in a typical FSS program.

In 2010, Tanya enrolled in a FSS program operated through a partnership between her housing authority and Compass. Over the course of five years in the program, she paid down her debt, increased her annual income by nearly $8,000, improved her credit score by more than 140 points, and built over $3,000 in savings. Tanya graduated from the FSS program in 2015 and achieved her dream of becoming a homeowner -- the first in her family ever to do so.

Tanya’s accomplishments are consistent with the impact of the program model overall. In September 2017, Abt Associates, a global research firm, released the final results of a rigorous, multi-year, and quasi-experimental study of Compass’s FSS programs operated in Lynn and Cambridge, Massachusetts. The study found that after an average of 40 months in the program, participants earned more and received less welfare payments than their matched peers. In fact, participation in a Compass FSS program was associated with an average increase of $6,305 in annual household earnings. Participants also achieved positive credit and debt outcomes that exceeded benchmarks, including an average decrease in derogatory debt of $764.

Building on the success of these early program sites in Lynn and Cambridge, Compass has expanded this model to ten sites in Massachusetts, Connecticut, and Rhode Island. In September 2016, Compass launched a National FSS Network, with support from national funders, to train partners to implement aspects of the Compass FSS model in their local communities. Network partners currently include public housing authorities, nonprofit and for-profit private housing owners, and nonprofit organizations that partner with housing providers to operate the FSS program. These partners receive training and ongoing technical assistance from Compass to either launch a new asset building FSS program or to integrate financial coaching and other asset building strategies into an existing program.

The FSS program has also attracted renewed attention in Congress, where it has enjoyed consistent bipartisan support since it was first created. In June of this year, a bipartisan group of Senators introduced legislation to streamline and improve the FSS program. The bill would take steps to promote further uptake of the program among eligible providers and participants, and also foster further innovation to expand the program’s scope and impact. A companion bill is expected to be filed in the House of Representatives, following on a recent hearing about the FSS program in the House Subcommittee on Housing and Insurance.

What the success of the Compass FSS model ultimately points to is the key role that financial security -- in the form of savings and assets -- plays in breaking the intergenerational cycle of poverty, by supporting families to increase their wealth over time and across generations. The changes that Tanya made to her income, debt, and credit, when combined with the savings she built in the program, put her in a more secure financial situation and positioned her to reach a major financial milestone.

Early data suggests that a model like this also has a strong return on investment. Again, Tanya’s story provides a compelling example. Before joining the FSS program, she was receiving a monthly housing subsidy of $625. Today, the housing authority is able to redeploy that subsidy to serve another family in need, and Tanya is now contributing to the local tax base as a homeowner. And although it is harder to measure, we also know that Tanya is now teaching and inspiring others around her – her children, extended family, and neighbors -- to manage their finances and save for the future.

Sherry Riva is the Founder and Executive Director of Compass Working Capital. Sherry founded Compass after more than a decade working with various direct service organizations that served low-income women and families, including several years running a transitional shelter for women in Seattle, WA. Sherry is a Draper Richards Kaplan Social Entrepreneur and a GLG Social Impact Fellow. Sherry received an A.B. from Princeton University, an MPP from the Kennedy School of Government at Harvard University, and a Master's in Philosophy (Ecumenics) from Trinity College Dublin.