Financial inclusion is a defining challenge for this generation. Many governments and supranational agencies are investing to solve this problem. Even fintech companies are trying to help, but what is the real problem and how could it be solved?

The World Bank states “Around two billion people don’t use formal financial services and more than 50 percent of adults in the poorest households are unbanked. Financial inclusion is a key enabler to reducing poverty and boosting prosperity.”

There are many reasons why this is happening but there’s one in particular that EFL, as a company, addresses. Financial institutions’ risk practices define which clients they serve based on their risk appetite. Current risk practices are mainly based on credit history and proof of income. If someone has been paying a loan it is likely they could get a new loan just because they have good credit behavior. But, if he was never able to get a loan before, what can he do? In the formal economy, he could show proof of income and capacity to pay but this is not possible for an important part of the population in many countries.

The problem in many emerging markets is that a substantial portion of the population does business in the informal economy. They lack the two main ingredients financial institutions need to assess creditworthiness: proof of income and a credit history of past and current financial obligations. Because of this, traditional risk assessment methods won’t work and borrowers outside the formal financial system will be rejected. There’s a clear need for new approaches.

At EFL, we are working on a different way to assess creditworthiness with alternative data. Alternative data could include cell phone records, social media, utility payments, mobile phone data, and more. But, to reach anyone who is currently underserved the most inclusive solution we have found is psychometric and behavioral sciences.

Over more than 10 years, EFL has developed a credit assessment that allows financial institutions to better understand applicants and make better credit decisions. The assessment is constantly evolving and improving. It started as a multiple choice test taken with pen and paper and has become a gamified, digital assessment. The most recent version has a median completion time of 15 minutes and varies from six to 10 sections.

There are two main challenges we face in using alternative data for credit assessment:

Because of these challenges, the design of the EFL assessment centers on three guiding principles:

The EFL assessment allows us to capture more than 25 personality traits. The most relevant are locus of control, fluid intelligence, impulsiveness, confidence, delayed gratification, and conscientiousness. These traits let us identify applicants who are likely to repay their loans.

Impulsiveness, the trait of acting on impulse without thinking, is measured in many exercises within the EFL assessment. One clear way to see impulsiveness within the assessment is the Speed Match Exercise. In this module borrowers play an interactive game that involves quickly clicking through a series of images and selecting whether or not the image matches the previous image. (Original module design inspired by Sternberg et al. (2013) and Morrison et al. (2015) ) 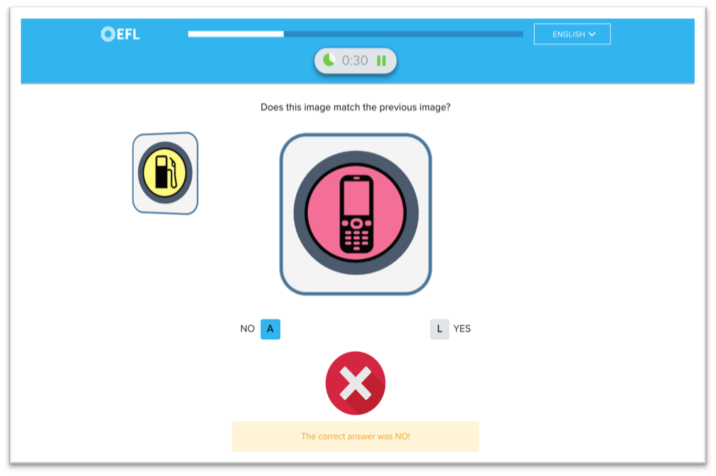 (This is just an example; in the real exercise, the applicant sees only one image but not whether or not their choice was correct)

Applicants are instructed to evaluate 20 images in a specific time window. This generates an environment where the applicant needs to decide whether to move faster and make mistakes, or move slower without making errors but not complete all 20 images.

Our data has shown us that applicants who move faster with an impulse to finish the application and get wrong answers are more risky borrowers than those that take more time to answer with fewer errors. Figure 1 shows how impulsive applicants have higher default rates than other applicants. The relationship between the trait and default remains stable and impulsive applicants are as much as three times more likely to default than non-impulsive applicants. Data comes from two different financial institutions in two countries where EFL has been deployed. The first chart is from a Latin-American country and the second one from an African country. 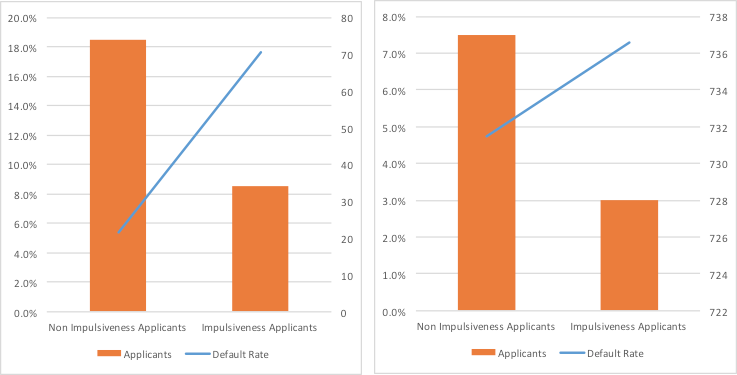 EFL measures delayed gratification, or the ability to delay something now in order to get something better in the future, through the financial tradeoffs module. This module primarily estimates the customer’s temporal discount rate by measuring the amount of money she would be willing to forego to receive an immediate versus delayed payoff. Applicants demonstrate their financial preferences by making multiple selections between an immediate hypothetical reward and a larger delayed reward. (Module designed in partnership with Hal Hershfield (UCLA). Initial module design and estimate elicitations from Weber (2007), Weber et al. (2013), and Meier and Sprenger (2010)) 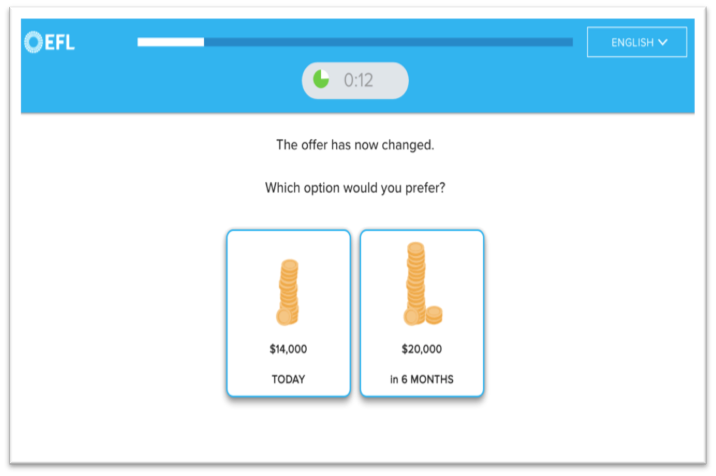 Discount rates are measured in different rounds for different delays. Temporal discount rate (as measured in the module) has been found to be correlated to things like savings rates, (not) smoking, healthy diets, and other "future-self" oriented behaviors. 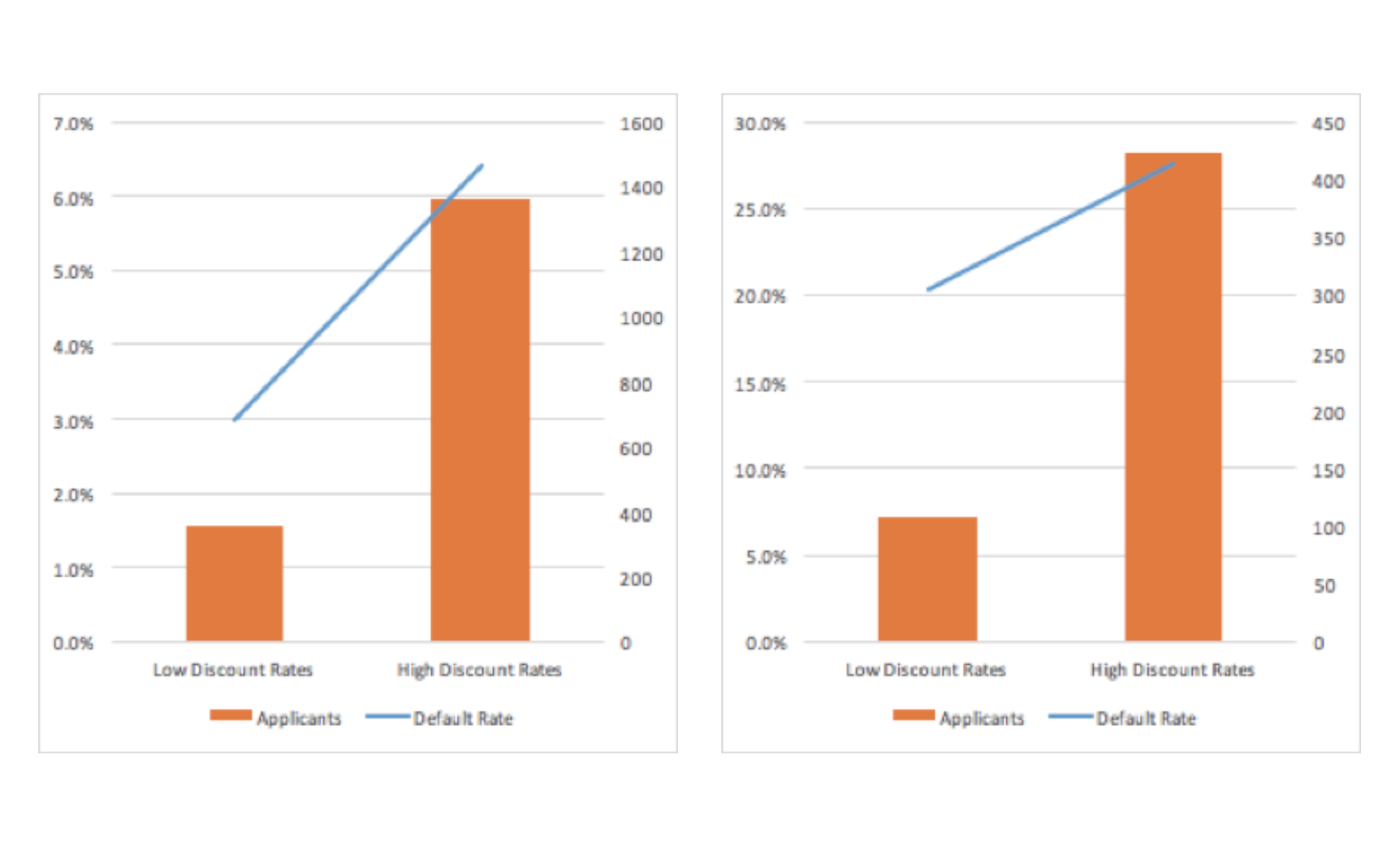 Most of the times traits are not measured in just one exercise within the EFL credit assessment but in many across the assessment. These two examples show intuitively how different insights from an applicant can actually be used to predict credit risk.

Our models generally rely on 10 to 12 specific traits. We found that some populations reveal more information about themselves than others which means our credit models work differently for different segments, but when financial institutions are able to assess enough applicants a predictive model can definitely be built.

How Well Does Psychometric Scoring Work?

The huge advantage of psychometric and behavioral scoring is that it is one hundred percent available: it can be used to score anyone, anywhere, regardless of the technology they have access to. If the applicant is willing to take the assessment they will receive a score.

The predictive power of psychometric and behavioral scoring has been tested in different countries around the world. EFL works with more than 40 different financial institutions and has already helped financial institutions to lend more than 1.6 billion dollars. On average, EFL's clients see a 25 percent median Gini, meaning that the credit models provided by EFL are successfully differentiating credit risk. Numerous case studies can be found at https://www.eflglobal.com/resources/case-studies/.

How Many People Could This Approach Help?

From a technical point of view there’s no limitation to the impact of the psychometric assessment. The main limitation seen today is operational. When the assessment is taken in branches or during sales visits, volumes depend on a bank’s physical infrastructure. However, nothing prevents the assessment from being taken online. Internal results show that predictive power is actually increased when the assessment is taken online without the presence of a sales person helping an applicant. As financial institutions become more digital this approach could grow exponentially.

Limitations that could appear in the future center mainly on regulations. Regulations around loan rejection reasons are growing in different markets. For alternative data scoring this could be problematic. Traditional scoring associated with bureau data has easy ways to explain why applicants are rejected for loans. If someone doesn’t pay a credit card for three months, it’s likely a new credit or loan won’t be issued under that person’s name. When scoring depends on personality insights or social media activity, reasons become blurrier and reputational risks rise.

Traditional methods will exclude many applicants looking for financial access. That is seen today as many consumers and entrepreneurs cannot access loans. Regulations need to be more flexible with these methods until there’s a global recognition that additional, alternative data sources are as valuable as financial data to assess creditworthiness. Regulations will need to evolve to allow new, alternative methods to unlock access to credit in new ways to solve an important global problem we face today.