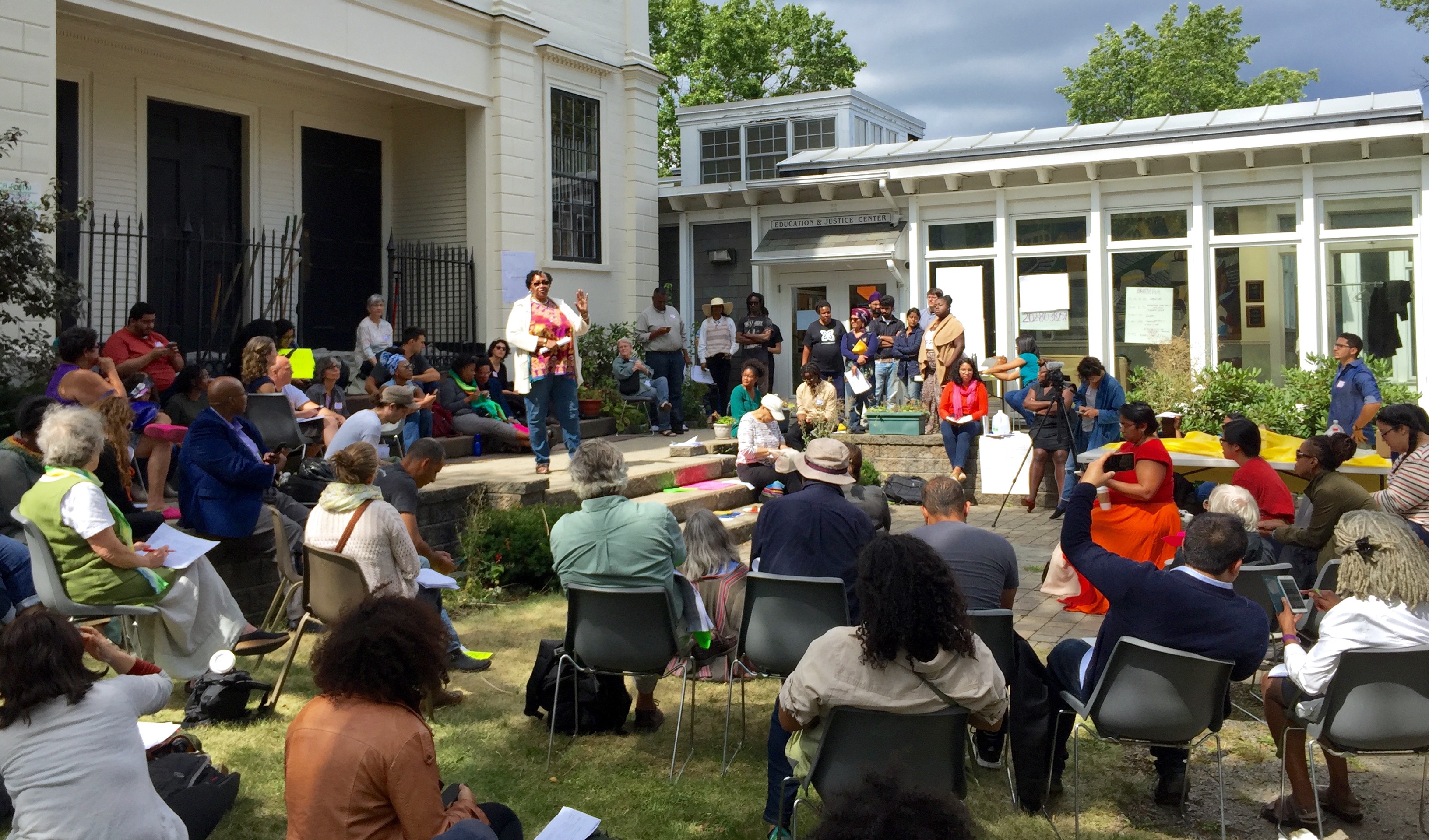 How do we revitalize working class neighborhoods without allowing development to displace the communities who call those neighborhoods home? In the context of Boston’s development boom, this question invites no easy solutions.

One local group believes an answer lies with Boston’s working class communities themselves and is building a local pilot to prove it. Alongside Boston’s influx of new residents and private developers, Boston Ujima Project is charting a unique approach to economic development. By amplifying the voices of historically under-recognized communities, leveraging their knowledge of their own neighborhoods, and organizing the resources they need to grow community ownership and wealth, Ujima is helping to build a more inclusive future for Boston.

The pilot is part of Ujima’s larger vision for how to create an inclusive economy for all. By fostering a democratic culture and building new democratic infrastructure, Ujima plans to model a local economy that is, by design, more accountable to working class communities of color than to the wealthy investors and developers that drive our economy today.

In the sections below, we explore three of the innovations underlying Boston Ujima Project’s cooperative economics infrastructure.

In addition to providing necessary capital, investors can often influence agendas and decision-making, both directly and indirectly. In recognition of the many roles that capital providers can play, Ujima is part of a larger movement to expand access to investing to everyone. By lowering the barriers to invest, we can diversify ownership and stakeholdership in companies and in the neighborhoods where those companies operate. In 2018, Ujima will launch a Community Capital Fund that allows local community members, including youth, to invest as little as $50 in the Fund and to help decide where in Boston the crowdfunded dollars should go.

Crowdfunding for grant and debt financing was popularized by websites like Kiva and Kickstarter, but it wasn’t until May 2016 that crowdfunded equity investing was made accessible by the passage of the Jumpstart Our Business Startups Act (JOBS Act) and Regulation Crowdfunding rules. The JOBS Act is intended to encourage funding for small businesses across the U.S. Its passage has enabled the rise of hundreds of online equity fundraising platforms such as Wefunder, which supports start-up businesses with a minimum investment amount of $100; Republic.co, which provides mission-oriented investor groups and allows for equity investments as low as $10 in a limited set of pre-vetted businesses; and Fundrise, which enables investments of $500 or more in private real estate projects.

While some crowdfunding websites highlight the civic benefits and social impacts of opening up debt and equity markets to the untapped world of small investors (one such platform is Neighborly, which has created an online debt market for Municipal Bonds, with a minimum of $5,000 investment), the equity investment crowdfunding sites more often advertise their impact as opening the doors of investing and empowering regular people to “shape social change and drive economic value” as angel investors, like Republic.co says on their website. Previous to the JOBS Act, only investors with a net worth of at least $1 million or $200,000 in annual income could gain the accreditation necessary to invest. Crowdfunding is indeed a new frontier in raising capital, deserving of the title, given by Goldman Sachs, of being “potentially the most disruptive” new model in finance today (The Future of Finance, Part III, March 2015. pg. 10).

Crowdfunding platforms enable a new generation of unaccredited investors to drive small business development, yet they preserve the fundamental relationship between the influence of the investor and the amount of capital they can afford to invest. If crowdfunding enables us to think of regular people’s investment choices as a vote for one start-up business over another -- and for the type of businesses they want to see in their neighborhood -- then, within the world of crowdfunding today, a single “vote” from an investor with $5,000 speaks as loudly as one hundred “votes” from individuals with only $50 to invest. Put simply, your voice is only as loud as your pocketbook allows.

Crowdfunding platforms suggest that the ability to invest can be as powerful as the right to vote, and Ujima seeks to take this democratic ideal one step further. Rather than adopting the finance paradigm, Ujima suggests that we draw our model of stakeholdership from our political system instead. Ujima’s Fund decouples the degree of each investor’s influence from the amount they have invested in the fund. Instead, every Boston resident who joins Ujima has an equal vote in where the Fund allocates its dollars, regardless of the amount of money they have invested. Non-Boston residents are also welcome to invest, but their investments do not come with decision-making power. Rather, their investments amplify the collective allocation decisions made by Boston voters.

Underlying Ujima’s model is the idea that, when it comes to the economic development of a neighborhood, the collective decisions made by local residents with stakes as both investors and neighbors can be more meaningful and better informed than an aggregation of individual decisions by outside investors. Those collective decisions should be informed not only by financial and investment expertise but also by an intimate knowledge of the local business landscape, competition and consumer market.

The question of what such a collective process could look like is explored next.

Ujima is working with the members and leaders of City Life/Vida Urbana, a Boston-based housing justice organization, and other local grassroots partners advocating for economic justice, including Black Economic Justice Institute and Matahari Women Workers’ Center. Together with these grassroots partners, Ujima is organizing assemblies in different neighborhoods to facilitate discussions and decisions about the type of economic development needed in each community.

The assemblies begin with a neighborhood planning process, informed by local planning regulations and economic data. Residents identify existing good businesses they would like Ujima to support, as well as businesses with harmful or extractive practices. Applying the intimate knowledge they have of their community, of their neighborhood’s geography and land use patterns, and of the needs and wishes of their family, friends, and neighbors, residents brainstorm the types of retail businesses, community infrastructure, and real estate projects they would like to help seed and succeed in their neighborhoods.

Ujima collects and analyzes the ideas generated in the neighborhood assemblies. In coordination with a group of local value-aligned entrepreneurs and small business owners, Ujima then issues Requests for Proposals (RFPs) to local entrepreneurs to address the business and development goals of each neighborhood. Applications are evaluated by an investment committee comprised of local mission-aligned investment professionals, and finalists are invited to present at a city-wide general assembly. Local business owners that are part of the Ujima Good Business Alliance can also apply for funding to strengthen their supply chains.

At the general assembly, residents from across the city gather to discuss the needs and interests of the different neighborhoods and to vote on the proposals that best address those needs and align with Good Business Standards developed by the Ujima membership. In addition to allocating capital, members also vote to award a variety of business support resources, including technical assistance, office space, and consumer organizing initiatives. This neighborhood investment process is refined and repeated, with adjustments, a few times a year.

The design of Ujima’s process draws lessons from models of participatory budgeting, also known as PB. PB is a civic innovation that originated in Porto Alegre, Brazil as an experiment in direct democracy at the municipal-scale. From the early 1990s to the mid-2000s, Porto Alegre’s annual city budget was debated and decided upon in an annual PB process involving open facilitated assemblies attended by thousands of residents. A smaller number of residents elected from each district of the city would analyze and systematize the information gathered in the assemblies in order to determine the allocation of city funds towards capital and cultural projects, from sewage and water infrastructure to public school facilities and public marketplaces. More than $160 million dollars were allocated via Porto Alegre’s PB process, accounting for up to 20 percent of the city’s annual budget each year.

With time, Porto Alegre’s facilitated budgeting process and mass participation resulted in unprecedented health and quality-of-life outcomes, widespread civic engagement, transparent and accountable decision-making, and an equitable redistribution of municipal funds to the poorest districts of the city. Participatory budgeting has since been promoted by the World Bank and the United Nations Development Program as a global model for good city governance. More recently, it has been adopted, albeit at a much smaller scale and with inconsistent equity outcomes, by cities in the U.S. including Chicago, New York, and Boston.

Ujima draws on the experiences of these PB processes while centering a vision for an equitable and inclusive local economy. In Ujima’s participatory investment process, community members from Boston’s working class neighborhoods decide together how and when to invest collective capital and resources towards the health and wealth of their communities. The effectiveness of Ujima’s cooperative economics infrastructure builds on the participants’ specific knowledge and long relationship with their neighborhoods, resulting in investments that extend beyond financial interest into people’s love of community and place.

Ujima’s model of place-based investing for economic justice and social good is being built in partnership with a Boston-based impact investing firm. This partnership is explored in the final section.

Local impact investing fund Boston Impact Initiative (BII) is a co-founder of Ujima and itself on the leading edge of the social capital movement. BII is helping to shift the field of impact investing, or investing for social good, beyond traditional categories of Socially Responsible Investing/ESG, which take into consideration how environmental, social, and corporate governance influence the financial performance of an investment. While SRI/ESG are most prominent in the public equities space, Boston Impact Initiative has demonstrated a place-based investment thesis that moves capital from Wall Street to Main Street.

With their initial $5 million pilot fund launched in 2013, BII has helped clarify the importance of local relational investors with the ability to offer a diversity of capital instruments that include planning grants, traditional debt, private equity, and convertible notes. Their integrated approach tailors capital to meet the needs of diverse enterprises at different stages of growth.

Ujima’s growing portfolio overlaps with BII’s on a few local businesses that are modeling what community-driven accountable economic development can look like.

One example is the catering business Fresh Food Generation, which uses ingredients from local companies and farms in Boston and New England to bring fresh and nutritious Caribbean cuisine to neighborhoods with limited healthy food options. Co-founded by two food justice advocates who grew up locally in Roxbury and Somerville, FFG is committed to providing delicious meals that are both affordable and environmentally sustainable.

Taking another approach to expanding food access, the Dorchester Food Co-op is building a worker- and community-owned grocery store in the Dorchester neighborhood. The Co-op is funded and supported by more than 620 owner-members in addition to Ujima, BII and other non-voting investors. Dorchester Food Co-op plans to open their brick and mortar store in 2019. In the meantime, they host educational and cultural events, sell produce at farmers’ markets, and expand the community of supporters invested in their vision for healthy food access and quality job opportunities in Dorchester.

Ujima believes that it is local initiatives and leadership, like these examples above, that will help create a local economy that recirculates value, reinvests in community, and rebuilds wealth in Boston’s working class communities of color.

Ujima’s cooperative economic infrastructure organizes the collective power of residents, businesses and investors to create the inclusive economy we need. To learn more about the Boston Ujima Project, visit www.ujimaboston.com.

Libbie Cohn works as a researcher, filmmaker, and urban planner at the intersection of ecology and economy, with a focus on cooperative economics and democratic processes that advance racial and gender equity. She is a co-founder of Boston Ujima Project and holds a Master’s in City Planning from MIT.